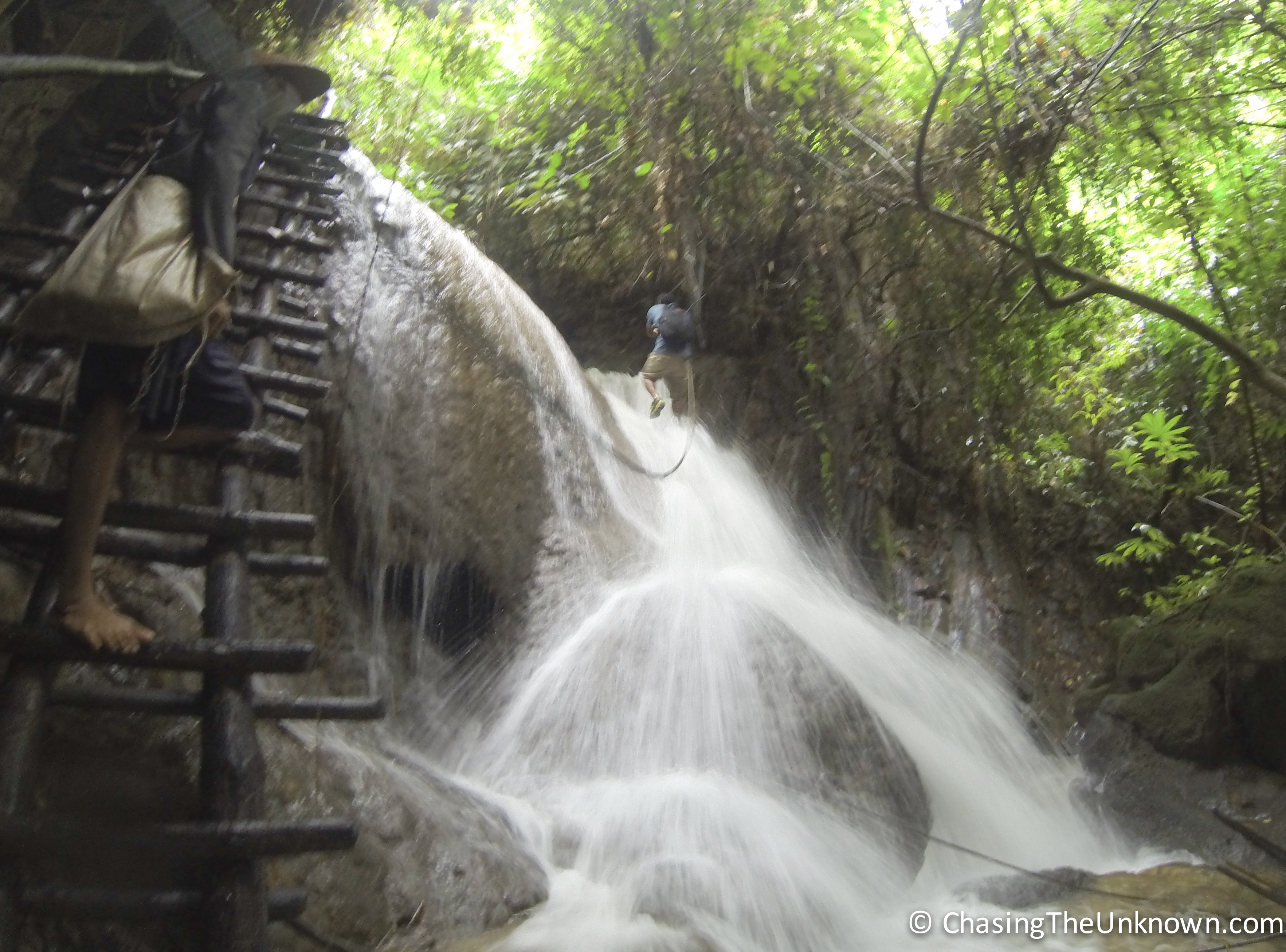 Traveling solo in Laos can be expensive if you want to join any sort of organized activity or tour: prices are determined by the number of people participating and many won’t occur if there are fewer than four people. In the busiest tourist months, this probably isn’t an issue but in rainy season, which is now, it is. In Vang Vieng, I went to multiple offices to find one that had enough people signed up for a day of kayaking that I could join. In Nong Khiaw, which sees far fewer tourists than Vang Vieng, I knew that if I wanted to do any sort of guided trekking, I’d have to take what I could get. So the day after I arrived, I found myself trudging through mud, yanking leeches off my ankles, and scrambling up waterfalls. 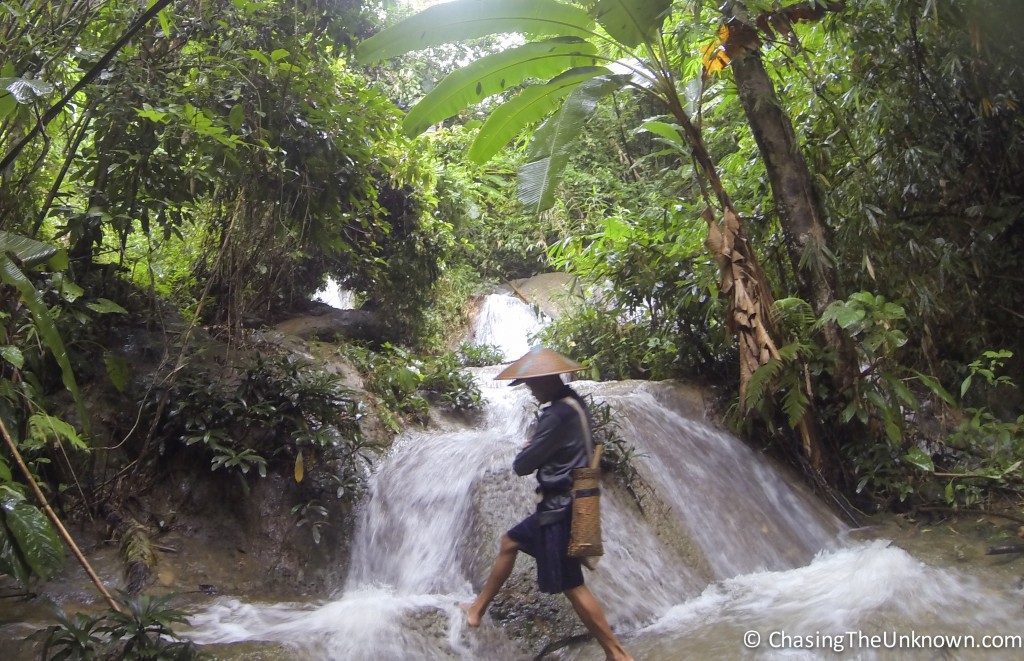 The “100 Waterfalls” trek offered by Tiger Trails is marketed as “the best trek in Laos.” I have no idea if that’s true but if it is, I’m glad I didn’t spend money on any other guided treks there. Climbing the waterfalls was fun, no doubt about that. And on a sunny day, I expect the cold water feels refreshing and clothes dry during the walk back down to the river. The views of limestone mountains and rice fields are nice if you can manage to look up from the dangerously slippery path. But if I’m honest, the day was a little disappointing for me – this is probably more about my need at the time to recharge myself than it is about the trek itself. Coming up from Luang Prabang where I’d just had a great day at Kuang Si waterfall, I was hoping for a day to sit by the river, catch up on my journal, and generally take it easy. But it was unlikely a group of sufficient size would materialize the following day for any sort of trek so I postponed my day of rest. And for the first part of the day, I did enjoy myself. 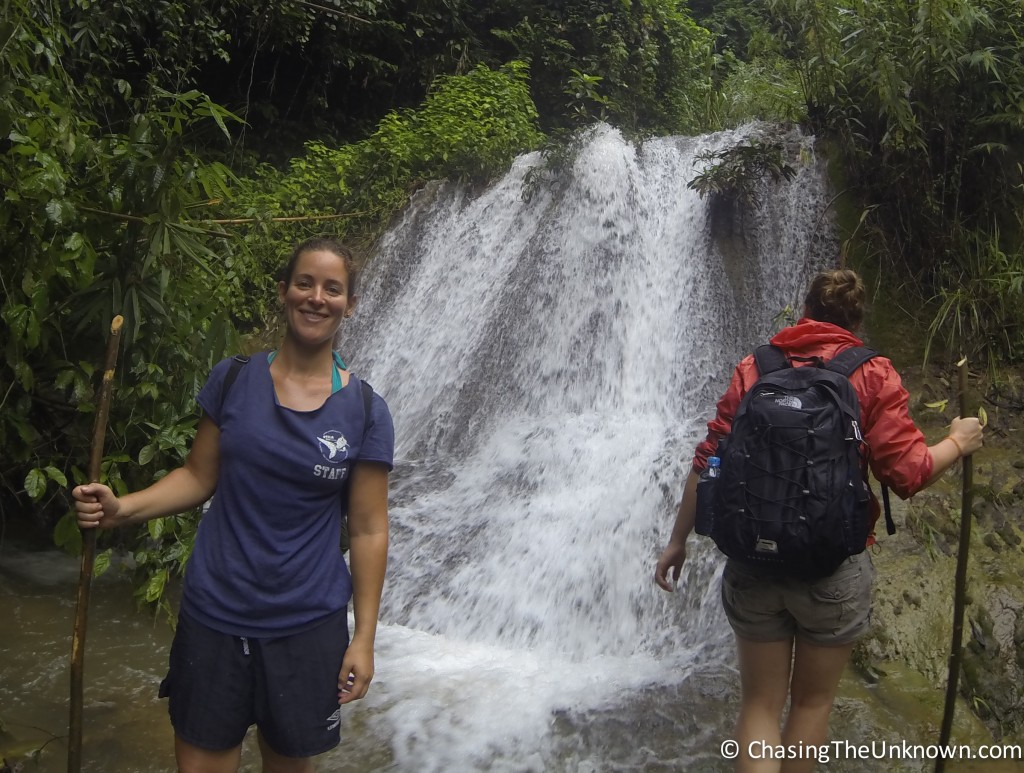 The trek began with a 1-hour longtail boat ride down the Nam Ou River. It was pouring when our group assembled and the boat’s owner failed to put the roof on. After about an hour of waiting, it was evident that no roof would be appearing. Umbrellas were provided for those who had chosen not to bring one (who wants to carry an umbrella on a full-day trek?) and we set out. The boat docked at a small village our guide said we’d have time to tour after the trek but alas, that was not to be. I was hoping to nose around a bit, maybe talk to some of the residents but with our delay in leaving Nong Khiaw, we never had the chance. Walking sticks issued and non-English speaking local guide leading, we set out across fields and through streams. Muddy but fairly flat and leech-free for the first stretch, this was a pleasant start to the trek. 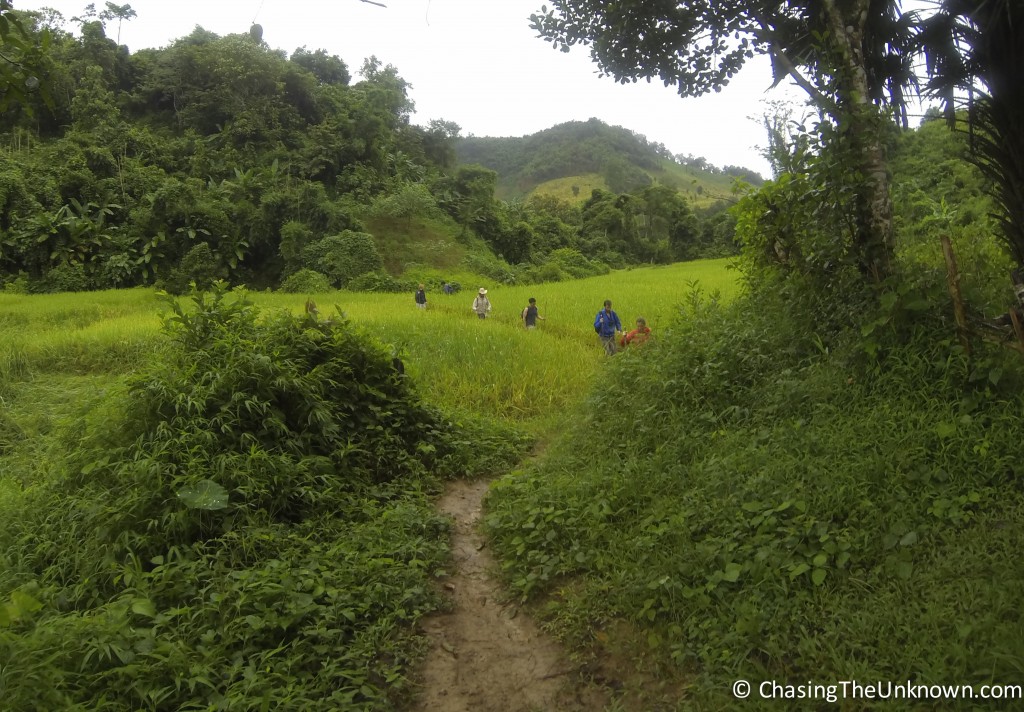 After nearly an hour of walking, we reached the base of the waterfalls. With no leeches in the falls and the rock surprisingly easy to grip, we walked, scrambled, and otherwise climbed our way up one waterfall to the next. The thick jungle cover shaded us from the weak sun and our group of six moved at a decent pace through the cascades. 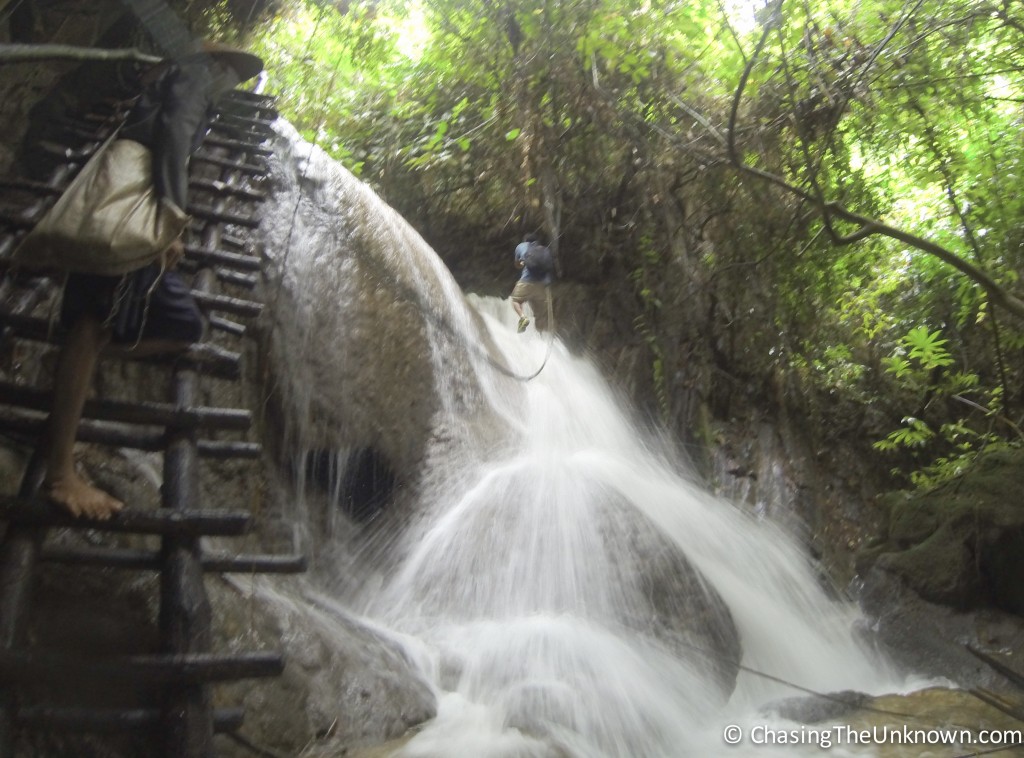 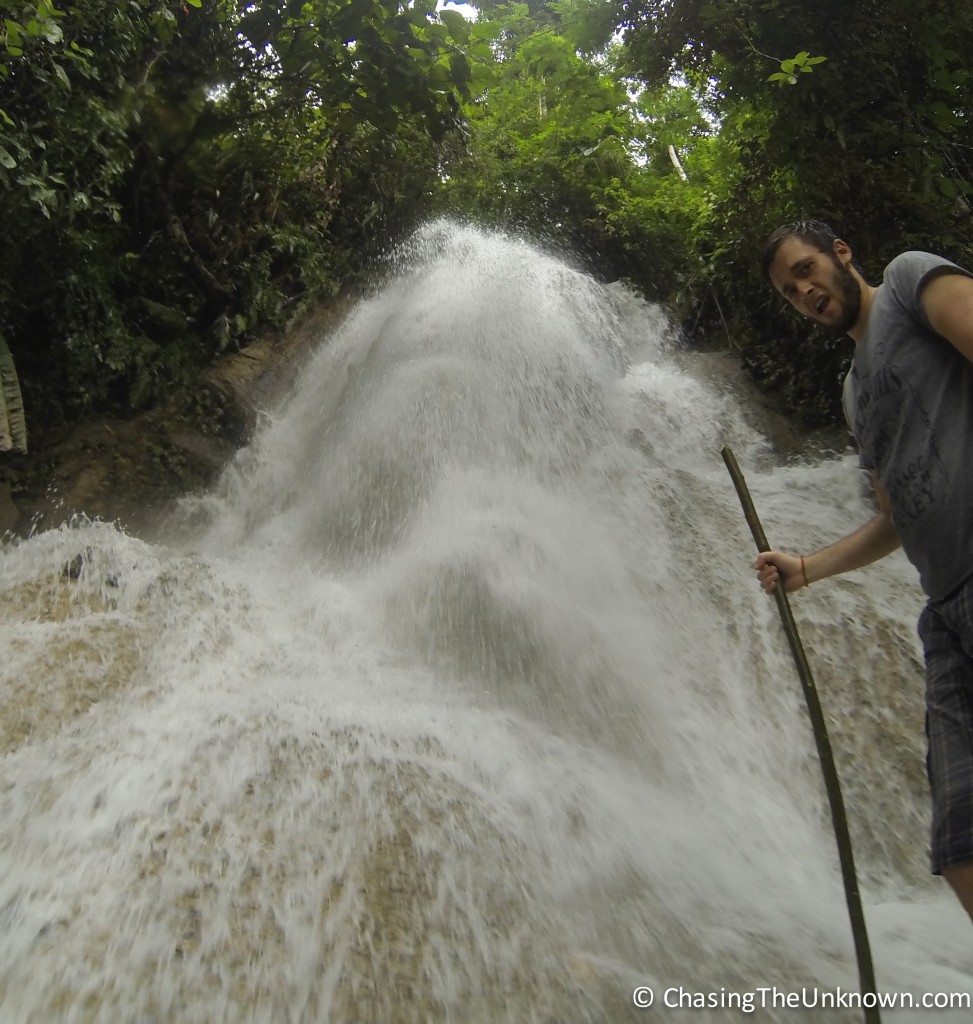 Lunch was served at the top, looking over the mountains with the falls pounding beside us. 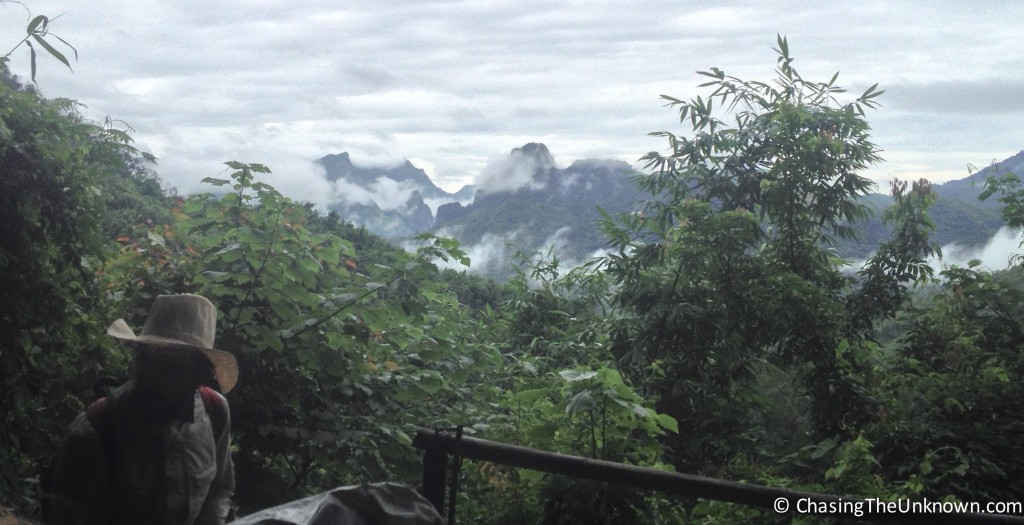 To this point, I was having a great time, grinning more often than not. Then we began the descent. A separate path winds through the jungle into open fields so we weren’t sliding back through the waterfalls. Instead, we tottered down slopes of glistening mud while leeches slithered up our ankles and mosquitoes taunted us by landing any time we turned our attention to leech removal. It was, for me, an exhausting hike down. We were slow-moving, each of us trying to find solid footing but not wanting to stop too long given the chances for blood-letting and bites. Throughout the day, five of the six of us fell at least once (I fell twice but the time I fell in a waterfall was just plain fun). No one was injured but there was plenty of blood thanks to the leeches. Our local guide sped along, only two or three of our group able to keep up at any given time. With others straggling behind, we were separated and at one point, I found myself between groups, neither one in sight as I pondered a fork in the paths. In that moment, I realized how important it is to know the names of everyone I’m spending a day with – or to be sure that they understand the appropriate response to a call of “Marco!” from an unseen voice. Fortunately, having had lunch with this crew the day before, I knew all of their names and a quick call to one of the two ahead set me on the correct trail.

By the time we returned to the village, we had only a few moments to collect ourselves (and for some to remove leeches from feet and legs previously covered by shoes and pants) before piling back into the boat. By law, we had to be off the water by 5pm so we rushed back to Nong Khiaw, the rain returning as we motored north. It was a full day that I finished with aching knees and a sore back, feeling older than my 35 years. I don’t regret spending the money and time on the 100 Waterfalls trek but I’m not sure I’d recommend it during rainy season. It should be a fun day with a chance to soak in the beauty of the area, interact with villagers, and relish the cool clear water tumbling down the rocks; not one spent precariously slipping down muddy paths, eyes glued to the ground searching for footholds. If you do make the trek and locals say leeches are afoot, I suggest the oh-so-fashionable attire of shorts, light-colored socks, and trekking sandals. Leeches are easy to spot on the outside of socks or on bare legs and can be pulled away before they latch on to skin. Long pants – regardless whether tucked into socks – only hide the little buggers and everyone I saw who tried this strategy in Laos had a few unpleasant surprises at the end of the day.

Have you done the 100 Waterfalls trek? What did you think? I’d love to hear from someone else who’s done it, regardless the time of year!