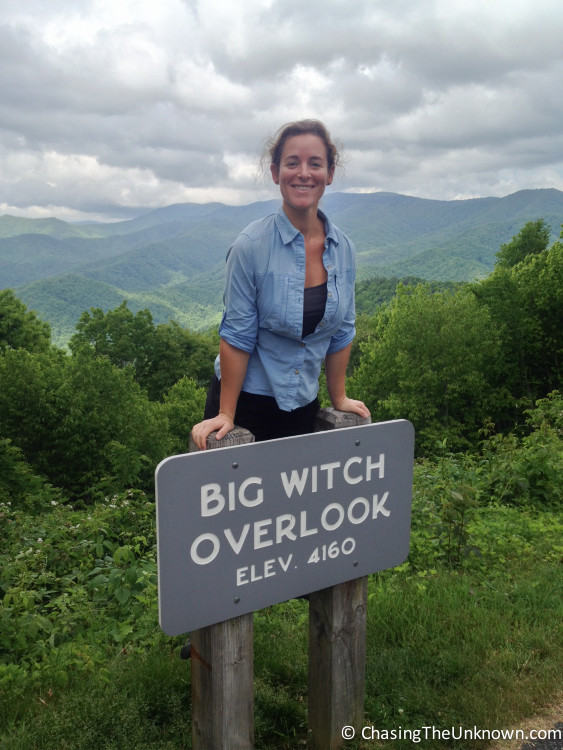 Nearly every summer my parents drive from their home in North Carolina to my brother’s in Colorado. Taking major highways would mean about 1800 miles of white-knuckle driving beside huge trucks. Nearly identical rest areas would blend together in one’s memories and the trip would be solely about the destination. Fortunately, my parents don’t take that sort of road trip. No, they take minor roads and detours that allow for seeing interesting places and things and they avoid interstates as much as possible. When I joined them for the drive this summer, they were kind enough to give me a vote in the route. As happens with any good road trip, we made changes along the way but had a few scenic drives and stops mapped out in advance.

Our first day’s destination was the college town of Boone, NC, from where we could take the Blue Ridge Parkway west to Asheville, a city I’ve wanted to see for years. If I decided to live in North Carolina, Asheville is probably where I’d choose to be. But I don’t want to live in the Tar Heel State so that isn’t saying much. Asheville has the most charm of any city I’ve seen in North Carolina and I’m not knocking it, I just don’t have much to say about it. Of more enjoyment was our visit to Grandfather Mountain.

At just under 5,946 feet (1,812 m), it isn’t the highest mountain I’ve visited but it’s the only one I’ve ascended while listening to a CD included with the price of admission.

Yes, if you wish to visit the “travel attraction” that is Grandfather Mountain, you’ll need a ticket. There are two free entrances for hikers but everyone else over the age of 3 has to pay between $9 and $20 depending on age. Discount tickets are available in the town of Boone. Like most visitors, we drove up the mountain, listening to the soothing voice of a Southern gentleman inform us where the good views are, what flowers are in bloom at a given time of year, and otherwise educate us about the State Park. It’s home to an annual Highland Games, complete with kilts, bagpipes, sheep herding, and highland wrestling. About five seconds of the movie Forest Gump were filmed on Grandfather Mountain (starts at 3:58 in this clip). The crown jewel is the Mile High Swinging Bridge, the highest suspension footbridge in the U.S. at, you guessed it, a mile above sea level. Once across it, one can scramble about on some rocks and check out the views. One of the mountain’s trails runs underneath the bridge and my mother joined me in walking down a stretch of it. Until this trip, I’d never seen the Blue Ridge Mountains and although they lack the grandeur of the Rockies, I can’t deny their beauty.

We were fortunate to have sun the day we visited Grandfather Mountain as the next morning was rainy and grey. On the two-lane Blue Ridge Parkway, this meant driving through fog so thick I couldn’t always see painted lines or the edge of the cliff beside me. After the winding curves of New Zealand roads and the harrowing experience that is the Homer Tunnel, I was remarkably calm for this patch of driving. And eventually the weather cleared and we were able to appreciate the views that motivated us to take the parkway.

Back in 2011, I read this article in The New Yorker about Crystal Bridges Museum of American Art in Bentonville, Arkansas. I immediately added it to my internal list of places to visit someday. Admittedly, this is partly because it’s a good excuse to visit Arkansas, a state I’d never seen. But I was also curious about the collection begun by Alice Walton, daughter of Walmart founder Sam Walton. And the architecture: a museum built in a ravine in the Ozarks with structures that resemble armadillo shells? Walkways and paths to enjoy the outdoors with a picnic on a break from looking at art? Clearly this would be a museum unlike others. 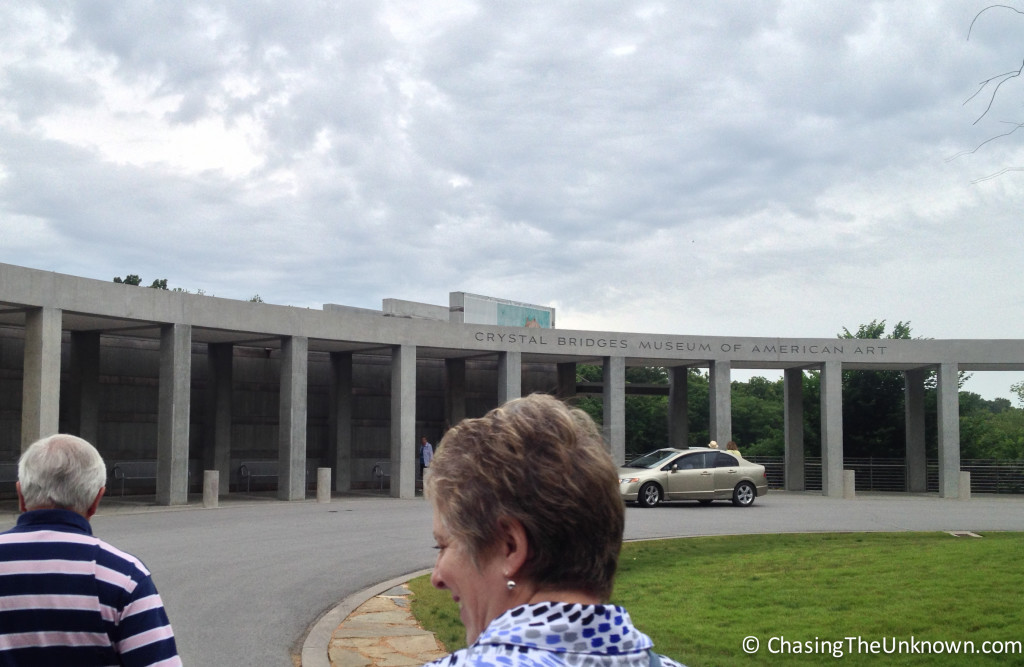 In the years since, my parents have visited Bentonville and the museum, each time having truly enjoyed the experience. They were gracious enough to build in some time for a stop there so I could check it out. The sky opened up with rain shortly after we arrived so I didn’t have a chance to explore the many paths or to walk around the quaint downtown square of Bentonville. But I got a sense of the structures and wandered the collection of American art. It’s arranged chronologically and we started with the most contemporary pieces, working our way back to the earliest work, dated circa 1675. It’s an impressive collection, even without the special exhibits on offer. Admission and WiFi are free, as is an app that provides information about myriad paintings and sculptures. Headphones can be borrowed if you don’t have your own. 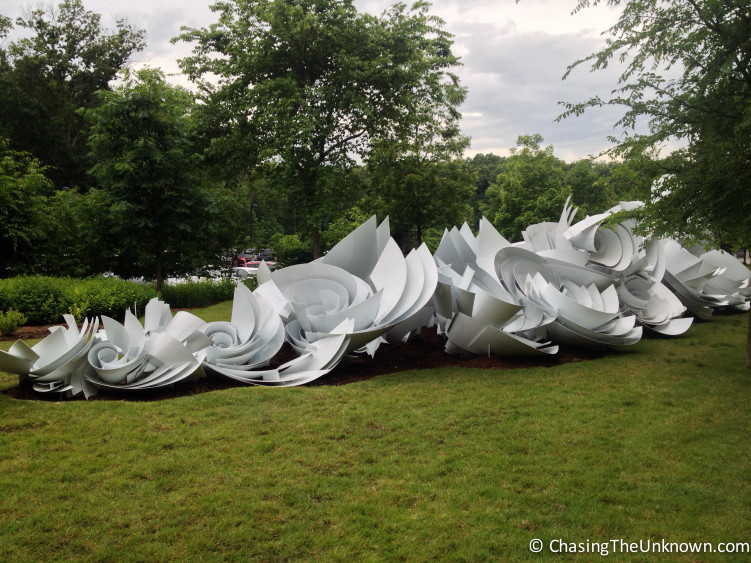 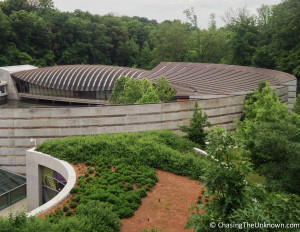 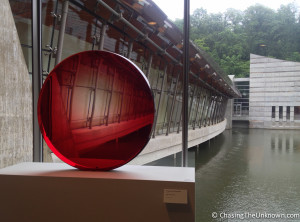 I’m not a fan of Walmart but I have to thank Alice Walton for creating Crystal Bridges. Not only does it provide a part of the country not well known for art and culture with a world class museum, it has made a piece of Arkansas attractive to many of us who would otherwise avoid the state. If you ever have a chance, I highly recommend a visit.

From Bentonville, our route was made up on the fly. We stopped at Salt Plains National Wildlife Refuge in Oklahoma where we were attacked by swarms of non-biting but annoying insects. The largest “saline flat in the central lowlands of North America,” it’s home to selenite crystals with hourglass inclusions. Although the information center was supposed to be open when we arrived, we saw no staff and no other visitors. The walking trails were closed and signs pointing to restrooms led to what looked like private homes. The whole experience was just plain odd.

Much more satisfying was our visit to Greensburg, Kansas. Greensburg showed up on our radar as being host to the “World’s Largest Hand Dug Well.” At 32 ft/9.75m in diameter and 109 ft/33m deep, it’s not actually the largest hand dug well in the world. But I suspect the builders back in 1887-88 weren’t entirely aware of what existed on other continents so I’ll forgive them their false advertising. It’s now referred to as the Big Well. An onsite museum provides a short history lesson on the town of Greensburg and the well itself but also showcases what Greensburg has become since it was destroyed on May 4, 2007. On that day, a tornado ranked EF5 on the Enhanced Fujita Scale (the strongest category of tornadoes) laid waste to the entire town, destroying 95% of the town’s buildings and killing 13 people. Injuries and damage to other residents and the remaining structures were numerous and grave. In a town of only 1,600, the resources to provide relief shelter were nearly non-existent and about half the population relocated. Those who stayed saw the opportunity to rebuild their town into something better than the simple farm town it had been. Today, it has the most LEED certified buildings per capita in the world, the entire town’s electricity is wind generated, and it was the first city in the U.S. to use only LED streetlights. Sustainability has put Greensburg on the map for something other than the Big Well and approximately half of the Big Well Museum is dedicated to sustainable building practices and techniques. The display of materials and information provided is excellent and easy to understand. I hate that a natural disaster was necessary for any town in our nation to become as “green” as Greensburg but I love that people turned a tragedy into an opportunity. I wish more municipalities would get on board with the environmentally responsible thinking that now pervades Greensburg.

From Greensburg we headed to Colorado where I spent more than a month catching up with family and friends. Many thanks to my parents for taking me along and humoring my wishes to stop in random places. I picked up two states I hadn’t previously seen, Tennessee and Arkansas, one of which deserves more of my time, and got some quality time with my folks. Not as epic a road trip as two months in a van in New Zealand but one I’m happy to have taken.

How about you? Any favorite U.S. road trips you’ve taken? Ones I should consider next time I’m in the States?

2 thoughts on “2100 Miles Across the Southeastern US”