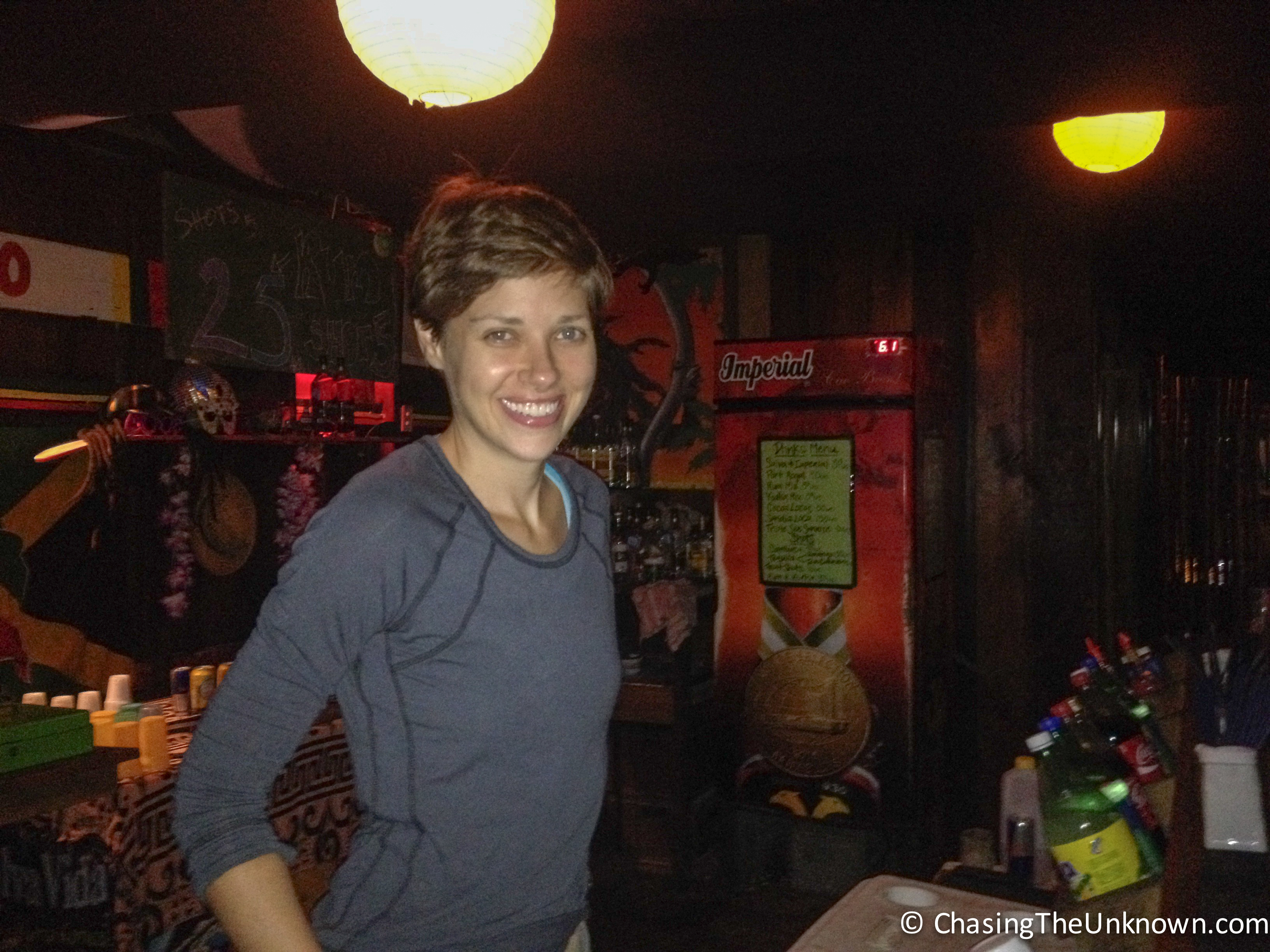 The following post was written by a former contributor to Chasing the Unknown. The views expressed are not those of the site’s owner.

Three months ago, I would have never imagined that I would be walking home through Utila Town at 5am from my job as a bartender at an “after party bar (read: gets busy at 12:30am and the dance party doesn’t stop till after 4am),” named Coco Loco. As I walk though town, I duck to avoid low flying bats, and leap around trash on the road because a stray dog has knocked over the garbage can and is literally half-inside of it eating something disgusting. I smell like an odd mixture of cigarette smoke, weed, sweat, and rum (most of which was not consumed or produced by me), which has become an occupational hazard and necessitates a cold shower before bed (which will be after 5am).  I’m exhausted, but also still pumped and exhilarated from the adrenaline produced working nonstop for 8 hours straight, opening beers, pouring rum drinks, talking with patrons, and dancing behind the bar to the top 40 dance hits (I can’t even escape Miley Cyrus in Honduras!). The night also consists of me downing cans of Red Bull to stay awake and drinking shots that friends and customers have bought for me.

Ever since I was 18, I’ve wanted to become a bartender, but not seriously enough to pursue it until I was 29. There was something so cool about how the (good) bartenders commanded the bar, knew how to mix drinks with efficiency, grace, and a little bit of flare. While temporarily unemployed in 2009, I took a week-long bartending class at DrinkMaster Bartending School in Boston, with the hope of landing a job. While I wasn’t able to professionally bartend during that time (due to no actual experience), I learned some valuable skills that I used at our various house parties. Once we arrived on Utila, I had heard that bars frequently hired backpackers to bartend, as long as you were staying around for at least a month or so. After striking out at a couple of bars, I was walking down the main road and saw a guy writing on a chalkboard sign advertising 25 lempira beer and 5 lempira (aka lmps) shots ($1.25 and $0.25, respectively) for a bar that was way back down a path, essentially on a dock over the water. I assumed that he was the owner of the bar and asked if he needed a bartender. He (Cala) brought me back to the bar and had me talk to his wife (Paola), who informed me that she was just about to go to the dive centers to find a new bartender. She was impressed with my bartending school training in the States and hired me on the spot.

I started with two shifts a week: Thursday and Saturdays, starting at 9pm and ending when the bar closed, which was usually around 4:30am (I then progressed to working Mondays, too). The job was not difficult. The hardest parts were deciphering orders given in Spanish (the fact that “limon” in Spanish means lime was quite confusing initially) over the blasting (mostly) terrible music, staying awake at 3am, keeping ants and geckos from crawling in the open cans of ginger ale, and dealing with over-served patrons whom we could not cut off (“We don’t cut off locals; it’s not good for business,” Cala would say). I attempted to cut off a Utilan one night because he was severely slurring his speech, falling off bar stools, spilling drinks, and shouting nonsense. Let’s just say it ended with him getting pepper sprayed, a cigarette flicked in his eye, and him being forceably removed from the bar – which took three attempts.

The drink options at the bar were not elaborate. The most popular libations were beer (Salva Vida) and rum drinks.  I don’t blame the patrons for wanting rum drinks. The rum in Honduras is really good. The standard rum is Nicaraguan 4 year old Flor De Cana and our bar served rum drinks for 30 lmps [$1.50] (25 lmps [$1.25] on Thursday nights). The four Honduran beers are Salva Vida (most popular and mainstream), Imperial (malty), Port Royal (“Belgian Style” lager, the foamiest beer in the world), and Barena (looks like Corona). I was partial to Barena, but in truth, none of them were all that good. Other liquors available: vodka, gin, tequila (Jose Cuervo was our “pricier” tequila at $2.00; Durango was the standard at $1.50), sambuca, Jagermeister, triple sec, and a random bottle of creme de menthe. Mixers include water, Coke, Sprite, Fresca, pineapple juice, orange juice, cranberry juice, tonic water, ginger ale, and Red Bull. The most elaborate drink (and the bar’s signature drink) served is a Coco Loco: fresh coconut water, rum, sugar, and ice blended up and funneled back into a coconut. They are delicious but a bitch to make and (thankfully) not ordered very often.  They are also pricier at 50 lmps ($2.50).

Coco Loco offered specials (discounts) each night, but one constant special were the 5 lmps fruit shots. These consisted of a very cheap white rum called Aguardiente (a compound word that combines the words in Latin-based languages for “water” and “fiery”. A similar English-based term is the slang “firewater”) and Latin-flavored Tang. Flavors included tamarind, peach, hibiscus, pineapple, guava, and passion fruit. As you may imagine, these shots were very popular, not for their taste but because of the fact that you could get pretty drunk for $1.00. Many of our friends from Utila Dive Center would come to the bar to party and hang out with me. Jason (as mentioned in this post), always ordered the fruit shots for everybody and one night he even ran us out of them.

Since Coco Loco was known as an after-party bar, the first few hours of my shift were always slow. So slow, in fact, that there were some nights when my bosses would leave for a late dinner and not a soul would enter the bar for 2 hours. I’d just sit there playing games on my iPhone, reading books, doing push-ups on the bar, dancing with myself and other ridiculous things you do when you’re all by yourself. But by about 12 or 1 am, the bar would get slammed and I’d be working hard. Luckily I was taught well how to pour drinks without wasting time, remember complicated orders, and make change quickly. Even though I could drink for free while working, I never got drunk behind the bar and kept a 4 drink max.

During the five weeks working there, I got to know many of the locals and regulars – which, of course, was good and bad. There was one regular who came in every single night I worked, drank about 6 Salva Vidas, stared at me for a while, got excited when I danced, and requested that I shake my booty more. “You are so beautiful, why don’t you marry me?” he’d say. I’d point to the ring on my left ring finger and say, “sorry, I’m already married!” He’d reply with, “well I am, too!” and point to his beer and his cigarettes. I made a point to chat with everyone I could at the bar and I met people from around the world.

There may be laws on the books in Utila, but very few of them are actually enforced. Drugs are prevalent,  inexpensive, and apparently of very good purity and quality. On my first night of work, I was offered cocaine three times by three different people. The bartender I was working with would frequently take breaks to the bathroom to do a line. Most nights, patrons would roll joints on the bar. People would also do lines of cocaine on the bar. One night, a sketchy looking local ran into the bar all excited and exclaimed “I have marijuana, who wants to buy some?” When a guy did offer to buy it from him, he snatched half of the bag out of the buyer’s hand but was too high/drunk to leave fast enough and a verbal altercation broke out. 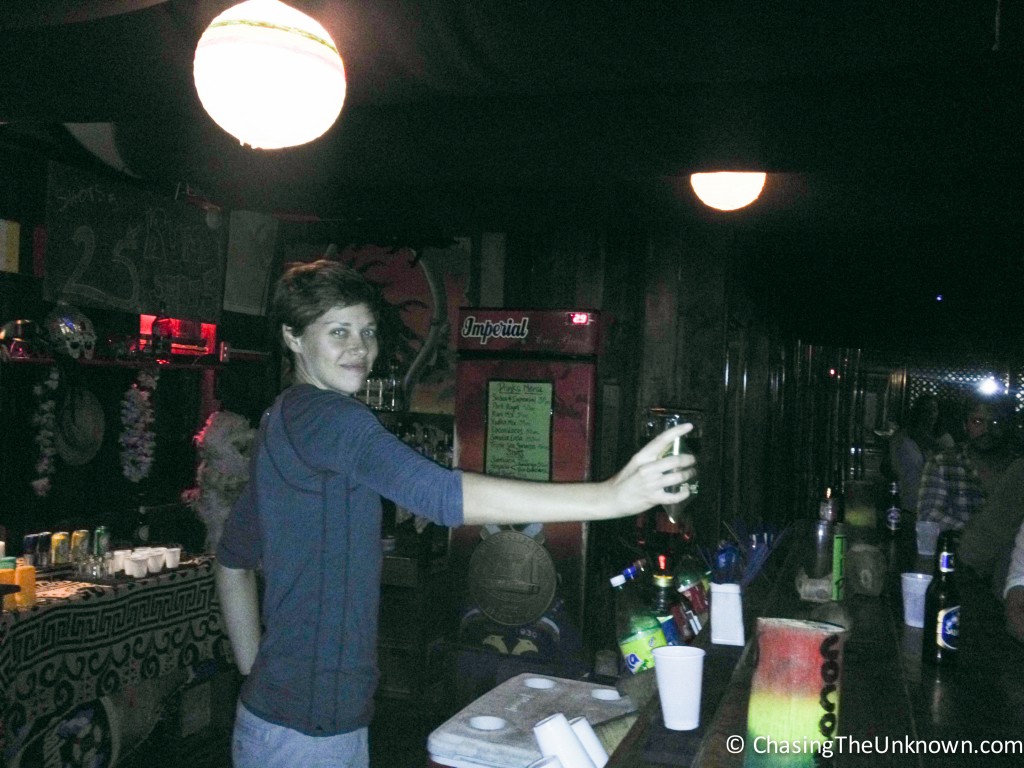 4 thoughts on “Living the Dream: Bartending on Utila”