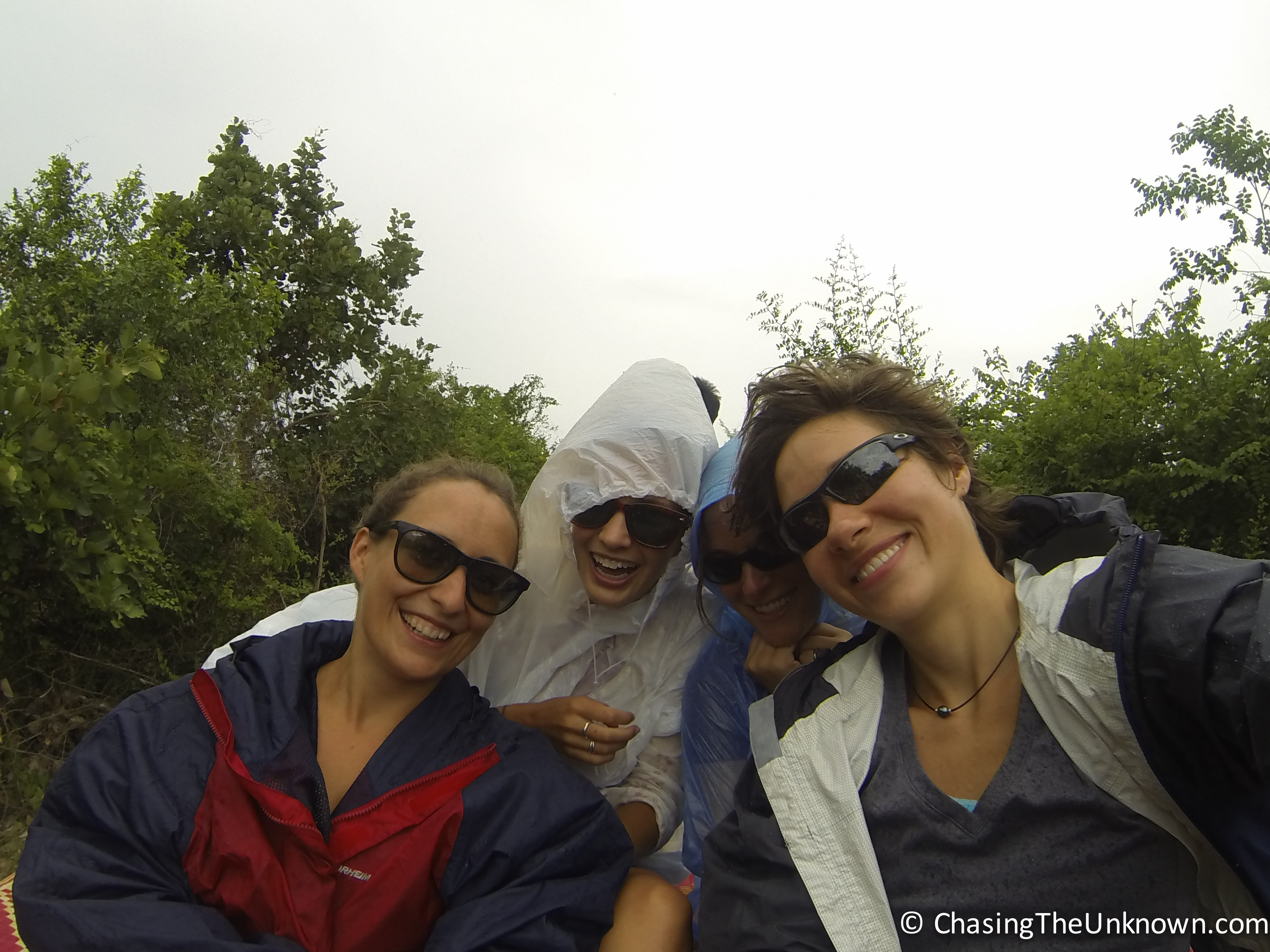 “Where are you thinking of going next?” the woman next to me asked.

“Sihanoukville, then probably Battambang.” I replied.

“Battambang! Are you going to ride the Bamboo Train?”

“Maybe we can ride it together!”

So began a new friendship; and a ride on a small flatbed mounted on two axles, covered with bamboo mats, powered by a tiny motor – or by our driver’s running feet. 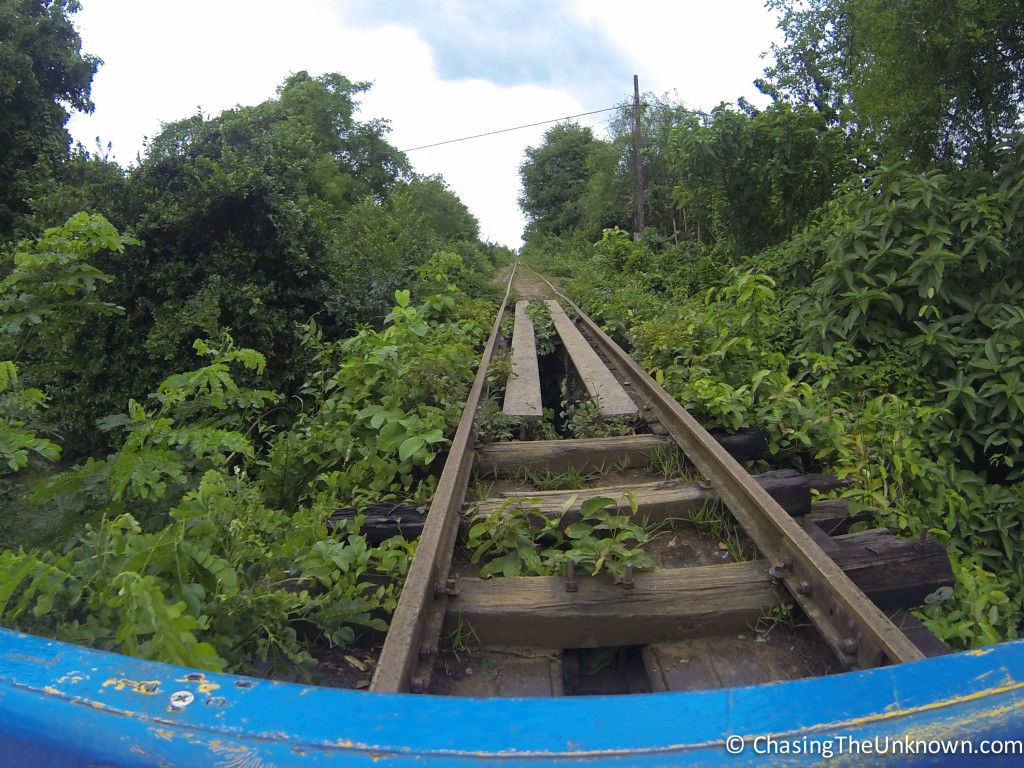 Beginning in the 1930s, trains ran between Cambodia’s major cities and neighboring Thailand along narrow-gauge tracks. They carried food, fuel, supplies, passengers, all the usual railroad cargo. But when the Khmer Rouge took control in the 1970s, the trains were shut down. When service resumed, platforms were mounted at the front of trains for minesweepers (allegedly, passage on one of these platforms was free). In time, the trains were retired and only the flatbed platforms ran the rails, powered by men with long bamboo poles who pushed the car forward along the tracks. Although motors were added, brakes have never been introduced. How fast these “trains” go is a matter of debate with some saying they max out at 20 kilometers per hour and others up to 40. If two trains approach each other, both slow to a stop and one is removed from the track, one piece at a time. When the two cars (each one called a norry) have switched places, the “drivers” reassemble the dismantled train and everyone goes on his way. A simple system that seems to work pretty well. 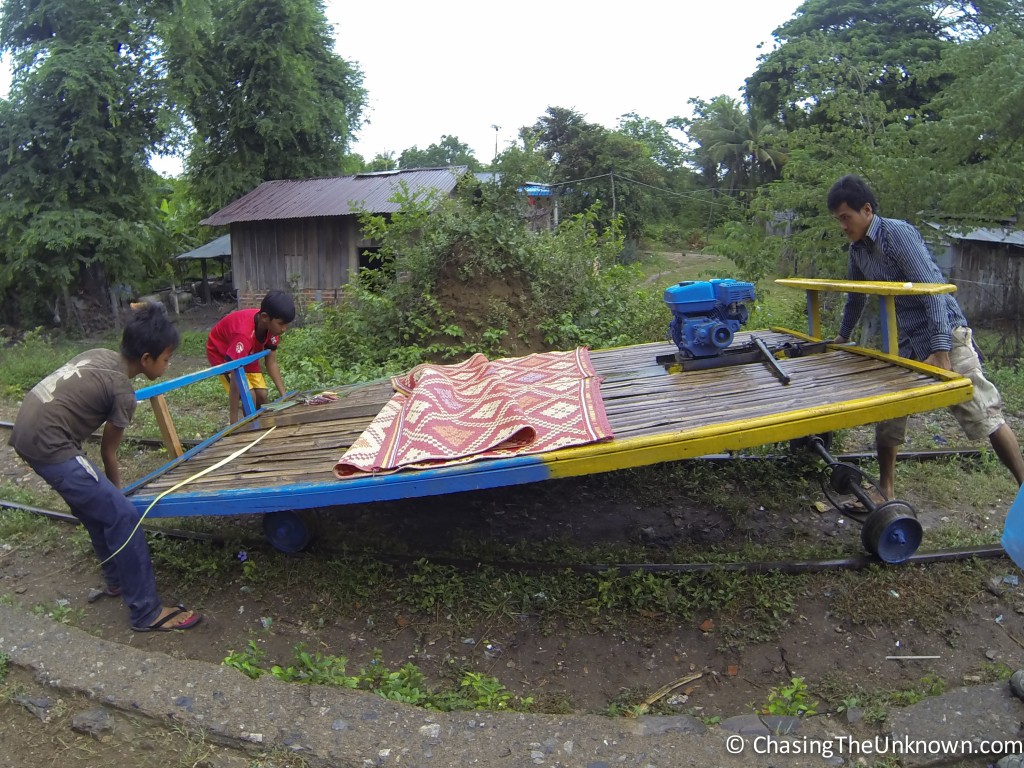 Outside Battambang in western Cambodia, a portion of track is still used by country dwellers when the rains are heavy and the roads turn to mud. In the early 2000s (according to locals who admittedly aren’t the best record-keepers about this sort of thing), tourists discovered that the drivers would give you a ride a few kilometers along the track and back, a unique way to see some of the beautiful countryside in Cambodia’s rice bowl. Not slow to miss an opportunity, area residents quickly turned rides on the bamboo train into a thriving tourist business. Now, for $5, one can hop on a train to ride 7km to a set of shops run by locals hawking t-shirts, scarves, and cold drinks. Children greet each train, handing tourists jewelry and art they’ve made from bamboo (Jen received a grasshopper, I wound up with a ring). They’ll continue to make more as you walk with them, and they’re happy to show you to a nearby brick factory. After a bit, they’ll try to sell you bracelets.

This being the start of rainy season here in Cambodia, there weren’t too many tourists around the day we rode the train. Our ride out was pleasant – a bit bumpy but a good time. When the rain started, we donned our wet-weather gear and had a good laugh at ourselves.

At the end of the line, we were quickly accosted with calls of “you want cold drink?” “t-shirt, scarf, you want cold drink?” Questions we’re accustomed to hearing from the locals trying to make a living off the backpackers and tourists who come through. We milled about in the various shops and chatted with some of the children, eventually following them to the brick factory. 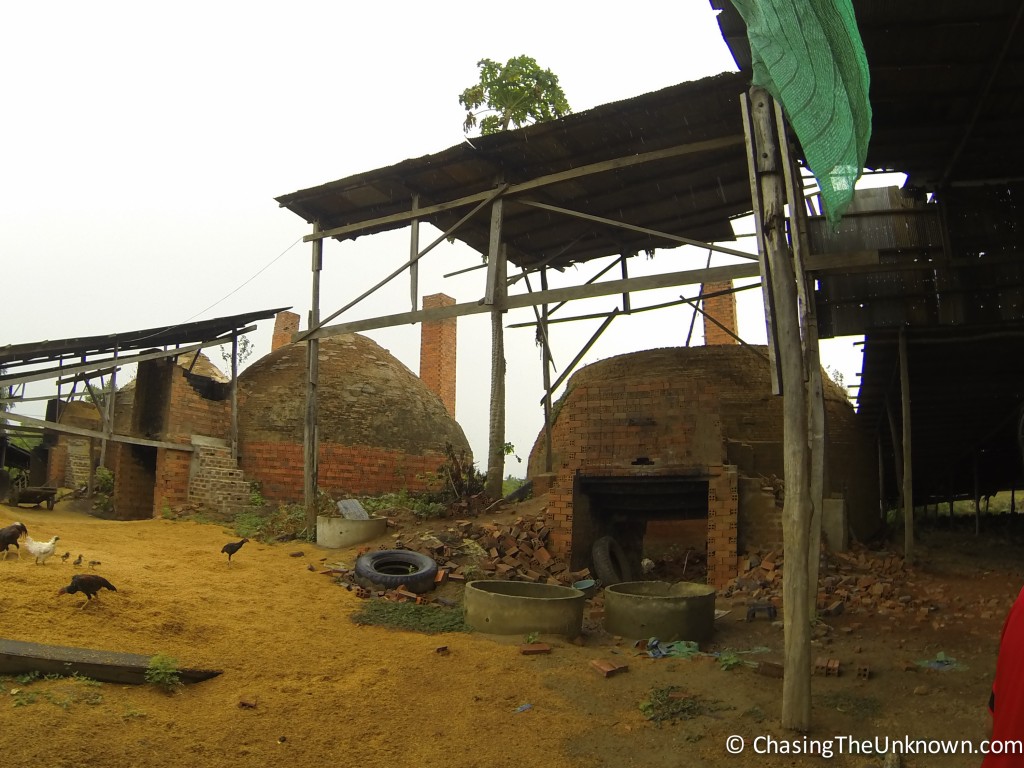 I picked up a few new Khmer phrases and words from one of the boys who stuck to my side for a while. Like most Cambodian children, he attends school in the mornings or afternoons but not both. His English was impressive for a boy his age and he claimed to have learned mostly from tourists. 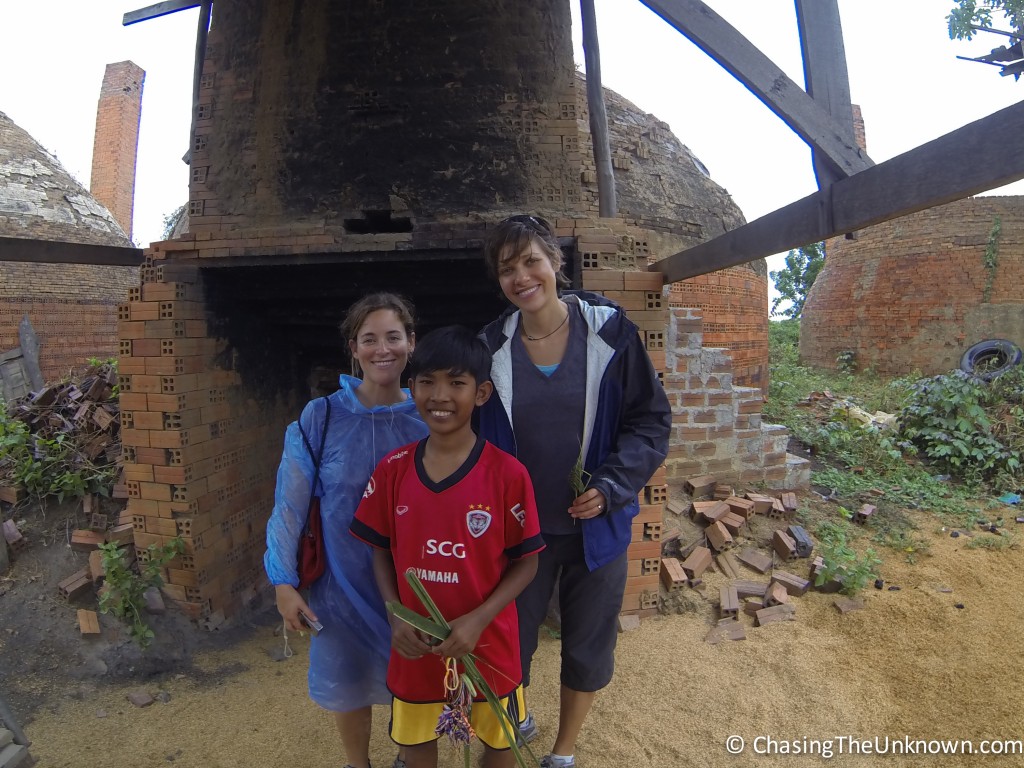 When we boarded our train to return, the engine didn’t start. This is hardly surprising as the rope our driver started the motor with at the other end of the track was still sitting back there, 7 km away. So he started walking, then running, along the track. At times, he stopped and tried to improvise a rope with a swatch of bamboo and we asked if there was any way we could help. Eventually he found a solution and we were off and running. The ride back was wetter and it felt as though we were jostled about more than we were initially. Our bums and backs were sore by the time our ride ended but it was well worth it.

Rumor has it that real trains will be re-introduced sometime soon although I think that rumor’s been around for a few years now. I’m glad we had the chance to enjoy this unique experience – is it one you would do?

*Posts about where we’ve been since leaving French Polynesia and before we arrived in Battambang, Cambodia will slowly be posted. We’re trying to get closer to “real-time” with this!*