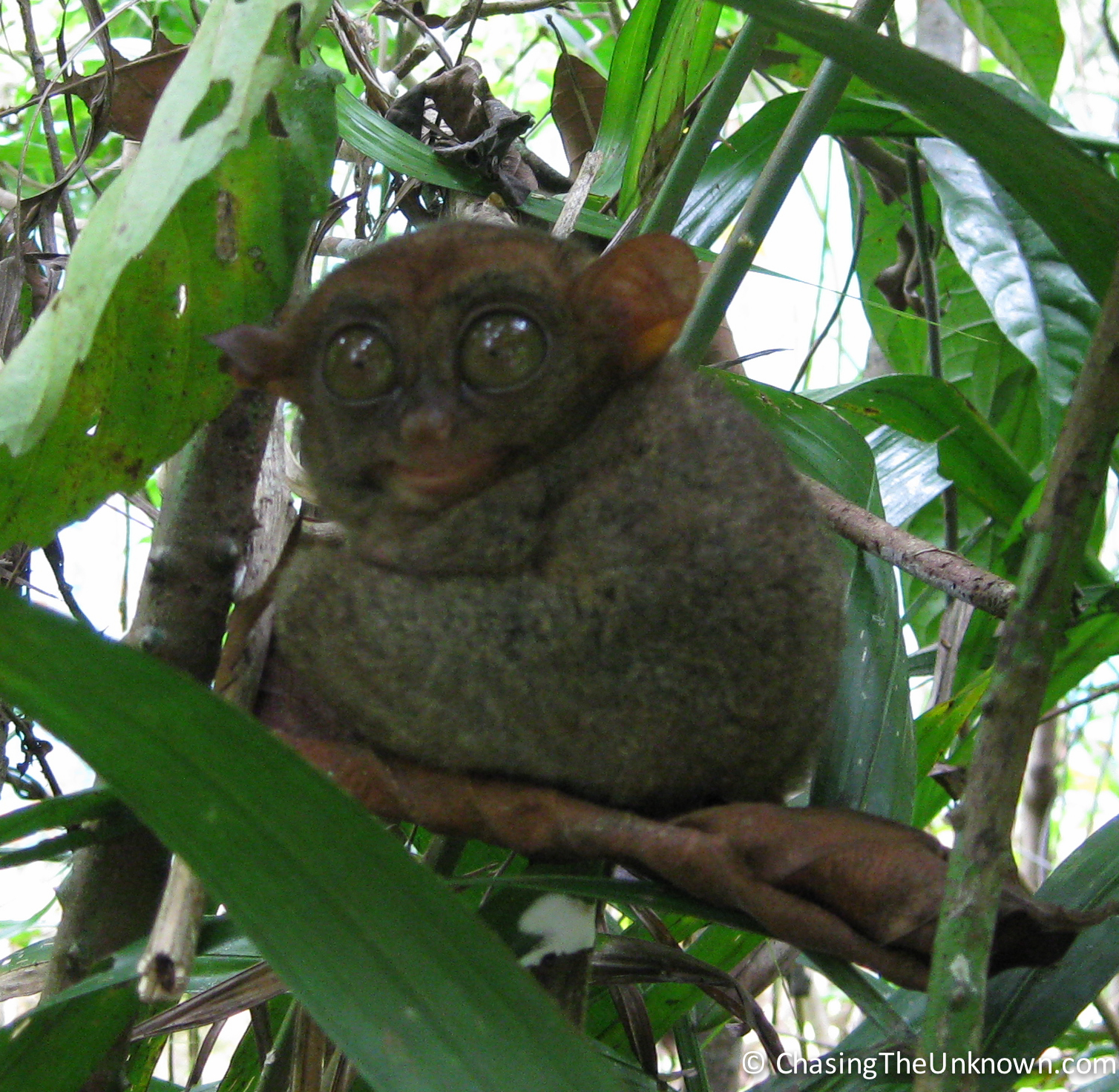 Primates that can fit in the palm of my hand; brownish-green hills that resemble overgrown anthills; caves that beg to have their stories of WWII told; a green river nestled between jungle-covered hills; access to a white beach lined with bars and restaurants owned by those trying to create a mini-Boracay; and some excellent diving 45-minutes away by boat. This is Bohol. Like so many other islands in the Philippine archipelago, I’d like to return and see parts not-so-firmly planted on the tourist trail. And maybe more time on some that are! 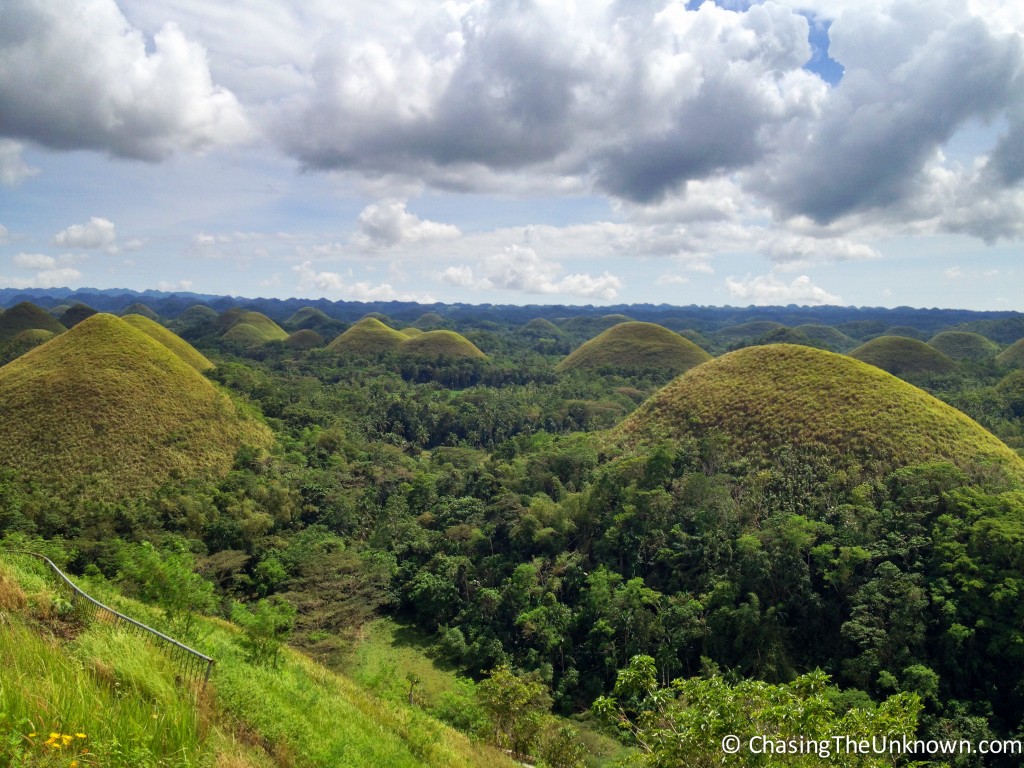 I spent four nights on Panglao, nestled off the southeast “corner” of Bohol, diving at Balicasag Island and generally taking it easy. Then another four nights on the banks of the Loboc River in a backpacker haven called Nuts Huts. The latter is an excellent base for exploring the Chocolate Hills, visiting the Tarsier Sanctuary, hiking, kayaking, and meeting other travellers. Which is exactly what I did. 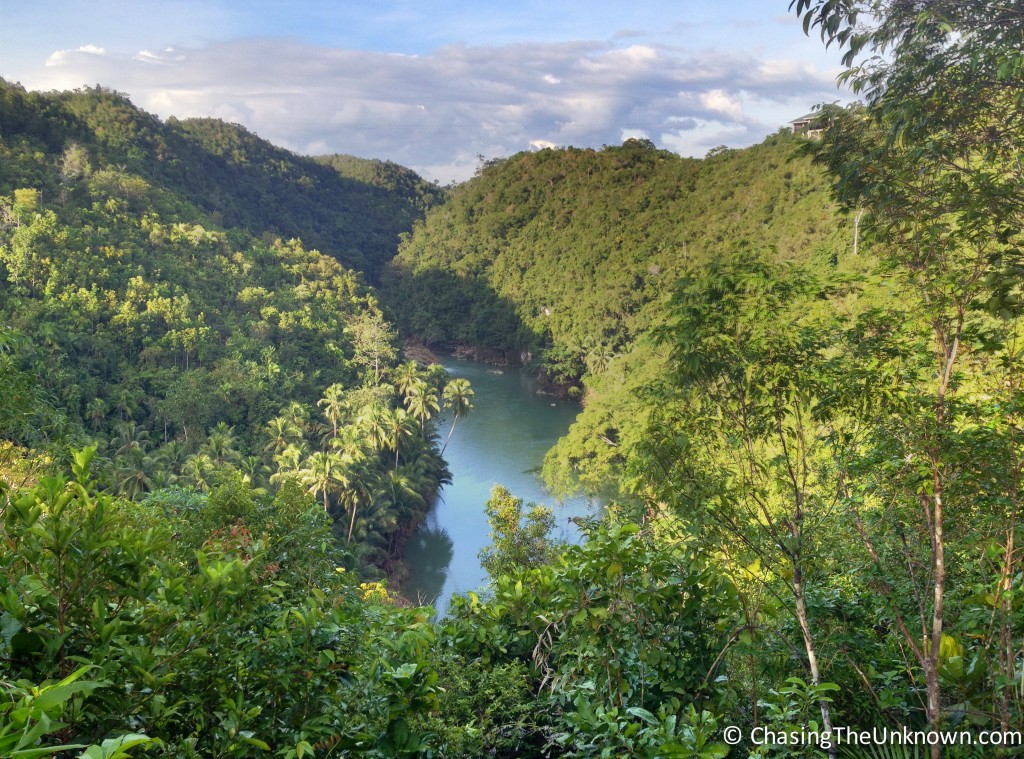 In dry season, the Chocolate Hills are apparently chocolate-colored and look like drops of chocolate. Ten years ago, dry season would likely have been now, in January. But typhoons come ever later in the year, pushing dry season in this part of the country to an unknown start date, maybe in March? At any rate, these mounds of what I believe are eroded coral and limestone are unlike anything else I’ve seen, even covered in green vegetation. There are more than 1200 of these hills and a viewing platform has been built to accommodate the countless visitors – Filipino and foreign – who are willing to climb the stairs. 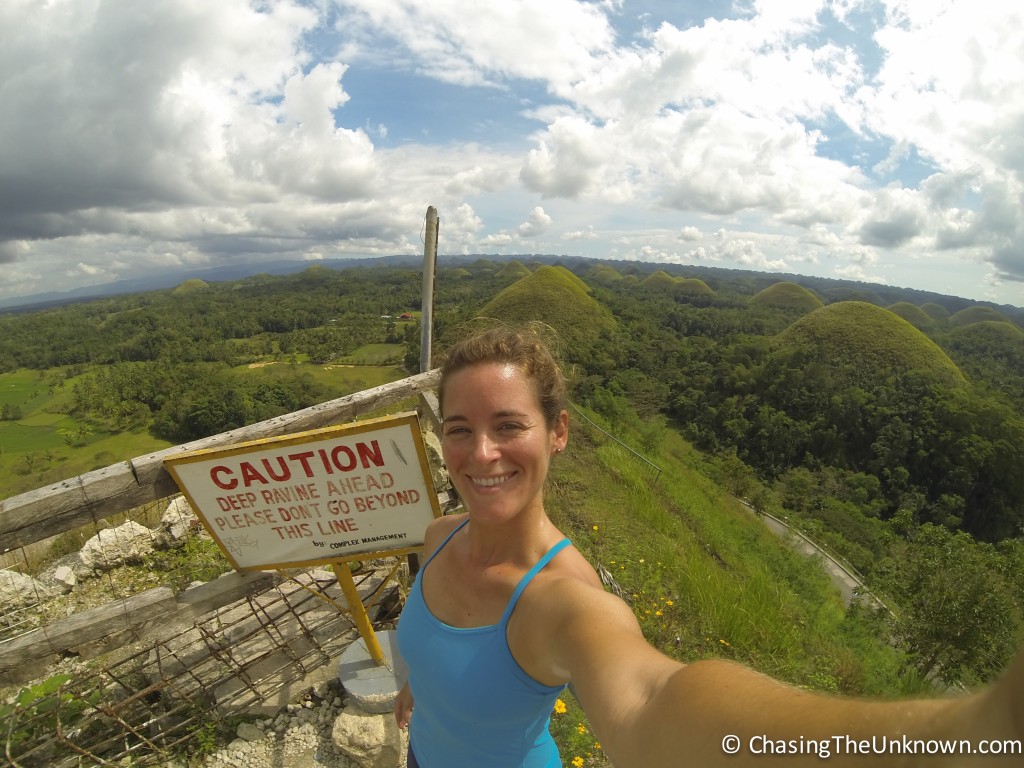 Bohol’s other claim to fame is the ridiculously adorable tarsier. These little primates are loners who don’t like sharing their space, nor are they particularly fond of humans. Many held captive have been known to commit suicide by bashing their heads against something hard. The most responsible place to see these tiny animals is the Tarsier Sanctuary, where the animals have the space they want and the freedom to leave. As I learned when I arrived, they tend to do just that during mating season. Only two young ones were around for me to ogle. The rest were off impregnating each other in the wild. 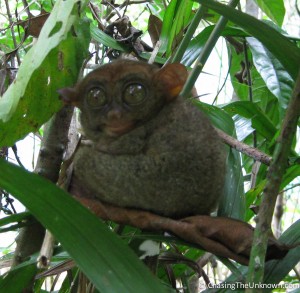 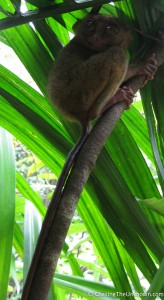 As much as I’d have loved to hold one of these in my hands or even just to pet one, doing so would upset the tarsiers and could result in tiny teeth marks all over me. I’m happy to have gotten as close as I did to these two and that both woke calmly when I approached. My guide (required to enter the sanctuary) was incredibly knowledgeable and patient with my questions about what they eat – insects, butterflies, lizards, small birds; how the guides find them each day – by walking around and looking, no tracking devices here; how long they live – average of 25 years in the wild or 12 in captivity; how much they weigh – average 117-134 grams (4-5 ounces) depending on gender; how far they can jump – 5 meters (16 feet); and can they really turn their heads 180 degrees in each direction – yes. 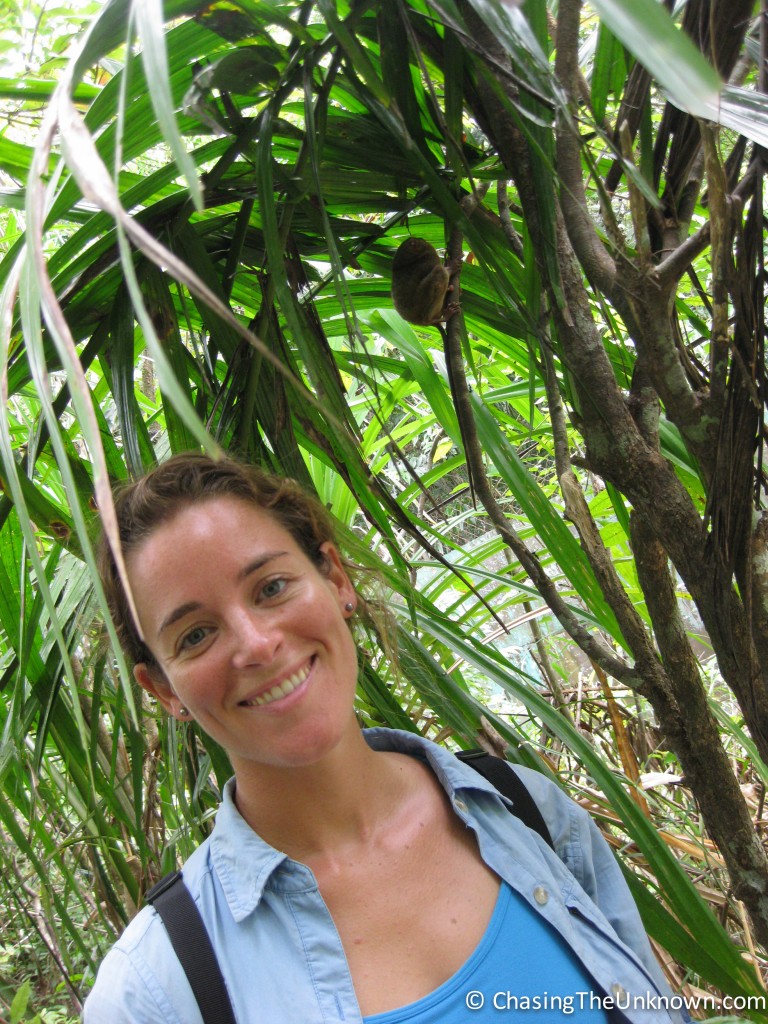 Opposite Nuts Huts, across the Loboc River, a local resident will guide tourists to a cave high atop a hill. The cave cuts from one side of the hill to the other and was used by Filipino soldiers hiding from the Japanese during WWII. It’s now filled with bats, large spiders, and some surprisingly intact stalagmites and stalactites. The hike up is a good one and a guide is necessary given the unmarked turn-offs and damage to the trail from a flood at the start of 2015. A headlamp or flashlight is crucial for getting through the cave as it’s pitch-black in places. 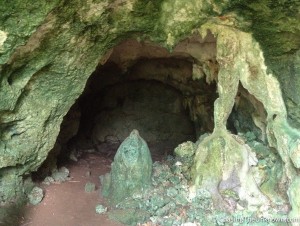 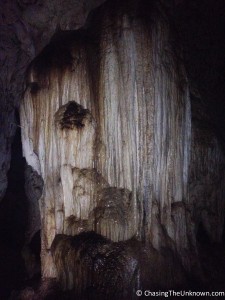 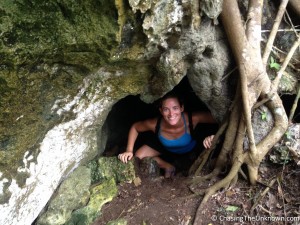 There’s far more to do in the area: ziplining, canyoning, quad-biking, and riding one of the horrid floating restaurants along the Loboc River being just a few. And there’s even more further afield which is why I’ve added yet another place to my ever-growing list of spots to which I want to return.

For anyone who’s been to Luang Prabang, Nuts Huts is a bit like Utopia if you subtract WiFi and substitute swimming and kayaking for volleyball and yoga. Like Utopia, there’s an open-air restaurant fitted out with comfy spots to lie down, excellent food, cold beer, and the added bonus of nipa huts to sleep in. And instead of a long path through town to find Utopia, there’s a set of stairs up from the river to the Nuts Huts restaurant and another set to the 800m path to the road. Like Dreamtime near Vientiane, getting there is part of its charm. 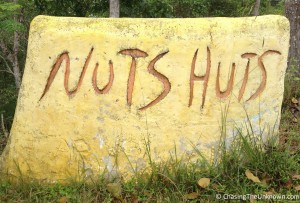 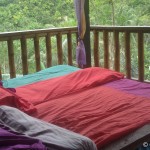 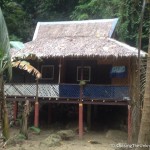 Reaching Bohol is easy: fly to Tagbilaran or take any number of regular ferries from Cebu City, Dumaguete. Boats may or may not be going to and from Siquijor, Camiguin or elsewhere so talk to the boat companies. Jeepneys cover the island although getting to Alona Beach on Panglao is easier in a tricycle as jeepneys don’t run that route as often as others. Hiring a motorcycle is the fastest way to get around but as I had time and no inclination to ride up and down hills on my own, I took buses, jeepneys, and tricycles everywhere. And as so often happens, I’m glad I did. Riding public transportation gave me a chance to talk to locals – both while waiting and when crammed into a vehicle moving way too fast for the road conditions and number of passengers. And after hopping off a jeepney and waiting for a bus, I wound up interviewed by someone profiling travelers for an airline magazine. I doubt I’ll wind up in the finished piece but it was a fun chat nonetheless.

2 thoughts on “Cute animals, weird mounds of earth, what’s not to love about Bohol?”