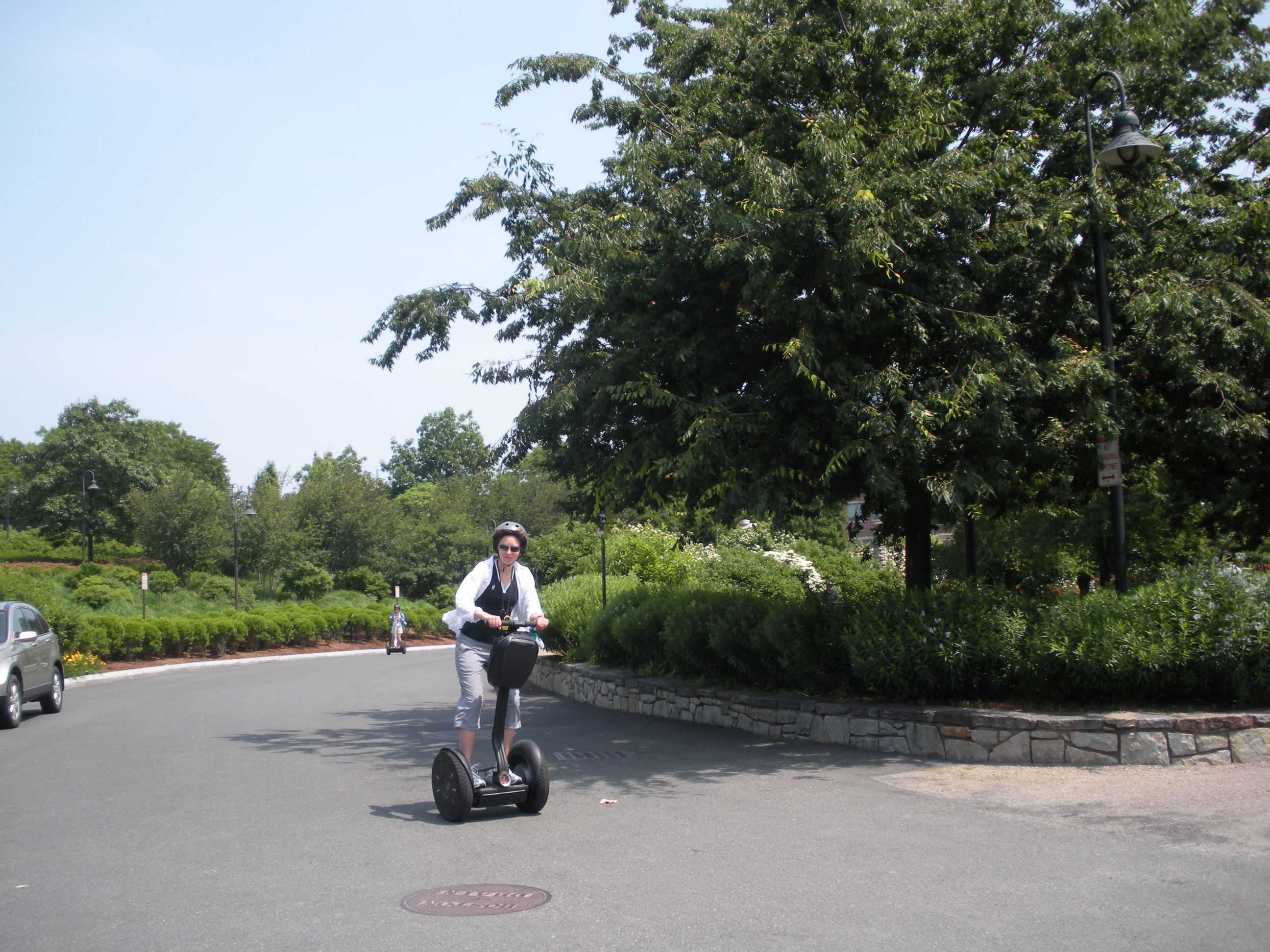 Jen and I have left New England for a while so before we left, we played tourist in our own backyard. This is the first of our posts on local sight-seeing. We couldn’t play tourist every weekend – we still had friends to see, laundry to do, a yard that refused to take care of itself, and a travel account to fund. And some things we did just weren’t worth writing about. So there won’t be too many of these “local” pieces but while we’re getting settled on the island of Utila we thought we’d roll these out.

Since this whole site is new, we’d love your feedback. What works? What doesn’t? What would you like to know more about? Do we go on too long? Want more pictures? More links? More cowbell?

“If Will Arnett could ride one of these all over the sets of Arrested Development, surely I can get down this hill without crashing.” At least twice that thought went through my head while cruising around Boston on a Segway. By some miracle, I was right; I successfully navigated the bike lanes and paths without once hitting anyone or anything. For two hours, Jen and I joined a Boston By Segway tour led by “Captain Ian.” Ian’s a man of average height, as my father would say, and his calves rivaled my dad’s during his peak running years. Meaning they resembled fire hydrants. With his baby blues and big smile, I suspect that Captain Ian does fairly well as a tour guide. Although he wasn’t going to get lucky with anyone in our group, he did a great job of showing us a good time on two wheels.

The tour started in the North End where we sat through a safety video, selected helmets, and were given a brief tutorial on operating a Segway. The guy training us was either suffering from OCD or on a serious power trip. If you weren’t standing in exactly the right spot waiting your turn to be trained, you would not be trained. Forget taking a picture of your spouse or hitting the restroom before you go. In this guy’s world, if you don’t do exactly what he says, you are both an idiot and an unsafe rider. After watching this guy talk to staff members and customers, we figured placating him was our safest option. “You’re a natural at this,” he said to Jen while training her. “I’m just listening to what you told me!” I swear Jen batted her eyes when she laid that one on him. After we’d proven our ability to start, stop, turn right, and left (those with Zoolander issues will not be permitted to start the tour until they successfully turn left), we were allowed to tool around a tiny parking lot with the other riders waiting for their groups to finish training.

From the North End, Ian led us through bike lanes toward the Zakim Bridge and into Paul Revere Park in Charlestown. He shared tidbits of Boston history as we rode, speaking through a walkie-talkie keyed to the same frequency as those we each wore around our necks. In Paul Revere Park, he gave us a few minutes to work on turning or otherwise getting comfortable with the Segways. Jen zipped off around the looping path, pushing her Segway as fast as it would go. I suspect she was the kind of kid who started popping wheelies on her bike the instant the training wheels came off.

Following a glimpse of the U.S.S. Constitution and posing for a cheesy photo, we were off to Bunker Hill Monument Park. According to Ian, the Bunker Hill Monument (which is actually on Breed’s Hill) was built before the Washington Monument and one of these days, maybe we’ll go back and climb its 294 steps.

From there it was off to the North Bank Bridge, a relatively unknown bike and pedestrian bridge connecting Charlestown and Cambridge that runs beneath the Zakim. The parks on either side of the bridge were filled with families, couples, walkers, joggers, and cyclists soaking up the sun. I had no idea this bridge existed which doesn’t surprise me given that I often seem to live under a rock when it comes to my knowledge of local construction projects.

Our route took us in to East Cambridge then back to Boston over the Longfellow Bridge, around to the State House, into the financial district, the seaport, and eventually back to the North End.

Captain Ian’s knowledge of local history and fun-facts was pretty good although he omitted a few things that surprised me. If you’re going to point out buildings filmed in The Departed, how can you not point out the very courthouse where Whitey Bulger, on whom Jack Nicholson’s character was based in that movie, was on trial at the time we rode by? And if you’re making a point to list all the “firsts” that Boston has, how do you skip the chance to mention our constitution, the oldest still-functioning constitution in the world on which the U.S. Constitution is based? Or the Omni Parker House, home of the first Boston Cream Pie?

Despite the holes, Ian’s tour was a good one. He kept us moving at a good pace, allowed us a few chances to let loose with the Segways and have fun while surrounded by great scenery, and he wasn’t overly cheery or cheesy. Once you get the hang of it – which takes fewer than 5 minutes – Segways are fun. We covered about 8 miles in just under two hours, including the time we took a break to rest our feet. Tours aren’t cheap and we wouldn’t have done this without the deal Jen got us but if we can find a similar deal on a Segway tour elsewhere in the world, we’ll jump on it.

Boston by Segway can be found online at http://www.bostonbysegway.com/ and off-line at 420 Commercial Street in Boston. The 2-hour tour is $90 per person but we got a 60% off deal with Groupon and were able to book it online without problem. The 2-hour tour heads out twice a day, rain or shine, at 10:15 in the morning and 3:45 in the afternoon. We did a morning tour and stopped for lunch afterward but would have been just as happy with an afternoon tour. If you take a Segway tour, wear comfortable shoes that provide good support and be prepared to walk away with “Seg-Legs.”

Note: the Groupon link is a referral link; if you choose to use it and purchase something, we get a small credit.