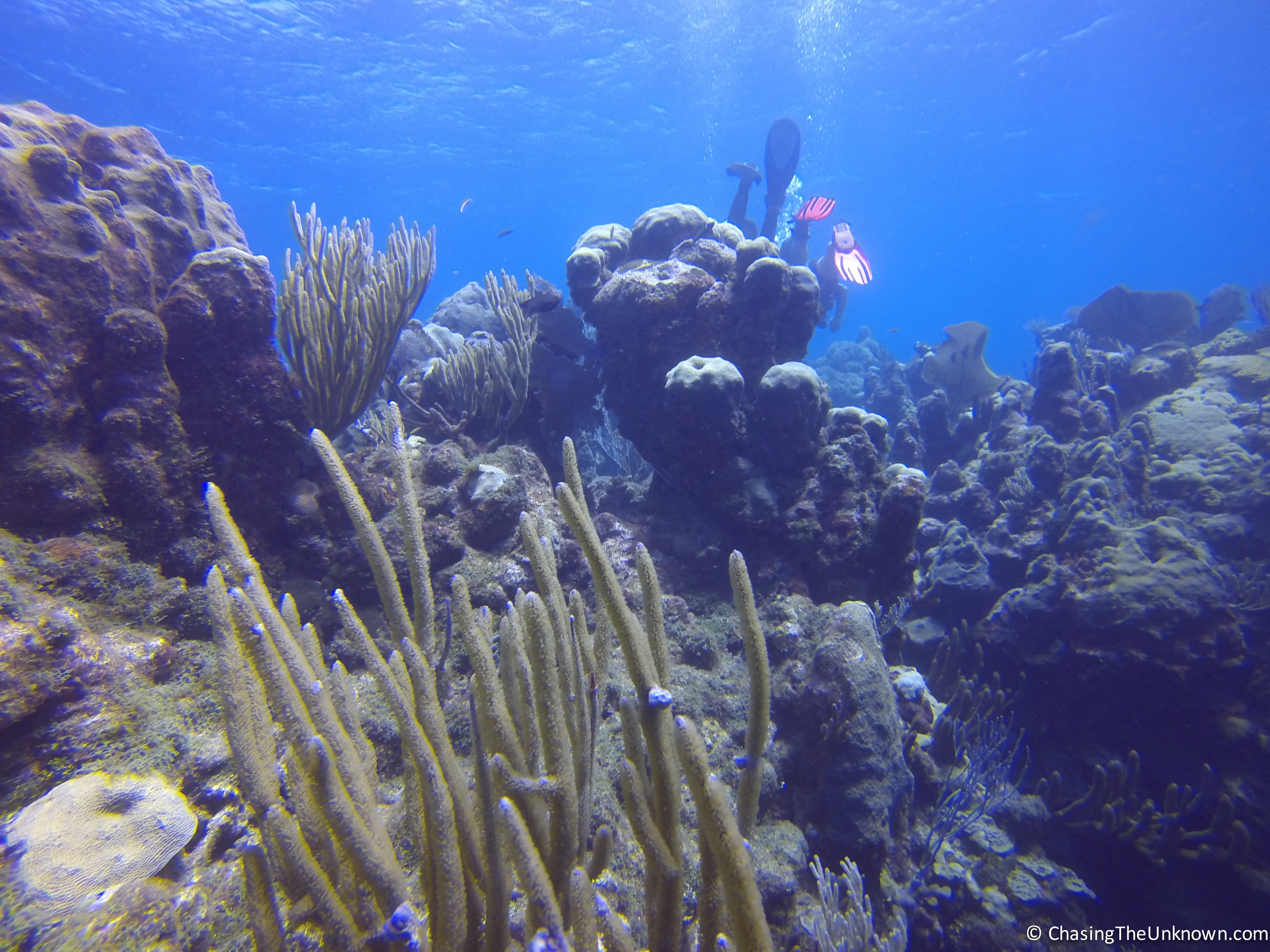 “You’ll have one dive then you can enjoy the resort. It’s very nice. I go there with my family sometimes. There’s a pool where you can relax and if you want to do another dive, you can decide then. It’s a nice boat with newer gear than the other place. And the instructor speaks very good English. You will like it. The taxi will you pick up here tomorrow morning morning at 10. If more people are going, you will share with them.” Hungry and tired, a million thoughts raced through my brain: that’s an awfully late start time; he says it’s newer and nicer than the dive center at Playa Ancon but why haven’t I read anything about it? Am I comfortable diving with a shop that I know nothing about? I haven’t met the staff or seen the gear or even had a phone call or email exchange that would give me a sense of whether these are people I want to trust in the water with my father who hasn’t been diving in nine years. Is this going to turn out like that day of diving in Vietnam? Does this guy have any clue what he’s talking about? Oh screw it, let’s do it. Adventures in Cuba! Later in the day I found the resort in a guidebook which said the dive boat goes out daily at 9am and 1:30pm. And that it’s a lovely hotel with a hill-top pool and restaurant with killer views. Schedules change so I didn’t worry too much about the fact that we were being picked up at 10. Because the resort is closer to Cienfuegos than Trinidad, I hadn’t noticed it in the book: we didn’t go to Cienfuegos and I had focused my research on diving around Trinidad, the only place we could fit in a dive or two during our short time in Cuba.

The next morning, an instructor who never gave us his name sauntered in around 10:15 and we piled into a car loaded with tanks and gear, picked up two people a few blocks away, and headed off along the coast. After about twenty minutes, the driver turned down a dirt road and stopped. He hopped out, opened a gate, and continued driving. There were chickens and dogs and a house. A woman walked by with two large rats on her shoulders. Live rats. The largest I’ve ever seen. “We’re here.” My father and I looked at each other – this was not what we expected. But there we were. Walking toward a cliff, carrying dive gear and shaking our heads. “So, you are certified divers, yes?” We both said yes and gave our certification levels. “Ok, good. You will dive with my friend. He is from here. I will dive with these other two as they have never been diving before. My son is also coming. He’s a divemaster too.” We looked around, wondering who the friend would be. The woman with the rats? The old guy in the rocking chair? While this story would be better if it had been either one, it turned out to be a nice guy who spoke no English but was willing to speak Spanish slowly and simply for me. While underwater there is no language barrier, I wanted at least some idea of what to expect on the dive. Maximum depth, where we were going, that sort of thing.

“Ah, I forgot the weights! I call my son but he’s not answering. Probably on his bike coming here already. Wait, wait, I find something.” At this point, I was starting to laugh. The tanks were steel and I wouldn’t be wearing a wetsuit so I knew I could dive without additional weight. My father, however, would need some. Our friendly instructor returned, his hands full of gravel. “This one is yours, yes?” He nodded at the gear I’d set up. “It’s ok, I shouldn’t need any weight.” “No, no, it’s better you have some. Just in case.” He zipped open the pockets of the BCD and dumped a handful of gravel in each one. Then he ran off to get more. Once satisfied that I had enough, he found some larger rocks and slid those into the pockets of my father’s BCD. Throughout, my father stood to the side watching and shaking his head with a smile. Once we assured each other that we were ok with the situation, we nodded to the instructor that yes, we were ready. Within seconds, someone threw our tanks and gear over the cliff to the bay below. Our divemaster was already in the water, waiting for us. Fins in hand, we started down the narrow steps and ducked into the water. Gear donned, we swam for at least ten minutes across the bay before I turned on our divemaster’s air and we started to descend. 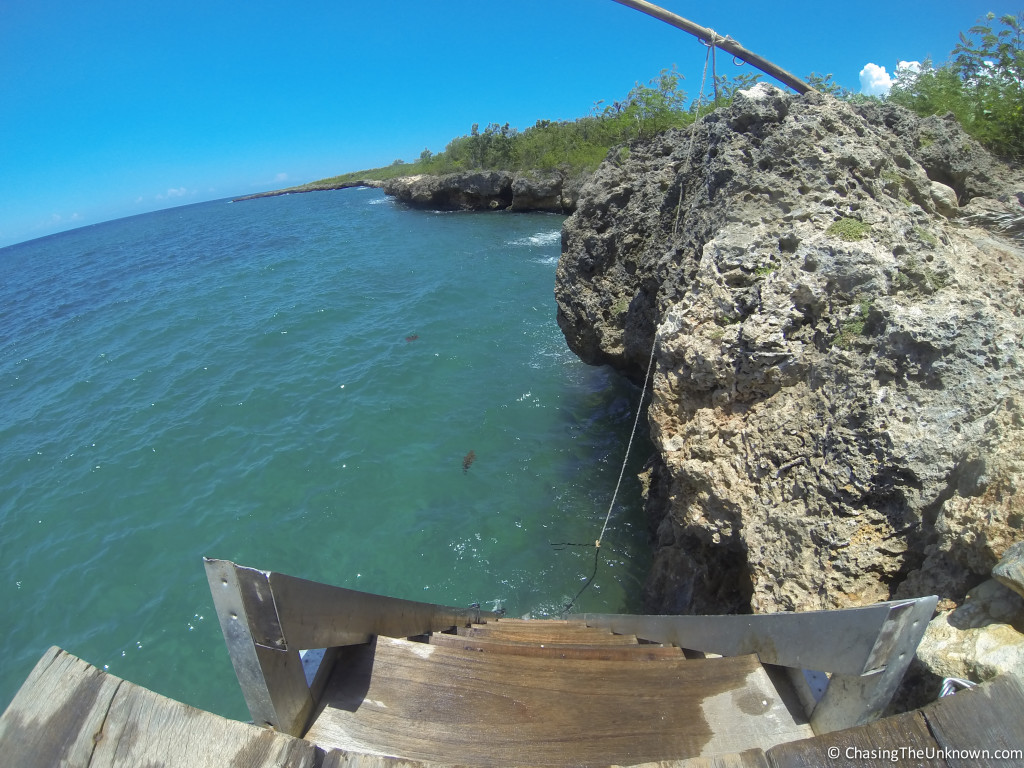 Sadly, those rocks in my father’s pockets wouldn’t stay put. And there weren’t enough of them. After the three of us tried every variation of placement we could think of, we gave up. Our divemaster latched on to my father’s tank and held him down the entire dive. I tagged along behind, looking for places to dump the gravel in my pockets and thinking about how ridiculous the situation was. The dive itself was nice although nothing too exciting. Healthy hard and soft corals, the usual small reef fish, a couple of invasive lionfish, plus a few crabs. Aside from my father being under-weighted, it was a lovely, easy dive.

We all surfaced without problem and, the dive over, loaded the unwashed gear back into the taxi. “So, I need your help. There is a checkpoint on the road back. If they open the trunk, say it’s all yours. You’ve been diving and it’s all yours. If not, the driver will get in trouble. Ok?” Four of us were heading back to Trinidad while the instructor, his son, and the divemaster hung around. We all agreed to claim the gear belonged to us if the need arose and I was relieved we had a native Spanish speaker in the group who was also fluent in English (and probably two or three other languages). Visions of us standing on the side of the road, SCUBA gear strewn everywhere while we pointed out what belonged to whom, danced through my head. As it happened, the taxi was stopped and the driver’s paperwork checked. Not a word was said to us and no one asked to open the trunk.

The following day, we hopped on a bus to Playa Ancon, the beach I’d expected us to dive from. And there, right in front of us, was a lovely looking dive boat. We watched as divers traversed the beach between the shop and the boat, heard the multilingual staff answer questions and help divers get geared up. And we looked at each other and shook our heads. Diving in Cuba could have been like diving in any well-developed nation. But for us, it was a crazy adventure that gave us more insight into Cuba’s economy of entrepreneurs and a glimpse of two massive rodents sitting calmly on a woman’s shoulders. 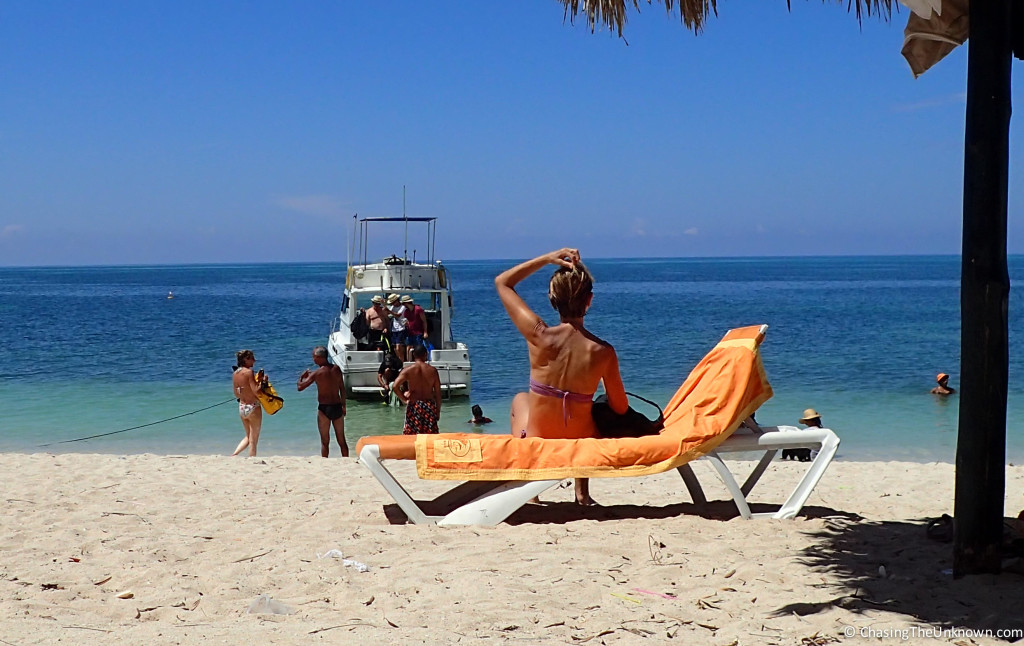 When we spoke with the guy who arranged the dive for us, he claimed to be surprised that we didn’t go to Villa Guajimico as he’d told us we would. We were adamant that it was all ok and we had no complaints, we simply didn’t experience what we expected. But I suspect he knew all along what he was setting up for us and that he stood to benefit from it. Regardless, it was one memorable dive!

4 thoughts on “Diving in Cuba”