If you’ve so much as looked at the home page of this blog, you know that diving is a huge part of my travels. In the last two years there have been only two countries I’ve visited where diving was an option that I didn’t take advantage of and part of me still smarts at that. Especially Japan – next time I get there, I should really make it to Okinawa. But that’s a subject for another day. Today, I’m thinking about freshwater diving and cichlids.

Lake Malawi is only the second place I’ve done purely freshwater diving – Chatfield Reservoir in Colorado having been the first when I completed my Open Water certification back in the 1990s. The visibility there was so terrible that on one dive, I couldn’t see which direction my bubbles were going. Barracuda Lake in the Philippines is part saltwater and part fresh which is bizarre but good fun. And there, the visibility was great, especially in the freshwater layer. Aside from different organisms and particulates, there aren’t too many differences between salt and freshwater diving yet the differences make the latter far more relaxing. Saltwater makes a person more buoyant so there’s more need for additional weight while in freshwater, little to no weight is necessary for someone of my size and experience. If there’s no wind then there’s a good chance that a freshwater lake will be calm at the surface and currents, if any, don’t usually have the same strength as those encountered in the open ocean. I dove in two locations along Lake Malawi: Cape Maclear and Nkhata Bay. 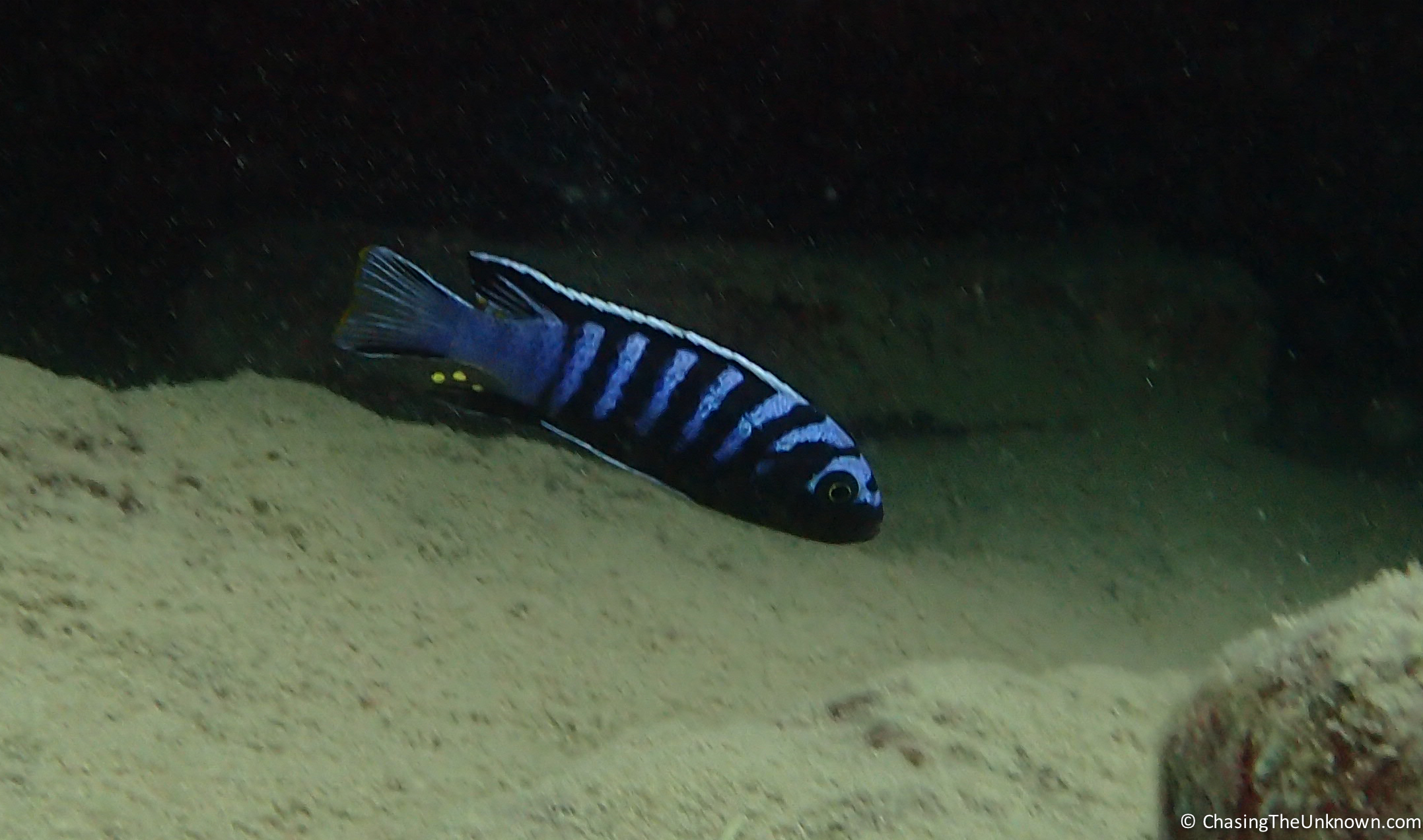 There is no colorful coral in a freshwater lake but the bright blue and yellow fish were more than enough to keep me happy. There are hundreds (some reports say around 1,000) species of cichlid in Lake Malawi but it felt as though I saw the same five or six species everywhere. Some spend their time upside down, living inverted beneath slabs of rock.

While they were entertaining to try to photograph, it’s the mouth-brooding ones that captured my heart. When a mother senses danger around her rock, she chases off as many fish as she can, then opens her mouth to draw in her babies.

Catfish are also plentiful in the lake and a night dive in Nkhata Bay means watching dolphinfish hunt. I don’t take photos on night dives so here’s a link to what these guys look like. It may seem odd coming from a vegetarian but I love watching the food chain in action so descending into a school of hungry predators chasing tiny prey was damn good fun. The local divemaster I dove with carried one hell of a knife and at night, I was glad he had it. Not because of the dolphinfish who were happy to have our lights illuminating their targets but because of the number of fish caught on lines left behind by fishermen, some of them able to survive with our help. Nowhere that I’ve been diving have I seen as many tangled fishing lines caught on rocks, abandoned by their owners. Given that I’m rarely in lakes this isn’t a surprise but it was part of what made diving in Malawi unique. Also unique: surfacing from a dive and propelling myself into the boat only to come face to face with dead fish purchased from a fisherman during my dive.

Most dive sites are within 15 minutes of shore, currents are gentle, the water was a comfortable 26C by the time I left, visibility is good, and even on a windy day when the lake was stirred up it was an easy entry into the water and then into the boat at the end of the dive. Diving in Malawi is not, however, cheap. I’m traveling with my own gear and got a discount for using it but standard price is $50 per dive including full gear, slightly more for a night dive. Given the short distance to dive sites (and thus minimal fuel used) and the cost of living dictating relatively low wages, I was surprised by the cost. I’m sure it isn’t easy to get gear serviced and compressors maintained in these somewhat remote locations but I’ve done plenty of diving in equally remote areas for far less money. It’s still worth a few dives and if you’re interested in trying it for the first time or getting your Open Water certification, it’s a great place to do so.

2 thoughts on “Diving in Malawi”