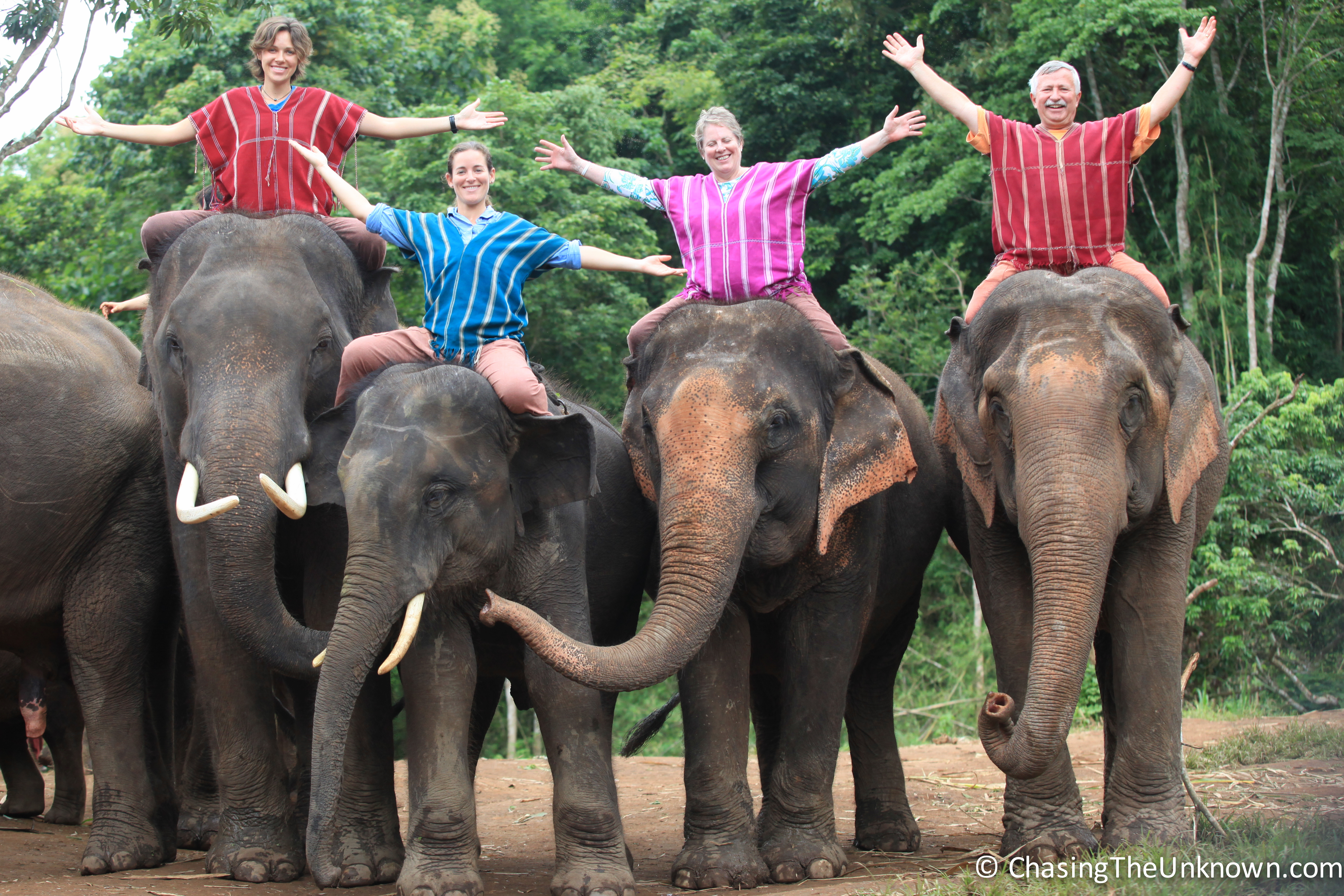 We rode elephants. We fed them; inspected the area between their toenails for sweat; assessed the dirt they’d collected overnight in different sleeping positions; counted the number of coconut-sized turds in their most recent dumps then inspected one for color, hydration, and smell; we washed them – the elephants, not the turds. But most importantly, we rode elephants. 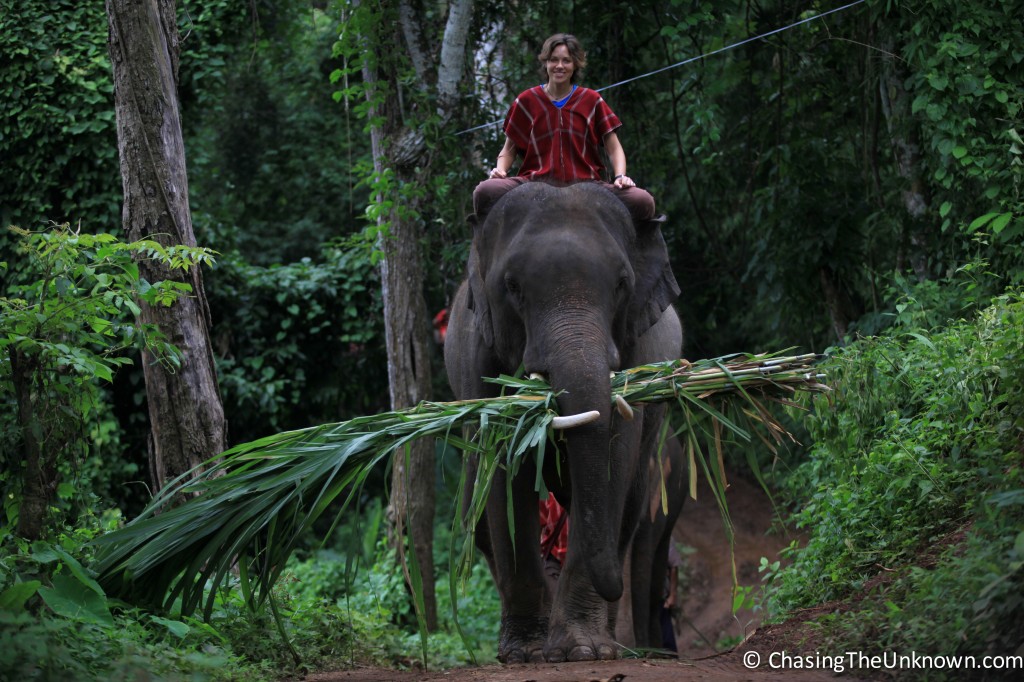 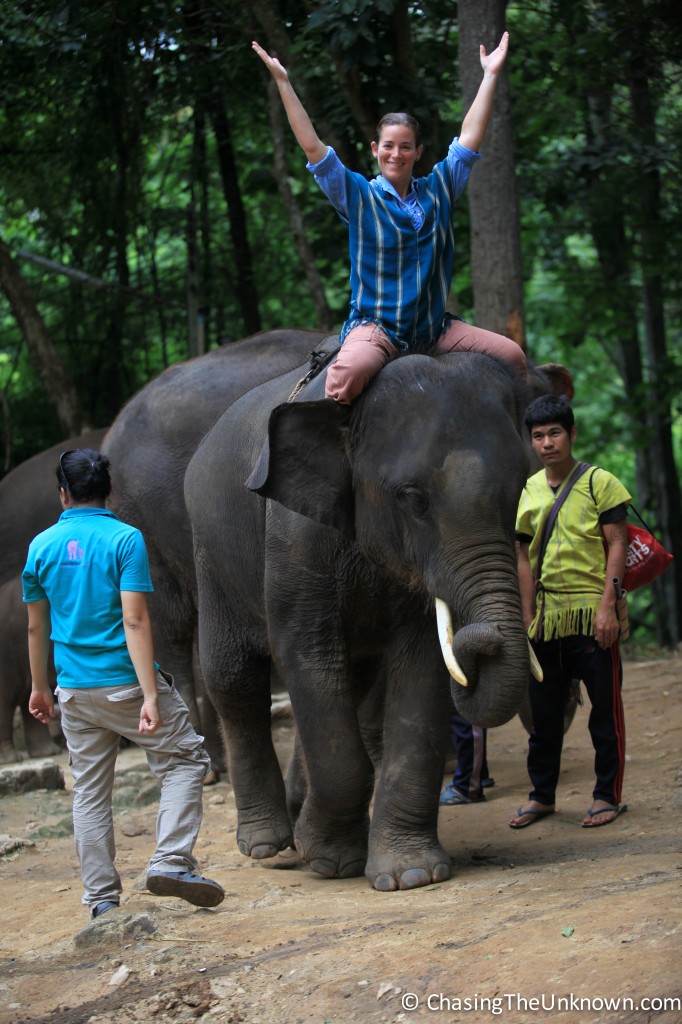 With my 65-year-old parents. 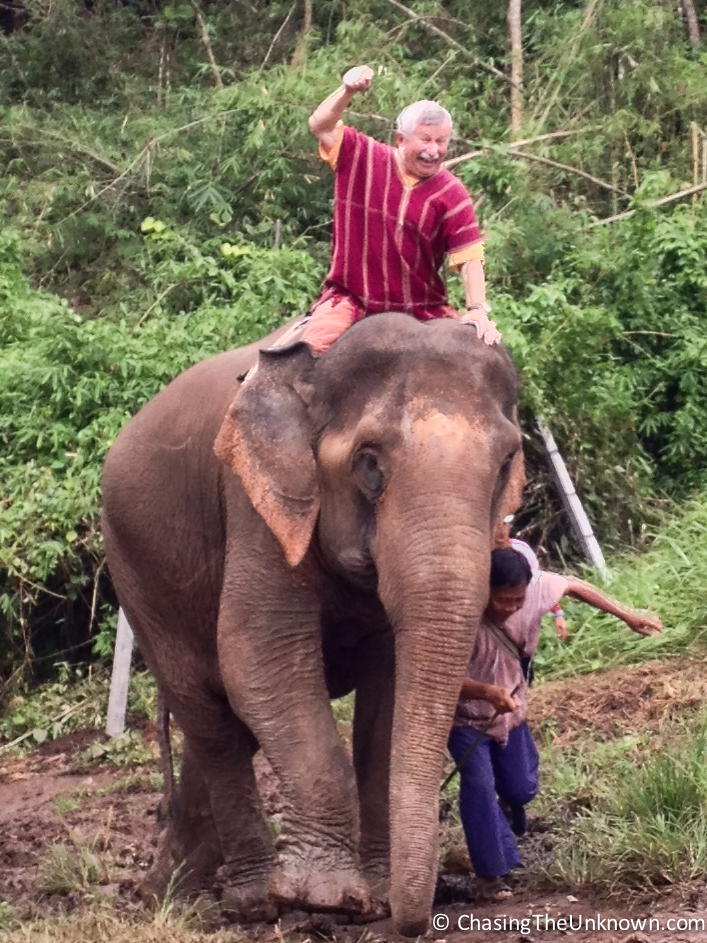 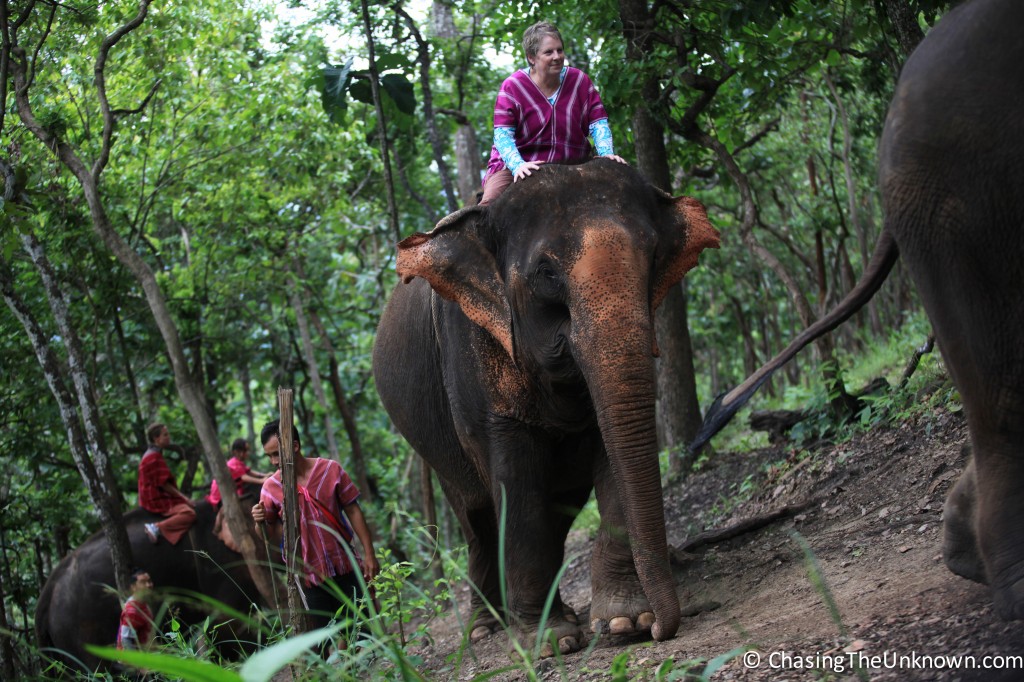 There are numerous places in Southeast Asia to ride elephants but it was important to us that if we did so, it be with an organization we trust takes excellent care of its elephants. When my parents decided to meet us in Thailand and travel with us for a few weeks, they both expressed an interest in having an elephant experience. We let them take the lead on making this happen but also reached out to a Cornell classmate of Jen’s, Dr. Josh Plotnik, who is now head of elephant research at the Golden Triangle Asian Elephant Foundation in Thailand. He gave his stamp of approval to a very small number of elephant experiences in Thailand including Patara Elephant Farm, located 30 minutes south of Chiang Mai.

54 elephants live at Patara although one or two babies may have been born by the time we get this post up. The elephants are rescued or adopted from circuses, illegal logging camps, and other miserable situations. Many require years of rehabilitation at Patara before being able to breed naturally, a critical practice for prolonging the species. 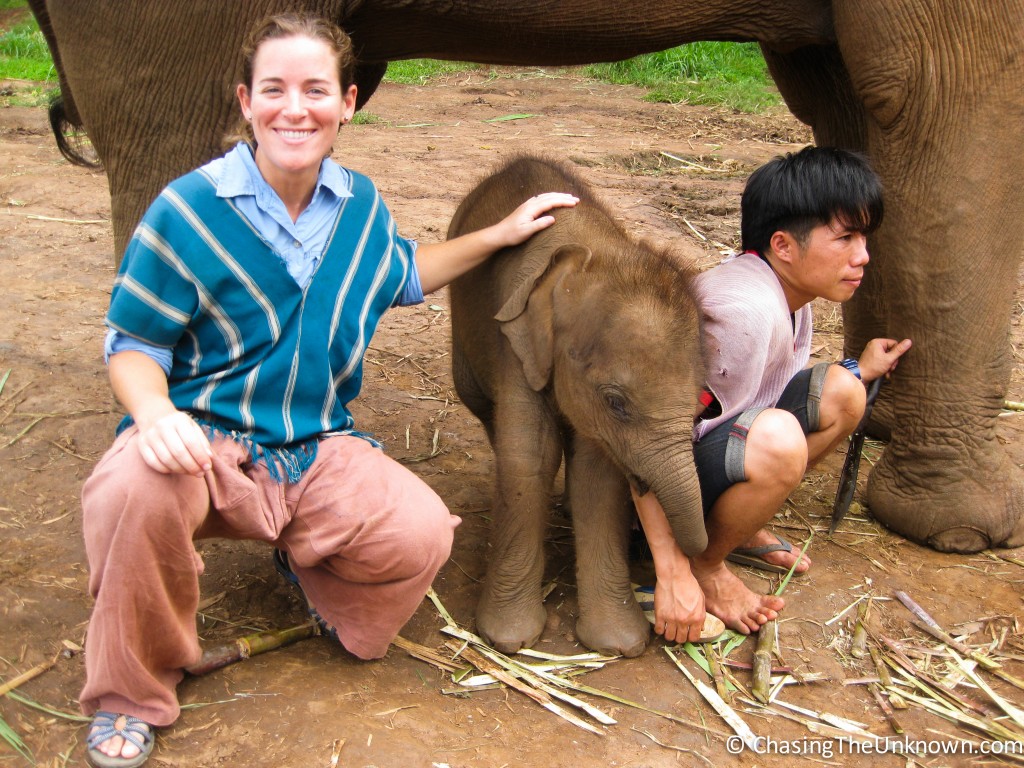 The “Elephant Owner for a Day” program starts with a chance to approach and feed some of the elephants. I learned quickly that an elephant trunk is STRONG and if you aren’t fast enough giving food to a hungry elephant, she’ll wrap that trunk around your arm to get it. But I also got to experience the first of many elephant kisses on my forearm and I knew then that I’d be spending the day smiling.

After a briefing, we were each assigned an elephant for the day by a staff member who had been sizing us up all morning. My mother was assigned a gentle and friendly 35-year-old female while my father spent the day with a 25-year-old female with an independent streak and no shame in ripping what looked like an entire tree from its roots at one point. Jen got the strongest elephant in our group of nine, a 20-year-old male named Dodo. And I was assigned to Poo, a 6-year-old male who likes to swim, speed down hills, and generally cause trouble the way a 6-year-old boy would.

We were educated on elephant behavior and health, taught Thai commands and words of encouragement, and given plenty of time to get acquainted with our elephants. We also had the chance to clean our elephants although in my case that mostly meant trying to stay on top of Poo long enough to brush him when all he wanted was to swim and frolic.

After donning our stylish elephant-riding attire and instruction on proper mounting, riding position, and dismounting, we had two chances to ride our elephants, the first time up and down hills in the jungle and the second on a flatter path with more open views of the countryside. Both were incredible experiences I hope never to forget. 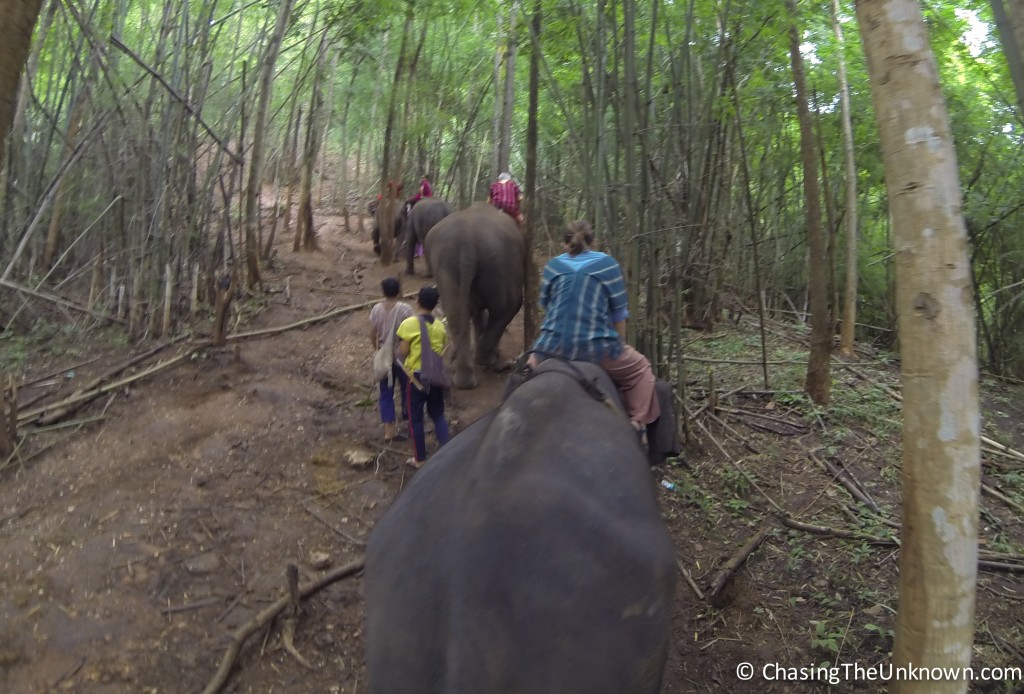 Want to know more about riding elephants and how uncomfortable it is? We’re happy to answer questions in the comments!

One thought on “An Elephant Ride to Remember”