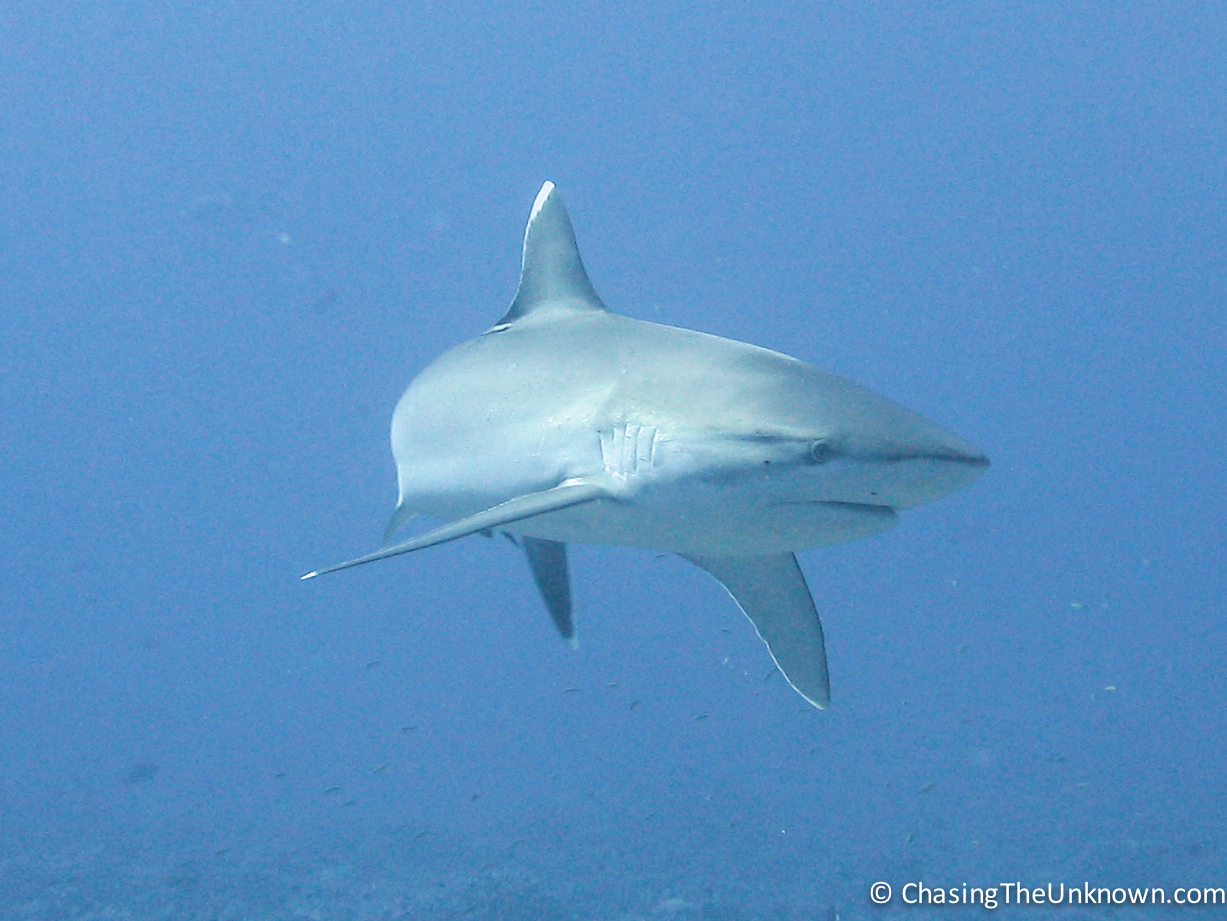 Hammerheads, silver tips, gray reef, black tip, white tip, nurse, and lemon: the sharks of French Polynesia I was lucky enough to see while diving. We missed the tiger sharks of Tahiti and Jen missed the hammerheads on Rangiroa but I think that means we’ll need to come back here.

Sharks aside, the underwater world in French Polynesia is incredible. Visibility is almost always unbelievably good, the water consistently 27 or 28 degrees C (80-82 Fahrenheit), and the odds are good that you’ll see schools of fish, rays, turtles, sharks, countless species of fish, and plenty of coral. Some of those you’re just as likely to see snorkeling as you are diving. 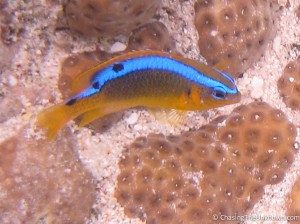 Due to an injury that kept me out of the water for a few days and our need to be fiscally responsible, we only managed one dive on Bora Bora but we found the snorkeling here better than anywhere else in French Polynesia so for the most part, I don’t mind. We did miss the manta ray cleaning station though and I’ve yet to see a manta anywhere – another reason to return.

Rangiroa’s Tiputa Pass is well known to divers who make it to this part of the world for good reason. Drift dives begin outside the lagoon so the current takes you into the pass. Along the way, you might hang on to the wall for a bit to watch dozens of sharks (apparently hundreds during summer months), eagle rays, schools of barracuda, humphead wrasse, and literally thousands of other fish. If you’re lucky, dolphins will come to play with you but even if they don’t come to play, you can often see and hear them playing at the surface. A canyon in the pass allows you to hide out and watch more life go by if you have enough air and no-deco time left to enjoy it. 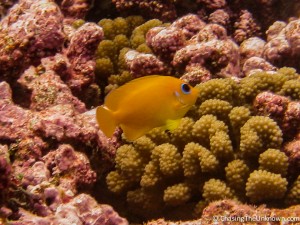 Avatoru Pass, about 12 km away from Tiputa Pass, is home to silver tip sharks. Our dive here was the first time that seeing sharks ever made my heart race: these guys come straight at you, mouths open, and don’t swerve around you until what feels like the last possible moment. 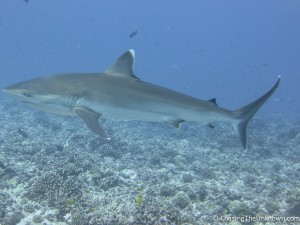 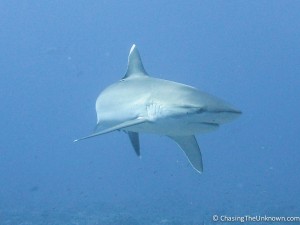 French Polynesia law requires at least Rescue certification to go below 29m/95 ft so Jen and I split up for one dive. While she saw a turtle and three spotted eagle rays gliding slowly by, I made a negative entry with a small group of divemasters and instructors in a spot with strong current. Within the first 90 seconds we were all pointing at a hammerhead chasing a grey reef shark. Adult grey reef sharks can be over 2.5m/8ft long and this one had a hammerhead about three times its size right on its tail. Rumor has it that hammerheads have been known to eat reef sharks so I was hoping for a show but didn’t get it. We saw two more hammerheads on that dive along with a huge napoleon (a/k/a humphead wrasse), plenty of black tip and grey reef sharks, and the usual colorful fish of the South Pacific. The ease of diving with excellent divers and letting the current push me along meant that I was more relaxed on this dive than I sometimes am and with so much to see, it goes down as one of my all-time favorite dives.

Diving in Moorea was similar to Bora Bora with the addition of schools of spotted eagle rays. The visibility was poor the day we saw them due to recent rain but they were just as beautiful as ever. 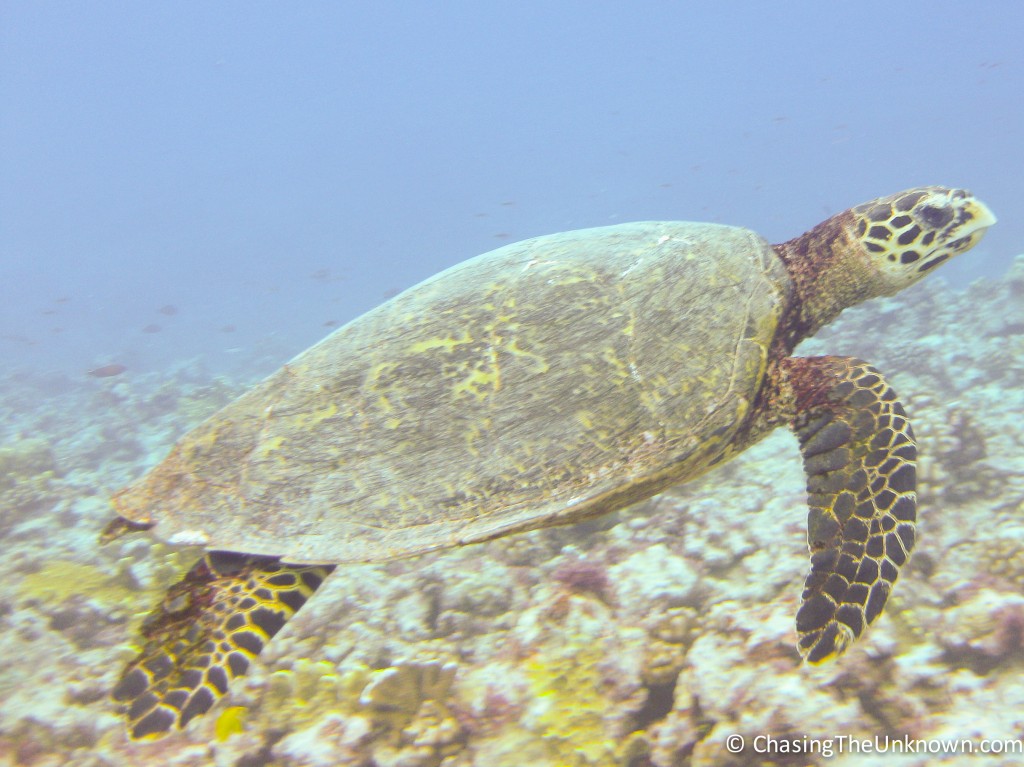 We didn’t make it to Fakarava which we’ve heard is better than Rangiroa so the reasons for a return trip continue to accumulate. If any of our dive buddies out there want to join me someday for a trip to the South Pacific to hit these spots and more, let me know when and I’ll start saving the airline miles and money to dive!

7 thoughts on “Underwater in French Polynesia: Diving and Snorkeling”