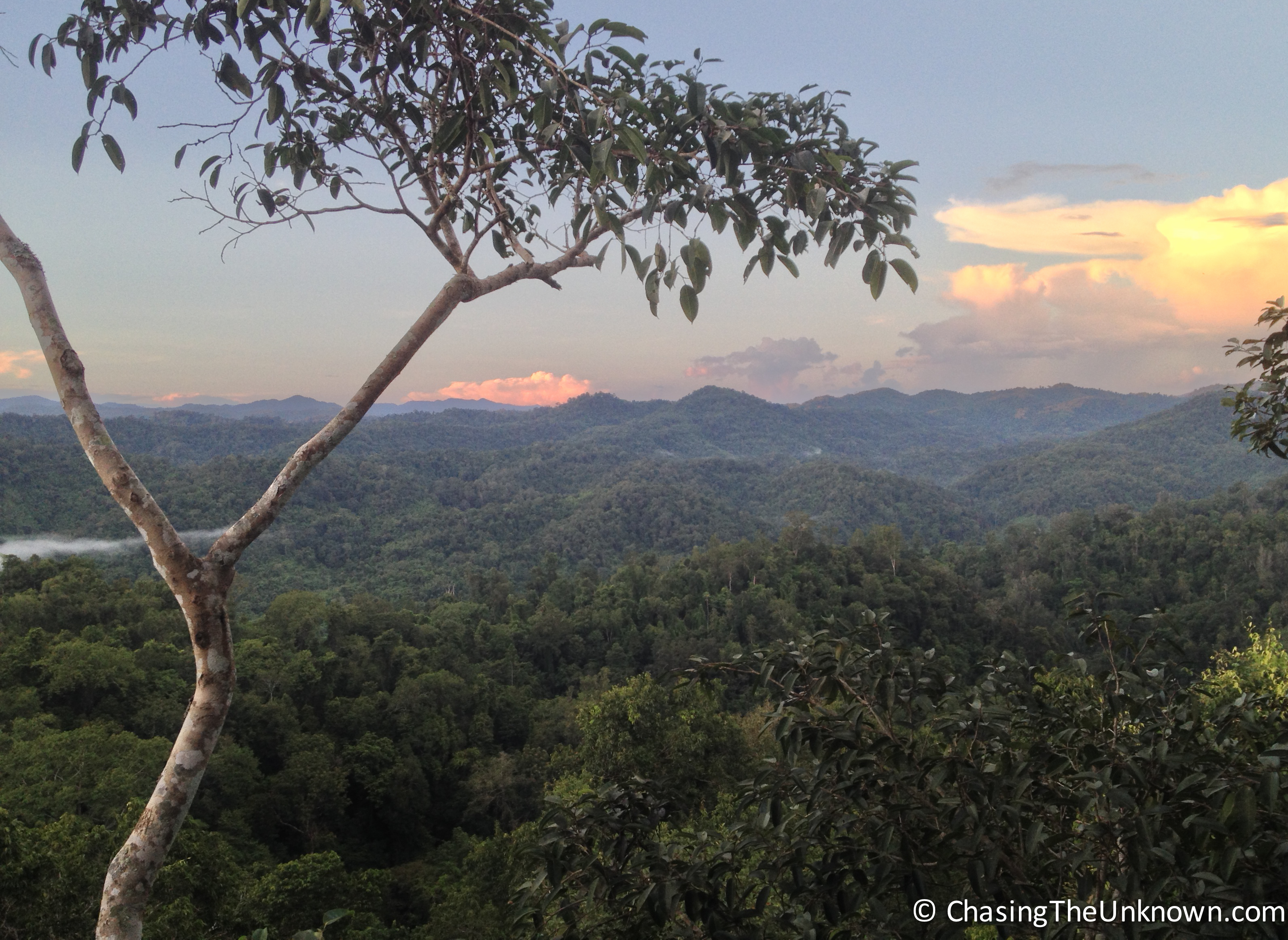 Superlatives are not my forte. In fact, I hate them. Tastiest meal I’ve ever eaten? Most beautiful place visited on this trip? Best dive I’ve ever done? Favorite food? Nicest hotel stayed in? I can’t answer any of those questions. But I can isolate a few experiences I’ve had, a handful of places I’ve gone, meals eaten, dives enjoyed, and days lived and identify them as truly outstanding. With each addition to that list, I feel even more fortunate to be alive in this moment, leading the life I am. The month I spent in Laos was life affirming and life changing so it’s already at the top of my heap but then it ended with one of my all time highs: the Gibbon Experience.

I first heard about the Gibbon Experience in Vietnam, talking with an Australian man who lives in Cambodia and went a few years ago during a trip to Laos. He talked of sleeping in a tree house, meals arriving by zipline, waking up to gibbon song. He said it was one of the best things he’s ever done. Recommendations like that I take seriously and they’ve led me to one reward after another (skydiving Fox Glacier; traveling to Rangiroa for diving; exploring temples in Mrauk-U; the list goes on). But the Gibbon Experience is expensive and with rainy season still going strong in northeastern Laos, I didn’t want to commit too soon. Eventually, having talked to countless others who recommended it, I booked myself on the Classic Experience: 3 days, 2 nights in the Nam Kan National Park.

Before booking, I was warned that if the road was bad – and it very well could be given the time of year – the trip would begin with a 5-7 hour walk, some of it very steep. The tree houses wouldn’t be as clean as they are in dry season, the mud could be very thick, leeches could be bad, and only those in good physical condition should sign up. There was no guarantee of seeing gibbons and the ziplines should be viewed as a means of getting from one place to another within the rainforest, not as the primary reason for going. Although the idea of a 5-hour walk in the pouring rain or searing heat wasn’t one that I relished, it would be worth it, I decided.

As it happened, the road was fine so we only had the standard 2-ish hour walk into the canopy. About an hour of that was steep and the group separated quickly based on condition and energy levels. At base camp, we were each issued a harness for ziplining and separated into two tree houses: four of us in tree house #3 (TH3) and seven in tree house #1 (TH1). The trek to TH3 saw us hopping on and off ziplines, changing elevation constantly along the hilly path, and wondering just how far into the jungle we were heading. Far, apparently. 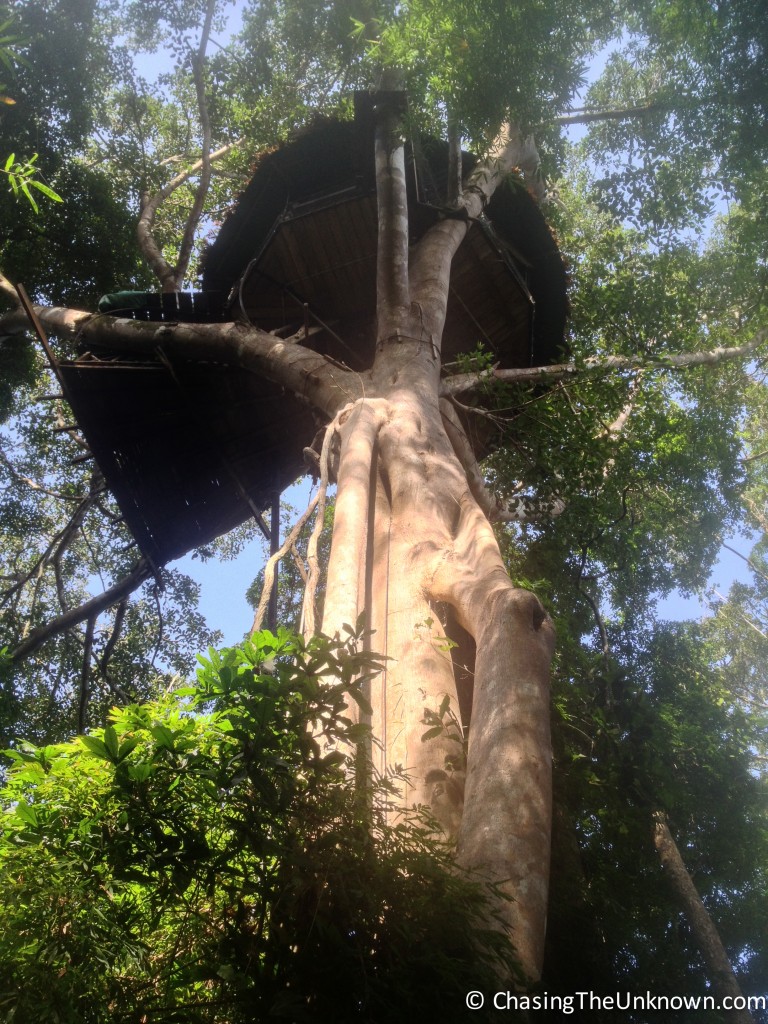 The open air tree houses can be entered only by zipline. Each is equipped with a squat toilet, cold water shower, two sinks (one near the toilet and the other in a “kitchen”), a single burner for boiling water, simple mattresses with basic bedding and mosquito nets, a few low stools with a similarly low table, and a large plastic box for keeping food away from resident critters. Some are more elaborate than others with multiple levels and one is even stocked with wine glasses. A few small lamps can be illuminated at night assuming the solar panel has done its charging job. Sleeping in a tree house, high above the forest floor, surrounded by the sounds of a jungle teeming with life is unlike anything I’ve ever done. And I’d do it again in a heartbeat. 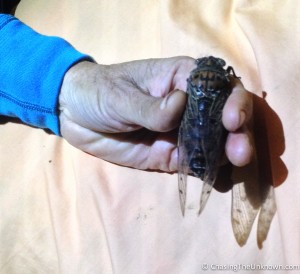 A cicada chorus accompanied all activity at nearly all hours. But the largest and loudest cicadas I’ve encountered started their nightly performance just after 6 and a morning show at 5:30. While this was a unique auditory experience I can only describe as a medley of saws rising and falling in pitch, it pales in comparison to hearing gibbons sing each morning. I don’t have the sound editing skills to remove all the background noise from this recording but hopefully it gives you some idea of what I heard just after dawn.

Having been warned that seeing gibbons doesn’t always happen and we should keep our expectations low, I tried to not get my hopes up. But when, in the morning of our second day, we ran into a group finishing their three-day stay who saw gibbons twice, it was hard to not feel a flutter of excitement. And sure enough, an hour later, we sat watching tree branches move waiting for a family of Western Black Crested Gibbons to show themselves.

For two hours, the four of us and our guide pointed, stared, smiled, and reveled in the beauty of what we saw. One baby, one older adult male who was mostly interested in eating, and four young adult males swinging about, trying to knock each other off branches (or catch each other when the game so required), the occasional appearance of the family matriarch. Two Black Giant Squirrels also entertained us with their long tails and yellowish faces. Words cannot describe the joy I felt watching these long-armed primates frolic in their native habitat.

Late for lunch in TH7 (each day provides a chance to hike and zipline to the other treehouses and look for wildlife there; we saw gibbons at TH1), our guide eventually told us it was time to move on. Within minutes of our departure from TH1, the sky opened up and rain poured down. Not one of us had raingear at hand but no matter how wet we got, how sharp the rain felt on our faces as we ziplined through it, or how treacherous the paths became, we were all absurdly happy. Clothes and shoes completely soaked through, we returned to TH3, our guide having run off to grab our lunch from the kitchen near TH7, beaming.

The Gibbon Experience employs local residents to build and maintain the tree houses, ziplines, trails, and supporting structures. Original guides were former poachers, enticed to make more money guiding tourists than hunting endangered animals. Today, many of the guides are family members and tribesmen of those original guides. The company plans to hand over ownership to the Lao people once the infrastructure is complete and the company continues to work diligently to preserve the nature reserve, showing the community how profitable it can be to preserve this resource instead of poaching, logging, and slash-and-burn farming. So although it’s not cheap, I felt good about where my money was going and felt I got far more out of it than I paid for. Trips leave from Houay Xai in Bokeo Province; easily reached from Thailand by crossing the border at Chiang Khong, from Luang Prabang by boat or bus, and from elsewhere in Laos by bus, jumbo tuk-tuk, or whatever means of overland transport one prefers. Booking by email is easy and the staff I met were all friendly, helpful, and a true pleasure to interact with. They weren’t kidding about being prepared for a few wet, muddy days. My sneakers and the two pairs of socks I had with me will never be the same.

If I can afford it and I find myself in the area at the right time of year (not rainy season when it’s too dangerous), I’d return and trek the longer distance to the waterfall. In addition to the ziplines, tree houses, and gibbons, there’s the chance to jump into a pool at the base of a waterfall. If you have any interest in seeing wild animals in their natural habitat and you don’t mind a few days of good exercise and basic accommodation, I’d highly recommend the Gibbon Experience. Like the Australian man I met in Vietnam, I count it as one of the greatest experiences of my life.

Post updated 21 October 2014 to include photo of gibbon spotted from TH1.

8 thoughts on “Gibbons in the Mist”