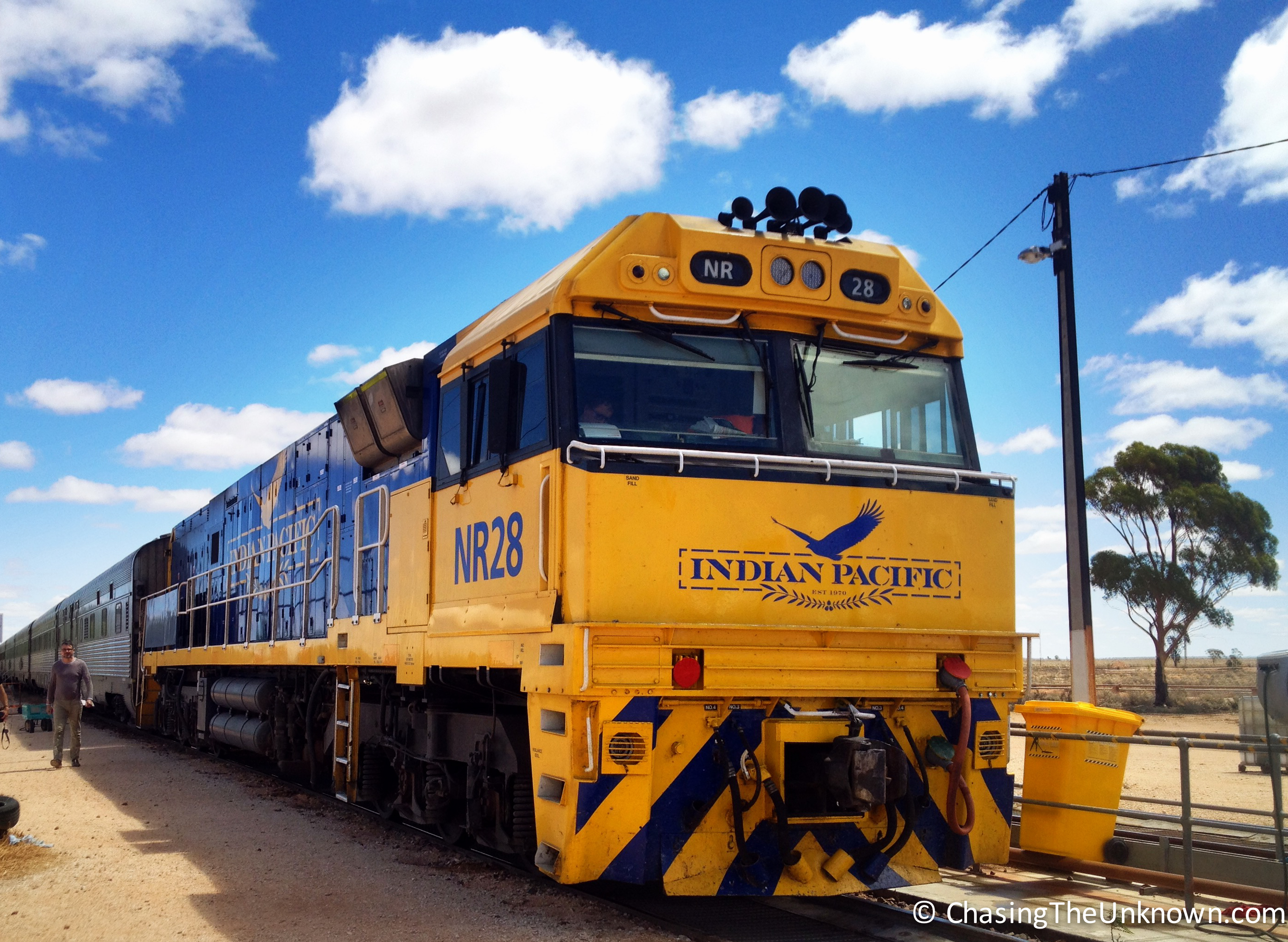 Like seeing the glow worms of Waitomo Cave, riding one of Australia’s great trains has long been on my list of things to do. The romance of traveling across a continent by train, watching the landscape change as the miles tick by, enjoying meals in a dining car, and hopping off for brief stops in the middle of nowhere, what could be better? 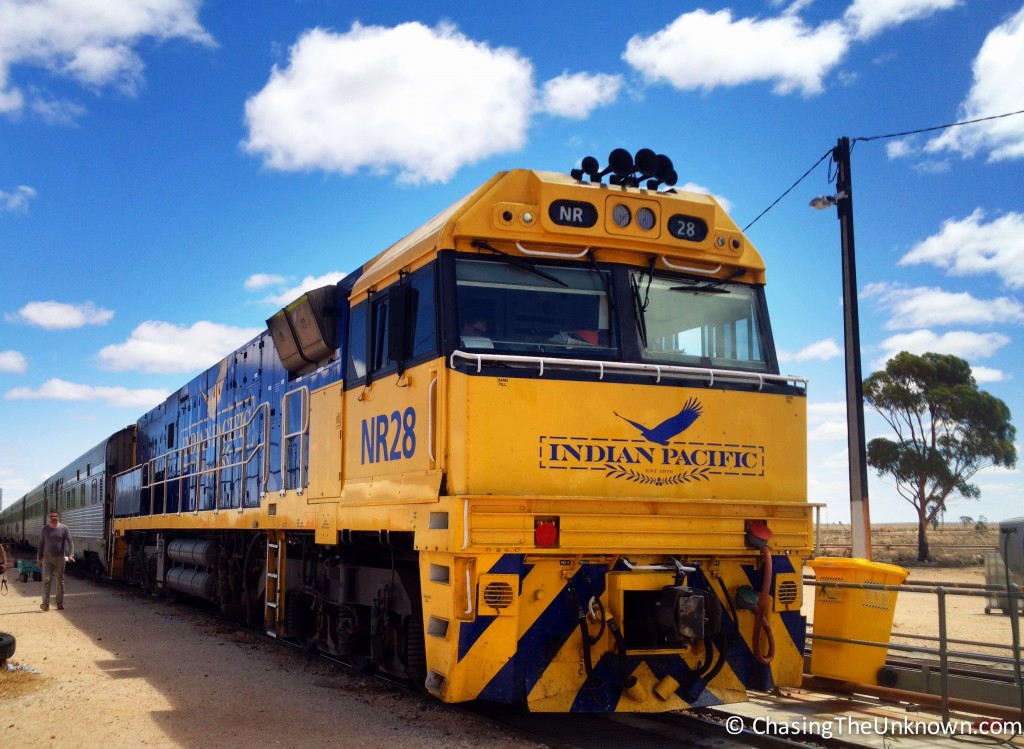 Australia has two well-known rail journeys: the Ghan, which runs north-south between Darwin and Adelaide, and the Indian Pacific running east-west between Sydney and Perth. In an ideal world, I’d take both trains the full run in a sleeper car with meals and drinks included. But as I’d like to have money for other things and my time is limited, I opted to take the Indian Pacific from Perth to Adelaide, booking a “Red Service Day/Nighter Seat” at the “Backpacker” price. For 349AUD (around $265), I had two nights in a reclining seat with the ability to walk around, access to a hot shower, a dining car where I could catch up on off-line writing without the distractions of email or the outside world, and ample time to watch the countryside as we traveled 2,650km (1,647 miles). I scoured the internet for personal stories and information about what to expect but found remarkably little about traveling in the Red car, and even less about doing so after April 2013 when the Red sleeper and lounge service were discontinued. So this post will include not only my reflections but the information I sought before heading to the East Perth terminal to board the train.

The ride was, in some ways, exactly what I expected but in others, far from it. The views are stunning with wide open skies, vast expanses of land, and the occasional animal or, in one case, a train of dead camels. I had hours to sit writing, reading, imagining life for the workers who laid the tracks, reflecting on the size of this incredible country, and generally contemplating life. With the sun beating through the windows, I dozed off a few times, supplementing my limited overnight sleep. But there were few people under the age of 65 in the Red car and most of them kept to themselves, heads bent over smartphones or tablets. I had hoped for a bit of conversation in the café but rarely found a sustainable one. My seatmate and I had next-to-nothing in common and once she started snoring, I was even less interested in working at conversation with her. I expected more backpackers and I wasn’t the only one. Others I spoke with were disappointed to find so few of us and I can’t help wonder why Great Southern Rail isn’t marketing it more to that demographic. In fairness, the best conversation I had on board was with someone who fell into the pensioner category. I also wasn’t expecting the train to stop as often as it did or for as long as it did. Nearly every time a train passed us in the opposite direction, our train stopped for far longer than the time it took the other train to race by. We were only permitted to alight at Kalgoorlie and Cook but the schedule provided on board identified 62 stops between Perth and Adelaide, most of them in the wee hours of the morning. I didn’t mind the stops, I simply wasn’t expecting them.

The train has three classes of service: Platinum, Gold, and Red. Platinum class means private en-suite sleeper cabins with electrical outlets, personalized service, transfers to and from the train, and what you’d expect for first class treatment while Gold has smaller sleeper cabins, some with en-suite toilets and showers. As a Red Service passenger, I wasn’t permitted in any of the Gold or Platinum cars but from what I could see through the windows, they looked great. Both Gold and Platinum include meals, beverages, toiletries, access to lounge/bar cars, and whistle stop tours along the way. People have shared their experiences of the Gold class here and here. The Red car has 48 reclining seats with ample legroom but no footrests, fold-out tables in the armrest, two hot showers (clean towels provided for each passenger), two toilets, and the Matilda Café.

There are three electrical outlets in the Matilda Café and use of a surge protector is encouraged. There are no outlets in the Red car. There is no WiFi and mobile phone service for any provider other than Telstra is non-existent through many stretches of the trip. Purified drinking water is available for free but it’s wise to bring your own bottle. A cup of hot water costs 1AUD so although bringing tea, instant coffee, soup, or noodles can save money over buying train food, there’s still a cost to incur. Food brought along is permitted in the Red car but not in the café (although I certainly brought my own tea bags in with me to buy a cup of hot water and then sat there drinking it). Food sold in the café is simple but filling and surprisingly not overpriced. In addition to what’s shown on the printed menus, there are snacks, yogurt, fruit, and dinner options that change daily, always including one vegetarian dish. If you’re vegan, I strongly suggest bringing your own food. Air conditioning on my trip was minimal so a sleeping bag was unnecessary but others I’ve spoken to had the opposite experience. Bringing a blanket or sleeping bag and a pillow or something to use as one is highly recommended. The Red car attracts a high number of pensioners (the pensioner fare is only 438AUD to travel Perth-Sydney or vice-versa) and in my experience, older people are the loudest snorers so ear plugs aren’t a bad idea. 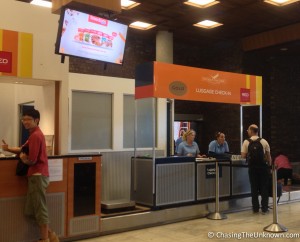 Check-in, at least in Perth, is quick and easy. It closes one hour before scheduled departure but I found arriving 90 minutes before departure was unnecessary as the process takes less than a minute and I never saw a line. Passengers are asked to check large bags and carry on only small hand luggage. I recommend bringing at least one bag that stands at a good height to prop up your legs while sleeping. Seats R27 and 28 have no window so if assigned one of those at booking, I strongly urge contacting Great Southern Rail to change it. Staff on board will allow people to change seats but window seats are obviously coveted. Buying a ticket at the backpacker rate requires possession of a YHA, Hostelling International, Nomads, International VIP Discount Card, ISIC, International Youth Card, Peter Pan Travel Card or Australian student card but no one ever asked to see mine. If asked for it and one doesn’t have it, the full Red fare is allegedly charged. For 19AUD, the Nomads card seemed worth buying as the difference between backpacker and full fares is 240AUD. There are rail passes for two or three months of travel that can be a great deal for someone with the time to take both the Indian Pacific and the Ghan.

Because the train crosses time zones and South Australia uses Daylight Savings Time while Western Australia does not, the staff work on “train time.” The first night out of Perth, everyone is told to set watches forward one hour after leaving Kalgoorlie in the middle of the night. The second night, a 90-minute jump ahead was made at 6pm. Coupled with early morning announcements, these time changes mean reduced sleeping hours so be prepared to finish the trip tired.

An 80AUD ($61) whistlestop tour is available in Kalgoorlie that includes a visit to Hannan’s North Tourist Mine complete with a chance to see the “Super Pit,” a massive gold mine. On my trip, the Super Pit was apparently closed. I chose to walk around town instead. Everything was closed but it’s a pleasant place to wander and feels very safe. A gentleman I spoke with who took the tour said it was a complete waste in the nighttime and was sorry he’d spent the money. During daylight hours, I’m told, it’s a good experience.

On day two, the train stops at Cook for 20-45 minutes while water is pumped onto the train. Free maps for a self-guided walking tour are supposed to be available but when I inquired, I was told: “You don’t really need one. Just don’t enter any buildings. Many of them are condemned. And don’t go over the tracks to the other side of the train, don’t go around the train at either end or try to go under it.” Cook is an odd place. Established in 1917, the town is now deserted. There are a few houses that might actually have residents but there are no signs of life. Until 18 months ago, a souvenir shop sold trinkets and souvenirs to passengers coming through but someone apparently decided that was a bad idea. I remain baffled that no one in Kalgoorlie or Cook opens up during train stopovers to make a bit of cash. 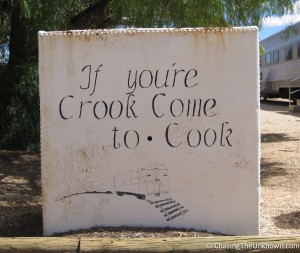 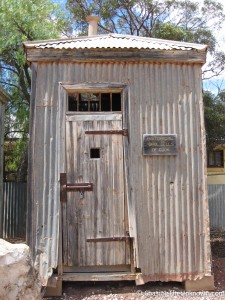 I left the train in Adelaide where people could pay 20AUD for transportation to and from the Adelaide Central Market which can be reached on foot in about 15 minutes. Whistle stop tours between Adelaide and Sydney are available at Broken Hill, each for 56AUD: Pro Hart Gallery or Broken Earth. 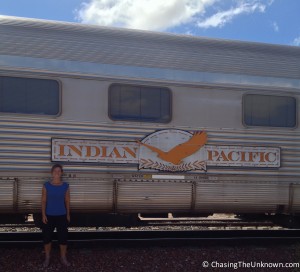 Someday, if I have the money, I’d love to finish the journey by traveling Sydney to Adelaide on the Indian Pacific, spend a few days exploring wine country around Adelaide, then up the Ghan to Darwin, stopping in Alice Springs for a week on the way. I’d want to do so in the upper classes of service, ideally taking the one night journey from Sydney to Adelaide in Platinum, then Gold on the Ghan. I doubt I’ll ever have the funds for all of that as I have a tendency to spend my money on diving instead of anything else but I can dream! Although it wasn’t as social as I’d hoped it would be and I remained sleep deprived for a few days following the trip, I really enjoyed my time on the Indian Pacific and would do it again in a heartbeat.

All information is correct at the time of writing in March 2015 but prices, tours, etc. are subject to change. The Man in Seat 61 provides a great deal of information about the Indian Pacific and other trains but the most updated details can be gleaned straight from the source: www.greatsouthernrail.com.au.

12 thoughts on “Riding the Indian Pacific from Perth to Adelaide”