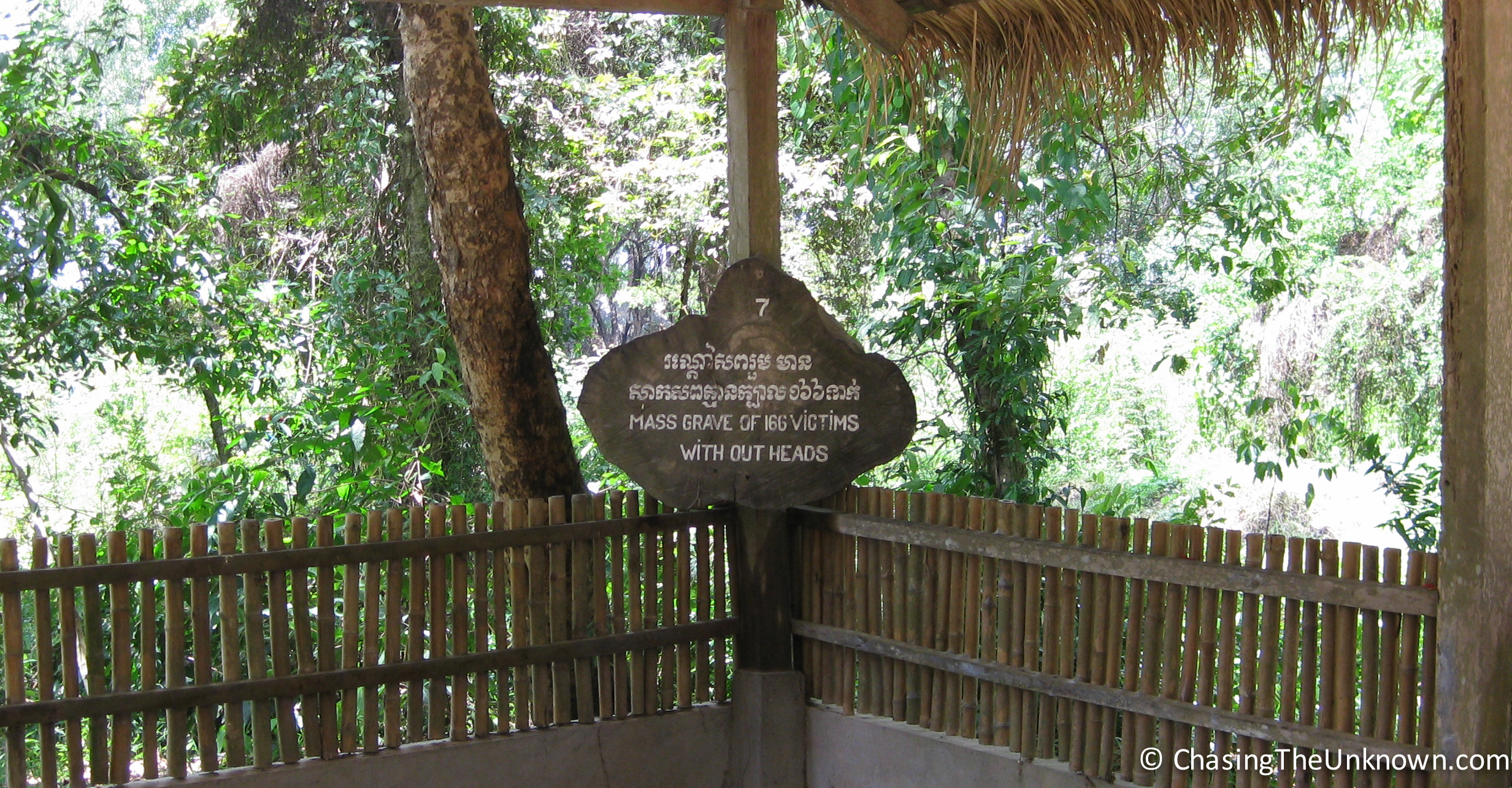 Jostling in the back of a tuk-tuk, dirt flying in our faces from the bumpy road, the pungent odor of decomposing rubbish permeates the air: the surrounds of Phnom Penh unfold as we bump along. A young boy in shorts spots us from his open-air home, “Hello!” he calls out with a heartwarming smile stretching from ear to ear, cheerfully waving as we go by. Such joy amid such squalor, I think. The boy’s contagious grin spreads and I find myself inhaling dust as I return his greeting. The road curves and the trees begin to close in on us. Our driver weaves around the largest holes and humps but we still bounce about on our cushioned bench. What hell this must have been at night, in the back of a pick-up truck, chained to other prisoners, starved, tortured, on the road to certain death. Emaciated white cows chew meager patches of grass. The sun beats down on an abandoned government building. A weathered old man rides by on a bicycle. How did you survive? Were you forced into labor, scavenging insects for food? Did you live in this area? Did you know what was happening here? Were you one of them? By choice or by force? My mind races as we cover the 17 km from Phnom Penh to Choeung Ek, one of many Khmer Rouge killing fields.

We buy tickets, don headsets, nod to each other, and start our separate journeys, each lost with her own thoughts, pausing and re-starting her audio guide. The voice tells me to look out as I walk for scraps of clothing and fragments of bone, both still washed up by the rains. It’s a beautiful June morning. Grass is green, trees look healthy, and a few Cambodian chickens pick at the ground. If I were anywhere else, I’d be smiling. 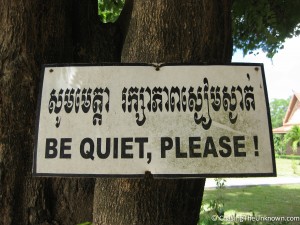 Tourists gather at each numbered post. Many speak, ignoring the posted signs. A guided group shuffles along, stops, listens to the guide, poses for photos, some crack jokes while others turn their heads in disgust. When they move on, silence reigns and a heaviness settles in the air. I walk, afraid to take many photos: it feels disrespectful. Should it? I wonder. The monument and museum, the paths and sign-posts, all were built so the atrocities committed here will not be forgotten. Around me, visitors snap away. How often will you look at these photos? Are you posting them on Facebook? Do you really want to look back at your time in Cambodia and be confronted with images of a tree where soldiers swung babies by the legs to smash their heads and the neighboring ditch where the lifeless bodies were unceremoniously thrown? I’m fighting tears and you’re taking pictures?

The audio guide changes voices and stories from survivors of the Khmer Rouge stop me in my tracks. I find a bench, rest my eyes on the nearby pond, and listen. The human will to live overwhelms me. I try to imagine being here with the jarring sounds of Khmer Rouge propaganda booming from loudspeakers, men and boys in black running around with their red-checked kromas barking orders to prisoners whose only crime was an education or having the wrong job, the wrong family, the wrong face. I think of the soldiers whom I hope hated themselves for carrying out orders to bludgeon the innocent to death, almost certainly faced with their own death if they disobeyed. My heart, already shattered for the many innocent victims, breaks a little more for those foot soldiers, countless of them killed no matter how many orders they followed. “To kill you is no loss, to keep you is no gain.” 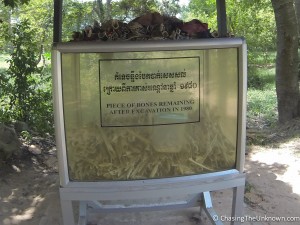 My path crosses once more with an Australian couple. She wipes her brow again, looks around, boredom written all over her face. He ambles slowly, engrossed in the audio, paying her no mind. She pulls her iPhone from her pocket, occupies herself as they walk. I feel for him, wonder if he’ll have anyone to talk about this with, if he is content to have this solitary experience in her company. Everyone handles this differently, I remind myself. Look away, take pictures, scribble notes in your journal. Do what you must to get through this.

I’ve seen the holes that served as mass graves, the boxes filled with bones still being collected, the Chinese markers that were destroyed when the Khmer Rouge took over, the field no longer home to a well-marked cemetery and fruit trees. All that remains of my visit is the memorial stupa. 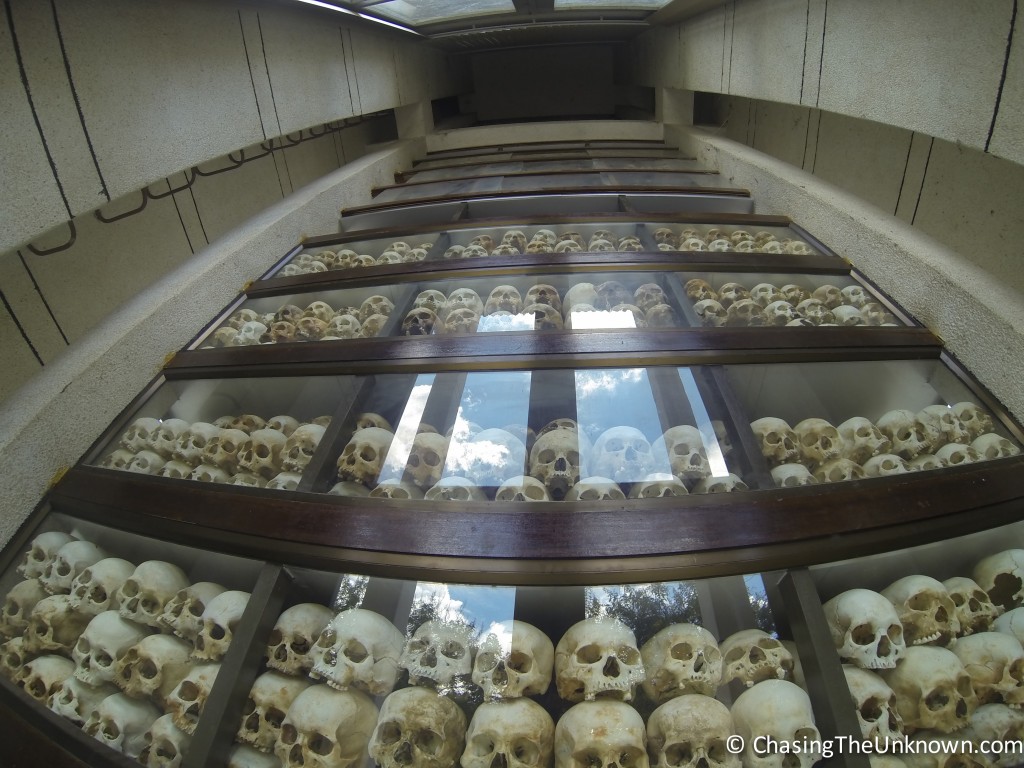 Filled with tiers of bones and skulls, some revealing the damage inflicted by murderers, others marked by age range or gender, this beautiful and haunting monument is a testament to the resilience of the Khmer people and their desire to warn the world that genocide can occur anywhere, any time. I stop in front of the origami cranes, flashbacks of those hanging in Hiroshima, moved by this international gesture of peace.

We bump along, heading now to Tuol Sleng Genocide Museum at S-21 Prison: a former high school used by the Khmer Rouge to house and torture more than 14,000 people. Jen and I split up again, no audio guides this time, just us, wandering around. I enter a former classroom. A rusty bed frame sits in the middle. “DO NOT TOUCH” Who would want to? Rust-colored stains stare at me from the floor and walls. A photo shows the room as found in 1979, a mangled corpse falling off the spartan metal frame. My breaths are ragged. I swallow, move on. Room after room, more of the same. Was it better or worse to be housed in one of these rooms alone? Knowing you’ll face torture and interrogation, senseless accusations, inevitable death but space to stretch your limbs, if you can. Another building, more former classrooms. Photographs. Men. Women. Eyes show fear. Defiance. Anger. Some people smiled. They did nothing wrong!

I need a break, go outside. Barbed wire, strung up to prevent prisoners from jumping out windows. Large cisterns in the courtyard; wood frames raised above them. Drawings show their use. Men hanging by their feet, interrogators yelling, threatening, dunking heads in the water. Photographed faces swim through my head. I breathe, go back inside. 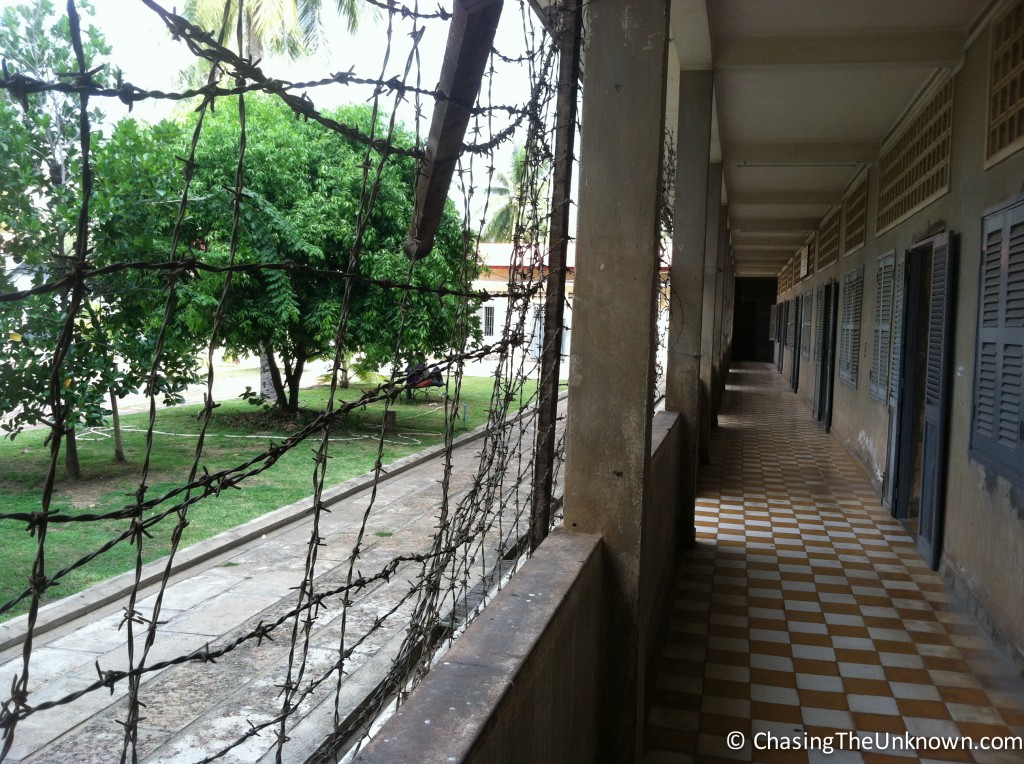 More photos. Mostly men. Grown women, one with a baby. And then, children. Brought here with their parents, too young to understand what was happening. My eyes fill with tears and my vision blurs. I walk, I look. Tears run down my cheeks. I find Jen and we walk the rest of the museum together. I do not want to be alone.

Brick cells on the ground floor classrooms. How many people were forced to sleep in each of these? The heat is intense and we’re the only ones in this wing. How awful this must have been. The smell. The sounds. The constant threat of torture and death. We walk upstairs. Wooden cells still line these rooms. I feel trapped. The humidity is greater, the heat stronger. The sun is shining but it’s dark in here. Signs state these were single cells. Were they? Did they move prisoners so quickly from here to Choeung Ek that solitary cells did not become doubles or triples? The wood has expanded. Are the walls bulging out? I force myself to look, just for a moment. I race downstairs, back onto the grounds where students once took recess.

More photos, drawings, stories from the seven surviving prisoners found by the Vietnamese. Tales of those who managed to escape in the chaos that took hold of Phnom Penh as the Vietnamese rolled in. I am, once more, in awe of the human spirit. They lived through hell but they returned. To work, to educate, to remind us we must not forget.

We visited Choeung Ek and S-21 at the beginning of our time in Cambodia. What we saw that day will haunt us forever. But equally powerful are the memories of people we met here. Warm, welcoming, friendly, happy people of all ages, eager to talk with us, to show us this beautiful country they call home. A chilling monument at the Buddhist temple Wat Somrong Knong near Battambang sums it up far better than I ever could:

The full extent of Cambodian’s tragedy will never be known. The remains of some of the victims of this genocide may never be recovered nor their murderers identified.
But the gentle and forgiving Khmer, an energetic and optimistic people will now walk confidently through the well of shadows to reclaim their ancient culture and restore this beautiful land to become again, the legendary paradise of celestial apsaras.

4 thoughts on “Not for the Fainthearted: A Visit to the Killing Fields and S-21 Prison”