“There’s a path across that bridge. I want to see where it goes.” Paul, my British traveling companion for the day, remarked casually. The bridge is at the base of Kuang Si waterfalls – or in the middle of the falls, depending on how you view it. The path opposite us looked like a muddy, wet tangle of stone steps created by years of erosion, tree roots, and the odd brick or two. Before I knew it, we were climbing up a steep embankment, umbrellas in hand, finding our footing in the middle of rivers running down from the top of the falls. In the rain. It was, quite possibly, one of the most dangerous things I’ve done on this trip. At least, it felt more dangerous than sky diving over Fox Glacier or SCUBA diving in Vietnam off a boat where no one but Jen knew my full name and safety standards were essentially non-existent.

The path you see at the start of this video is the one we went up; the higher we went, the larger the stream coming down.

In dry season, I suspect the path to the top of the falls is fairly easy and the view from the top lovely. Apparently the water is almost blue then. But it’s rainy season and we were there after a solid day of heavy rain so the falls were overflowing with a muddy deluge. Paths and bridges were flooded, disintegrating railings were loose, and at any number of places, losing one’s footing would mean near certain death. Paul was only half-joking when he asked if I had any messages I’d like him to relay to my family should the need arise. 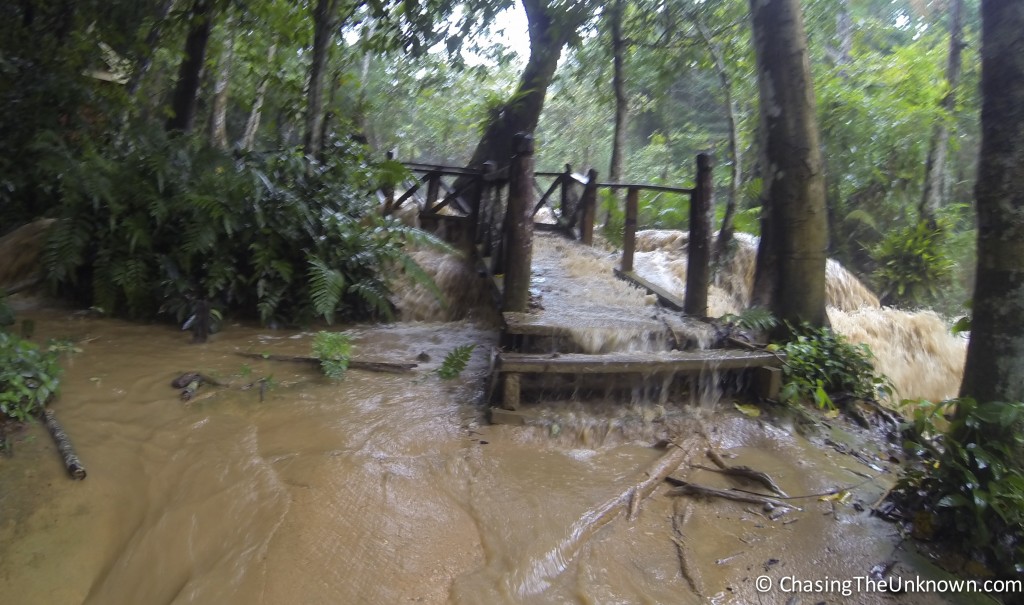 In myriad countries, barriers would have been erected on a day like this blocking tourists from going all the way up. I’m thrilled we went but also happy to have stopped where we did: far from the edge of the falls. What should have been a simple trip to see a nice waterfall turned into an adrenalin rush and a decent quad workout. In the end, it was one more day when I didn’t let the rain stop me from having an incredible time or from smiling so much my cheeks hurt.

Kuang Si Waterfall is about 30 km from Luang Prabang and the easiest way to get there is to share a jumbo tuk-tuk with as many tourists as the drivers in Luang Prabang can find. The sun was shining when we set out from downtown but by the time we arrived, the sky had opened up and we knew we’d be drenched in a matter of minutes. Entrance to the falls costs 20,000 kip (about $2.50) and the path is relatively well-marked. One first passes by Tat Kuang Si Rescue Center and although we saw some of the rescued bears, my photos in the rain didn’t come out so you’ll have to take my word for it: Asiatic black bears are sort of cute.

Having spoken with people who went to Kuang Si three days before we visited, even in rainy season if the sun is out and it hasn’t rained for a few days, the path can be quite safe and someone runs a raft across the top of the falls so you can walk one direction along a paved road. Easier but probably a bit less fun…

6 thoughts on “An Unexpected Rush at Kuang Si Waterfall”