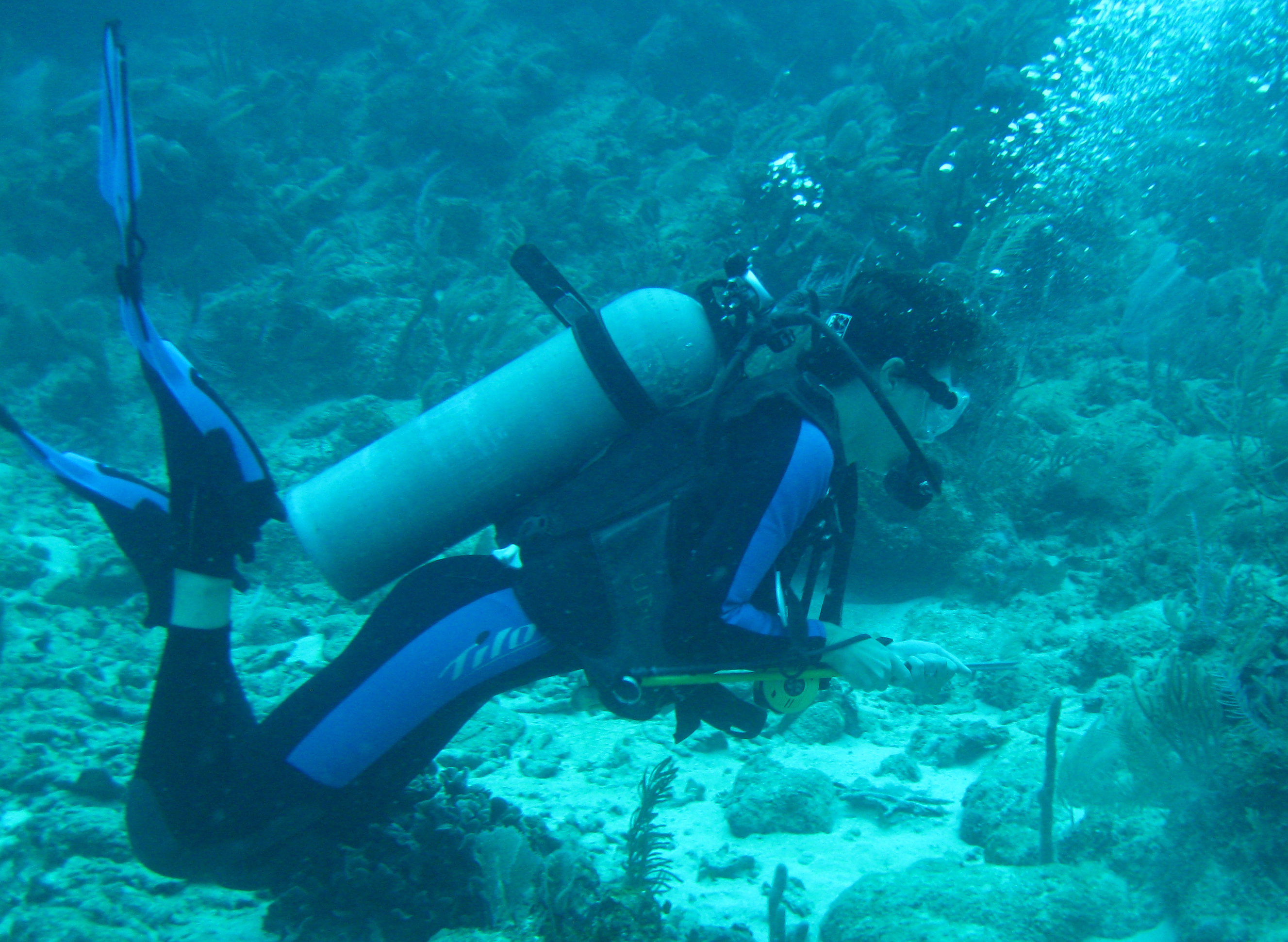 One week ago, the only living things Jen had killed were insects and arachnids, things that crunched beneath a shoe or flattened between two hands or a fly swatter. As of today, she has taken the lives of four lionfish, two of which we’ve eaten. A third is sitting in our refrigerator as we write and will make a lovely appetizer this evening.

The lionfish is not native to the Caribbean and although it’s beautiful to look at, it’s a pest to these waters where there are no natural predators. The lionfish has a tendency to eat baby fish on the coral reefs, resulting in no adult life and, naturally, no more babies. Divers from the Bahamas tell stories of coral reefs, once teeming with fish, completely barren of all but the lionfish. To combat the problem, Caribbean governments have created exceptions to spearfishing bans, allowing divers to carry a Hawaiian Sling for the sole purpose of hunting lionfish. 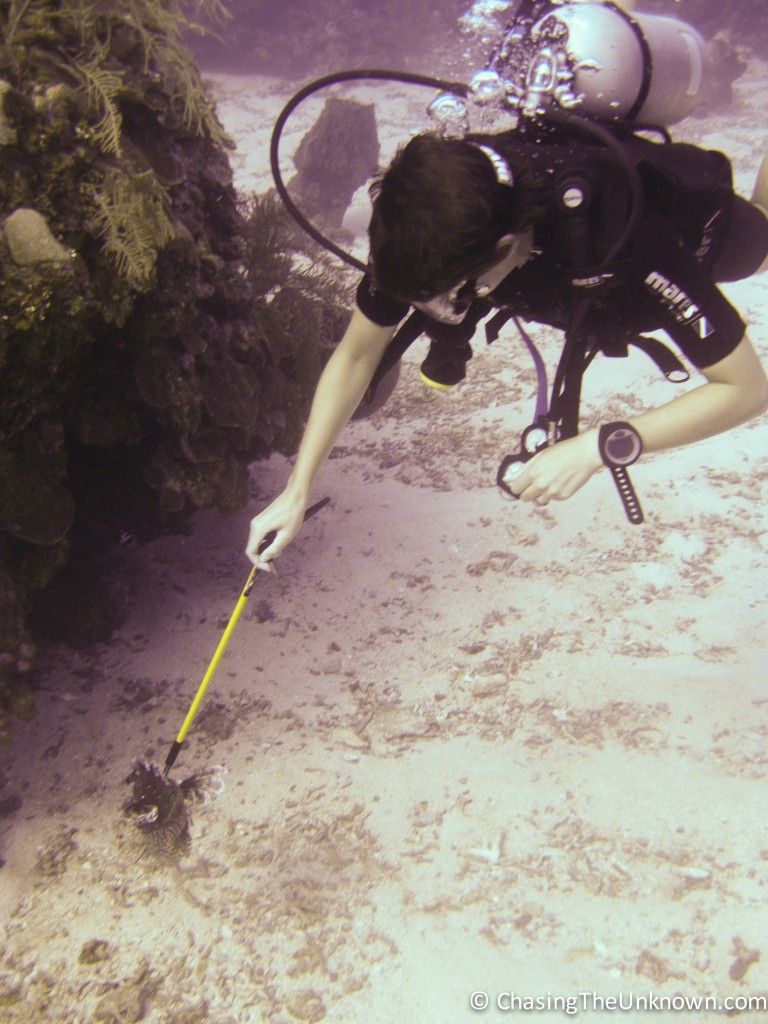 Utila Dive Center offers a unique specialty in Caribbean Lionfish Containment that sounds like a great class but each for her own reason, neither of us enrolled. On Roatan, where we spent six days last week, the Roatan Marine Park offers a basic licensing class that takes only a few hours and ends with a Bay Islands spearfishing license and ownership of a spear. Jen spent a bit of time in the classroom, discussing the various theories of how the lionfish arrived here, how to handle the venomous spines safely (don’t touch them), what to do if you come into contact with the venom (hot water, lots of it, then wait it out), and the importance of protecting the coral reef and other fish while trying to spear lionfish. Then she went into a confined area only 10-15 feet deep wearing full SCUBA and encountered a wall of nooks and crannies with coconuts hiding throughout. A natural, Jen swiftly speared the five coconuts necessary to prove her skills.

The following morning we went out with Karl of Roatan Divers who brought along his own spear and a container to hold any lionfish big enough to bring back to land. I expected Jen to be good at lionfish spearing: when we dive, she’s excellent at finding creatures inside crevices and hiding in the coral, has very good control of her buoyancy, and has strong hand-eye coordination on land and in the water. I was right: each lionfish she’s seen since earning her license she’s killed. What I don’t think either of us expected was the rush we both feel each time she kills one. For me, it’s a surge of pride in her skill and psychological acceptance of what she’s doing. For her, it’s one hell of an adrenaline rush. 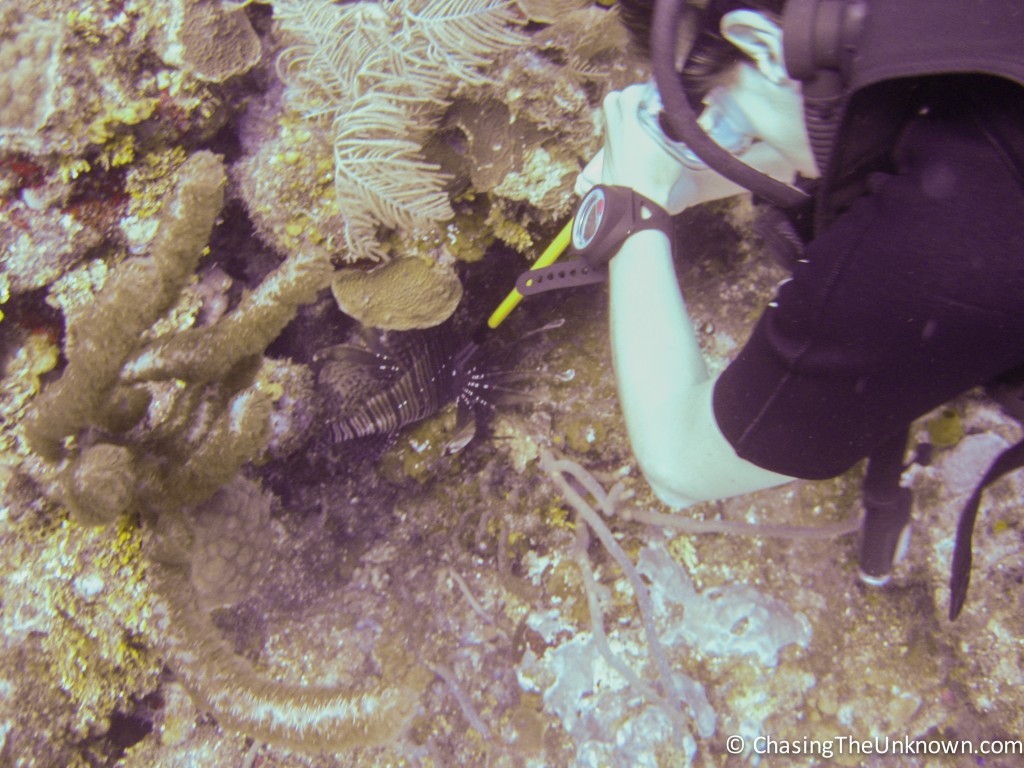 Earlier in 2013, we spent the better part of a week on Cayman Brac where divemasters routinely carried a spear. Dive after dive, we watched divemasters spear lionfish and on one of those, we got some great photos as grouper made a meal of the speared fish. In Jen’s words, “I thought that was the coolest thing and I was in awe of our divemaster.” On Utila, groups of certified Lionfish Containment divers routinely go out for “lionfish roundup” dives and at least once a year, the dive shops come together for a friendly competition of Lionfish Derby. Every time we saw one of the boats come back, Jen watched in envy as divemasters cleaned and fileted their catch on the dock, preparing ceviche with their bounty. Neither of us has hunted or gathered our own food before – fruit picking and vegetable gardening don’t count. For Jen, learning to spear lionfish meant a foray into a more primal way of living: one with no middleman or cost standing in the way of a meal. She long ago perfected the art of cutting down coconuts and securing a drink of coconut water. Hunting a protein source was a far more exhilarating endeavor.

Killing the lionfish is the first part of the joy, eating it is the second. For those of you who know us well, you know that I was vegetarian for about ten years before adding fish into my diet ten years ago. Jen’s diet has run the gamut from vegan through full omnivore and although she loves sushi, she’s more likely to enjoy land-roving animals on her plate than swimming ones. But diced into a ceviche, pan-seared, turned into tacos, blackened with Cajun spices, every way we’ve eaten it, lionfish is delicious. Maybe it’s the knowledge that every time we eat it, we’re helping to eradicate a pest or maybe it’s because we know someone thoroughly enjoyed killing it – whatever the reason, we’re both thrilled to find lionfish on our plates.

What do you think, if you were here, would you have the heart to shoot a spear into a lionfish head then take all steps necessary to ensure its death?