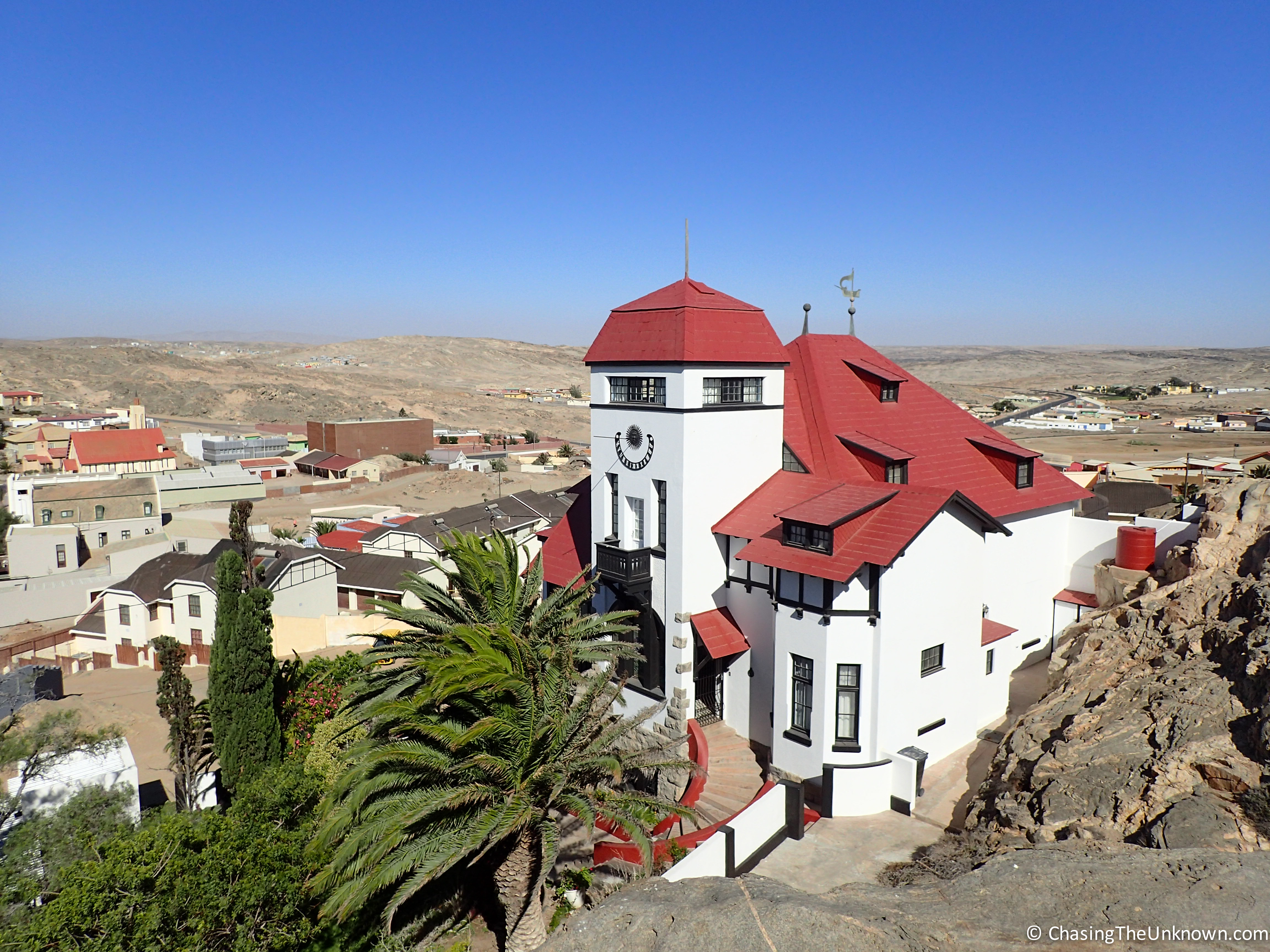 According to Lonely Planet, Lüderitz “has long been a traveler’s favorite.” I’ve consulted Lonely Planet intermittently for nearly twenty years and this statement is further proof of the series’ declining reliability and usefulness. It’s an interesting place to stop and definitely worth a visit when traveling through Namibia but by no means will it make any list of this traveler’s favorites. Nearby Kolmanskop, however, is a different story. 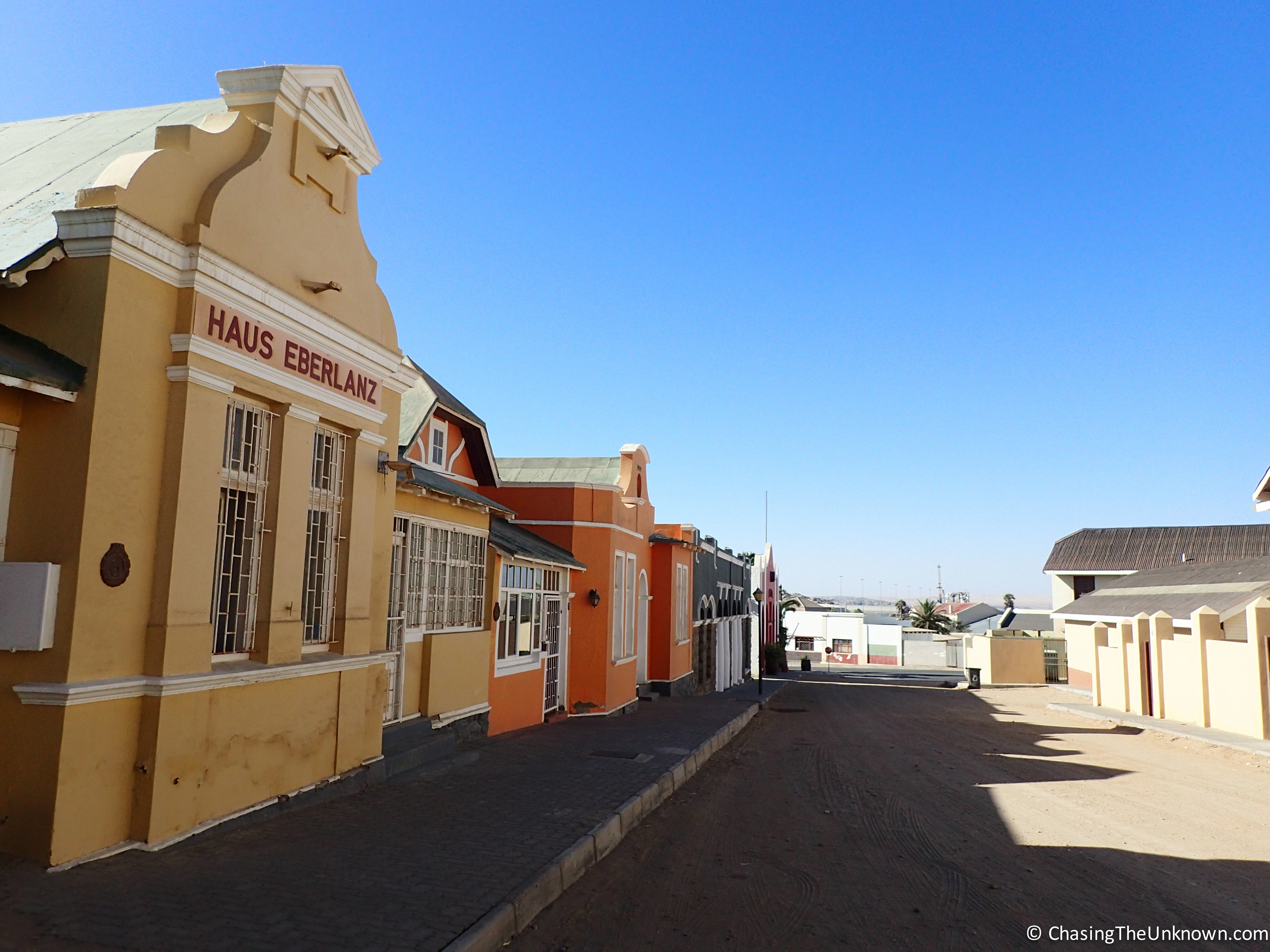 Walking around and checking out the town’s colonial German architecture takes less than an hour. A visit to historic Goerke Haus and Felsenkirche add up to an hour but can be fully experienced in half that time. I didn’t make it to Diaz Point or elsewhere along the Lüderitz Peninsula as locals advised it not worth visiting given the intense winds in the area. The winds are some of the strongest I’ve ever encountered: stronger than Cape Town, South Africa and Wellington, New Zealand. Residents claim the wind dies down from time to time, making Shark Island a beautiful place to camp and Agate Beach a relaxing spot to spend an afternoon. 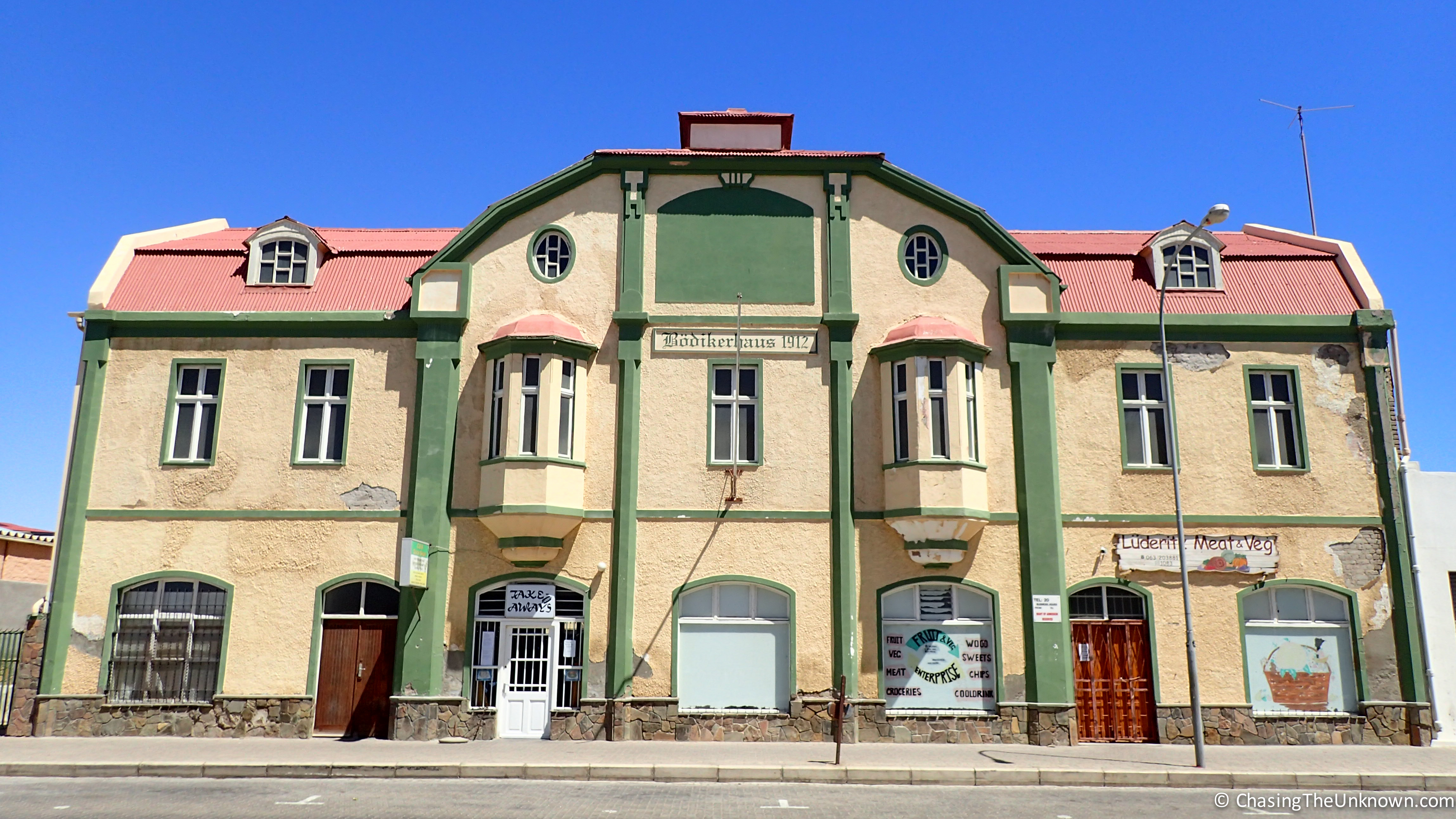 A small number of experienced kite surfers make the most of the wind when they can but fishing is the only consistent water sport available in Lüderitz. Diving is apparently pointless as the visibility is terrible and the water, fed by the Benguela current from Antarctica, makes the water downright frigid. There are limited places to eat, drink, or shop in town, especially on weekends when nearly all stores close at 1pm on Saturday and don’t reopen until Monday morning. The streets are often empty, completely void of people, animals, or any other form of life. Everyone I encountered in Lüderitz was friendly and although it was clear that a bit of foreign money was truly welcomed, I never felt any hard-selling or that I was being charged a tourist price. Yet even without wind, I can’t imagine anyone needing to spend more than one night in town or deeming it a favorite. 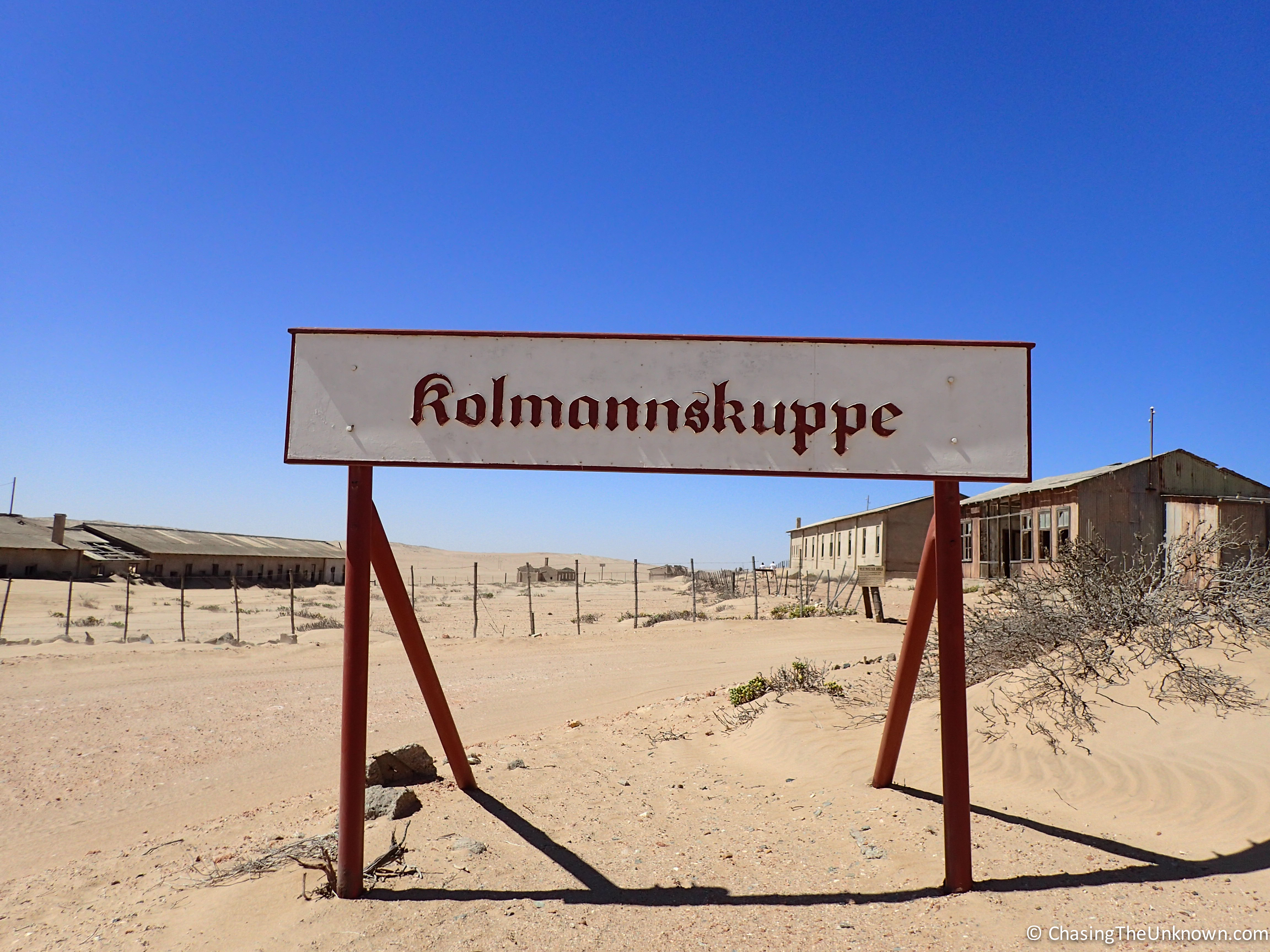 Nearby Kolmanskop, an abandoned diamond mining town on the edge of Sperrgebiet National Park (the “forbidden zone”) was the highlight of my two days in Lüderitz and in retrospect, I should have given it more than the two hours I did. Unlike abandoned mining towns in Colorado, where I grew up, Kolmanskop was abandoned less than 100 years ago, in the 1950s, so there are indications of modern life that one doesn’t see in the Old West. The town had its own power plant and a building dedicated to making freshwater ice from salt water. Each household received a daily block of ice and 20 liters of freshwater per person. A bowling alley and bar provided a nightly pastime while a larger hall provided a venue for gymnastic displays, music performances, and other entertainment. Today, that hall is the most maintained structure, home to photos, information, an exhibit dedicated to diamond smuggling methods, and other visitor resources. A large hospital still has a few toilet bowls and tile floors indicate which rooms were operating theaters.

Also unlike mining ghost towns in the U.S., visitors are allowed to wander unaccompanied through collapsing buildings and to take advantage of any photo opportunities that strike their fancy. The fierce winds of Lüderitz are just as strong in Kolmanskop and sand is taking over the town. Of all the crumbling buildings, we were instructed to stay out of only one. In the rest, we could climb over dunes, try our luck on rotting stairs and floorboards, and decide whether to step out an empty door frame into the desert below. 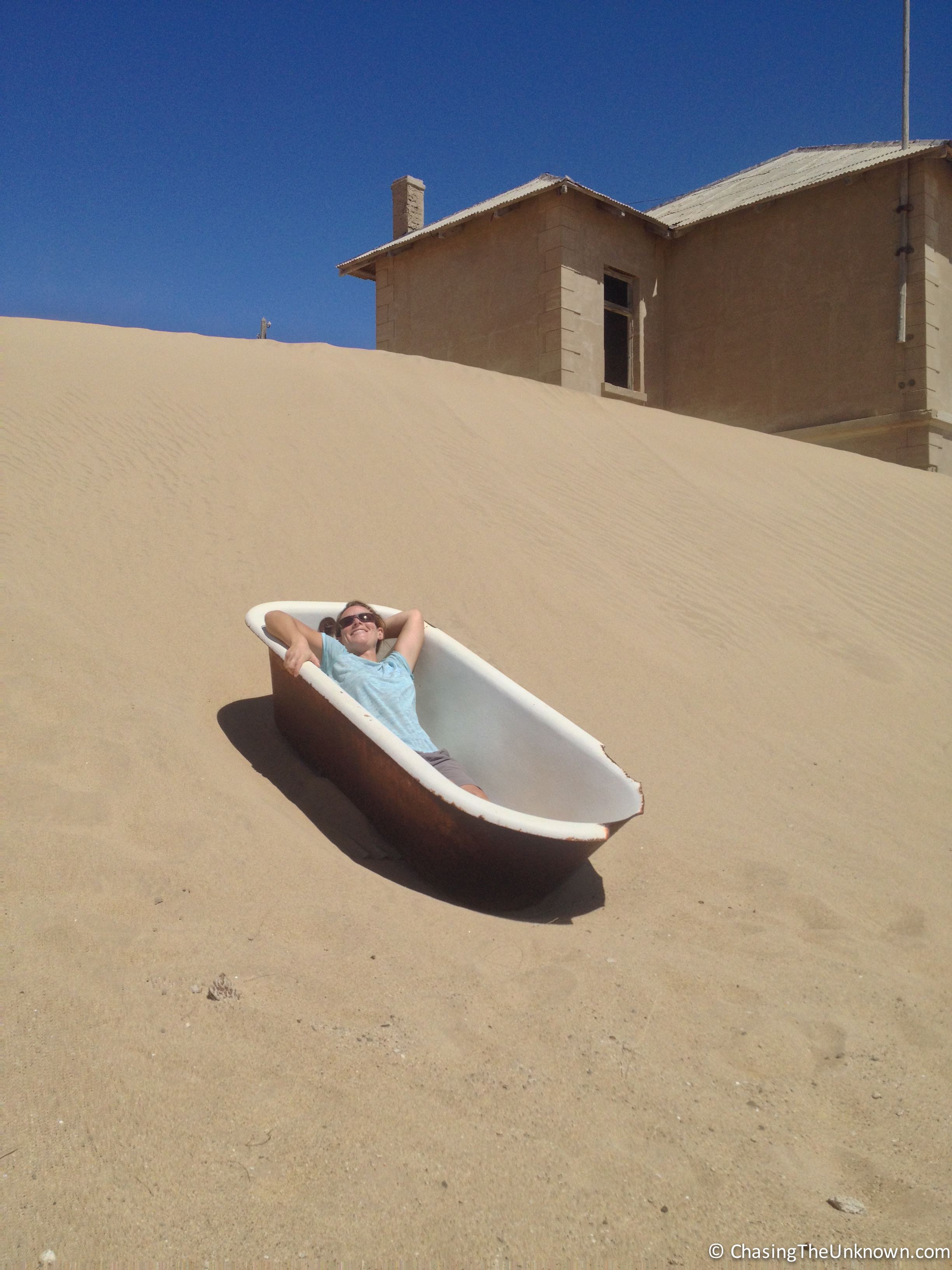 Residents of Kolmanskop were paid in diamonds, an amount equivalent to approximately $200,000/day. The working conditions were harsh with blazing sun, howling winds, and sand slowing everything and everyone. According to tour guides, nearly every resident spent that money in Namibia and most returned to Germany without any substantial savings. One woman, the town’s only shopkeeper, managed to bring her fortune back to Europe. 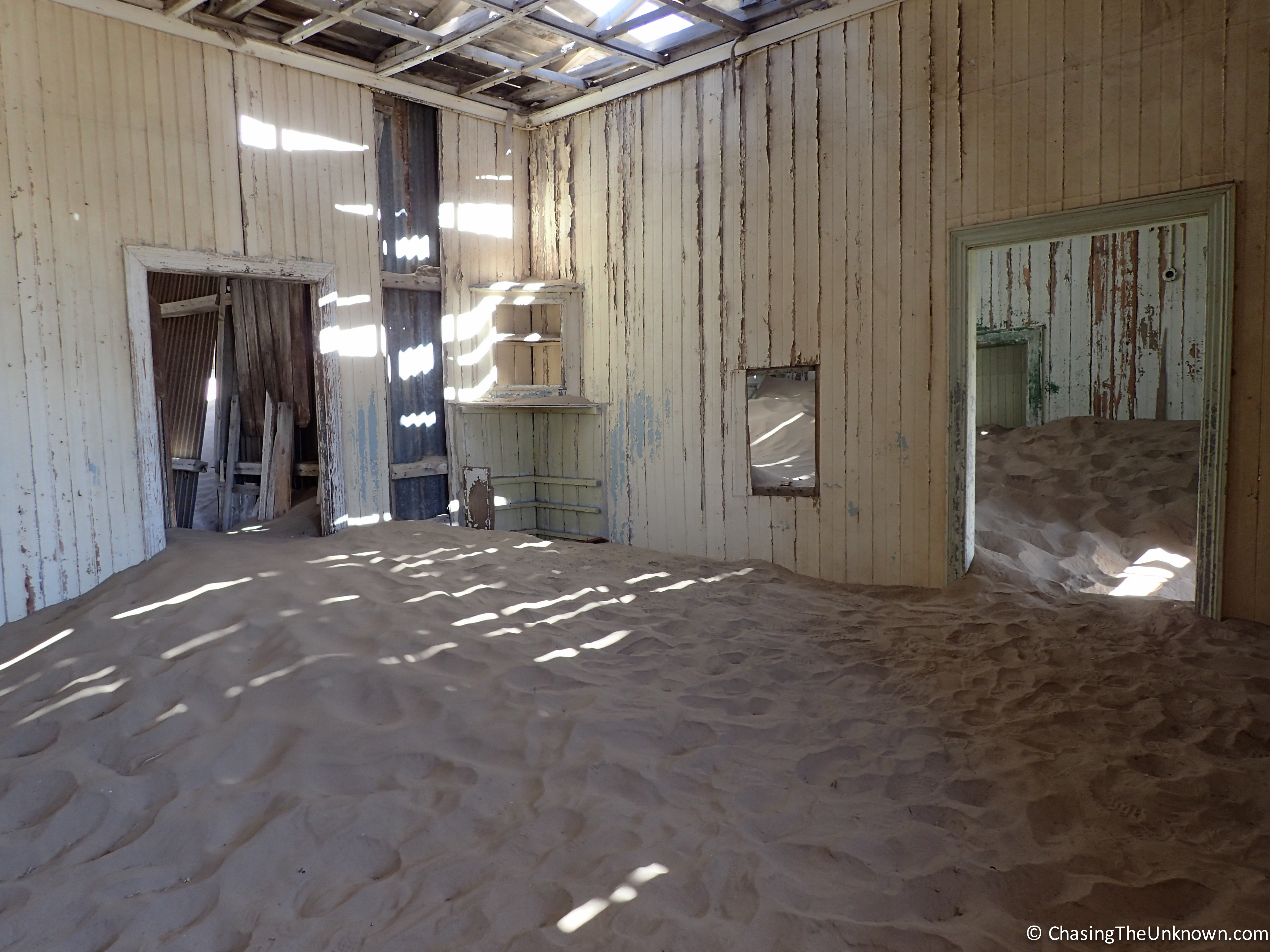 Finishing this post weeks after having left Lüderitz, I begin to look back with rose-colored glasses and wonder whether I’ve been too harsh on Lonely Planet. The people were friendly, the architecture and history were interesting. But having now visited so many other incredible places in Namibia, I remain confident that Lüderitz will not find a spot on any theoretical list of favorite places I may create.

Lüderitz can be reached along a tarred road from Keetmanshoop or by a combination of gravel and tarred roads along the edge of Sperrgebiet National Park. Cruise ships stop by a few times each year and, according to people I spoke with, the town comes to life on those days as people come to sell their wares. Unemployment is staggeringly high and much of the population is transient as workers in the diamond and shipping industries base themselves in town for stretches at a time before moving on. While diamonds are no longer mined in Kolmanskop, mining continues in the Atlantic Ocean just offshore of Lüderitz. A nearby zinc mine necessitates an active port in Lüderitz but compared to Walvis Bay, the nation’s primary port, it’s a sleepy one.
Kolmanskop is open to visitors between 8am and 1pm daily at a cost of $N80 (about $5 at the time of posting) which includes an optional tour in English or German. A permit to enter the town before 8am or after 1pm costs upwards of $N200 ($13). There is no public transportation to reach Kolmanskop but presumably a taxi could be arranged in Lüderitz for the 9km drive.