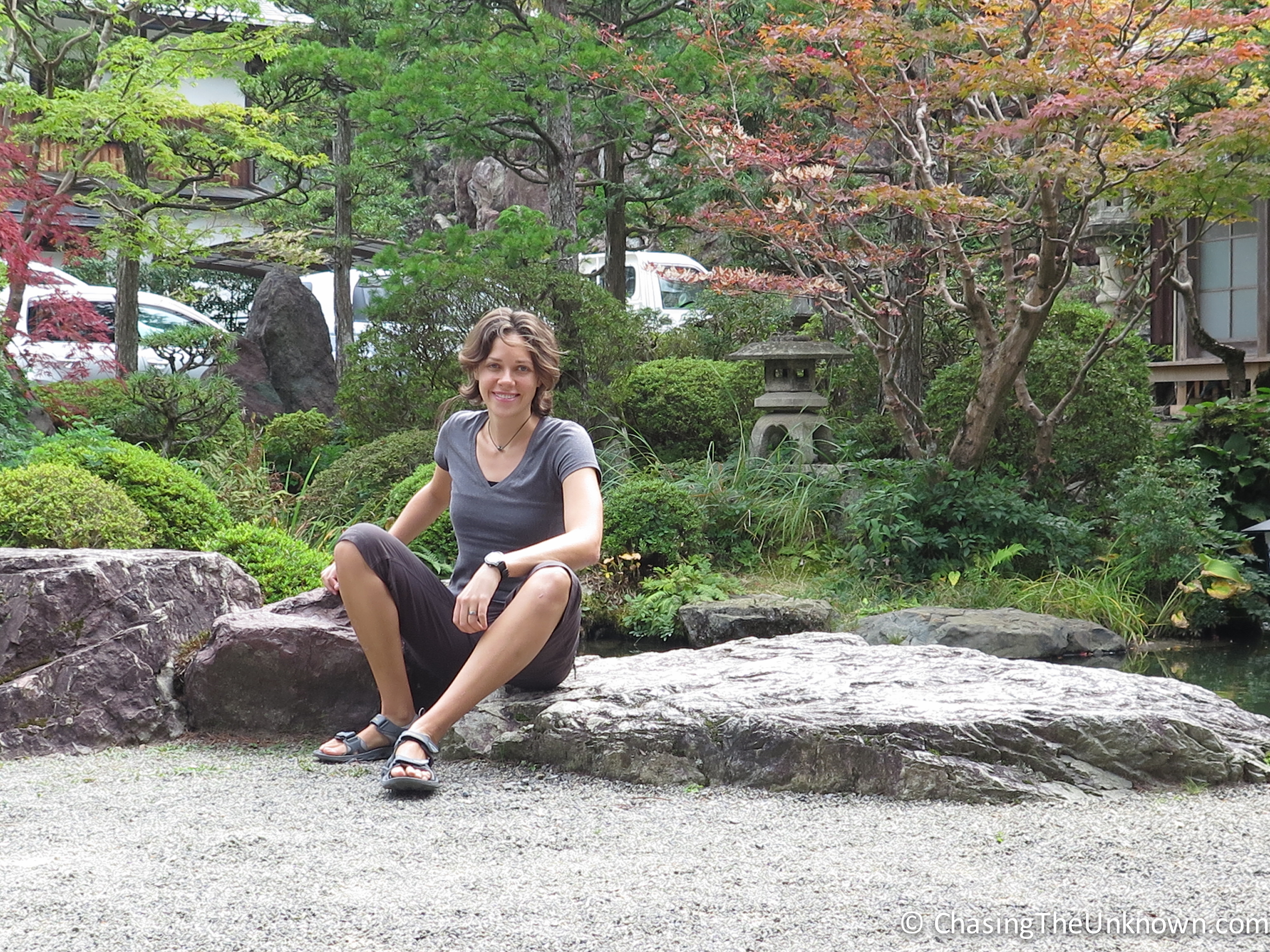 For 5 days and 4 nights, I stayed in the Koyasan (Mt. Koya) area of Japan, the center of Shingon Buddhism. The thing to do here, besides visiting the multitude of Buddhist temples, is to stay at one (or two, in my case). Temple lodging, or Shukubo offers guests a taste of a monk’s lifestyle, eating vegetarian (vegan, actually) monk’s cuisine (shojin ryori) and attending the morning ritual and prayers. Around fifty temples offer these services to pilgrims and visitors.

When I arrived at Ekoin, my first temple, I was struck by how absolutely stunning it was. The temple and grounds were meticulously cared for and quite breathtaking. There were several gardens, a koi pond and benches to sit and take it all in. It was going to be the perfect setting for me to relax and reflect. I was greeted by a monk who told me the rules and showed me around. I had an entire room to myself, which was on the 2nd floor, overlooking one of the gardens. 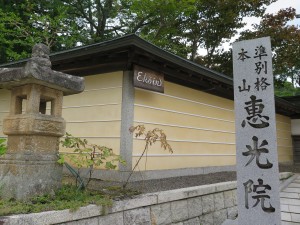 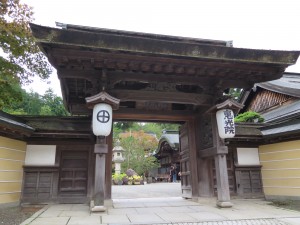 I attended a meditation “class” in the afternoon where I was joined by at least 25 people, both Japanese and Westerners. We learned Ajikan meditation. Ajikan literally means “watching or meditating on the character A,” which symbolizes Dainichi Nyorai (the Cosmic Sun Buddha). Dainichi Nyorai is the supreme Buddha in Esoteric Buddhism, which means the truth and fundamental of the universe. We learned how to sit, breathe, and what to do if something comes into your mind while meditating. The class was half an hour and we sat and meditated for 15 minutes. It was very calming, even though my lower legs and feet fell asleep.

At 5:30, dinner was brought to my room by one of the monks. I played some Zen Music for Balance and Relaxation

from my iPhone and had a lovely, relaxing repast by myself. It was a multiple “course” meal with many dishes, which included: steamed rice, Japanese pickled radish, a miso-like soup, vegetable tempura, hijiki seaweed, tofu with shoyu and a dab of wasabi (the best and creamiest tofu I’ve ever had in my life, mind you), wakame seaweed with cucumber, freeze-dried tofu, snow peas, pumpkin, daikon, konnyaku (a jelly-like cube made from the starch of devil’s tongue), goma-dofu (ground white sesame seeds and kuzu flour dissolved in water and served cold in tofu-like cakes), a plate of soba noodles in broth, half an orange, and water and hot tea. This may sound like a lot of food, but each dish was quite small. It was actually the perfect amount of food for me – not too much, not too little. I was pleasantly satiated after the meal. 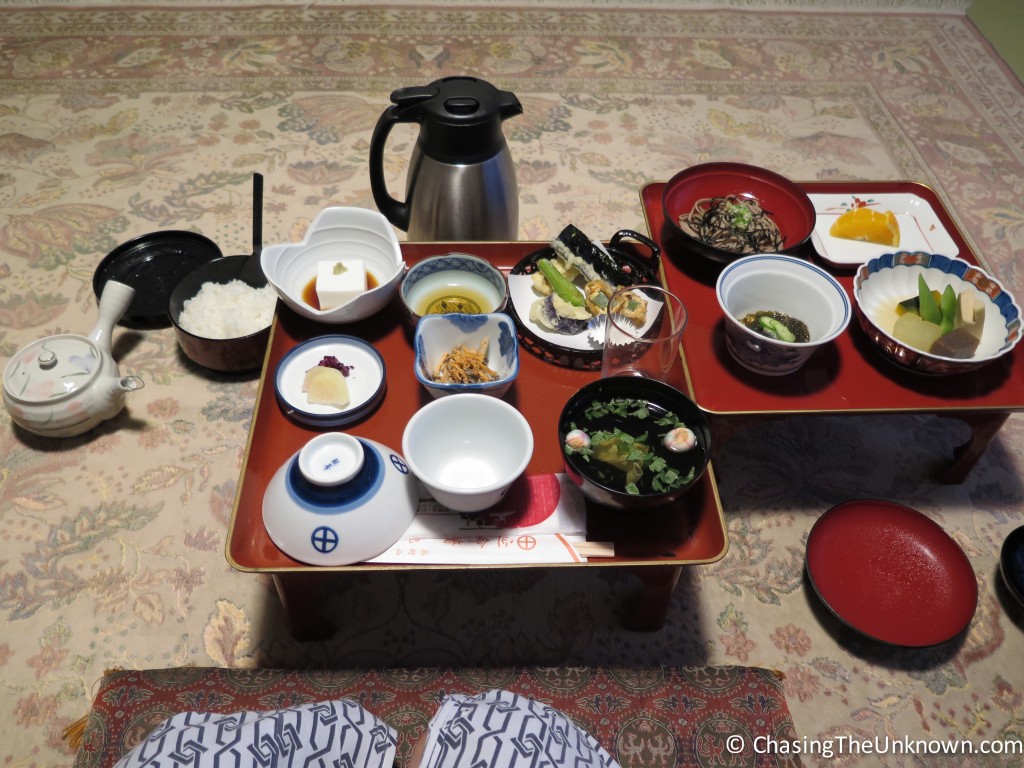 After dinner, the monks came and took away my trays and dishes and made up my bed, which was typical Japanese style (thin mattress on the floor). I had no complaints, as I was used to this type of sleeping arrangement (and, it turns out, I sleep very well this way). I then did a 10 minute yoga routine I found on YouTube, because this seemed like the perfect environment to do so. I had some green tea and the wagashi (small Japanese confectionery filled with adzuki red bean paste) that was in my room to finish off my evening.

At 6:30AM I attended the morning service, which consisted of a lot of chanting, cymbal clattering, drumming, and incense lighting. The guests were invited to participate by throwing some incense into an already burning bowl and bowing. It was really interesting to take this peek into the monks’ lives and see how they prayed each morning.

Next was the Gomakito (or Homa) fire ritual. The ritual is performed for the purpose of destroying negative energies, detrimental thoughts and desires, and for the making of secular requests and blessings. We were escorted to another building within the temple grounds and seated around a smallish platform with what looked like a shrine on it. A monk was seated at the shrine and began to perform the ritual, meticulously cleaning his instruments and setting up the wood pile, onto which prayers had been written. He then lit the fire and wow! It just kept growing and becoming more and more spectacular by the minute. 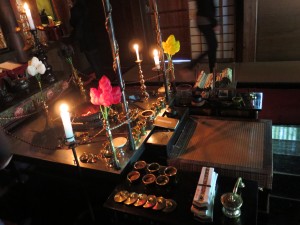 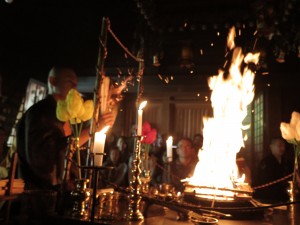 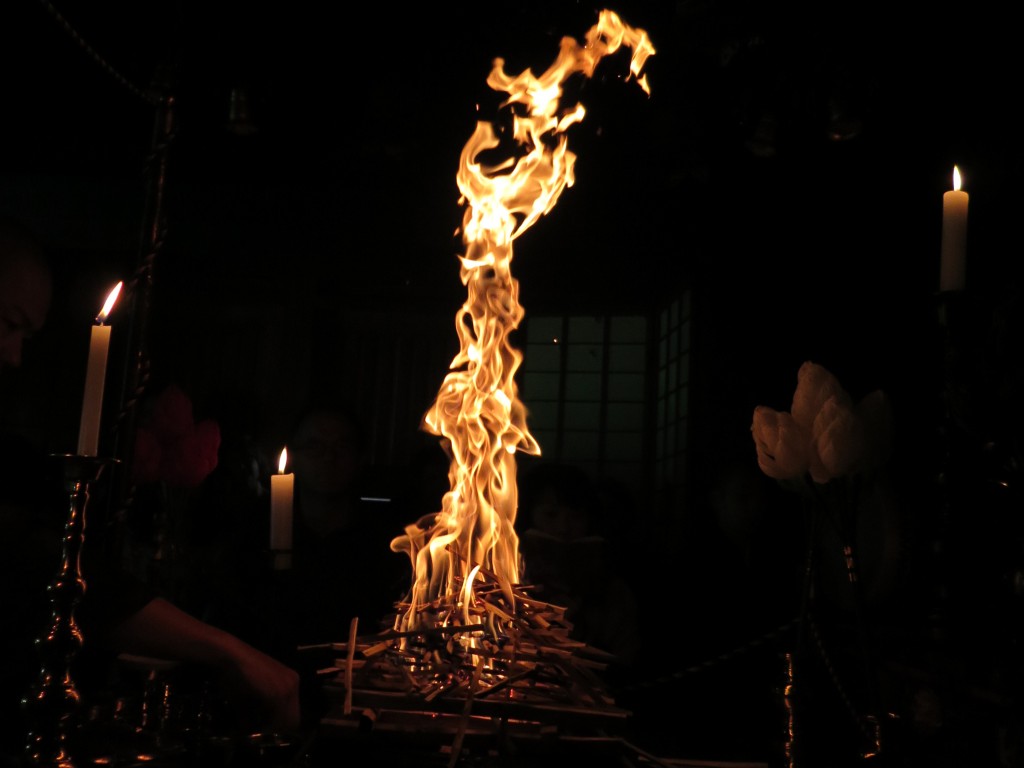 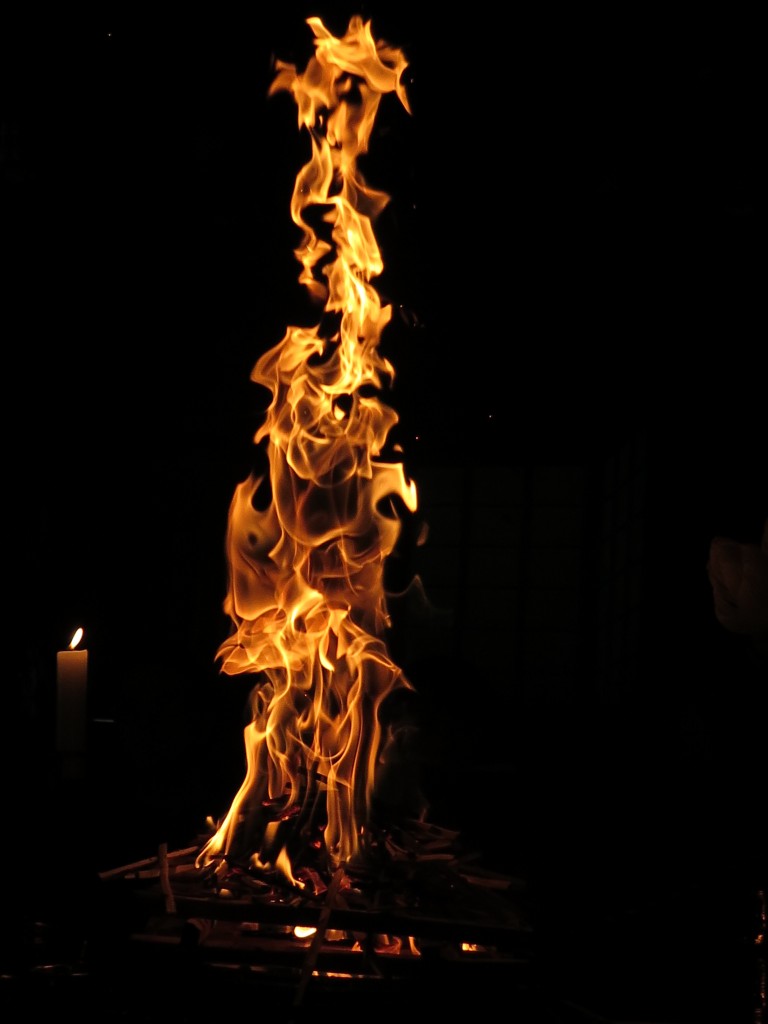 While staying at Ekoin, I had the opportunity to try hand copying Buddhist sutras, or Shakyo. It is a very common practice in Japan, the most popular being the Heart Sutra, containing only 14 lines, which is supposedly short, simple, and concise. “Copying a sutra is a form of meditation and has the ability to bring the practitioner peace of mind,” according to the instructions I was given. Before beginning, I read aloud the mantra of Kobo-Daishi, “Namu Daishi Henjyo Kongo.” While copying the sutra, I was supposed to repeat one wish in my mind and maintain a pure and selfless mind. The monk informed me that it takes most Japanese people about 1 hour to complete and it would probably take me much longer (he had so much faith in me). This practice is taken very seriously – instructions state “Don’t leave it half-done. It’s a Buddhist training, not a calligraphy lesson.” I’m guessing they’ve had problems with people in the past getting bored and quitting in the middle. Turns out, it took me 2.5 hours to complete (I blame the fact that my first pen dried out which slowed me down) and I thoroughly enjoyed the experience. It was all very relaxing and meditative and I hadn’t ever tried writing Chinese characters before (they were Chinese, not Japanese). 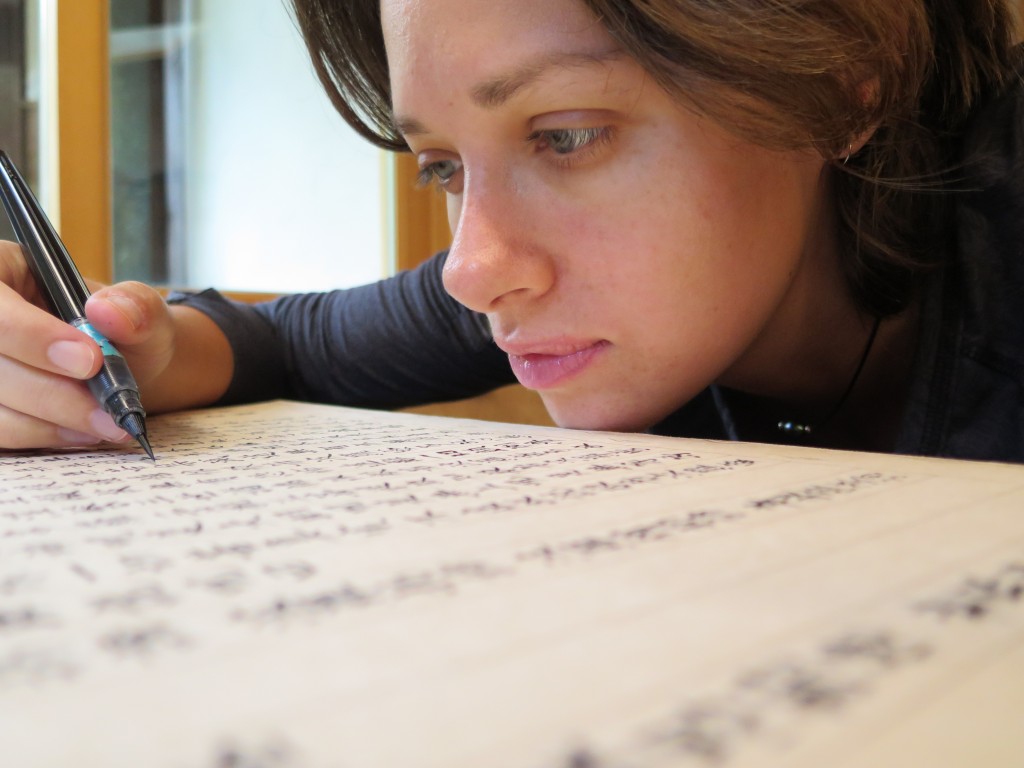 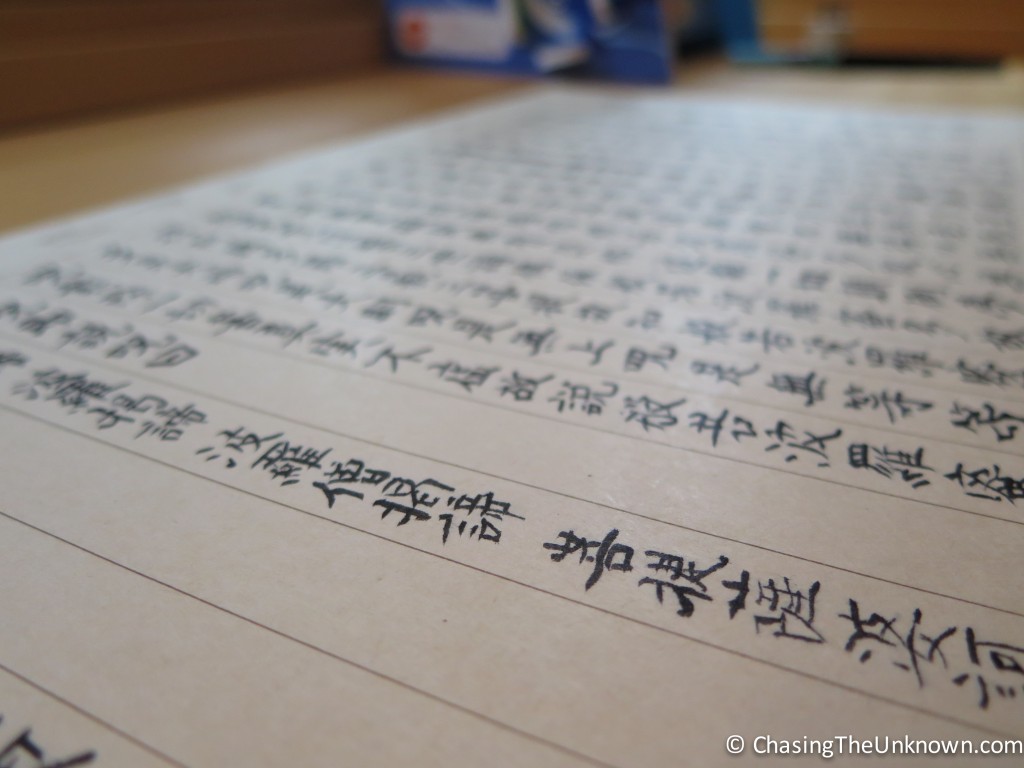 The second temple I stayed in was Fukochin-in. This one was a bit more expensive, but the food portions were much more generous (so much so that I couldn’t finish many of my meals). Fukochin-in is the only temple lodging in Koyasan to have an outdoor Onsen (Japanese public bath) and it was lovely. 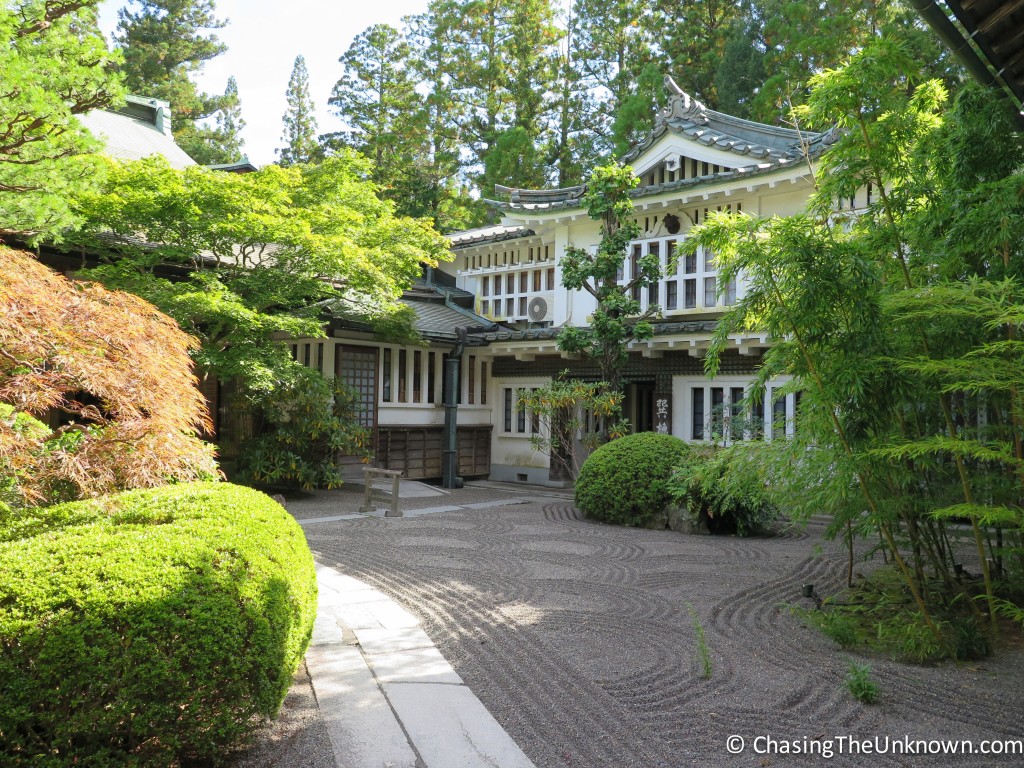 Koyasan town itself is very quaint and cute, with a few eateries and many souvenir shops. You can’t walk 10 feet without coming across a temple, most of which are beautiful. 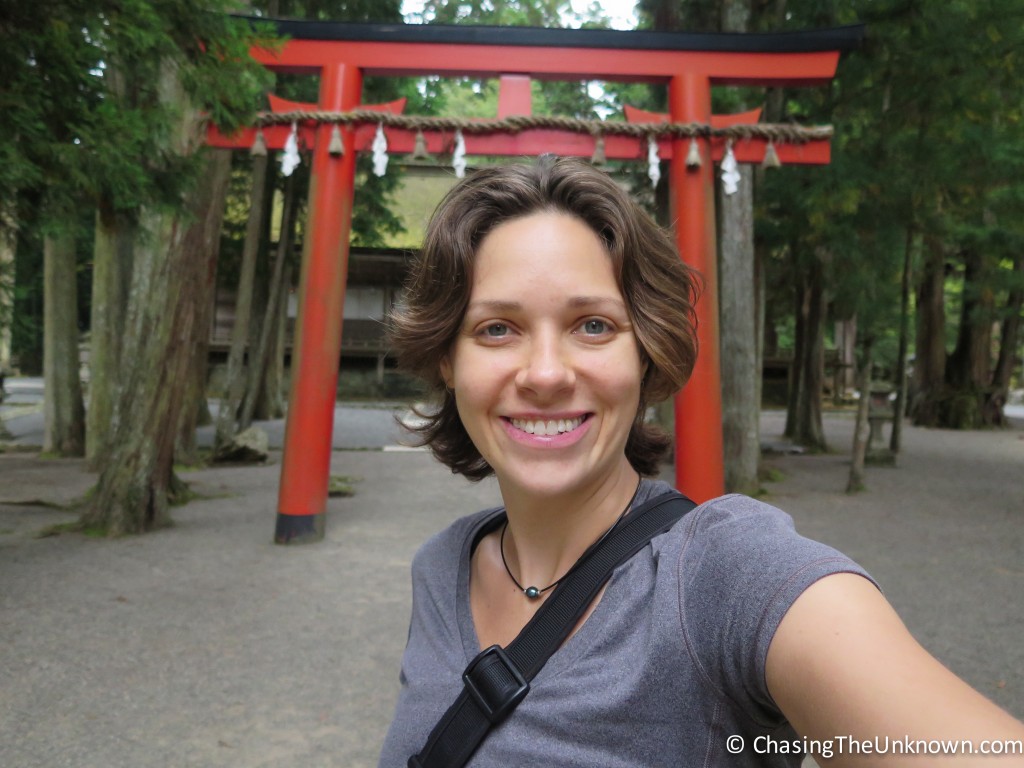 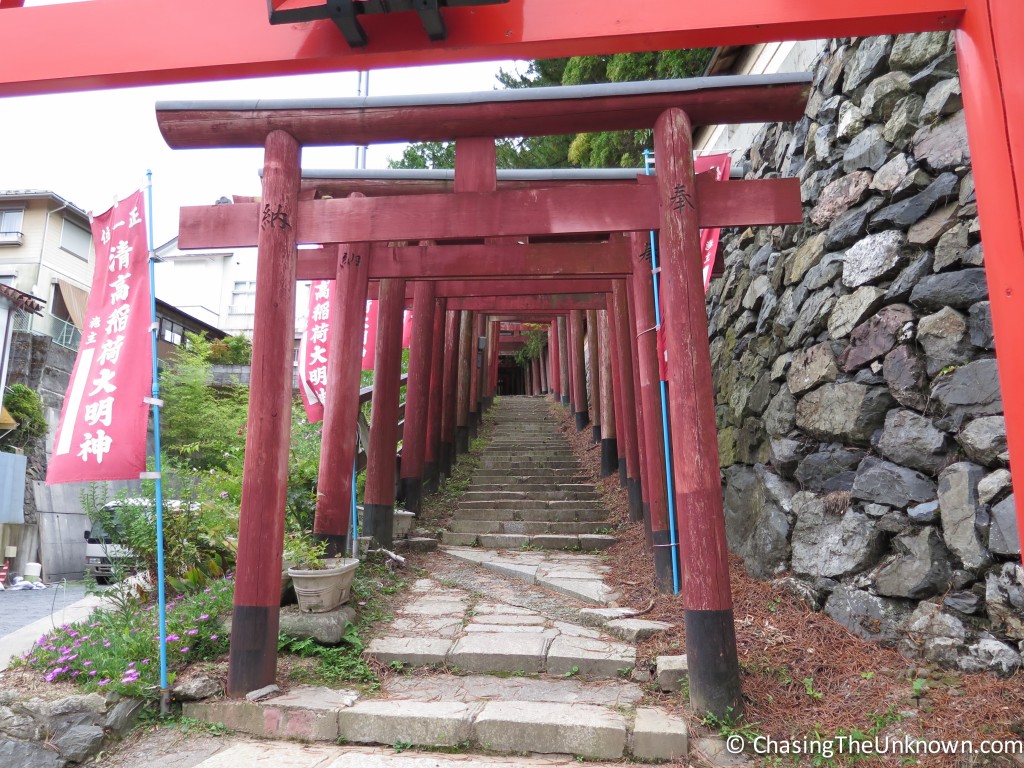 The largest cemetery in Japan, the Okuno-in Buddist Cemetery, is in Koyasan and it is 2km long with over 200,000 tombstones. According to Lonely Planet, “Any Buddhist worth their salt in Japan has had their remains, or just a lock or two of hair, interred here just to ensure pole position when Buddha of the Future (Miroku Buddha) comes to earth.” At the end of the 2km is the mausoleum of Kobo Daishi, who is believed to be undead and mediating behind the gates that must not be entered. Twice daily the monks bring him food to sustain him through his meditation. 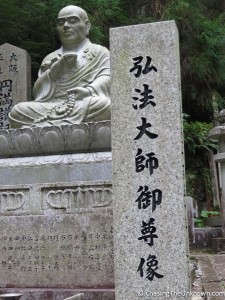 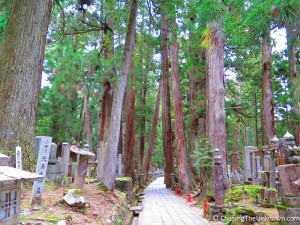 The experience of visiting Koyasan and staying in the Shukubo was one of my favorites in Japan. I felt so good being a vegetarian for those 5 days that I’ve been continuing with it (mostly – I still love lamb) ever since. I have been keeping up with the meditation and this experience encouraged me to do a week-long meditation retreat in Phuket, Thailand to deepen my practice.

7 thoughts on “Monks, Meditation and Monasteries: 5 Days in Koyasan”