I’m following a monk through bushes in the middle of nowhere, Myanmar. Seriously? This is my life? I grinned for the zillionth time in Mrauk-U, a place hard to reach in conflict-torn western Rakhine state as the monk led me uphill, branches scratching my already torn-up limbs as they slapped and scraped against me. When the “trail” cleared and we reached the top, he turned and smiled. “Nine stupas. Monastery. Temple.” He pointed to each grouping while I fumbled with my camera and tried to soak it all in. Before I could ask the name of anything we saw or get a good photo, he took off again, ambling along the ridge. 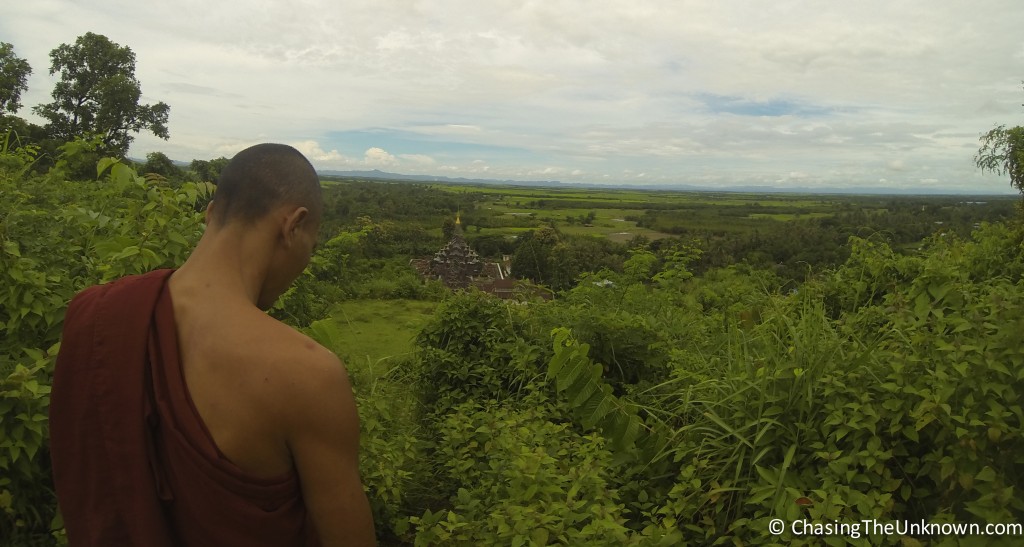 The monk had found me, the only foreigner in this little visited part of Mrauk-U, trying to find my way into the small temple where he resides. He showed me in, pointed out the various carvings, and said a few things in a language that sounded like a combination of the local Rakhine dialect, Burmese, and English. When I’d had my fill of ogling old stones below a Buddha statute and we walked outside, he pointed up the hill behind the temple with a smile on his face, “go?” he asked. I nodded, smiled, and off we went.

The trip out to Mrauk-U isn’t easy, requiring either a three-day bus ride from Bagan or a flight to Sittwe followed by a ferry ride. In high season, boatmen apparently meet the daily flights in Sittwe to offer private trips but in August, not many tourists come through. My only option arriving by air was to spend a night in Sittwe and get the government-operated ferry the following morning. There isn’t much to see or do in Sittwe: it’s filled with NGO workers and a strong military presence keeping Burmese and foreigners out of the Muslim quarter in the heart of town. I don’t want to drag this post down but I would be remiss if I didn’t mention that in 2012, Sittwe was the epicenter of a violent clash between Buddhists and Muslims, still a serious issue. I read as much as I could before deciding to go and I recommend anyone considering a trip to this area take some time to understand the risks and ethical issues of visiting Rakhine (also known as Arakan) State. At the time of my visit, the risk of violence appeared low and although my heart breaks for the displaced Rohingya Muslims, I decided to make the journey. I’m still grappling with choices I made in Myanmar – something I’ll write about soon – but as hard as it was, the trip to Mrauk-U was worth it.

I was the only foreigner on the boat to Mrauk-U and I didn’t see any until more than 24 hours after my arrival. At that point, three Europeans arrived on the three-day bus from Bagan. By the time I returned to Sittwe four days later, I’d only seen a total of six other tourists. Given the beauty of Mrauk-U’s ancient temples, this is truly incredible. I explored at my own pace, stopping to study carvings as long as I wished, retracing my steps to look at something more than once, sitting down to annotate my map or make notes in my journal, hopping off my bicycle in the middle of mostly empty roads to take photos or bask in the sun-warmed countryside. With few signs and maps that don’t match (Lonely Planet’s map is terrible but the one provided by my guesthouse is equally flawed, albeit in different ways) plus the number of times I took off down an unmarked path or up a flight of stairs in search of something interesting to see, I have no idea how many temples I actually saw. Instead of covering all that I visited, here are some of my favorites, in no particular order:

Kothaung (Koetaung) Paya built around 1553 by King Mintaikkha, this may be the largest temple in Mrauk-U and when I visited, I had it entirely to myself.

A significant reconstruction occurred in the 1990s and as I couldn’t get a guide in the area to respond to my inquiries (and no one was at the Regional Guides Society “office” in town) I explored independently so have no clue what’s original. Regardless, there are tons of carvings, ogres at the base of the stairs, and 90,000 Buddha images to check out.

Htuk Kant Thein (Dukkainthein) Paya built, I believe, in the 1570s by King Minphalaung, this might be my favorite temple in Mrauk-U. The approach is uninspiring, to say the least. But protected from the elements, the carvings inside that line the spiral corridors are stunning. I spent ages in here running down the batteries in my flashlight. 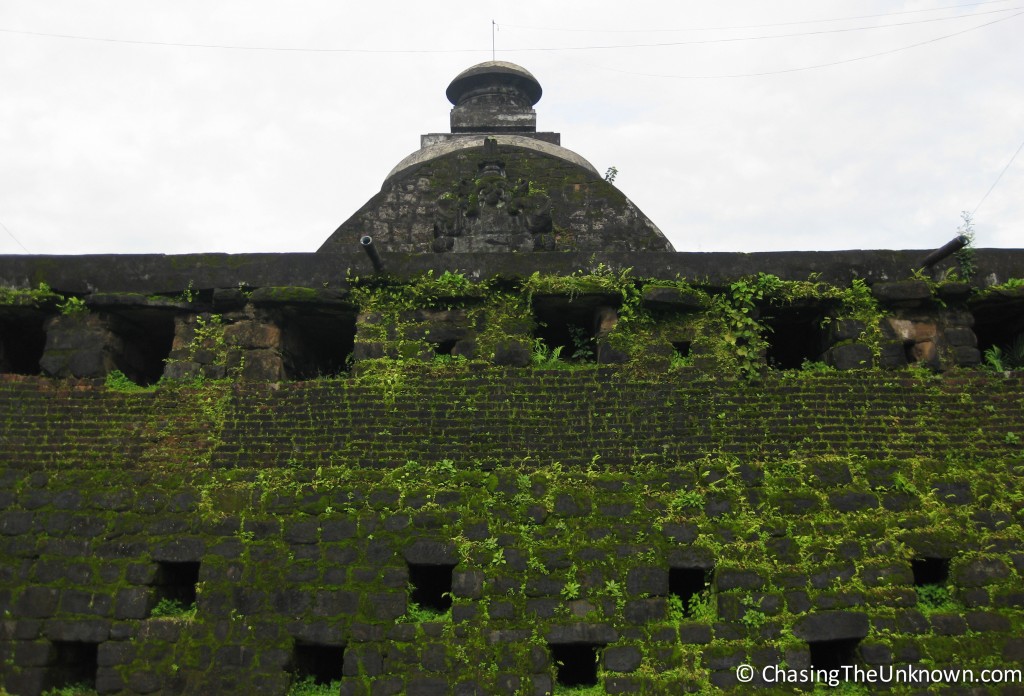 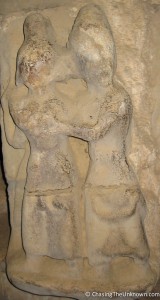 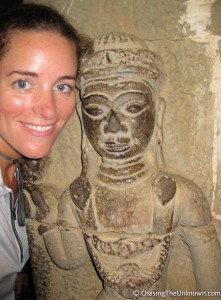 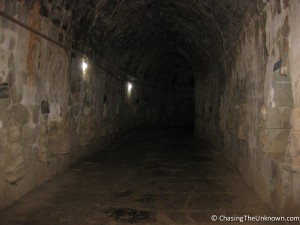 Htuk Kant Thein is located in a more populated area than many of the temples. Locals outside made sure I removed my shoes before even climbing the stairs to enter. Once past them, I was alone, shuffling slowly along barefoot.

Peisi Daung Paya is one that I couldn’t find when first I went looking for it and I’ve no idea when it was built or by whom. It’s at the top of a hill but there isn’t much of a path through the foliage so one really has to look up at just the right spot from the road to see it.

Ok, the temple itself isn’t all that exciting but finding it was. There’s a map inside the Archaeological Museum showing all the temples, monasteries, and pagodas in Mrauk-U but photographs aren’t permitted in the museum so I marked it down as best I could on my map. I’d read that it was up a hill near Ratanabon Paya and fortunately, there was only one obvious choice to walk up. But to reach it in August, I had to ditch my bike and slog through ankle-deep mud. There wasn’t much of a path but by this point, I was accustomed to beating my way through bushes hoping I was heading the right way.

Shwetaung Paya was built in the 1550s by King Minbin, the primary builder of Mrauk-U’s temples. It’s the highest and thus good for sunrise or sunset. With the trails overgrown, the family who run Prince Hotel (where I stayed and highly recommend) insisted that one member of their family guide me up the hill just after sunrise. Like my climb with the monk, this one left me bruised and scraped as thorns and rocks jumped into my path time and again. In the end, I appreciated the guidance and having waited for a bit of natural light before starting up. 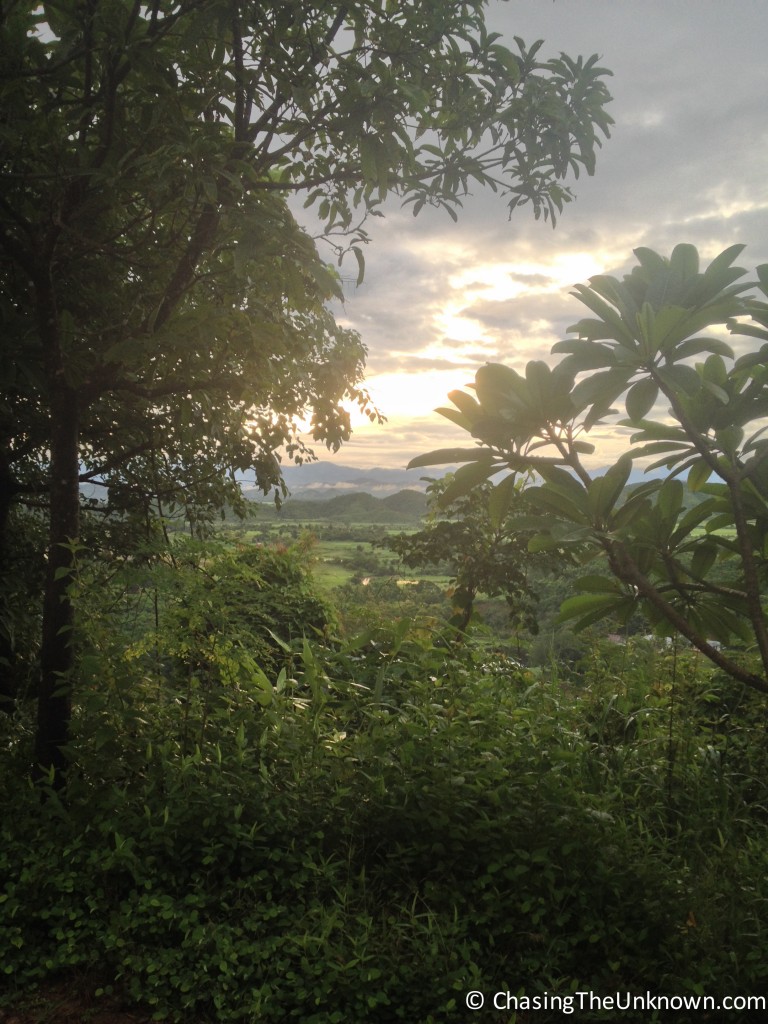 I visited plenty of other temples and got lost more than once trying to find some of the lesser-visited ones. The monk who led me uphill drew me a map, hoping to clarify the one I had but with stretches of road closed due to mud, I still couldn’t find every temple I wanted to see.

My final full day in Mrauk-U I paid a visit to Chin villages a few hours north of Mrauk-U up the Leymyo (Lemro) River. Like the villages surrounding Kyaing Tong, the residents don’t have much but here, I didn’t get the same feeling of community and tradition I saw around Kyaing Tong. There were no overt expressions of tribal customs other than the faces of a few widows. And while these tattooed women are willing to be photographed and seemed happy enough to chat with us, they admit they don’t like the tattoos and are relieved their daughters and granddaughters were spared the needle. 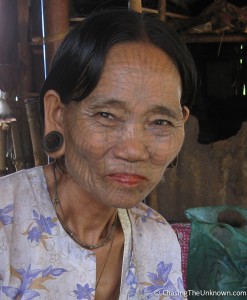 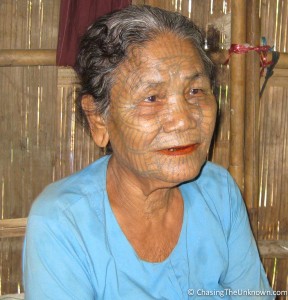 These women were tattooed during childhood, a tradition started to prevent pretty girls from being taken away from their families.

Although I felt awkward photographing the women above and I’m not proud of where some of my money went (more on that in a subsequent post), my time in Mrauk-U (pronounced Meow-oo) was one of the highlights of my Myanmar experience. Children waved and called “bye” as I walked or bicycled around; everyone I stopped to ask for directions smiled and listened patiently to my stuttering Burmese and mangled pronunciations then helped as we mimed our way to an understanding; and I often went most of the day without seeing another tourist. There were challenges, of course. Most roads are not paved and the bicycles available for hire are a far cry from mountain bikes. Electricity is routinely shut off for long stretches of time. Dining options are limited and even finding a tea shop in which to wait out a rainstorm for a few minutes can prove impossible. But all of that coupled with the extra effort, cost, and time of getting to and from Mrauk-U made it that much more rewarding. I don’t know how much it will change in the coming years as it will always be inconvenient to the rest of the tourist trail but if I have a chance, I’ll return someday. Maybe during dry season so I can actually find a few more temples.

If anyone reading this has been and can shed light on how it’s changed or what it’s like during high season, I’d love to hear from you in the comments.

2 thoughts on “Mrauk-U: Temples Without Tourists”