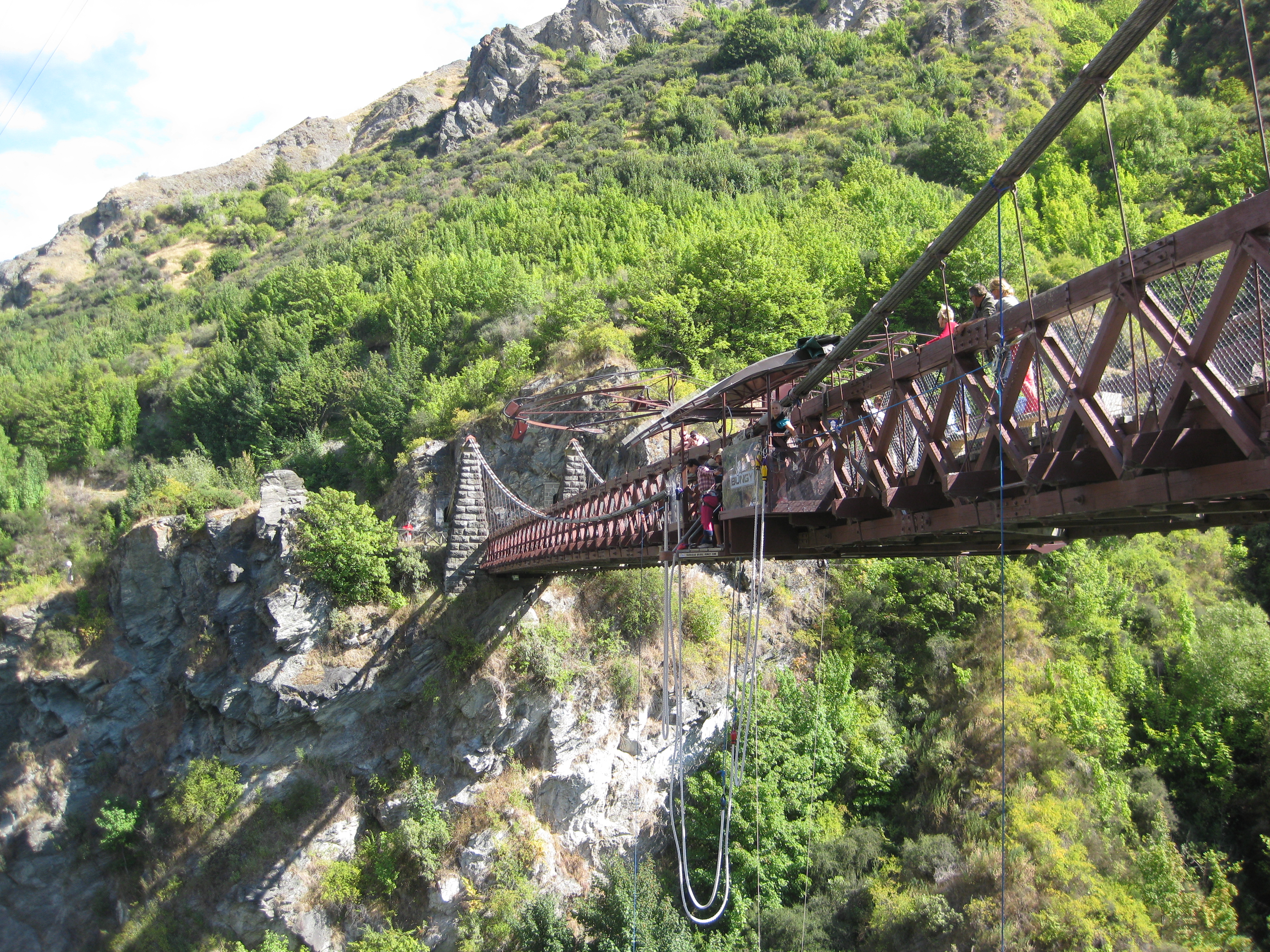 Queenstown, New Zealand is dubbed the adventure capital of the world. I knew that I HAD to do some sort of extreme activity here, and I had my eye on bungy jumping. The summer after I graduated college, my friends Abby, Neil, and I went tandem skydiving in Ovid, NY (near Ithaca). I had a little fear of heights and this seemed a way to conquer it. Skydiving turned out to be one of the best experiences of my life. The freefall was the most enjoyable part. It almost felt like flying. I was falling, nothing holding me back, and all the while I knew I was safe because I had a parachute. I was a bit nervous, which helped feed the adrenaline rush I felt while falling. Here in Queenstown, I wanted to have a similar experience and bungy and skydiving seem to be linked, so I figured, “why not try bungy in the place that it was born?”

The launch of the Kawarau Bridge Bungy site in November 1988 by the AJ Hackett Company has been hailed as the birth of adventure tourism in New Zealand, and was integral in putting New Zealand on the world adventure tourism map. There are several bungy options in Queenstown: the Kawarau Bridge (original at 43 m high), The Ledge (freestyle bungy where you are hooked in by your midsection and have several jump style options – 47 m) and the Nevis Bungy (you jump from a high wire cable car and it’s the highest at 143 m). I decided on the Kawarau, as it is the traditional, original bungy, I wasn’t sure whether I’d like bungy jumping, and it was the least expensive (trying to stay on budget, or at least close!).

As we approached the site in our van, we could see the bridge and all the bungy hook-ups. I got very excited. When I checked in, I had to sign the standard “if you die or get mangled, it’s not our fault” release. They weighed me and wrote my weight in kilograms on my left hand. I walked out to the bridge and Marbree hung out in one of the viewing areas. I climbed into the jump platform area and they wrapped a navy towel around my shins and ankles, as well as several straps. I thought, “a towel and some straps are going to be all that separates me from life and death? Hmm… OK!” The guy strapping me in asked if I wanted to hit the water. I said “maybe only with my arms.” He said I’d better jump off far and do a good dive, otherwise my head is going in. “I’ll try,” I said, but figured it wouldn’t be the worst thing in the world if I got dunked.

Here’s the video I took of the entire thing from the perspective of the GoPro Hero 3 Black strapped to my right wrist:

Here is the “official” video of my jump, as recorded by the AJ Hackett Company:

Bungy jumping was one of the greatest experiences of my life. Calling it exhilarating is an understatement. The freefall, the bouncing, and the hanging were all just a wonderful rush of enjoyment. At no point was I in pain or uncomfortable (or even nervous). I’m definitely going to bungy jump again, and next time, it’ll be from higher up and maybe I’ll do some flips.

One thought on “Queenstown Bungy Jumping”