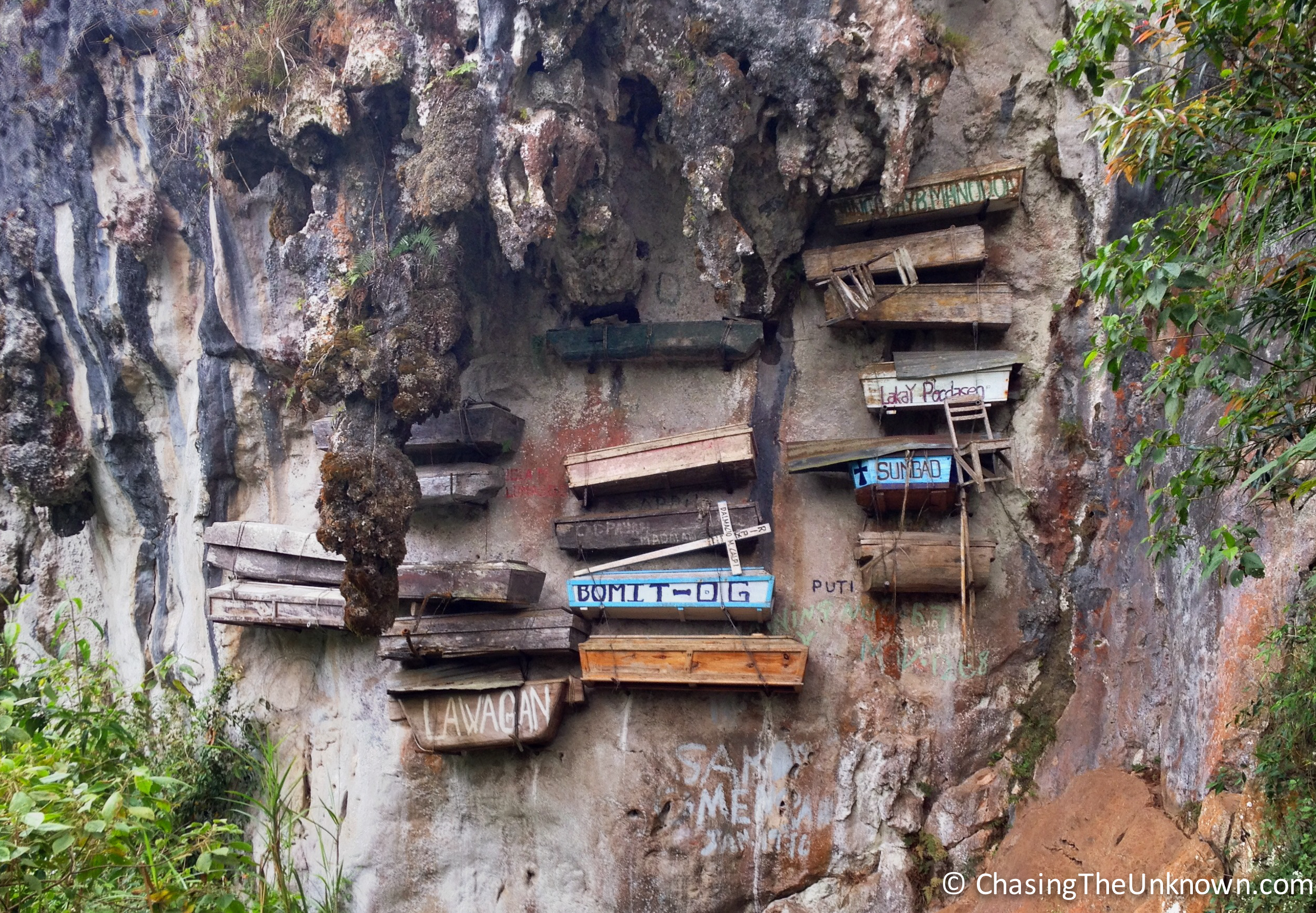 When I decided to visit the Philippines, I planned to stay one month and I made a list of places I wanted to dive and a few, like El Nido, that I wanted to see and maybe dive if people on the ground vouched for their awesomeness. I did no research into anything other than diving, trusting that people would tell me about other places I should visit. I stayed nearly three months and had more suggestions than I could handle. As my time in the country came to a close, I finally heeded the advice to go north of Manila into the Cordillera.

The 2,000+ year-old rice terraces of Banaue and Batad are famously beautiful but the end of February is the wrong time of year to see them as rice is planted throughout that month. Some fields are nothing but dirt while others are home to mere seedlings. So I chose to focus on Sagada, promising myself I’d get out to see some of the equally old – and stunning – rice terraces nearby. But I could also explore caves, see coffins mounted to cliffs, and trek to a waterfall. Rumored to be a rare haven for vegetarians and with plenty of cheap accommodation, Sagada made sense for me. In no particular order, I’ve summed up four highlights below.

About a 20 minute walk south of town is Lumiang Burial Cave where a collection of coffins, the most recent added in 1986, sit at the entrance. I’d joined two Filipina women on the Cave Connection. This “tour” is available from the Sagada Tourist Information Center for 800PHP for two people plus 400PHP ($9) for each additional. A private tour costs 800PHP. The walk starts in Lumiang and ends in Sumaging Big Cave. In between, there are caverns of all sizes including one that stretches 180m (197 yards) high, pools deep enough for swimming and one that must be crossed in thigh-high water, ancient stalagmites, slippery white limestone, and countless passages that require blind faith in one’s guide. Large people cannot fit through some of the crevices and are required to turn back. Light is provided by the guide’s lantern and as I was bringing up the rear of our group, I was happy to have my headlamp.

The experience was incredible and one I won’t soon forget. I finished dirty and wet with sore legs but unscathed and happy.

The path to Bomod-Ok waterfall is a 20PHP (45¢) jeepney ride from Sagada. I’d teamed up with two other travellers and we split the mandatory 500PHP ($11.30) fee for a local guide. The path is a steep 1.9km each direction and cuts through rice terraces on the way. There’s no need for a guide but also no option to go without one. At least some of the funds, we were told, pay for the construction and upkeep of stairs and railings along the path. An additional 10PHP per person is charged by a village through which one passes. The falls themselves are underwhelming at this time of year but the walk made it all worth it. 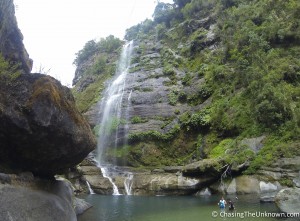 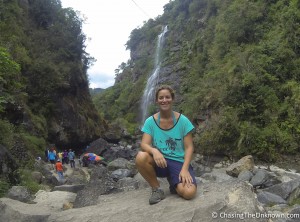 Sagada’s claims to fame are the caves and the so-called hanging coffins. Those in Echo Valley are the most photographed and getting to them requires picking your way along unmarked paths up and down hills. Some kind person put excellent walking directions here which I followed without problem – and then I wound up helping others find their way. The Igorot people of Sagada have been building their own coffins before death for generations. Tradition requires the building occur late in life and if one becomes incapable of building it, family is expected to assist. Once a person dies, his coffin is then placed with those belonging to family members and ancestors. When I asked residents about the reason the coffins are mounted on cliffs and hidden in caves, I was told only that it’s tradition and may be related to Animist beliefs. I received differing answers to my question whether people still follow this tradition. A Christian burial ground, filled with above-ground coffins built by commercial enterprises, is not far from Echo Valley so it’s evident that not everyone holds to tradition. With so many caves and cliffs in the area, I expect there are countless hanging coffins in places tourists and outsiders would never think to look. 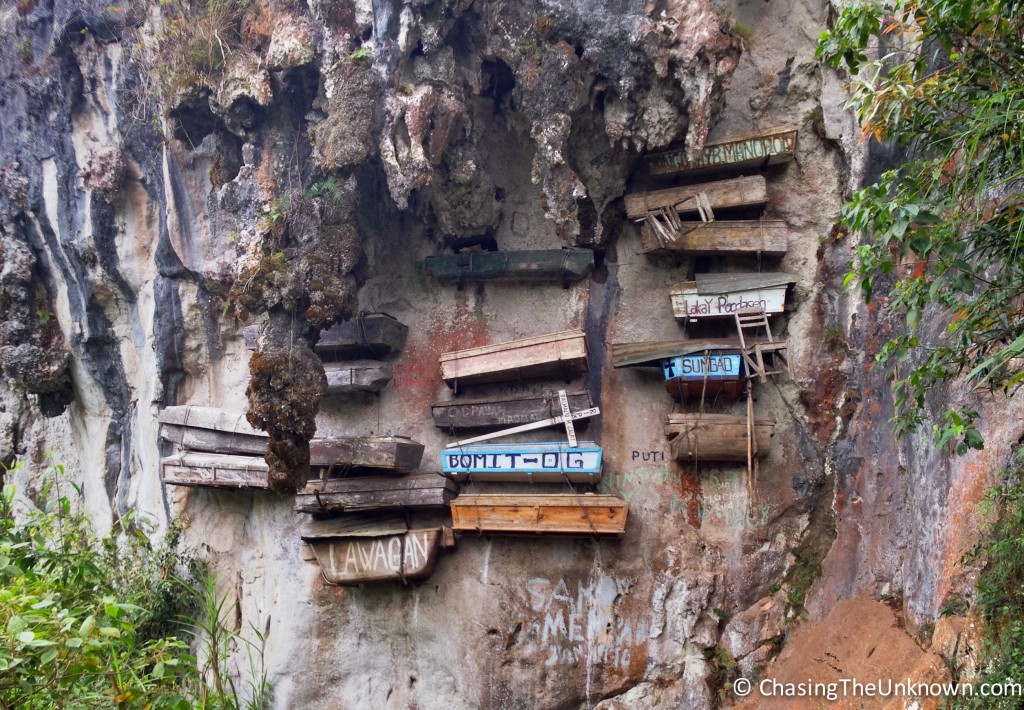 I’ve previously mentioned that it’s hard to find decent vegetarian food in the Philippines but in Sagada, I was spoiled for choice. The region is excellent for growing all sorts of vegetables so dishes are loaded with local produce. Many restaurants make their own yogurt and local honey is downright delicious. There are coffee and pie shops where it’s easy to sit and people watch with a cup of tea (I recommend the tarragon-mint tea at Sagada Brew) or a beer. The town has a self-imposed curfew on the sale of alcohol and since I was on my own most of the time, I hardly drank. But one evening I gathered with others in the common area of my guesthouse with a deck of cards and a few beers, chatting well into the night.

One can reach Sagada multiple ways. I took a 460PHP ($10.50) bus from Manila to Baguio and spent a night there to break up the journey. The mountain roads are steep and full of hairpin turns and the ride to Baguio takes around 8 hours. I hopped on an 8:30am bus from Baguio to Sagada for 220PHP ($5) and arrived around lunchtime. From Sagada, there are jeepneys to Bontoc every 30 minutes at a cost of 45PHP (about $1).

From Bontoc, I went to Vigan by way of four vans: Bontoc-Abatan for 50PHP ($1.15), Abatan-Cervantes for 70 PHP ($1.60), Cervantes-Tagudin for 150PHP ($3.40), and finally Tagudin to Vigan for 120PHP ($2.75). By telling each driver where I was ultimately headed, the trip was easy and passed through some lovely scenery. Many people go from Sagada to Banaue by transferring in Bontoc and from what I see, it’s an easy transfer.

Accommodation options are plentiful but if arriving on a Friday or Saturday, it’s wise to book ahead as the town fills up. I paid 250 PHP ($5.65) a night at Traveller’s Inn for a private room with shared bathroom. Hot water could be had on some nights but not all and WiFi only worked in the evenings. From the road, it didn’t look like much but the woman who runs it is friendly and there’s a nice sitting area on the second floor (rooms are on the second and third floors, set back from the street). There are plenty of options around town in the 250-350PHP range and unless it’s a weekend or late at night, it’s easy enough to find something.

Bana’s Cafe makes excellent carrot pancakes (imagine carrot cake converted to a pancake then drizzle it with local honey instead of cream cheese) and Yogurt House serves a delicious eggplant pasta dish plus all kinds of other tasty options. I didn’t have a bad meal anywhere in town and over the course of my time there, I ate nearly everywhere.

2 thoughts on “Caves, coffins, and more in Sagada”