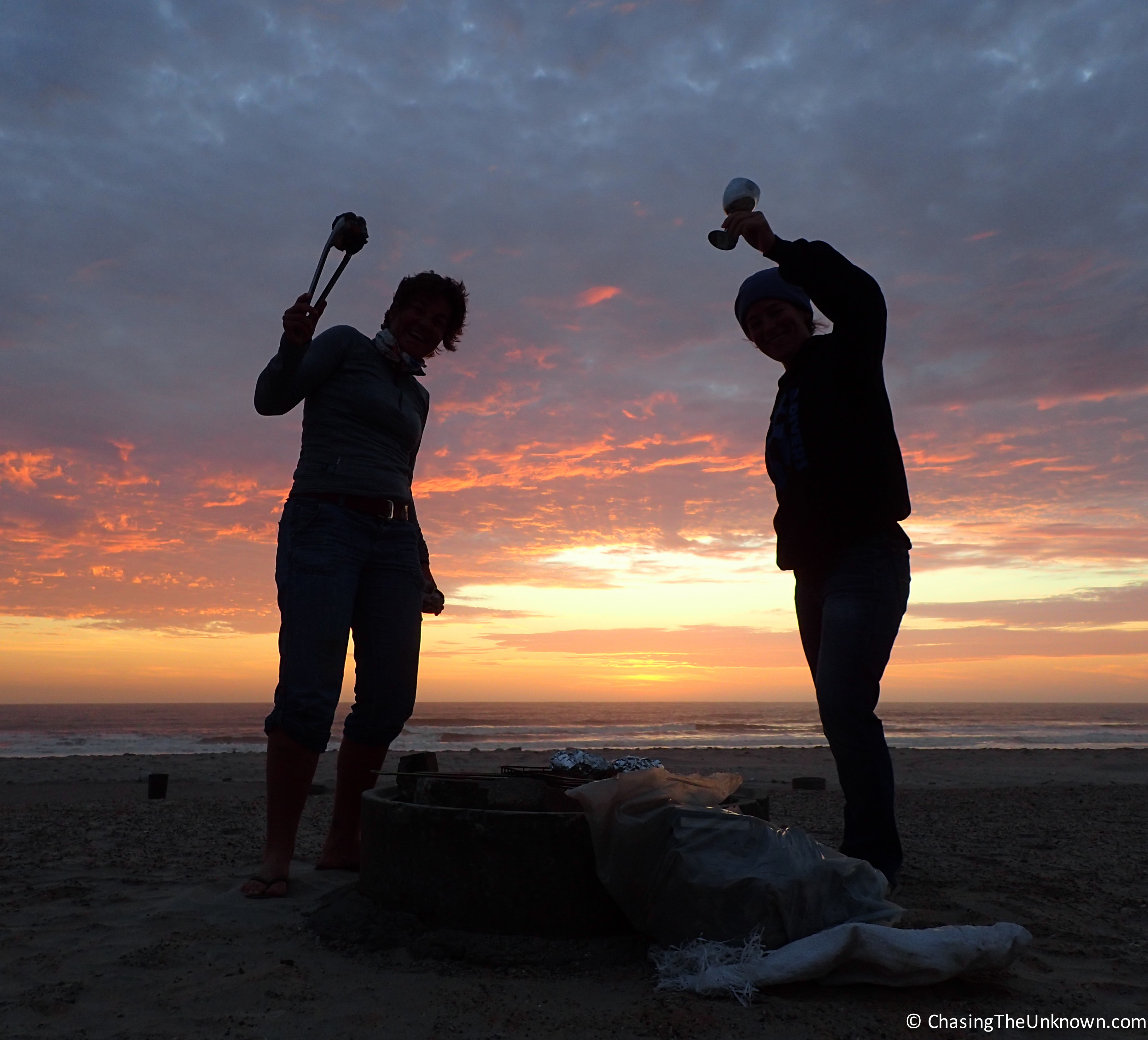 For the most part, I believe that travel is and can be affordable and accessible. There’s usually a way to visit even dream destinations like Bora Bora on a budget. But there are a few places that can only be visited if you have a good chunk of money sitting around. Or a job that takes you there. One of those is the northern stretch of Namibia’s Skeleton Coast. Access is restricted to fly-in safari visitors and those safaris cost thousands of dollars per day. One operator breaks down the cost and is a bit more affordable. Assuming that you’re sharing a luxury safari tent, you’ll pay upwards of $500 per person each night including meals and activities. But you’ll also need charter flights to and from the camp. I suspect that four nights would be the minimum I’d want in the area. Way out of my budget. You may be wondering why I would want to visit the most remote part of an area known as the Skeleton Coast. Because I’ve been to the southern part. And even though I’ve spent time in more remote parts of the world, there’s something about the Skeleton Coast that feels unbelievably isolated.

The words barren, desolate, and treacherous are routinely used to describe the Skeleton Coast. As I flip back through my journal, harsh, dreary, and raw also appear more than once. My coldest night in Namibia was on the Skeleton Coast. When, after two nights, we woke to rain mixed with fog, we were eager to pack up and return to the scalding desert. Homes built along the coast are generally holiday homes for those keen to do a bit of angling. As it wasn’t a holiday season when we passed through, not a soul could be seen.

With few exceptions, campsites along the coast are rustic, to say the least. Drop toilets, cold showers, no electricity, water only available from storage tanks near the “office:” these are places you need to be self sufficient and prepared to go a bit feral. Although I admit to enjoying the hot shower I took at our next destination, I loved the ruggedness of camping on the beach, the frigid Atlantic crashing against the shore.

What’s with the name?
Dubbing it the Sands of Hell, the Coast of Skulls, and the Skeleton Coast, sailors centuries ago recounted that the northern Atlantic coast of Namibia is a deadly place. Underwater sandbanks shift constantly and many a ship met its demise along those banks. To quote the excellent Bradt Guide: “Even if the sailors survived the shipwreck, their problems had only just begun. The coast here is a barren line between an icy, pounding ocean and the Namib Desert.” Having walked that barren line along the ocean in search of the remains of the Winston – and then in search of our car – I understand how easily one could perish. There are few landmarks to provide a frame of reference. Especially when the fog rolls in, it would be all too easy to lose one’s bearing and get completely lost. The fog rolls in every morning. Sometimes it sticks around all day.

Along with the skeletons of shipwrecks, animal skulls and bones freckle the beach. The remains of seals and birds were easy to identify and unfortunately plentiful. There are, I’m told, whale bones along the northern stretch of coast; a result of the whaling industry that once existed nearby. Generally speaking, I didn’t stop to look too closely and this is the only photo I took of bones along the Skeleton Coast.

Between 80,000 and 100,000 Cape fur seals live at Cape Cross. The numbers fluctuate based on breeding season with bulls present from mid-October until sometime in December. According to information provided to visitors at Cape Cross, 90% of pups are born within a 34-day period in November-December. Bulls mate with cows in the week following the birth of a pup and once they’ve mated with all cows in their harem, they typically leave the colony. The sounds and smells of tens of thousands of seals are overwhelming. I’ll leave the smell to your imagination but share the following clip I recorded during our visit. Listen all the way to the end for a good roar.

It’s estimated that 25% of newborn pups are the victims of jackals and hyenas. I saw the tracks of both predators and the remains of many seal pups at Cape Cross and further up the coast. Some of those remains are likely the result of starvation, the pup and mother having become separated. Whatever killed them, it always saddened me to see a small seal carcass. 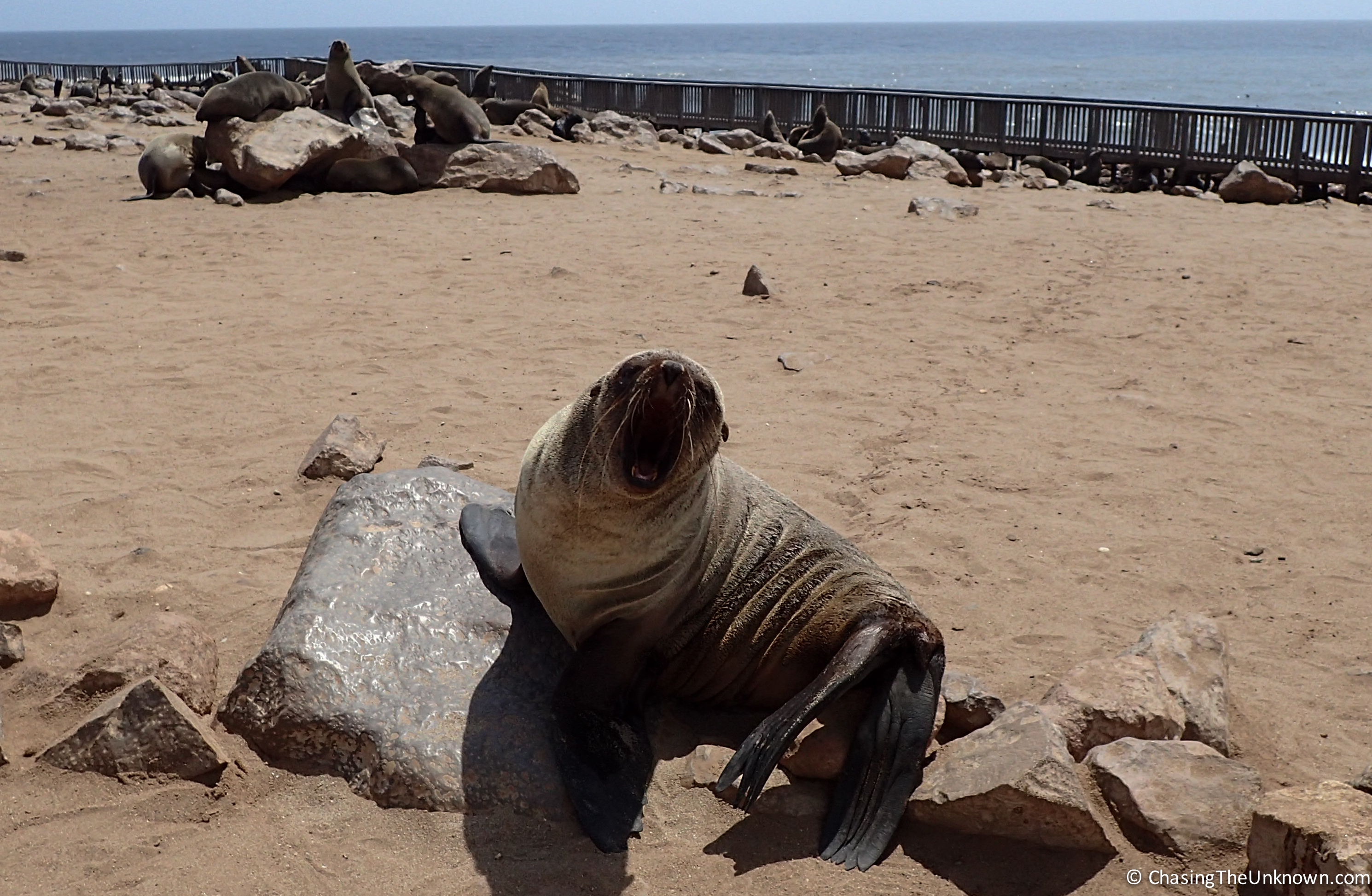 In addition to the seals, Cape Cross is home to a replica of the stone cross erected by the first European to land on the coast of Namibia in 1485. A few other historical markers have been added over the years but the seals are the best reason to visit. 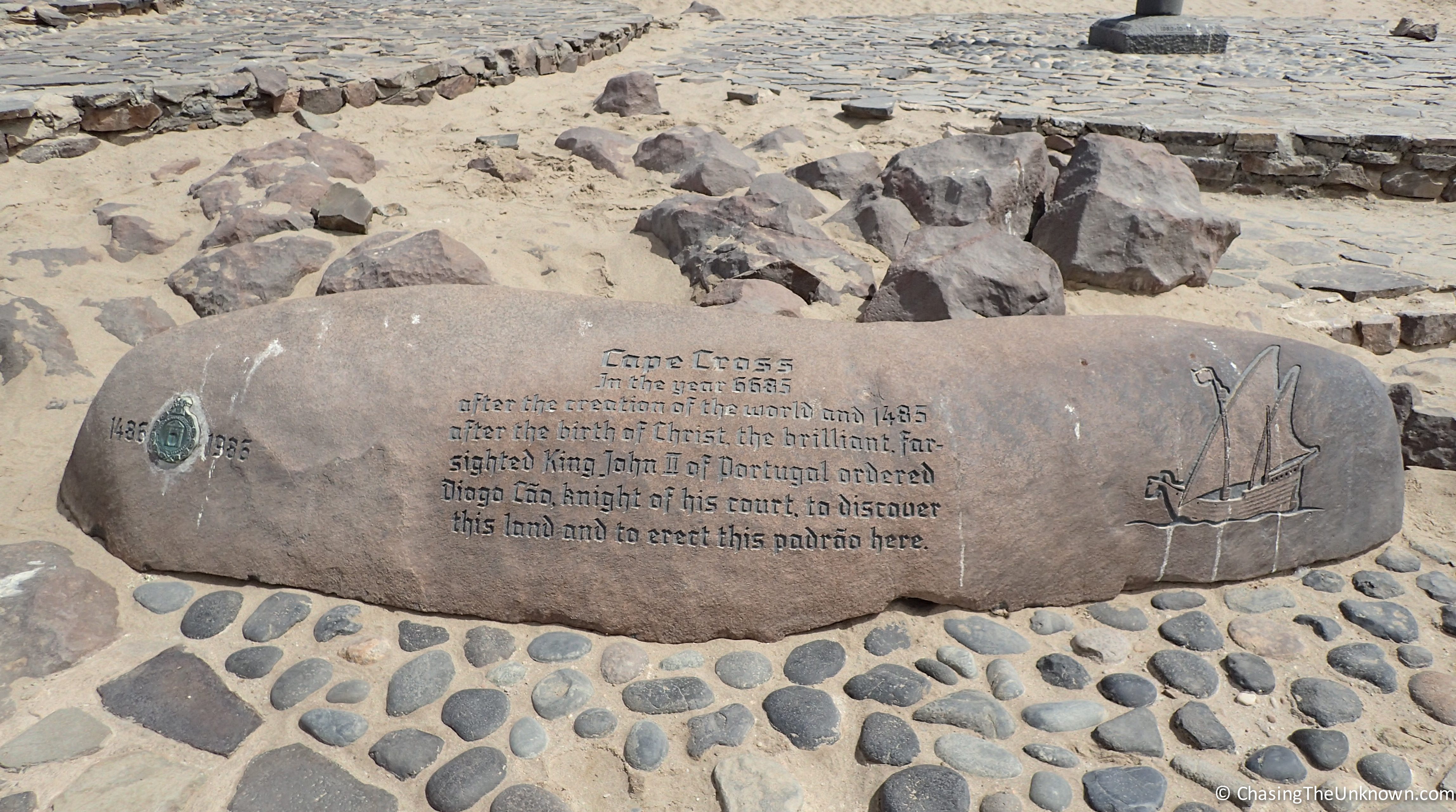 Now the part where I ramble about my time on the Skeleton Coast and other matters.

We didn’t actually make it to Skeleton Coast Park as we’d been told that the parts accessible by road aren’t much different from the stretch just south of the entrance that we explored. Still, we were able to look out over lichen fields, hunt down the remains of shipwrecks, taste the salt in a pan, look for gems and minerals (no, we didn’t find anything noteworthy), and soak up the energy of yet another empty part of Namibia. There were few other visitors along the coast north of Cape Cross, all of them men, most present for a fishing competition. Our presence surprised everyone we encountered. Each time we parked the car to explore on foot, someone stopped to check on us. Apparently two women going for a walk on the Skeleton Coast isn’t an everyday occurrence. We found this to be common in most of Namibia, people pulling over their cars to check on each other. We did it ourselves when we saw someone stopped roadside. Although we never needed help nor needed to provide any, it was reassuring to know that people look out for each other in this desolate land.

Namibia is a large country and most roads are unpaved. This makes for long travel days and as a result, nearly every place feels remote. We stayed in many places without electricity or running water. Places that offered just as little in the way of facilities as our Skeleton Coast campground. But somehow they felt less isolated. Maybe it was being on the ocean or the cold weather, maybe it was the complete lack of people, or the fact that the road was unlike others in the country (it’s called a salt road, made of compacted salt, gypsum, and gravel), perhaps it was the bones of animals and ships, or just my own state of mind. Whatever it was, the Skeleton Coast got under my skin. In the north, there are roaring dunes that rumble and growl when you slide down them. There are more lichen fields, wild animals, and even fewer people. Or so I’ve heard. It’s unlikely I’ll ever get up there and if I did, I’m not sure I’d want to stay in a luxury camp anyway. Part of what I loved about the coast was being subject to its harsh weather and rough conditions. It was dreary at times, beautiful at others. Hot in the midday sun and bitterly cold at night. Unlike sailors who washed ashore, I was a short drive from civilization. I had good wine and more than enough food and fresh water. But I understand why few tourists bother going north of Cape Cross. The landscape doesn’t change much. Other than shipwrecks and lichen, there isn’t much to see. If you aren’t interested in fishing, there isn’t much to do. But I’m so glad we spent two nights there, wandering through the sand by day and huddling around the fire at night. There’s something awesome about this stretch of coast, sandwiched between the ocean and the desert.

6 thoughts on “Seals and Shipwrecks on the Skeleton Coast”