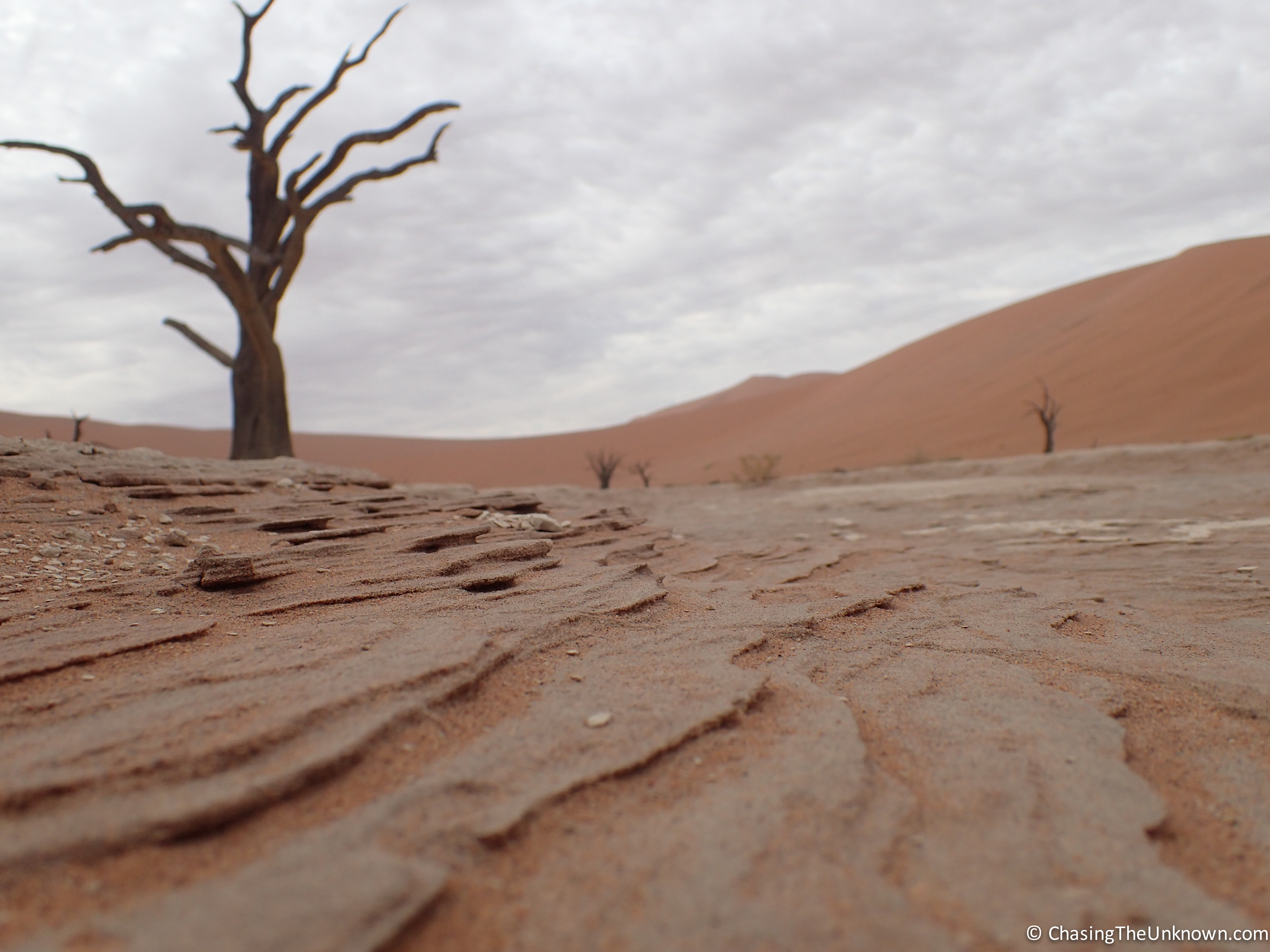 As a 19-year-old student I visited Pompeii and marveled at the lives people led during the Roman Empire. That mankind had existed with such complexity for so long, only to be destroyed by one quick blow from mother nature, overwhelmed me. When I sat alone and contemplated the history of people on this planet, tears came to my eyes. I couldn’t understand why I cried but I let myself feel without overthinking. Only a few months later, sitting above the ruins of a theatre at the Acropolis in Greece, I had the same reaction. Silent tears slid down my cheeks as I marveled the remains of home to some of Western civilization’s greatest playwrights. Again, I did not question my emotion but let the tears flow for a few minutes before moving on. What I felt those two days was a precursor to what washed over me in the harsh and ancient environment of Sossusvlei. 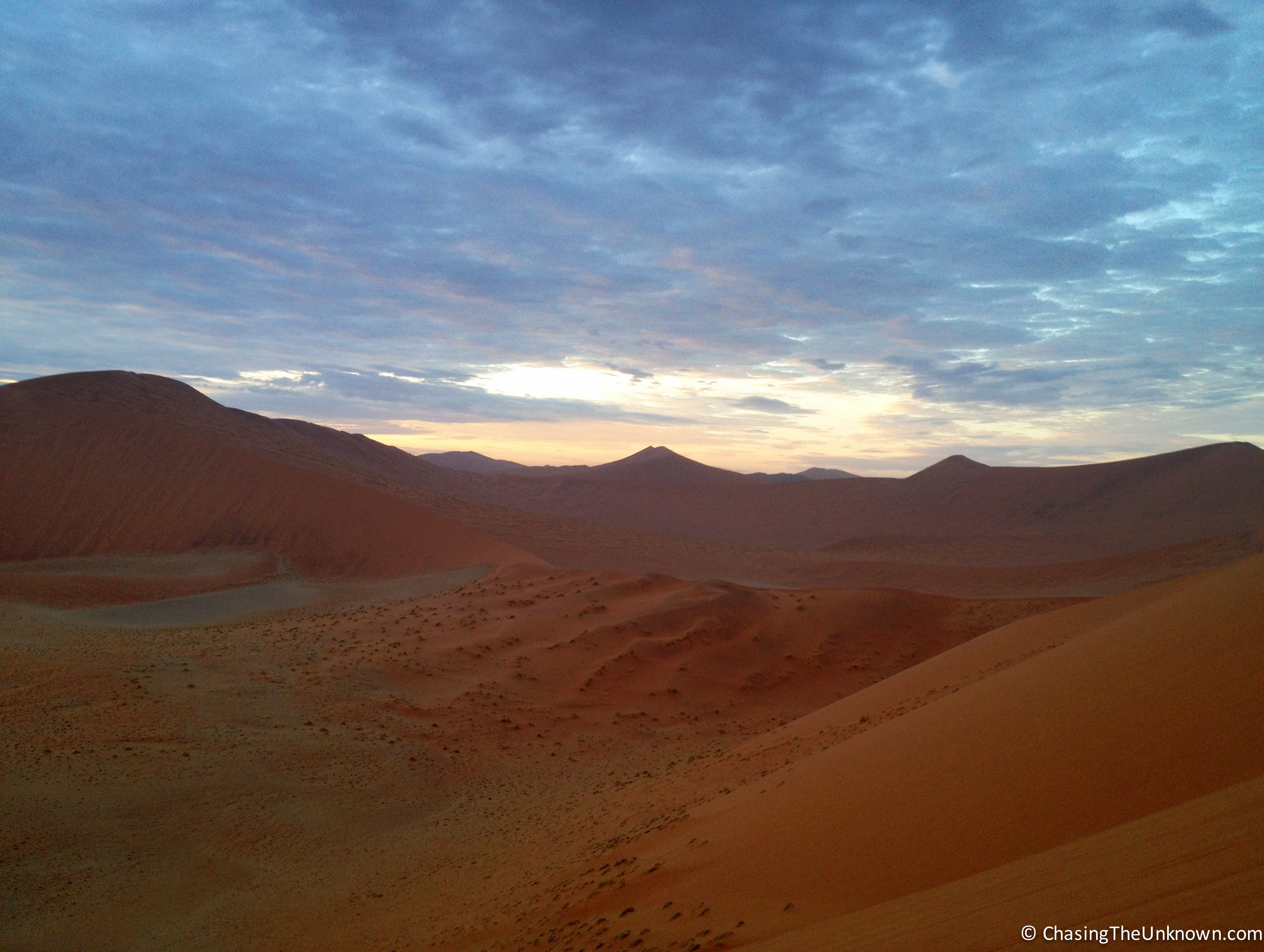 What is Sossusvlei?
First, a note about the word itself. I’ve read conflicting information about what makes up Sossusvlei but I think this website clears it up. To summarize, ‘sossus’ is a Nama word meaning dead-end. ‘Vlei’ is Afrikaans and means something like a marshy depression or shallow lake that fills during rainy season. The Tsauchab River, in the rare years when it flows, ends at Sossusvlei because the sand dunes meet and prevent the river from continuing. Most of the time the vlei is a salty pan of dried clay and mud. Many people, tour companies, guide books, etc. refer to the entire area from the Sesriem gate of the Namib-Naukluft National Park to the actual pan, including all the dunes and pans along the 65 km corridor, as Sossusvlei. Here, ‘Sossusvlei’ will refer to that entire area while ‘SossusVlei’ refers to the vlei itself.

The sand dunes of Sossusvlei in the Namib Desert are one of Namibia’s biggest tourist attractions. Having been there, I now understand the appeal. Possibly the oldest in the world (the Atacama could be older), the Namib Desert stretches along the Atlantic Coast of Namibia, south into South Africa, and north into Angola. It’s nearly 81,000 square km (approximately 31,000 square miles) and includes sand seas, gravel plains, river valleys and pans, as well as inselbergs: isolated mountains jutting up from the gravel plains (from the German “island-mountains”). Millions of years ago, red sand washed out to the Atlantic Ocean from southern Africa. It then flowed north on the Benguela current before it was washed back to shore along a 2,000 km (1,243 mi) stretch of land. Some of that sand remains under the ocean, forming the devastating sandbanks of the Skeleton Coast while the rest blew east into the Namib. Approaching Sossusvlei from the southeast, we passed through gravel plains, eyeing inselbergs and sand dunes in the distance. The long open road with glaring sun beating down showed me one mirage after the next.

As I’ve mentioned before, I didn’t do much research before coming to Namibia. Indeed, I had zero interest in deserts until shortly before I left Cape Town. Sensibly, a friend showed me scenes from the 1974 movie, Animals are Beautiful People. I hadn’t given much thought to what sort of life survives in the desert but the footage of strangely adapted animals and clever ways in which man has found water opened my eyes. Not only did the sand dunes look lovely on film, the life hiding in the desert fascinated me. Although we’d been in the desert for almost a week when we approached Sossusvlei, it was there that I fell in love with the landscape.

Exploring Sossusvlei
Camping inside the park entrance at Sesriem, we were permitted to explore the dunes at sunset, returning to camp within 30 minutes of darkness falling; and at sunrise, setting out 30 minutes before sun-up. Sunset at Elim Dune was the perfect start to my Sossusvlei experience. It’s close to camp and an easy walk to a good spot for watching the sunset. There were few people there the day we visited and most were quiet, keeping conversations to whispers and low tones. The dying light tinged the sand varying shades of crimson and violet. For what felt an eternity, I sat in peace, listening only to the sand rustling in the wind. Like a good dive, that moment on a sand dune cleared my head and reset me to the open and happy person I’ve come to be.

Up early the next morning, we joined the trek up Dune 45, so named because it’s 45 km from the park entrance at Sesriem. The slog up was exactly that. With every slipping step along the ridge sand filled my shoes, weighing me down. My lungs burned and I allowed images from Star Wars and Spaceballs to distract me from the agony (combing the desert anyone?). Finding a spot at the top we rested, watching sunbeams break through the clouds, listening to the murmurs of German tourists. As they quieted I focused on the reds and oranges of the sand around me. The clouds bursting into cotton balls as the wind took them. I knew my camera could not do justice to the beauty around me but, if only to jog my memory later, I dutifully took photos on camera, iPhone, and GoPro. None captured the experience. Nor do these words.

Tired but eager to continue, we headed toward the pans near SossusVlei. To reach the pans, one needs a 4WD vehicle to drive through 4-5 km of thick sand. As we had only a sedan, we parked the car and paid for seats in a 4WD shuttle. More than once, our driver stopped to help tourists struggling with their rented 4WD trucks, driving them through the worst bits and providing guidance about how much air to let out of the tires. From the 4WD parking lot, it’s another 1km walk through the dunes to the landscape that reduced me to tears. Signage and guidance within Sossusvlei are minimal and I don’t honestly know whether I saw SossusVlei. I am, however, confident that I spent ages in Deadvlei.

Once upon a time, the Tsauchab flooded in Deadvlei en route to SossusVlei. Camel thorn acacia trees grew and presumably other plants, too. But the sand dunes shifted and the Tsauchab changed course so at least 600 years ago, those trees died. The sun has since scorched the remaining tree trunks, turning them black. The dry air prevents decomposition so the remains are likely to be there for centuries to come. All around Deadvlei are the highest sand dunes of Sossusvlei, standing 300-350 meters (985-1150 feet) high.

Overwhelmed in Deadvlei
Reaching the edge of Deadvlei I parted from my traveling companion. This was unlike anywhere I’ve been and I sensed immediately I needed to experience it alone. I wandered along the clay floor among the wooden skeletons. Finding a small pan with no one in it, I sat down beside the withered trunk of a camel thorn. Flies buzzed around me, landing on my nose or lip then my head or shoulder. A few insects crawled around but otherwise I saw no evidence of life. As I looked about a crushing sadness washed over me and, without warning, I began to weep. These weren’t the quiet tears of Pompeii or the Acropolis but full on sobbing. It had nothing to do with me or my life, it was about something bigger and older than I’ll ever be. This land is old. The Namib Desert is at least 55 million years old, maybe closer to 80 million.  It is harsh. The plants that survive here get most of their moisture from morning mist. Some tap into underground water sources but not in Deadvlei. Animals that can travel to water sources such as springbok and other antelope sometimes come through. I could see the scat proving it. But man, even the ancient San bushmen, could not survive in this part of the Namib for long. Blazingly hot by day and cold at night with no water for decades at a time, very little life has called this part of Earth its home. For more years than I can fathom. The still air pressed against me and I looked up at the towering dunes of ever shifting red sand. For a little while, I let the desolation envelop me. 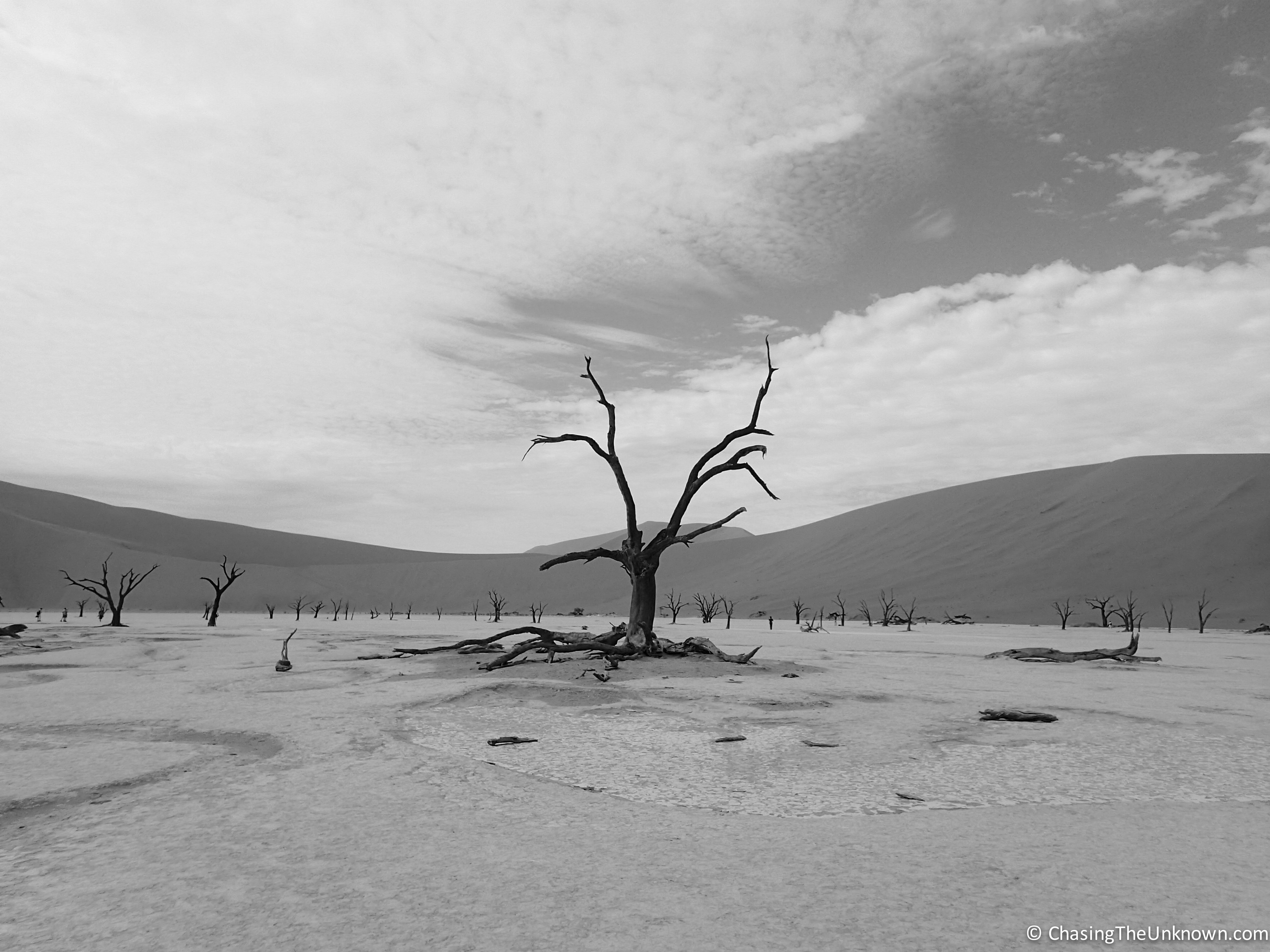 My tears didn’t last long but over the days that followed, I felt the weight of Deadvlei and found myself repeatedly lost in thought. In Pompeii and Athens I contemplated the history of mankind. At Sossusvlei, it was the history of our planet and all forms of life that took over my thoughts. That plants and animals have adapted to survive in this landscape – something humans cannot do for any serious length of time – was a humbling reminder that human life is, in some ways, far less advanced than that of Earth’s other inhabitants. I still can’t explain the crippling sadness that gripped me for that brief time. If I were a spiritual person I might describe it as having tapped into a source of energy that withstood unbelievable hardship and yearns for release. Maybe that’s what happened. Maybe in a past life I was a tok-tokkie beetle that lived in the Namib. Or maybe I’m just prone to crying when confronted with the remains of long-dead life. Whatever happened to me that day in Deadvlei it was a turning point. From that day on I loved the desert and when our route took us away from it, I longed to return. It also started me down a path to focusing on things I need to change in my life. This post has been personal enough without me delving into that subject. Suffice it to say I feel good about the shift in my perspective and the direction I’m turning toward.

Like skydiving over Fox Glacier in New Zealand, visiting Hiroshima Peace Memorial Park in Japan, exploring temples in Myanmar’s remote Mrauk-U, and the muddy joy of the Gibbon Experience in Laos, my time at Sossusvlei left an indelible mark on me. I feel, yet again, unbelievably lucky and grateful to be living the life I am.

2 thoughts on “Sossusvlei: So Much More Than Sand Dunes”