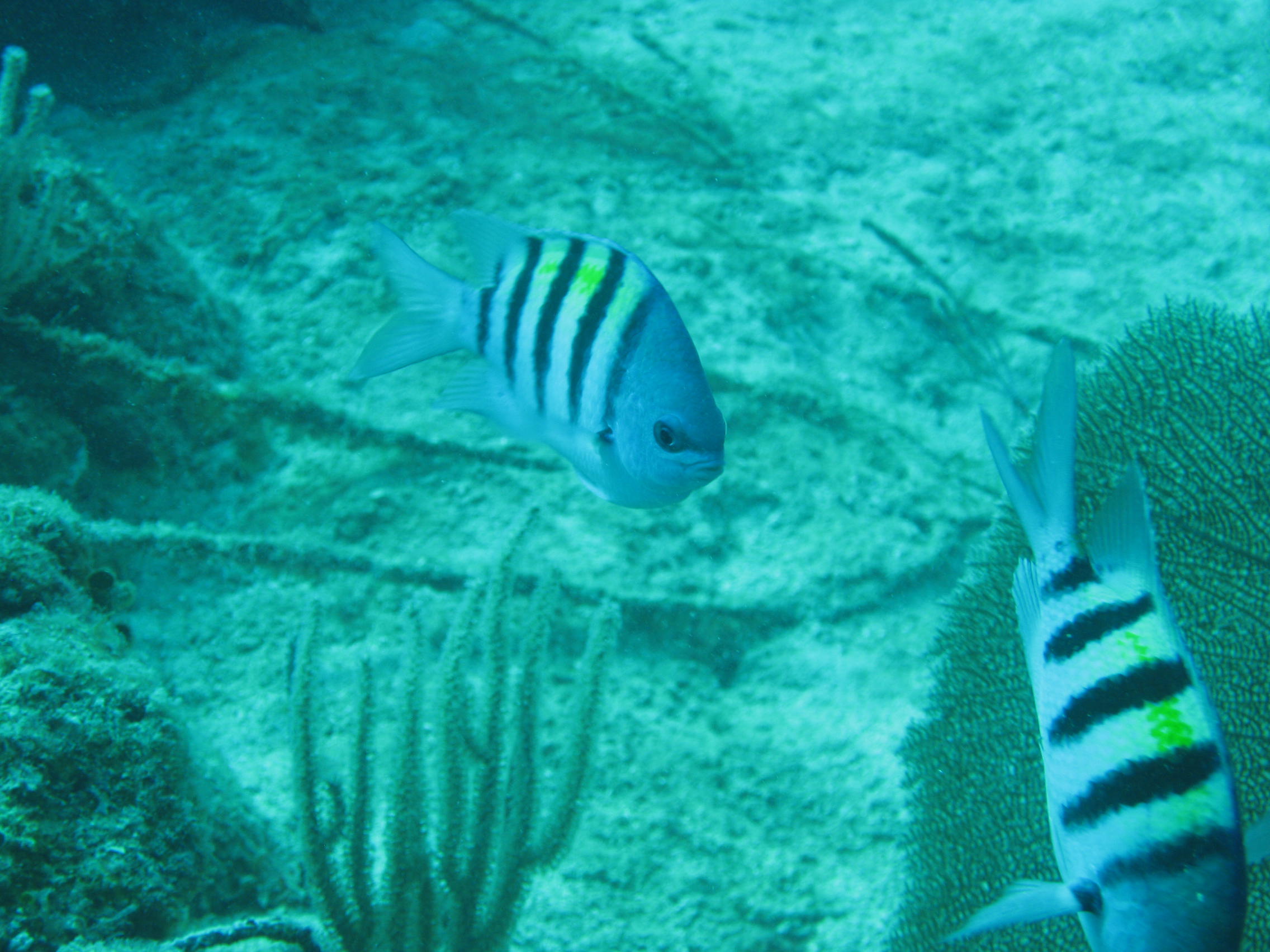 Our schedule here on Utila is dictated by 4 things: hunger, fatigue, weather, and diving. On days when we aren’t diving, we eat when we’re hungry and sleep when we’re tired. If the rain is torrential and the streets muddy, we hole up somewhere with e-books or watch something we downloaded onto the computer when the internet actually worked. The television is based on satellite so when the rain is bad, we have nothing but static and the internet stops working, too. Sometimes we find ourselves stranded when the rain breaks out so we find an awning or stay put at the restaurant, bar, or dive shop where we’d been before the onslaught of water. But when we’re diving, the weather doesn’t matter so much and we time everything around the boat’s schedule.

One of the reasons we came to Utila is for the SCUBA diving. The coral reef is teeming with life and whale sharks are regularly spotted here. On top of that, it’s one of the most affordable places in the world to become a PADI Divemaster. When we arrived, we both had only our Open Water certification so we jumped straight into an Advanced Open Water course. Five dives in two days plus book work and we were done. The dive shop we’re working with, Utila Dive Center, offers two free fun dives following your Advanced course and following one of those, we enjoyed the most fun surface interval we’ve ever shared. For those of you who don’t dive, a surface interval is the time between dives necessary to allow at least a little excess nitrogen to leave the body before going back under water.

At UDC, when a boat captain learns that a whale shark is in the area, he asks the divers if they want to extend their surface interval and head for the whale shark. For 300 Lempiras (about $15) per person, he’ll circle the boat around the whale shark and call out when to get in the water. Divers sit on the back of the boat, wearing masks, snorkels, and fins (maybe a wetsuit if you hadn’t taken it off already) and on cue, glide into the water as softly as possible while immediately looking down. If the Captain got it right and you get in the water swiftly, this is what you see.

This was a baby whale shark and if we’re lucky, we’ll see an adult before we leave Utila. These massive creatures are simply stunning and the adrenaline rush of floating above one, even for a moment, leaves nearly everyone smiling for the rest of the day. On the day we saw this one, minutes after the Captain declared that it had moved on and we’d be heading to our next dive site, cries erupted around the boat, “dolphins!” A pod of bottlenose dolphins was jumping around us and the Captain stopped the boat. Fins were hastily pulled back on and masks and snorkels grabbed as people ran into the water. For reasons I can’t recall now, we chose to stay on the boat and watch the fun from there.

People who went in told us later they could hear the dolphins chatter away underwater but they often had no idea how many dolphins surrounded them. From our vantage point on the bow, we had multiple places to look. Dolphins were jumping up around the boat; circling one or two snorkelers at a time; playing in snorkeler-free groups; and generally having what looked like a grand old time. I don’t remember much about the dive that followed although I do recall a number of people sitting it out, knowing that it wouldn’t top the experience we’d just had.

One thought on “Whale Shark!”