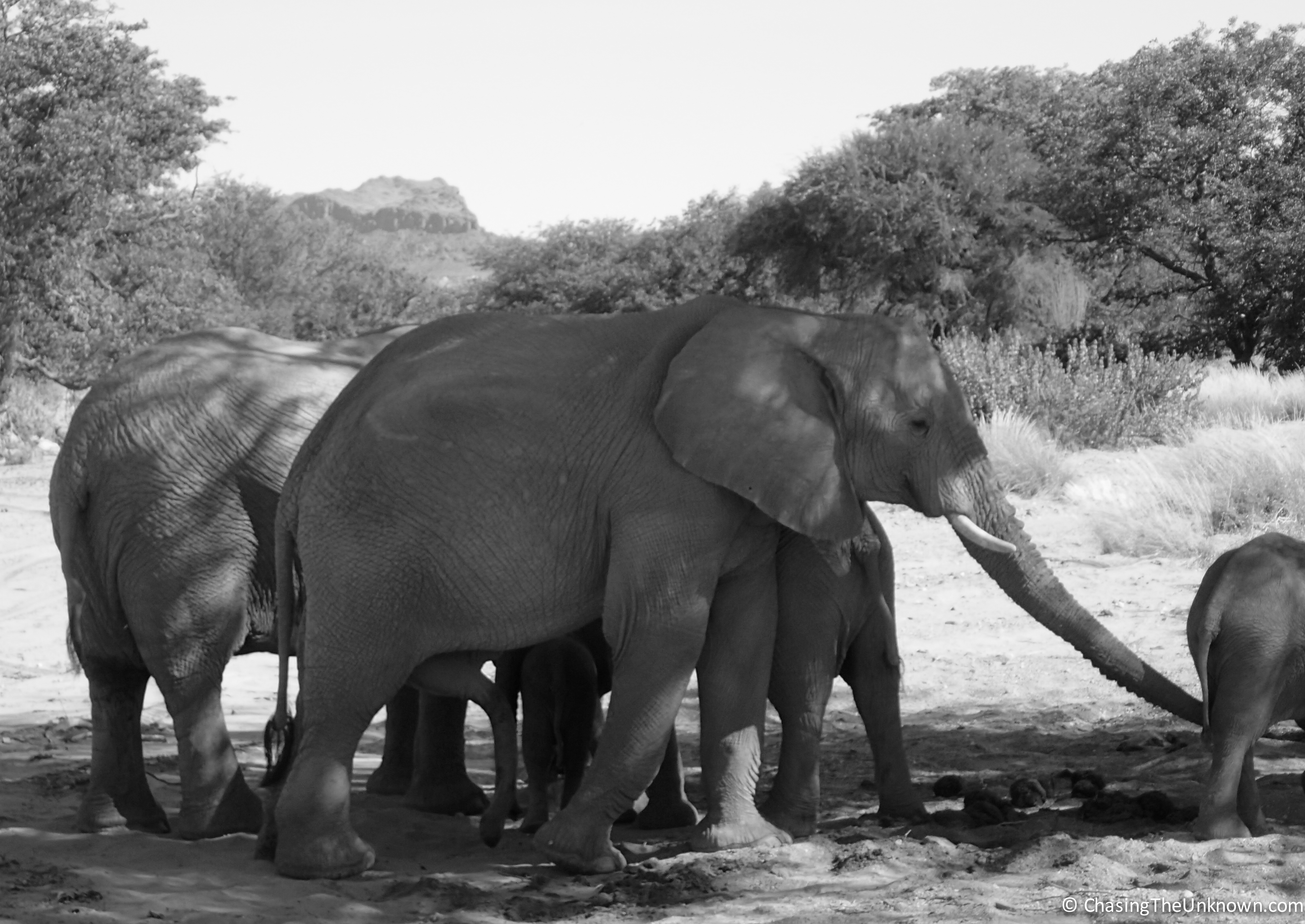 As mentioned in a recent post about plants, Namibia wildlife astounded me day after day. I’ve been in Africa for more than six months now and have seen an overwhelming amount and variety of animals. Even the ones I see regularly such as baboons and goats still excite me. Unless I’m seeing those baboons in a campsite, then I’m not a fan.

In South Africa and Swaziland, most game is limited to national and private parks and game reserves. It’s nearly impossible to see a wild elephant or giraffe. Even antelope are rarely seen outside protected areas. In Namibia, there’s a plethora of animals in the national and private parks and reserves but there are still wild animals in the wild. Except for those photographed in the campsite of the Waterberg Plateau Park, all animals pictured here were seen outside of designated parks or reserves.

I don’t have decent images of the wild ostriches, oryx, springbok, steenbok, kudu, dik-dik, mountain zebras, monitor lizards, or colorful birds we saw while driving, walking, or sitting on rocks. I wish I did. And I wish I had a video of the springbok I saw one morning as it took off pronking across the desert. That video I’ve linked to fails to capture the beauty of a wild lone springbok going from a standstill to leaping its graceful way across rocks and sand. It’s a moment I hope never to forget. Without further ado, wildlife of Namibia part two: the fauna.

In the southern part of the country, between Aus and Lüderitz along the paved B4, is a small sign with the words “Feral Horses” and an arrow. At the end of a 1.5km corrugated gravel road is a small shaded hide looking out to a man-made borehole. The waterhole was built for railroad use in the days of steam locomotives but is now a draw for animals and thus tourists. The feral horses that live in this stretch of the Namib Desert are some of the only desert-dwelling horses in the world. There are multiple theories on where the horses came from (shipwrecked in transit from Europe to somewhere else? abandoned by German or South African soldiers? descended from the stock of those brought over by a German baron? brought by the Nama as they moved about? escaped racehorses and workhorses used in the mines near Kolmanskop and Lüderitz?) and I have no good way to assess the reliability of these theories. This website is a good resource if you’re interested in learning more. What I do know is that these are the scrawniest horses I’ve seen. They can last for up to five days without water and are smaller than most horses. Without the borehole at Garub, they likely would have died out long ago. We saw a few of these horses alongside the B4 on our way to and from Lüderitz and each time I was shocked at how skinny they were, their scruffy manes lackluster and limp. 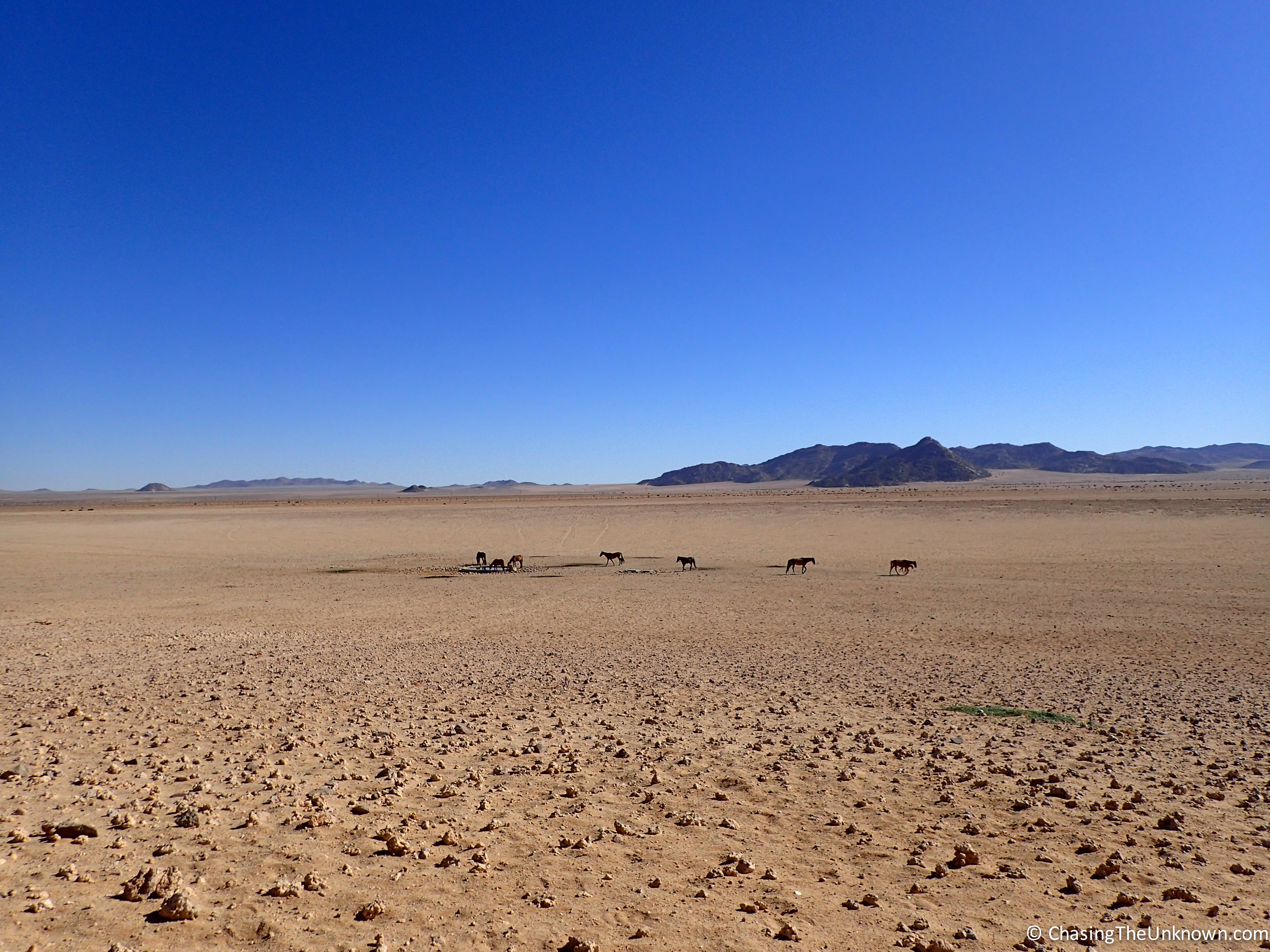 Flamingos aren’t exactly unique to Namibia but no matter where they are, they’re fun to watch. I saw a small flock near Lüderitz and a few bright pink birds momentarily colored the gray sky of the Skeleton Coast one morning. But in Walvis Bay, I watched these birds for the better part of an hour. One would walk a few meters toward shore, perhaps stick its beak in the water or sand or just stand there and immediately 90% of the flock would follow. Just as quickly, another bird would turn and head a different direction and the rest would follow suit. A car passing on the road or a pedestrian so much as sitting down on a bench would send them all scuttling away from shore, making a racket as they did so. If all was still for more than about 45 seconds, they all scurried back to where they’d been before noise or movement disturbed them. 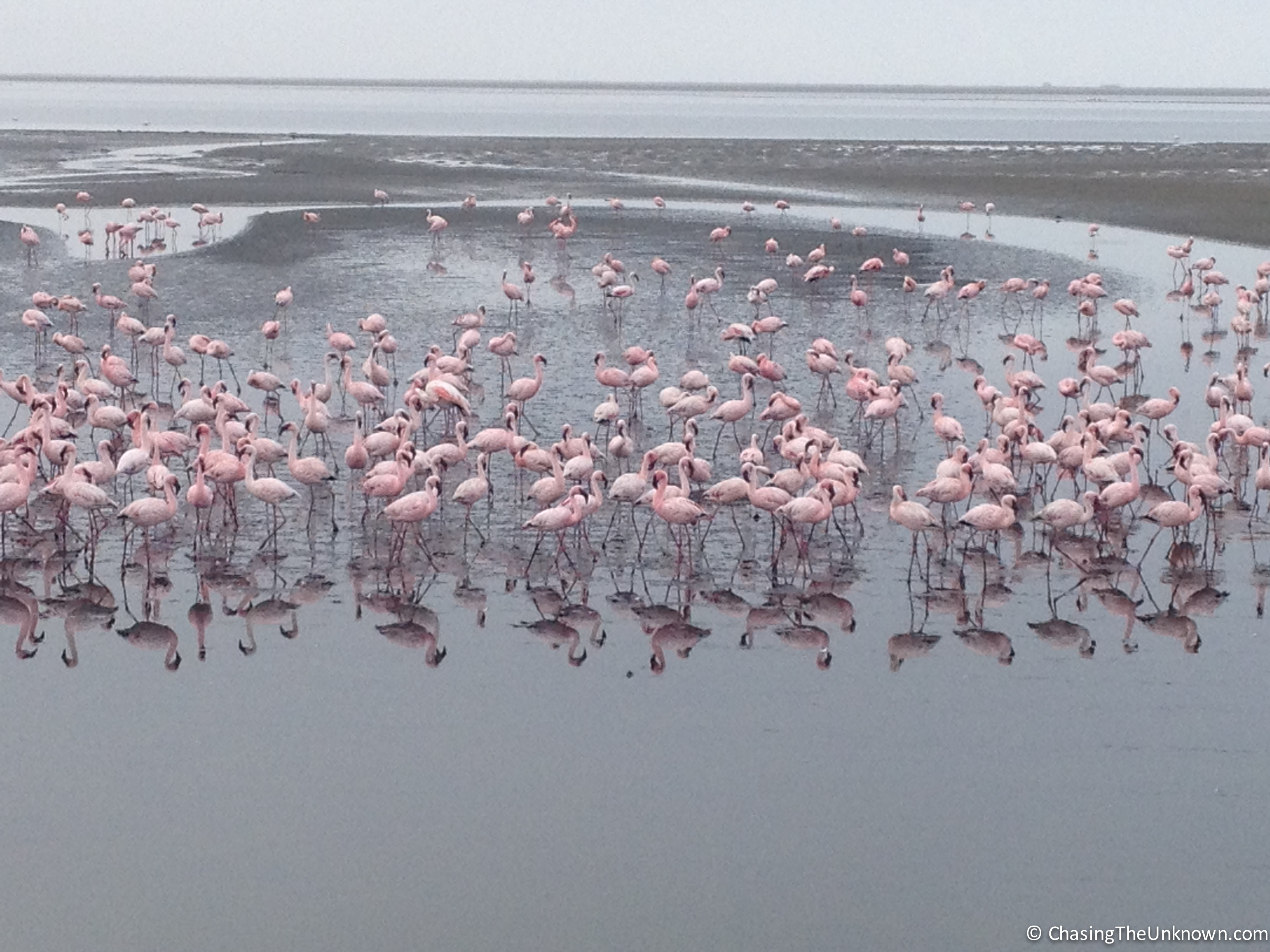 I didn’t do any diving in Namibia as the only place to do so is a lake. As it’s technical diving, I wasn’t interested. But I can’t resist including a couple photos from Agate Beach.

As I’ve written before, we took a two-wheel drive sedan to Namibia, a country where most of the roads are corrugated dirt and gravel tracks. We had some bone jarring, teeth rattling drives but it was always worth it. The scenery was stunning and from time to time, something unexpected happened. Like coming across a tower of wild giraffes on the C40 just outside Palmwag. When we crested a hill and saw a giraffe on our right, I honestly thought it was a wood carving. We were so close to a town and I couldn’t imagine that wild giraffes would be wandering around in this day and age. But no, it was real. And so were the next dozen we saw.

The Kunene Region of Namibia is a stretch of land in the northwest quarter of the country, inland from the Skeleton Coast. It’s home to some interesting people and history that I’ll share in future posts but also to Namibia’s “desert elephants.” These elephants are not found anywhere else in the world and they’re completely wild. Like the feral horses near Garub, the elephants are smaller than their more common relatives who have not adapted to the desert. They can travel up to 60 km in one night and go four or five days without water. It’s believed that knowledge of rivers, streams, and waterholes is passed down through generations of these magnificent beasts. Their feet are larger than the typical African elephant and their legs can be a bit thinner. When we heard at Twyfelfontein that a herd was in the area, we paid to get ourselves into a 4WD vehicle with a guide so we could see them in the dry Huab riverbed.

Not much explanation is needed for the rest of these. They’re just more photos of Namibia wildlife that don’t seem to fit in any other blog post but seem worth sharing.

Some sociable weaver nests are protected by a pygmy falcon. This one was not. Whether the mole snake did away with the weavers or they abandoned the nest before the snake’s arrival, I couldn’t tell you. 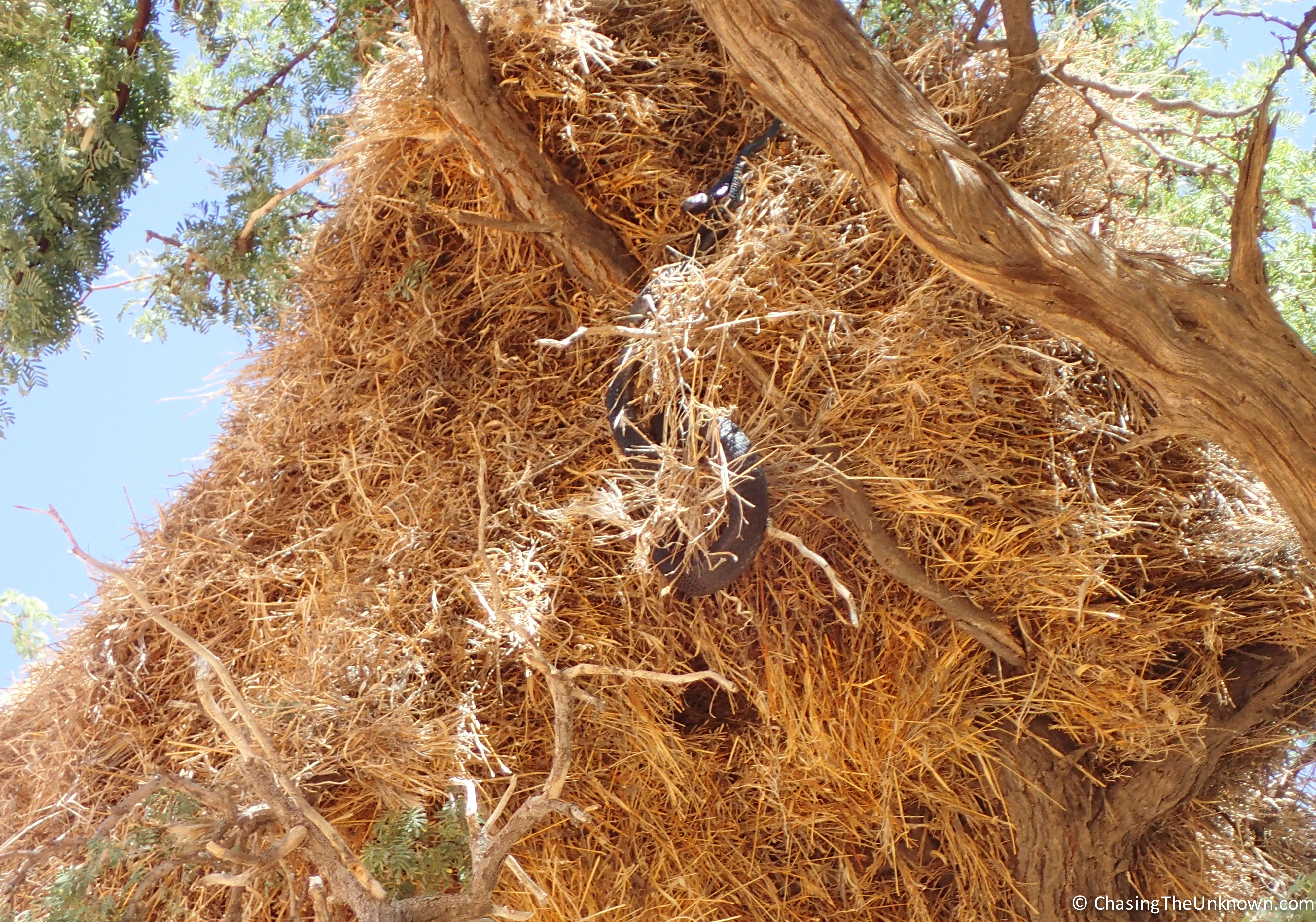 Warthogs are skittish and don’t seem to enjoy having their photos taken. I saw them in plenty of campgrounds and running about wild in the eastern parts of Namibia but never managed to get decent photos.

Banded mongooses are another of those camera shy animals that I saw multiple times, often near campgrounds. They tended to run off when I approached. It seems they had more tolerance for my traveling companion.

Donkeys are as ubiquitous in Namibia as sheep are in New Zealand. Ok, maybe there aren’t quite so many but it feels like it. In much of the country there are no fences along the roads so animals wander where they wish. I lost count of how many times we had to stop the car to wait for the damn things to get out of the way. 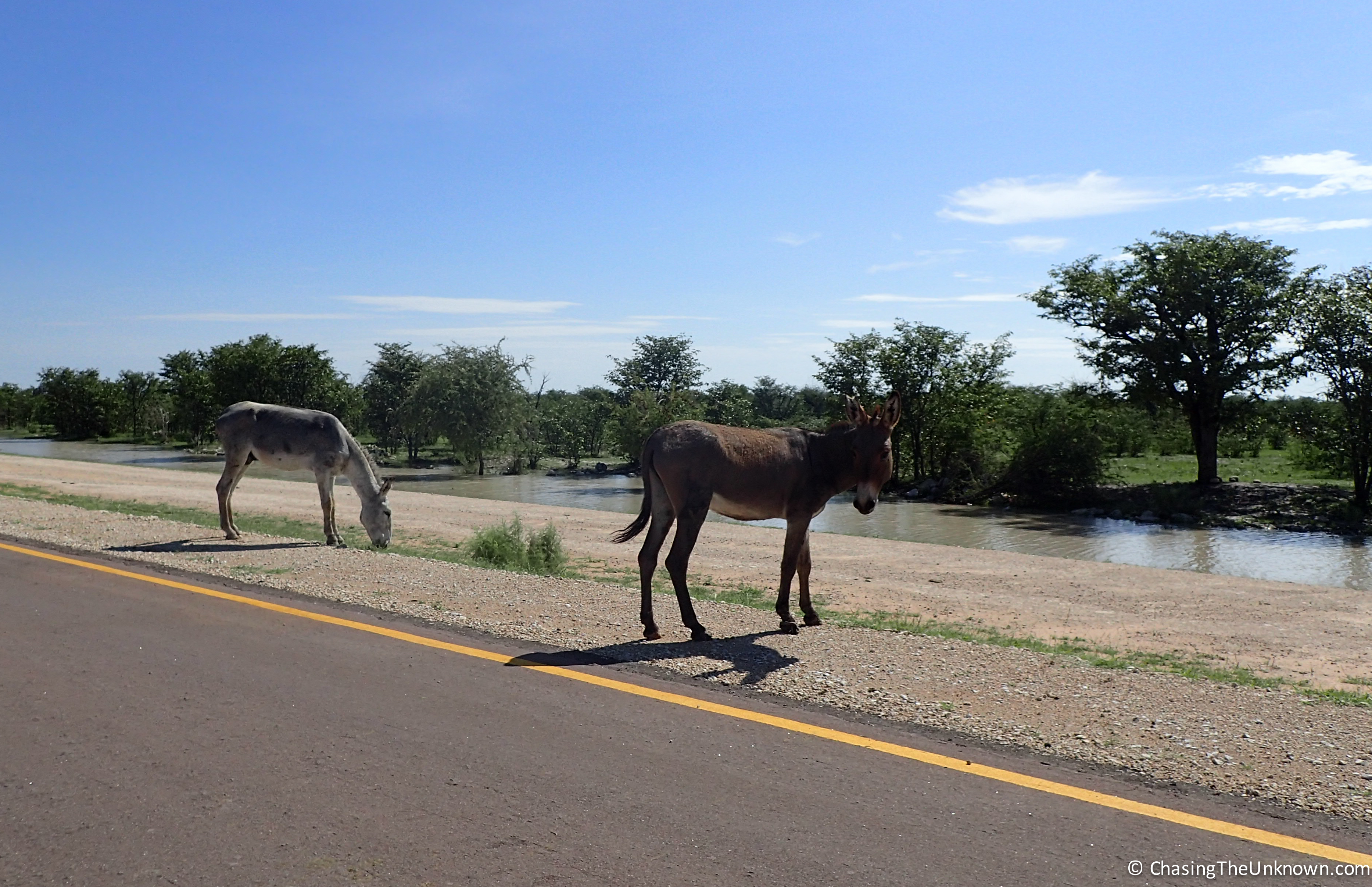 As stated at the outset, I saw far more than is pictured here. And I’ll be the first to admit that most of these photos don’t do justice to what I saw or felt. There’s nothing like watching wild elephants move around their young to protect them from camera shutters and 4WD trucks. Or seeing a tiny dik-dik blink its big eyes while you walk past. The thrill I felt after seeing wild giraffes when we saw wild mountain zebras along the same road made the misery of a five hour, 220km drive disappear. Even today when I think about those giraffes and zebras, I can’t help but smile. It’s a privilege to have seen so many wild animals in their native habitat and I thank my lucky stars for being given that privilege.