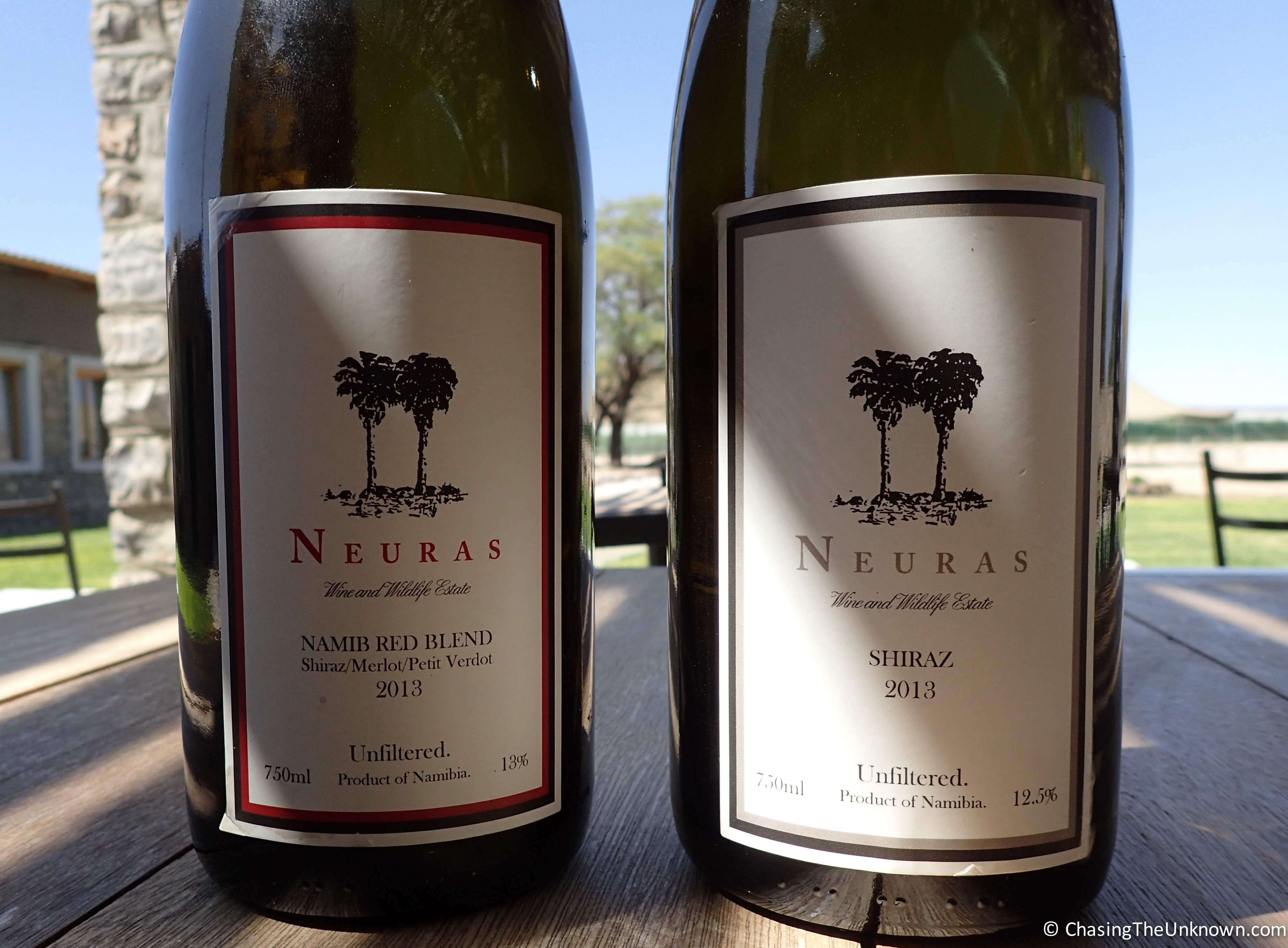 More than once I’ve mentioned that I didn’t do a great deal of research or planning for my Namibia trip. But there was one very important subject I looked into with great detail: wine. Specifically whether anyone produces it there. The answer – obvious from the title of this post – is yes, there are wine producers in Namibia. Four of them, actually. But only three are open for tasting. Two were completely out of our way but as I traveled with someone equally crazy about the idea of wine tasting in Namibia, we made it to all three, plus a distillery. The wine, tasting experience, and value all got progressively better with each winery we visited. Our first stop was the winery with the flashiest website and the least exciting wine. 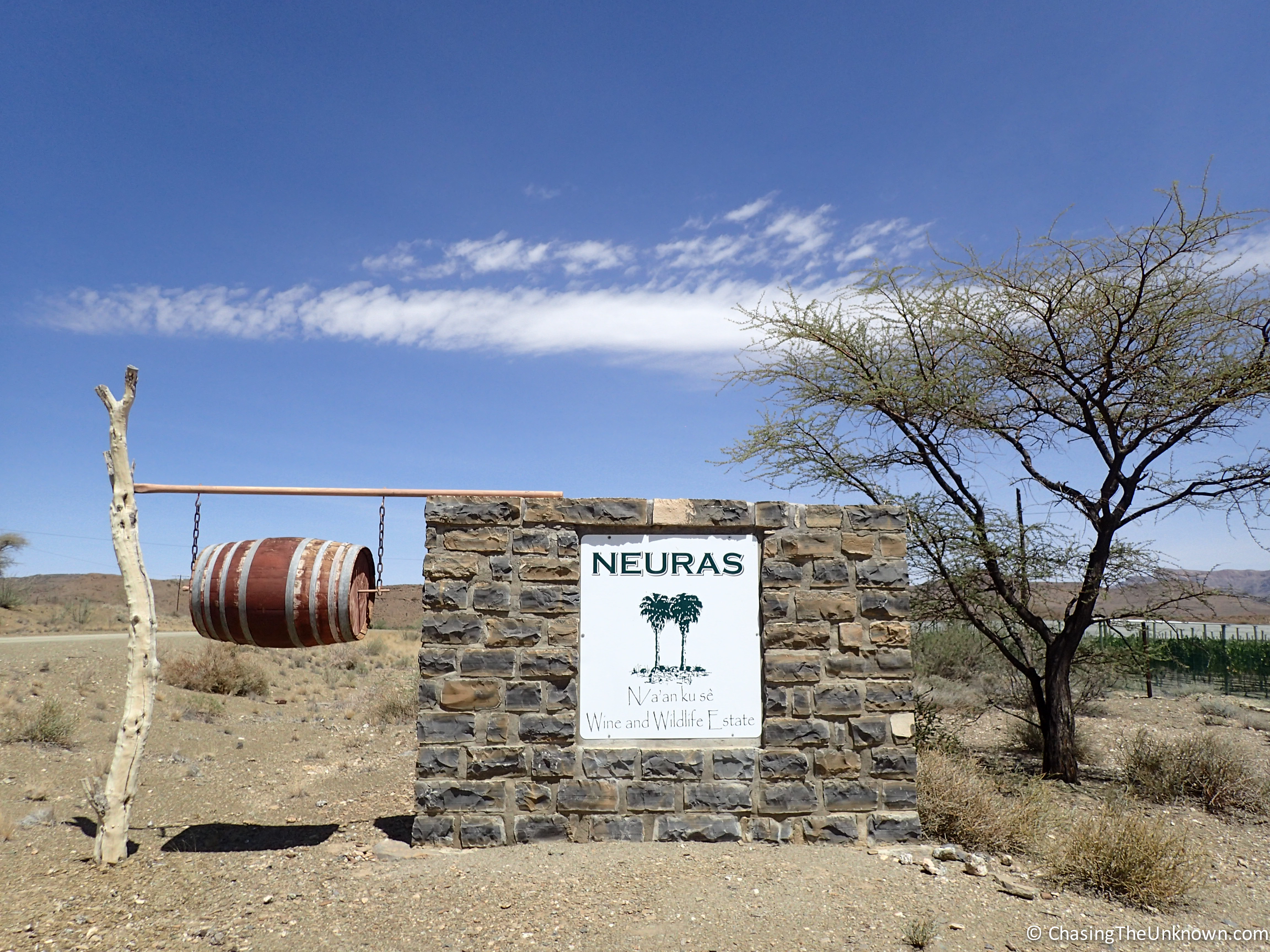 Claiming to have the driest terroir in the world, Neuras is fed by five natural springs allowing vines to grow. Founded in 1996 by a husband and wife team, Neuras is now owned by N/a’an ku se Foundation, a land and wildlife conservation foundation. Neuras makes approximately 3,000 bottles each year. Half are shiraz and the other are what they label Namib Red: a blend of shiraz, merlot, and petit verdot. According to staff we spoke with, both are aged for 10 months in French oak before bottling but I’m not convinced this was true for both wines. The shiraz was one of the lightest, easy-drinking I’ve encountered. The Namib Red was decent but at N$295 a bottle (approximately $19 at the time I visited in February), overpriced. I recognize that production is limited and sales occur almost entirely to visitors like us. But for the same amount at a South African winery, I can buy a bottle of wine I could cellar for 15 years and trust to be outstanding. The labels of Neuras wines read, “Best enjoyed young.” 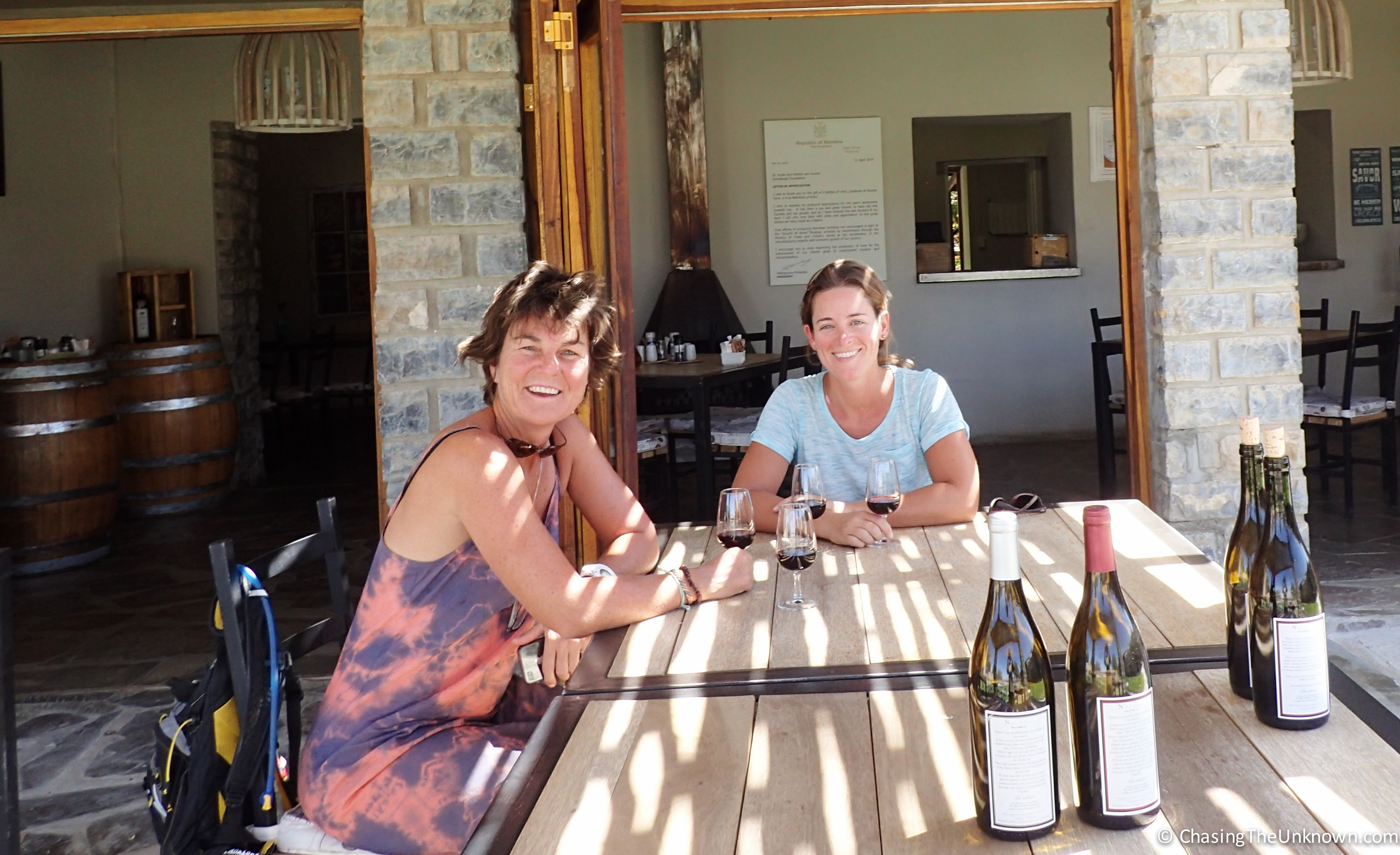 The current owners planted new vines in 2012 and anticipate production increasing to 5,000-9,000 bottles in the years ahead beginning with the 2017 harvest. Or so the staff told me. The website indicates they expect to increase to 15,000 bottles beginning this year. They’ve also introduced a brandy and port-style wine but both were sold out so I didn’t get to try either. Apparently groups come through and tend to wipe out the stock. The staff at Neuras were friendly and welcoming but not particularly knowledgeable about the wines. Getting someone to answer my questions took effort – and many went unanswered. By the time we departed, I was pessimistic about the remaining wineries.

Getting to Neuras is no easy task, especially if driving a sedan. It’s about 80km from Sesriem so it was our first stop after Sossusvlei. The bone-rattling, corrugated, rocky roads made for slow going while the changes in landscape along the way distracted us from the agony. We went from the red sands of the Namib to the rock-strewn hills of the Naukluft, back to the edge of the Namib, crossed the Tropic of Capricorn, over the Gaub Pass with its deep ravines and dark folds of earth, then headed into the scorchingly hot Namib-Naukluft Park, ending our day in windy, salty Walvis Bay. Along the way we stopped for kudu and baboons crossing the road (not at the same time) and encountered two dazzles of zebras. The detour to Neuras made for a long day and the wine itself wasn’t particularly memorable. If you only have a chance to visit one winery in Namibia, Neuras should not be your first choice. 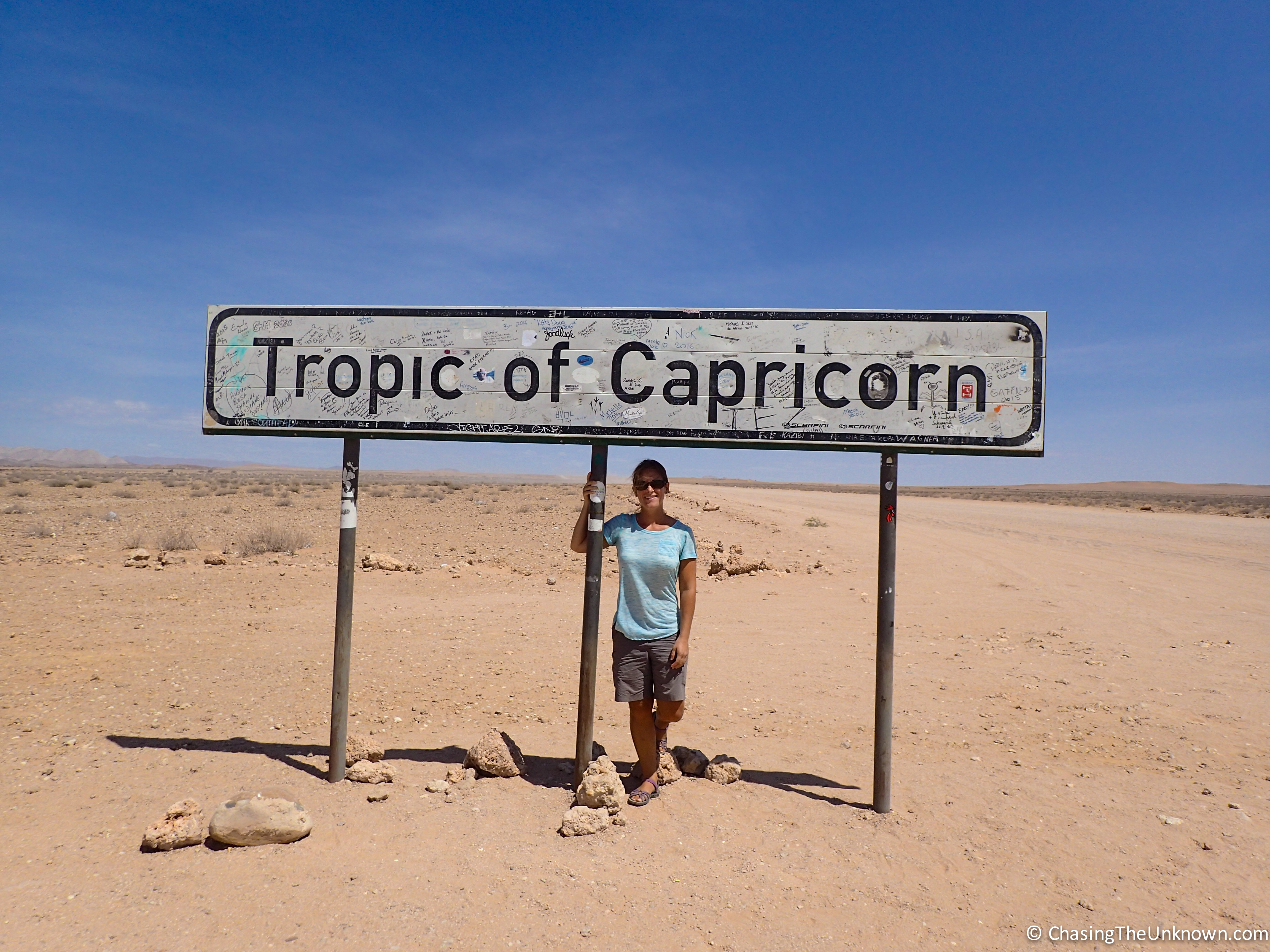 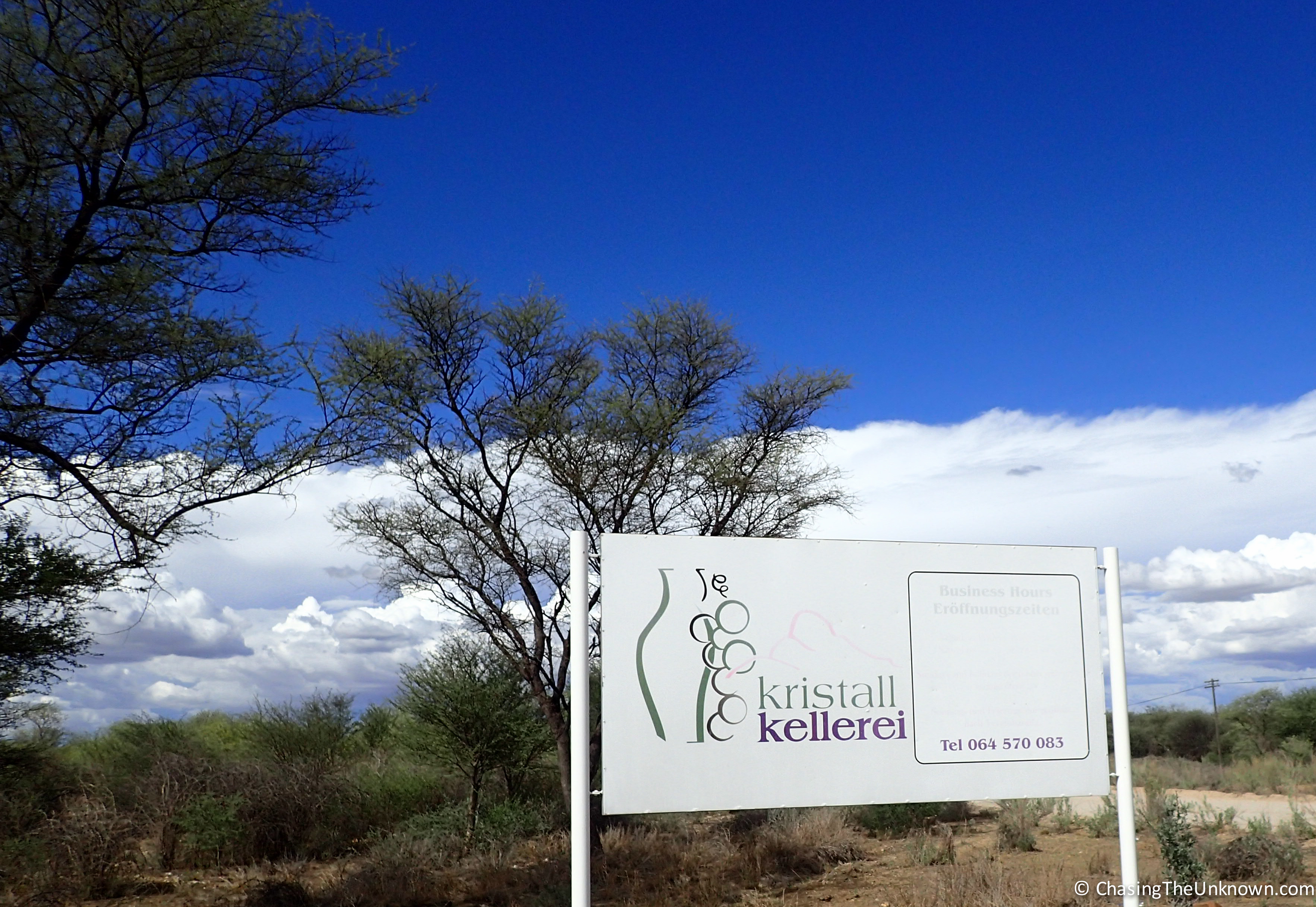 With the Omaruru River sometimes flowing nearby, Kristal Kellerei, just outside the town of Omaruru, manages to produce 6,000 liters of wine each year. After time in stainless steel tanks, this winds up in 12,000 500ml bottles. If water supply permits, they hope to eventually increase to 30,000 liters/year. The winery was started in 1990 and the current owners took over in 2008. Over the years, they’ve tried to grow shiraz and merlot without luck so these days focus on one red and one white. The red is dubbed Paradise Flycatcher. It’s a forgettable Tinta Barocca rounded out with a bit of Cabernet Sauvignon and Ruby Cabernet. I’m sure that some years are better than others. For their sake, I hope so. The white is a pleasant, easy-drinking Colombard. We arrived just before the tasting room closed after a harrowing day that involved changing a tire on the side of an uneven unpaved road. This may be why my notes from the tasting are as short as they are. Or perhaps it was because I tasted a few of Naute Kristall’s schnapps on an empty stomach. More on that later.

Far more memorable than the wine is Olga, the sparky woman who runs the tastings, sales, and quite a bit more. Full of information about Omaruru, all the wines of Namibia, and the country in general, she’s an excellent ambassador for the area. It was from her that we first learned of a fourth winery, not open to visitors. And we learned that the red wines of Thonningii, the northernmost of Namibia’s wineries, are worth hunting down. I appreciated Olga’s honesty and learning that the winegrowers of Namibia support each other. All the wineries aim to get their product in restaurants, resorts, and otherwise in front of tourists and there’s ample market space for all. Each produces very different wine – not surprising given the different geography of each winery. None produces enough to supply all demand nor are they trying to do so. South African wine is affordable, decent, and widely distributed throughout Namibia. But I’m not the only tourist who prefers to buy local when possible. As production increases at each of the wineries, I hope they continue working together, perhaps on a marketing campaign to promote one of Namibia’s most unexpected products. 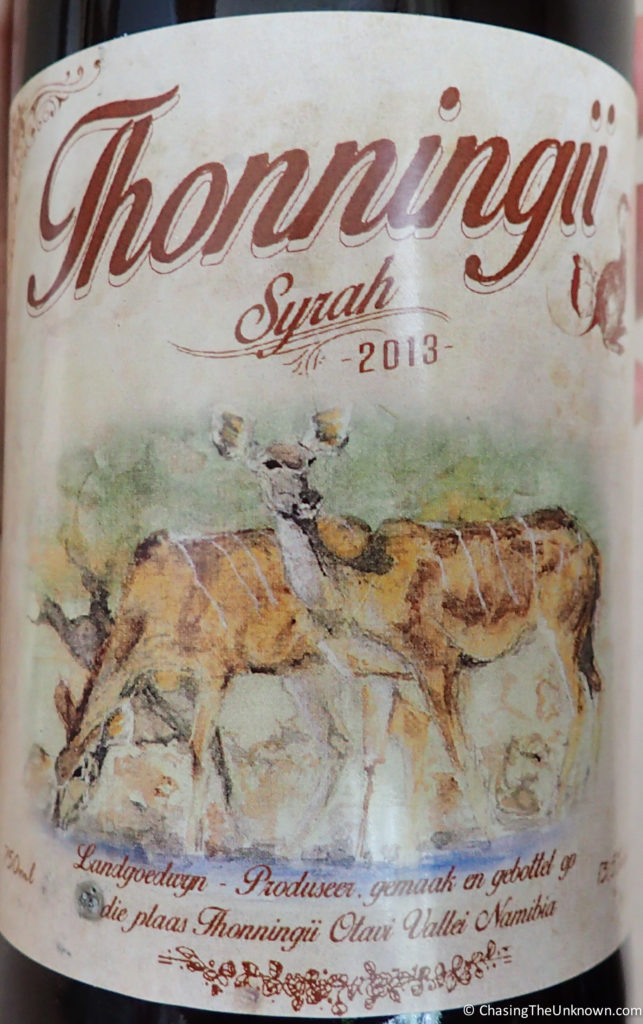 Unlike Neuras and Kristall Kellerei, Thonningii was on our way between places we planned to go. For anyone traveling between Botswana and Etosha National Park, it could be a slight detour along excellent paved roads. We were going from the Waterberg Plateau to Zambezi (the region formerly known as the Caprivi Strip) which meant we drove straight past Thonningii. Well, we turned in to pay them a visit but only because I’d called and received very specific directions. There is no sign along the road directing visitors to the winery nor a road sign at the turn-off. This isn’t by design, it’s a matter of the family that owns the farm not owning the land abutting the road and lacking permission to erect signage. Fortunately, an advance appointment is required for all visits and excellent directions are given.

The farm was started by Dr. Bertus Boshoff, a general practitioner who still practices medicine in Otavi. In the late 1990s he taught himself to make wine by reading books and experimenting with his own grapes. In time, his son went to South Africa and studied then worked on wine farms near Cape Town. Today, that son is Thonningii’s wine maker while Dr. Boshoff spends more of his free time tending to his game (eland, wildebeest, kudu, and black-faced impala). I failed to note the son’s name and for that, I apologize. He took us on a walk in the vineyards, into the production room, answered all our questions, told us a great deal about Thonningii’s wines, then sat down with us for a tasting. The farm is Dr. Boshoff’s home and everything about the building dedicated to wine feels homey yet professional. His wife’s pottery decorates the tasting room and much of the furniture is handcrafted. Dr. Boshoff appeared a few times during our visit and was kind enough to not only answer questions about the winery but also whether we should take anti-malarials for the Zambezi region (his answer: yes). 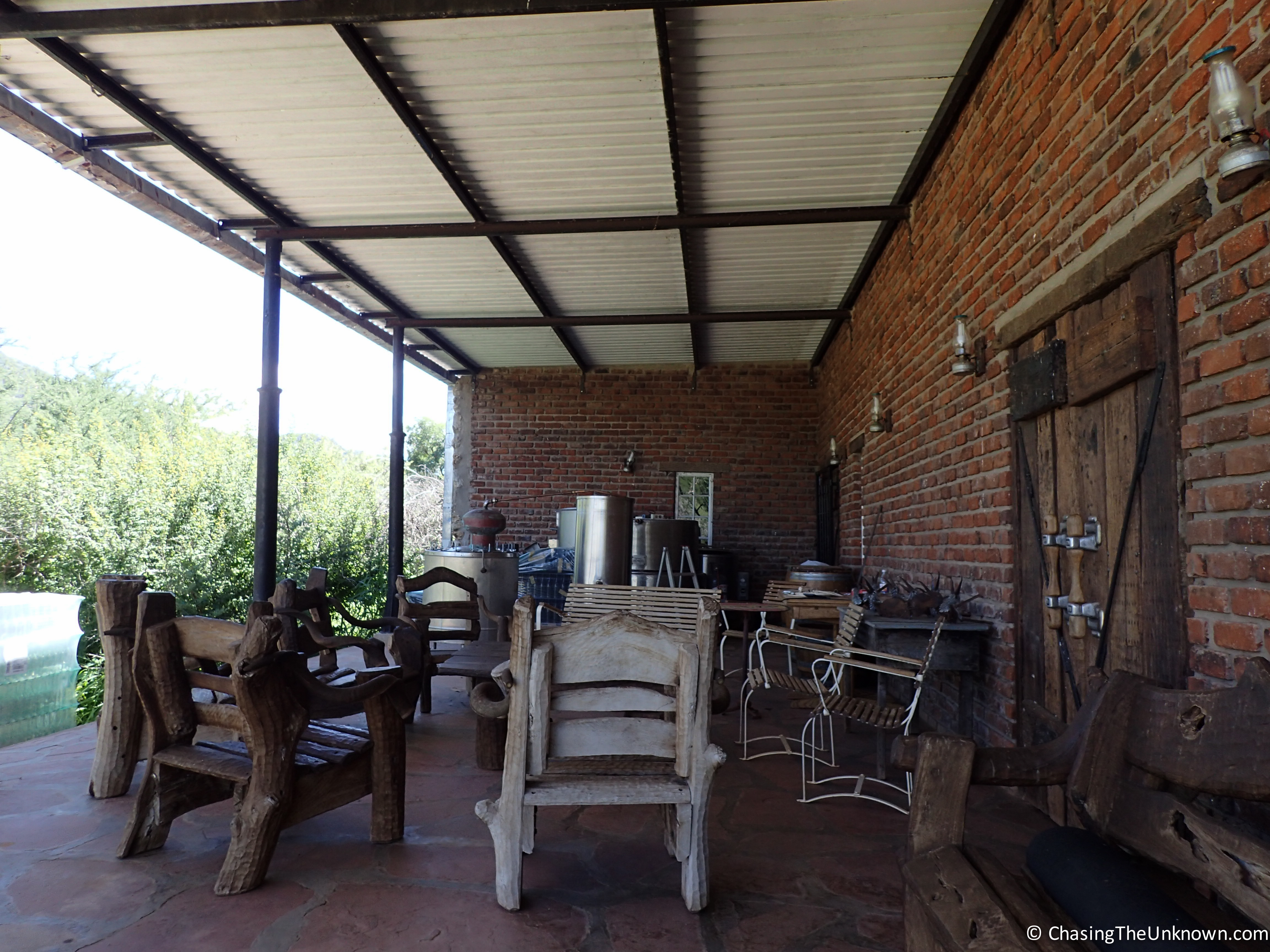 Thonningii’s specialty is Syrah, the grape best-suited to the Otavi valley climate. They’ve also managed some Colombard and Viognier that they use for a white wine we sampled from the “barrel” and have recently planted vines of Barbera, Verdhelo, Mourvèdre, and Tannat. Whether any of those will prove successful remains to be seen. Total production typically ranges between 2,000 and 3,000 liters although they’re hoping for 5,000 next year. There were no bottles on hand of the white or rosé, hence getting to taste the white straight from a stainless steel tank. I suspect it’ll be an easy-drinking white that sells out quickly to visitors. Not too long ago father and son were cleaning out the storeroom and the son opened a bottle of 2009 Syrah destined for a grappa-making experiment. This turned out to be the best Namibian wine we had. At N$150 (about $9.75 when we visited in March), we didn’t hesitate to buy a bottle. We also picked up a younger Syrah for N$100 that was lovely but not quite as complex as the ’09. 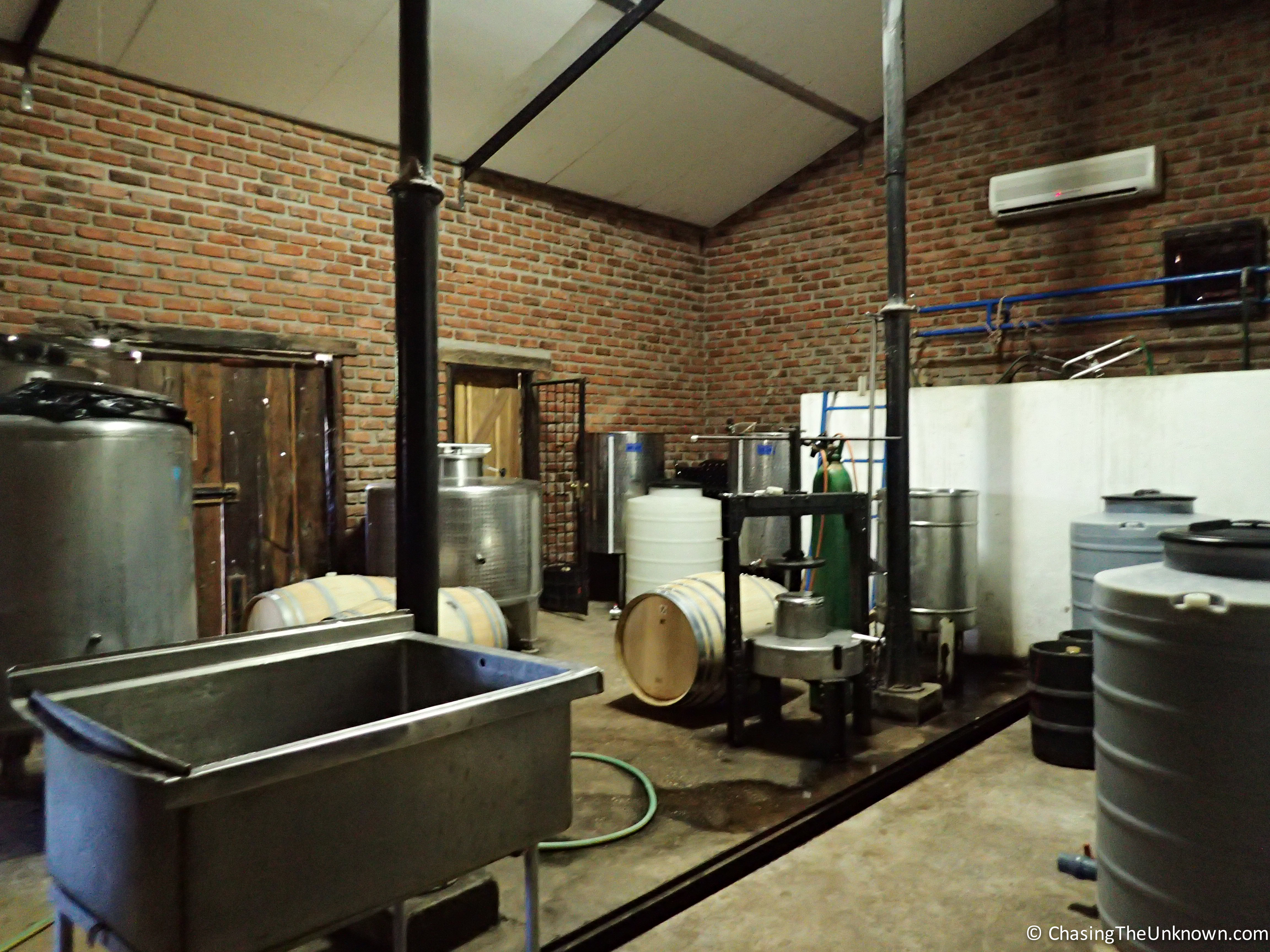 Although it requires the advance planning of a phone call, a tasting at Thonningii is a wonderful experience. The people are welcoming and passionate about what they’re doing, the wine is good – and appropriately priced – and the region is beautiful. In early March, the Otavi Valley was so lush it felt as though we’d left Namibia entirely. Under the guidance of its South African trained winemaker and located along the B8 between Otavi and Grootfontein, Thonningii has the potential to land squarely on Namibia’s tourist map. Like Red Mountain Winery in Myanmar, I hope it does.

Bonus: The Spirits of Naute Kristall
After we tasted the wines of Kristall Kellerei, Olga poured us a taste of gin, then one of grappa, then a “monkey orange” schnapps. All are made by the same folks who own Kristall Kellerei out of their new distillery near the Fish River Canyon. In that part of the country, dates, pomegranates, prickly pears, table grapes, and other fruits are grown in large quantities, most of it for export. Until recently, literally tons of that fruit was going to waste each year when it didn’t meet export standards. Now it’s used for spirits including export-quality schnapps. When we headed to the Fish River Canyon at the tail end of our trip, we stopped by and tasted the full line. Katrin Weder, one-half of the couple who own Kristall Kellerei, provided a lovely tasting experience, complete with bite-sized servings of cheese, fruit, and meat for those who eat it. I’m not enough of a schnapps drinker to comment on the quality of their products but I can’t say anything bad about the gin. They’re working on exporting schnapps to Germany and we saw their products on the menu at the widely known Joe’s Beerhouse in Windhoek.

Wine won’t become a backbone of the Namibian economy, nor will it become a major draw for tourists anytime soon, if ever. But in a nation known for its deserts, visiting a winery is a welcome change of pace and I’d recommend stopping at any of the three that you can manage to see. If you can only pick one, my vote is for Thonningii.

5 thoughts on “Wine Tasting in Namibia”