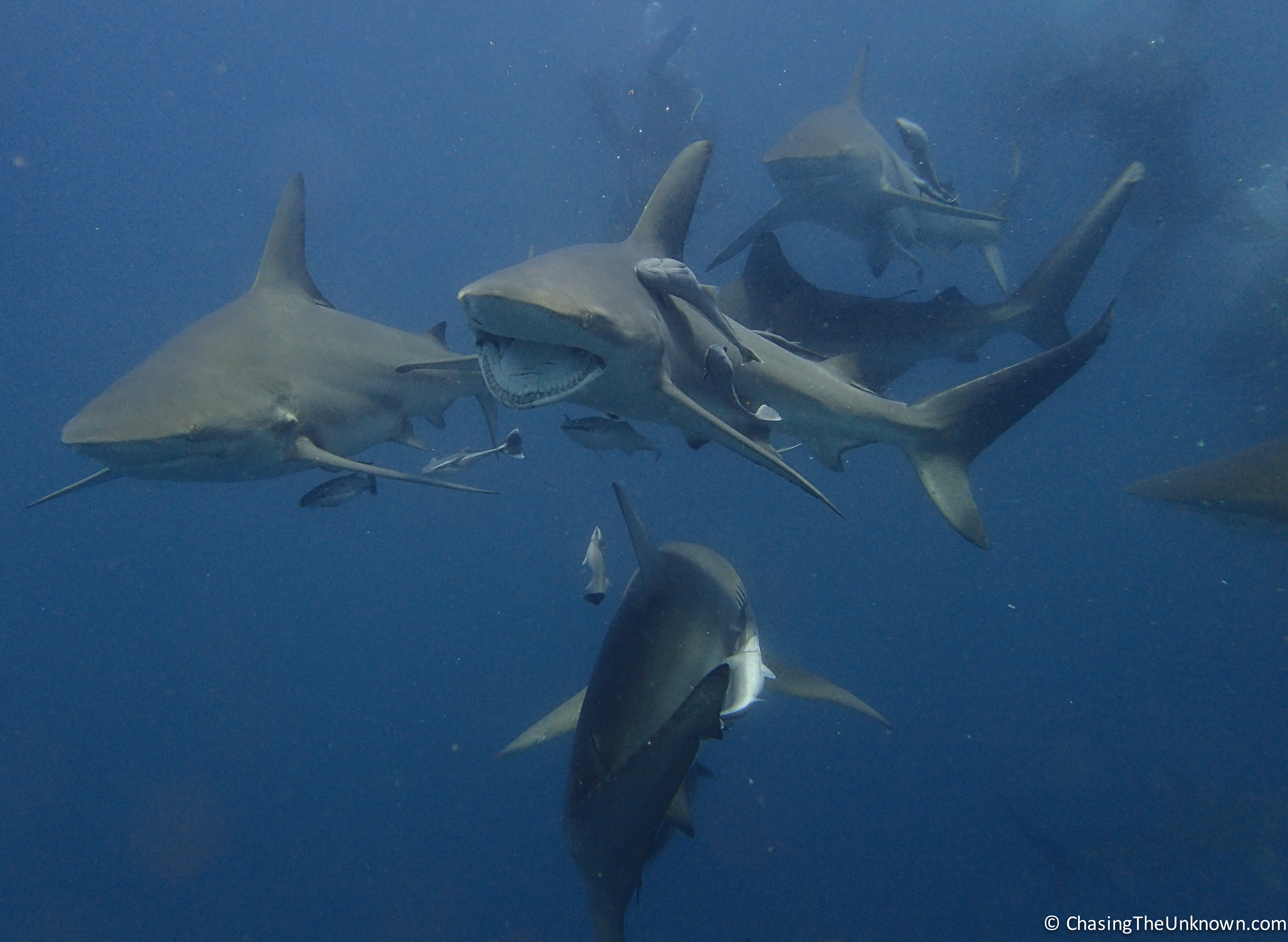 Writing diving posts isn’t easy. I basically want to put up a bunch of pictures, knowing some of them aren’t very good but hoping that they’ll give you an idea of what the diving is like. There’s only so much I can write about my love of being underwater or why that is. While I’d love to provide some thoughtful remarks on the diving experiences I had, this blog is really far behind and when diving is good but not mind-blowing, my memories begin to melt together. So, with a few intervals of text to explain where I was, why I saw so many sharks on one dive, and maybe rant a bit, here are some underwater photos from my time diving in South Africa.

My first diving stop was in Sodwana Bay on the Indian Ocean, just south of Mozambique. The water was a consistent 23C/73F during my dives at the end of November and wind conditions meant we were limited to 2 Mile Reef. A shame as I’d have liked to reach 7 or 9 mile reefs but there isn’t much to do in Sodwana if you aren’t diving so I wasn’t too keen on waiting around for the wind to calm down. The reef was colorful and healthy with nudibranchs, morays, turtles (sorry, no good photos this time around, if you want some turtle shots, see here), scorpionfish, sharks, and numerous species of fish. My camera housing flooded on my first dive so I can now attest that the Olympus TG-4 truly is waterproof to at least 14 meters (it’s rated waterproof to 15). I kept my dive shallow and continued taking pictures the entire dive. After a thorough cleaning and a bit of silicone grease on the o-ring, the housing was back in order and I’ve since used it without problem. A reminder to triple-check for sand when closing up a camera housing anywhere near a beach!

About three weeks after leaving Sodwana, I made it to Umkomaas, jumping off point for Aliwal Shoal. It’s about 40 minutes south of Durban and, like so many dive areas in the world, there isn’t much to do in Umkomaas if you aren’t diving. During the winter months (June-August), Ragged-tooth sharks arrive in Aliwal Shoal to mate and stick around until November or so. They were gone when I arrived in mid-December but I saw plenty of their teeth in the sand. A major sardine run occurs nearby in the winter months when humpback whales also make their way north so although I expect the water is bitterly cold, it’s probably great diving. For me, though, it was some lovely reef dives in 23-24C/73-75F water plus one interesting shark dive.

Baited dives of any sort bother me and I agonized over whether to join one in Umkomaas. The concept is this: by putting people in the water with sharks feeding on dead fish, people will come to see and understand that these amazing predators are not out to hurt humans and that while we must treat them with respect, we need not fear them or go on shark-killing sprees. Cage diving ostensibly has the same educational purpose. In both cases, there’s also the adrenaline rush and our human desire to see and do cool shit.

I’m all for education but I’m not a fan of human behavior altering that of wild animals. Here’s how a baited dive works: dead bait fish are put into a barrel with a lid on it, the barrel is attached to a chain, one end of which remains on the boat. In some cases, a second barrel is attached at a different point on the chain, possibly containing stinkier dead fish. A divemaster jumps in the water and hangs out with the primary barrel at a fairly shallow depth. At Aliwal Shoal, this means around 8 meters/26 feet. The second barrel hangs somewhere between 10 and 12 meters /32-40 feet. Divers group together a safe distance from the shallower barrel, keeping as still as possible while hovering head up-feet down (like standing). Cameras are to be held close to the body, not extended out by arms or poles. The sharks are attracted by the smell of dead fish so when they turn up, the divemaster reaches into the barrel with her gloved hand and pulls out a fish then “throws” it away from herself and a shark snatches it up. At times, the divermaster drops down to the deeper barrel and gives it a good shake or takes out a fish in an attempt to lure in more sharks. Dozens of sharks swim around the divers, checking them out and circling back in hopes of a feed. This goes on for a while. There are other ways to bring bait down such as small cages, nets, etc. and it can be hand-held instead of in a bucket or drum. Depth also varies by location and the sharks one is trying to attract. Whatever the logistics, the concept is the same.

I love and respect sharks. They’re beautiful, strong, bad-ass predators. I hope to never forget the dives when I’ve seen hammerheads, thresher sharks, or the time a silver tip shark and I stared at each other at close range. Seeing these animals in their natural habitat, behaving normally, is awesome in the truest meaning of that word. But those silver tips I saw in Rangiroa may not have been behaving naturally. Their appearance may be the result of baited dives having been done in years past. I’m not an expert in shark behavior and everything I’m writing here is my personal opinion and experience so it’s all open to debate. Disclaimer made, this is where my reluctance comes in. Until the early 2000s, divemasters on Rangiroa in French Polynesia did baited dives at Avatoru Pass to bring in silver tip sharks. After years of doing so, the sharks began to associate the sound of approaching boat engines with being fed so they started to gather below dive boats before the divers were even in the water. This same thing appears to be happening at Aliwal Shoal these days. According to people I spoke with in Rangiroa, dive centers there stopped baiting the sharks around 2004-05 (exceptions made for photographers, researchers, and the like). But in 2014, the sharks were still drawn to the sound of our dive boat. How much time must elapse before the sharks are no longer drawn to the sounds? What will happen if the fish population is so dramatically decreased (global warming, commercial fishing, etc.) that sharks have an insufficient food supply when a boat putters up to a few hungry sharks? What if the people on that boat don’t realize they’re in an area where dive boats once fed sharks? Could it lead to the unnecessary killing of sharks? To the death of people panicking and not behaving sensibly? I have no idea what would actually happen in that scenario; maybe everything would be perfectly fine. But altering the behavior of apex predators in the wild ocean for the amusement and “education” of human beings just doesn’t sit well with me. And yet I couldn’t resist the chance to be surrounded by Oceanic Blacktip Sharks. So I did the dive and have a new set of shark memories to add to my collection.

As predicted, dozens of female blacktips (typical size is about 1.5m/5ft but they can grow closer to 3m/9ft) came by and although it was too far off for me to capture on camera, a large tiger shark took a few passes by the deeper drum. The blacktips bumped into me a few times, checking out my bright yellow fins. The strength and power of these fish was made crystal clear to me in those moments. I am no match for a shark and when I’m in the water, I’m in their territory. But being knocked about a bit is nothing compared to what happened to the divemaster. She’s fine and this sort of experience is actually perfect for educating people that sharks really don’t want to eat us.

As mentioned above, the divemaster wore gloves and repeatedly reached into the barrel of dead fish to distribute the bait. Naturally, her glove reeked of decaying fish. Not long into our dive a hungry shark was attracted to the scent and wrapped its mouth around her arm to find out if it was edible. The divemaster held her position, locked eyes with the shark, tried to convey a “fuck off” attitude, and the shark let go, realizing that this wasn’t the meal she wanted. The shark swam off and the divemaster applied pressure to her wetsuit and glove-covered wrist with her other hand. In time she ascended for some first aid (we had a second local divemaster with us) and back on land got everything checked out and antibiotics to ward off infection. This sort of exploratory bite from an oceanic blacktip isn’t life-threatening but were that to happen with a bull, tiger, or great white shark, the outcome could be very different. So what happens to the guy cleaning fish on his boat who unknowingly finds himself in an area where divers once baited sharks when he decides to go for a swim? Maybe sharks would be in that area even if baiting had never occurred but maybe they’re drawn to the sound of his motor because that once meant an easy meal.

While diving at Aliwal and in Sodwana won’t make my list of favorite dive spots in the world, I’d happily return to either place, ideally when the Raggies are in town or the Sardine Run is in full swing. Although I won’t start working to end the practice of baited shark diving, I don’t think I’ll support that side of the dive industry again. I’d rather take my chances with seeing sharks naturally, even if that means I never see a great white.