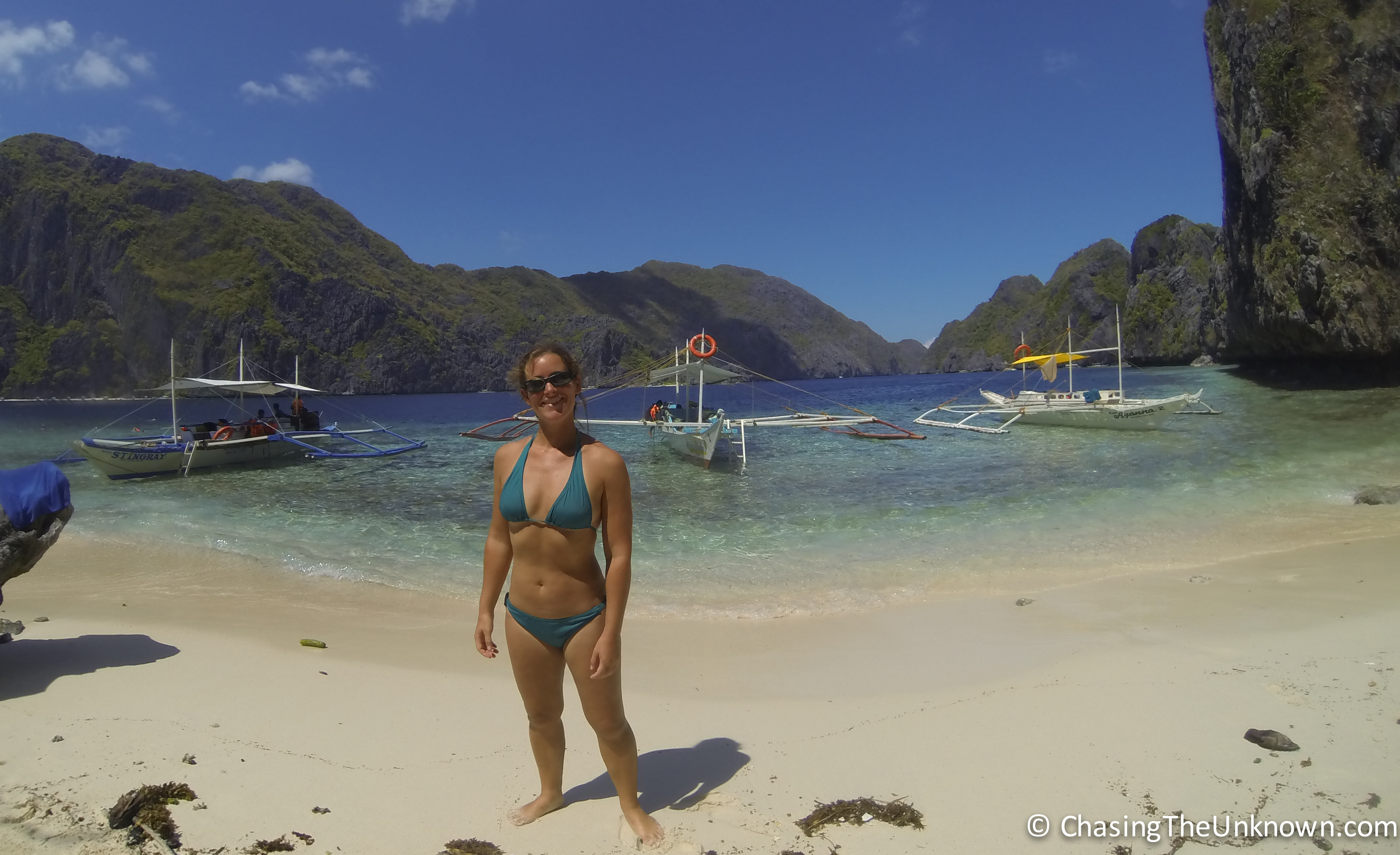 The Bacuit Archipelago is considered one of the highlights of any visit to the Philippines: limestone cliffs jutting out of the sea as in HaLong Bay but without much litter and with great snorkeling. El Nido, at the northern end of Palawan, is the best base for exploring the area and the tour industry is booming.

There are four standard island hopping tours with tours A and C reputed to be the best. I started with Tour C, planning to take Tour A the following day but after the crowds of Tour C, I decided instead to spend the day relaxing on the beach commonly known as Los Cabanas – so-called because of the resort by that name. And for me, that was the better choice. But it’s not very interesting to write about so I’ll focus on the tour instead.


Tour C stops first at Helicopter Island – where boats line up along the beach like cars in front of a convenience store and tourists hop off to snorkel in the strong current. Unlike cars, boats routinely run into one another, here and at most stops on Tour C. With the strong surge, at least one person on my tour was thrown against the rocks while snorkeling and lost a bit of skin but was otherwise unharmed. Visibility wasn’t the greatest and with the high number of people in the water, I quickly gave up to walk along the beach. I was relieved when we were called back to the boat to move on. Tour C is supposed to have two highlights: Secret Beach and Hidden Beach. Sadly, we were informed only after our boat left shore that we couldn’t stop at Hidden Beach because a television show was filming there. Secret Beach, however, was good fun.


When our boat arrived outside Secret Beach, there were multiple other tour groups hanging around. People bobbed about in life jackets, many of them obviously not comfortable in the water. Filipino tour guides and boat staff literally pulled people around with various flotation devices or simply by grabbing their limbs. Our guide sensibly let us dawdle a bit before we jumped in, allowing the crowd to thin. The swim in to Secret Beach was easy as the current was in our favor and I drifted right in. For those who weren’t strong swimmers, didn’t have fins, or couldn’t swim and were nearly swallowed up by their life jackets, guides pulled them through. Don’t get me started on this third category, let’s just say it amazes me how many people visit or live in the Philippines – a nation of 7,107 islands – who have no idea how to swim. But I digress. For me, swimming in was fun. The exit, however, was a different story.


With the current working against us, we were told to move fast when we heard the word “go.” This meant five or six of us lined up at a time, balancing on a ledge in a few inches of water, waiting to slide in and take off through the narrow hole in the cliff. I gratefully took the hand of our guide at one point and allowed him to steer me away from a sharp edge and into the open water. Where I promptly stared into a curtain of jellyfish. Fighting the current I swam hard back to the boat and managed to escape unscathed. How, I’m not sure, but I’m not questioning my good fortune.


Tour C also stops at Matinloc Island with its shrine built by a German to hide his illicit oil drill. The church and basic accommodation were abandoned when the government cottoned on to what he was doing and he’s been in the wind for more than ten years now. It’s an odd story but the island is worth a stop, for the view above if no other reason.


El Nido itself is overcrowded and loud. One traveler I know commented that it’s a bit like Thailand done poorly. What he meant was that the streets are too narrow for the tricycles used to get around so walking is a constant game of chicken; shops are trying to sell t-shirts, swim wear, and souvenirs that aren’t quite up to standard for most Western tourists; there are more tour operators than any town should have offering the same tour with only subtle differences in food quality; and the restaurants haven’t figured out what hours to open and what to serve – many trying to serve too many types of food to be good at any of them. White wine is served warm and red wine cold. There’s no ATM and credit card fees are outrageous so one must arrive with enough cash to cover expenses. I think El Nido has received such an abundance of tourists in recent years that the residents are still adapting. Hopefully in time tour companies will better coordinate to minimize the number of boats at each tour stop at a given time while shops and restaurants continue to improve their offerings. I’ll still take just about anywhere in the Philippines over Thailand but after the serenity of Port Barton, El Nido was a shock.


It’s beautiful, there’s no question about that. And like everywhere I’ve been – even the places I haven’t loved – I’m glad I went to El Nido. But with so many other beautiful places to go in this world, I wouldn’t return.