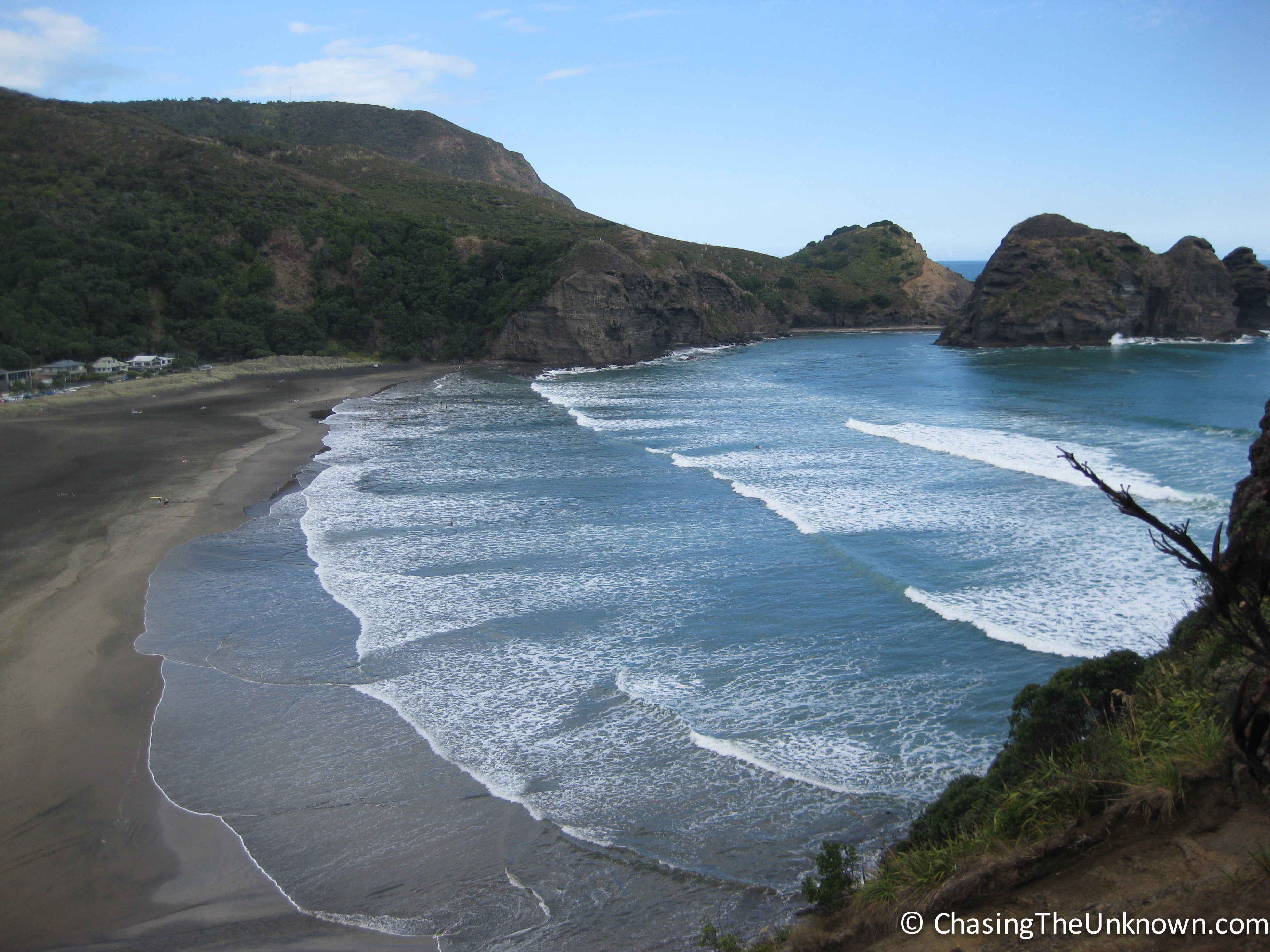 There were a number of places we went, things we did and saw in New Zealand that haven’t made it to the blog. If we’d had regular access to good WiFi during the months that we’ve been traveling, a number of mini-posts would have been published covering these experiences. But the opposite has been the case: WiFi has been expensive, slow, and sometimes hard to find. So we’ve decided to wrap up our New Zealand coverage by condensing those bits and pieces and rolling them into this post.

In September, 2010 and February, 2011, Christchurch suffered two major earthquakes, the combined damage having destroyed much of the city. Instead of Victorian architecture to admire, there are torn up streets, boarded-up buildings, and a few renovation projects underway. The city is a shadow of its former self and rebuilding is slow. The ever-practical Kiwis, in order to return a bit of commerce to the once-flourishing business district, have started businesses in shipping containers. Our first meal in New Zealand was at one of these: we ordered food inside then traipsed upstairs to sit atop the container and await the arrival of our lunch. A number of shops and restaurants, a few banks, and even a post office are located inside these makeshift buildings. A simple idea, well-executed: a testament to Kiwi sensibility and efficiency. 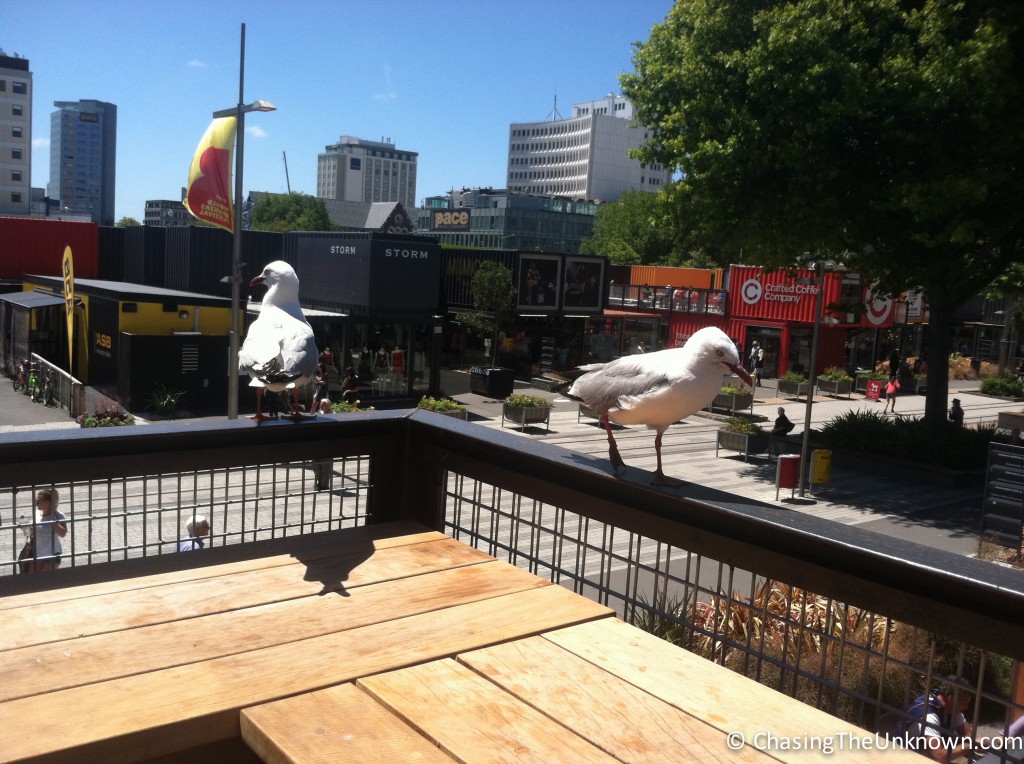 Across the Southern swath of the South Island are the Catlins: a region teeming with wildlife and rugged coastline. Spotting fur seals, sea lions, and penguins is relatively easy and there’s a good area for swimming with dolphins if you don’t mind the cold water. Our time here was brief but included a windy walk to the Nugget Point Lighthouse where we watched seals playing on the rocks below and gaped at the views. If you find yourself in this area, the long drive on a dirt road and subsequent walk along a cliff is well worth it. 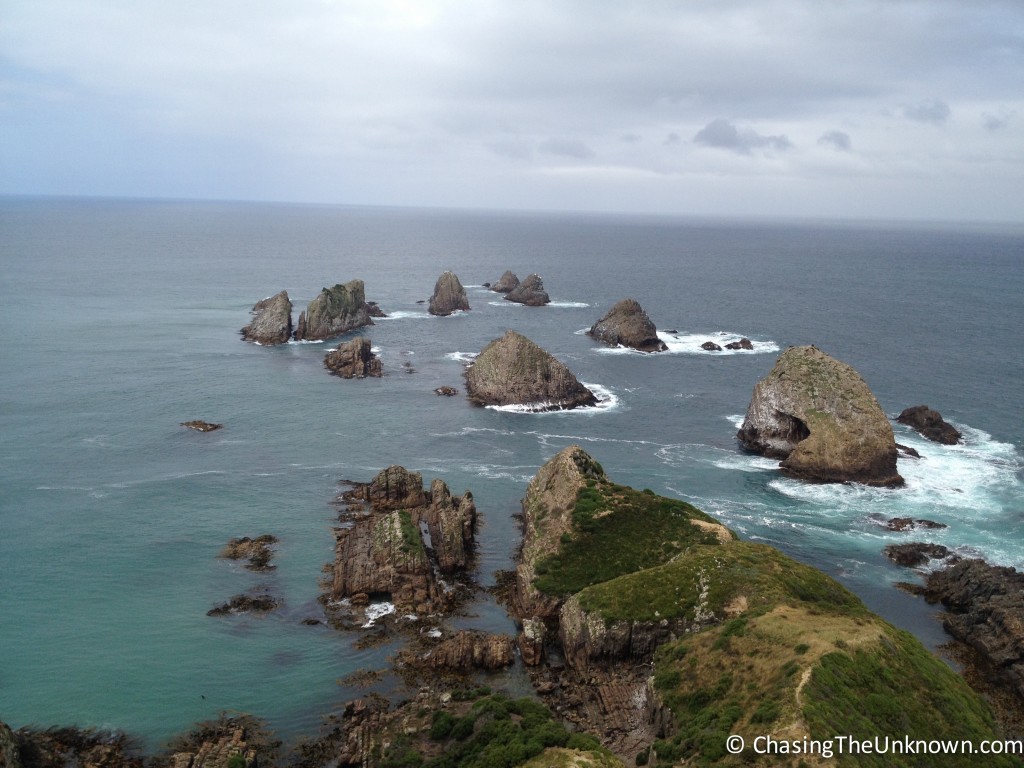 Driving up the west coast of the South Island is a generally solitary event: a few cars, a handful of campers, and the occasional bus are often the only other vehicles one encounters on a major highway in a given day. But a few spots are teeming with tourists and Punakaiki is one of them. These ancient rock structures are slowly changing, eroded by water and wind but I expect they’ll remain a beautiful mystery long after people stop roaming the earth. Best seen at high tide, we were there about an hour after, when the water was still high and the “eruptions” breathtaking. 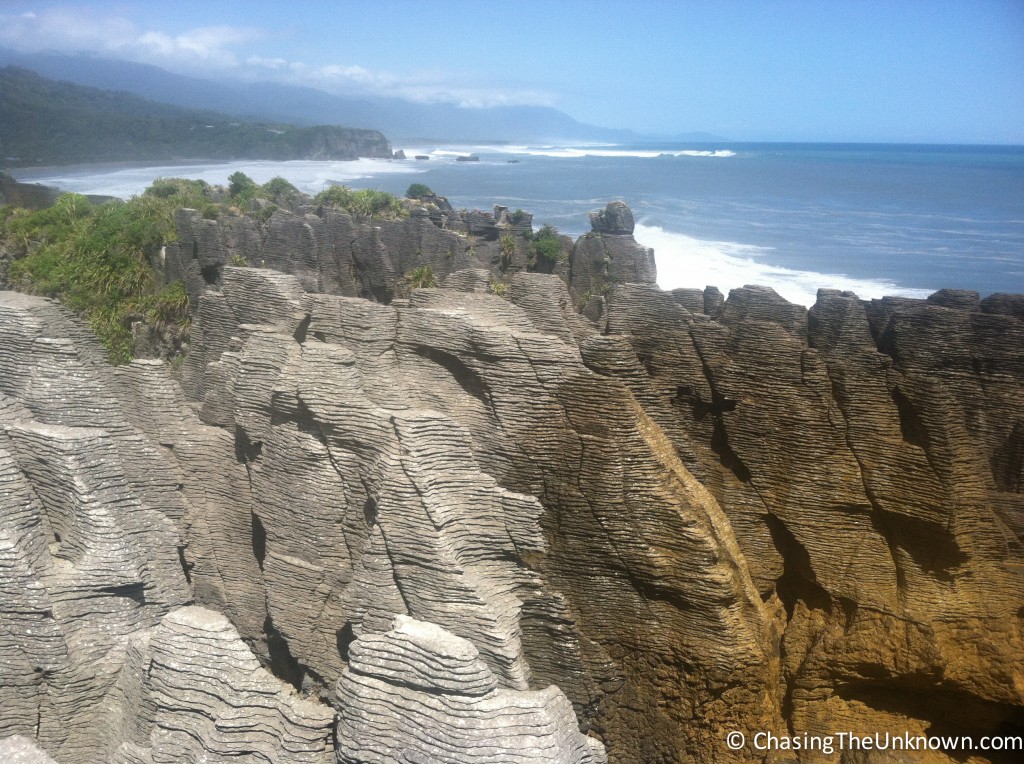 A trip to New Zealand isn’t complete without seeing a sheep-shearing. We caught one in Kaikoura with our Belgian friends. In the interest of brevity, I’ll let the photos do the talking. 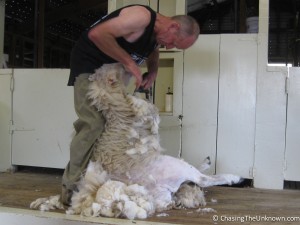 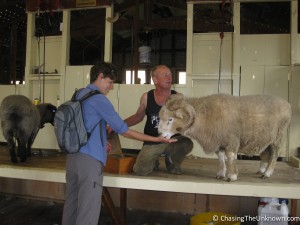 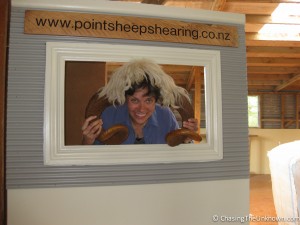 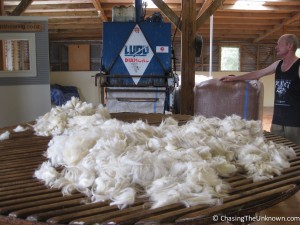 No, we did not set foot in any girly bars. But we did notice them in otherwise respectable areas of Nelson, Wellington, Auckland, and other towns of decent size. Perhaps because we’ve both been living in Puritan-settled Massachusetts for over a decade but we found the quantity and location of these establishments surprising. Prostitution is legal and regulated in New Zealand so I can’t help wondering how many of these strip clubs are also brothels. 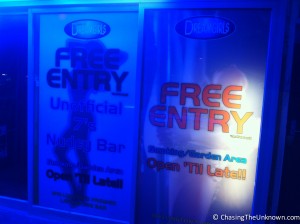 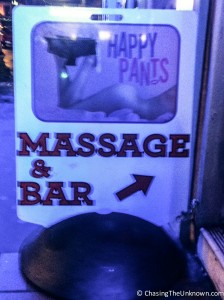 If you only go to one museum in New Zealand, make it Te Papa in Wellington. This museum in the nation’s capital is free, well-designed, and packed with excellent exhibits. We spent a day at Te Papa and could easily have spent another. The collection includes Maori and South Pacific treasures, a colossal squid, an earthquake aftershock simulator, a complete Marae, videos of incredible underwater footage including that of a ghost shark, and so much more.

Sunrise on the East Cape

The East Cape Lighthouse is the first lighthouse in the world to greet the sun every day. Accessing it requires driving about 22km along a narrow unpaved road then climbing a hill. If you want to watch the sunrise, it’s not a particularly enjoyable hike in the dark, especially if it’s raining. We persevered and when the rain let up for a few minutes, we reveled in being among the first people on the planet to see the sun rise that day. 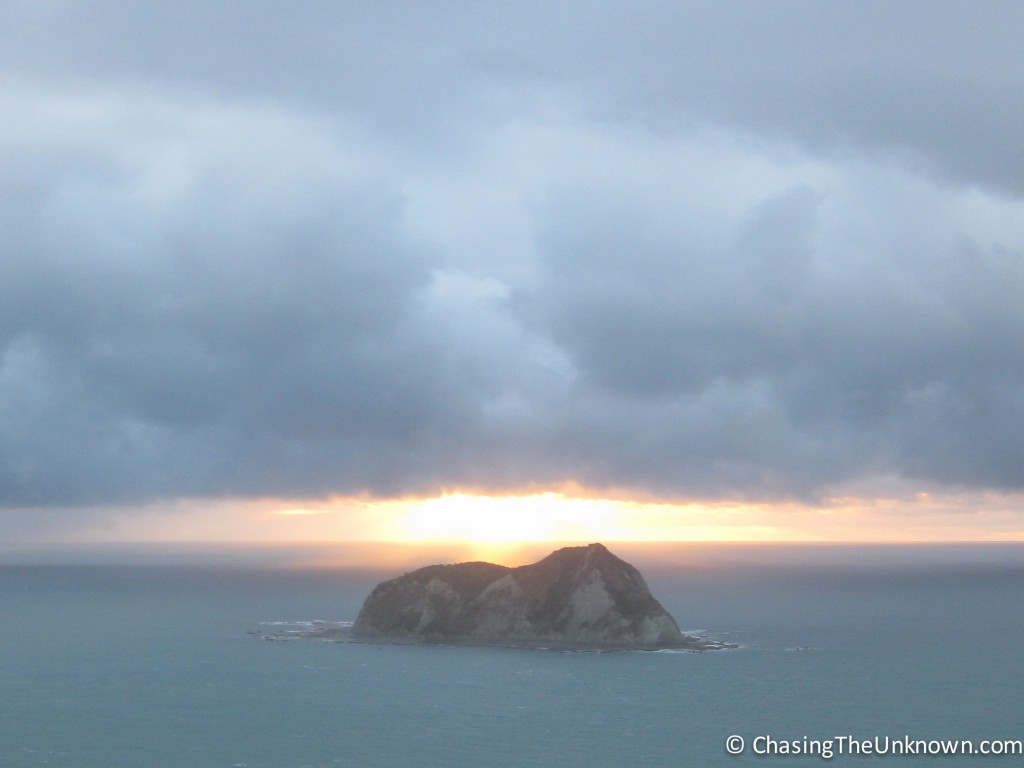 Longest Place Name in the World

Taumatawhakatangihangakoauauotamateaturipukakapikimaungahoronukupokaiwhenuakitanatahu translates, loosely, as the hilltop where Tamatea with big knees, conqueror of mountains, eater of land, traveller over land and sea, played his koauau to his beloved. We drove more than an hour out of our way to see this place and, because we got to drive through a herd of sheep on the way and the scenery was lovely, we enjoyed our detour. Ultimately, there isn’t much to see other than this sign. 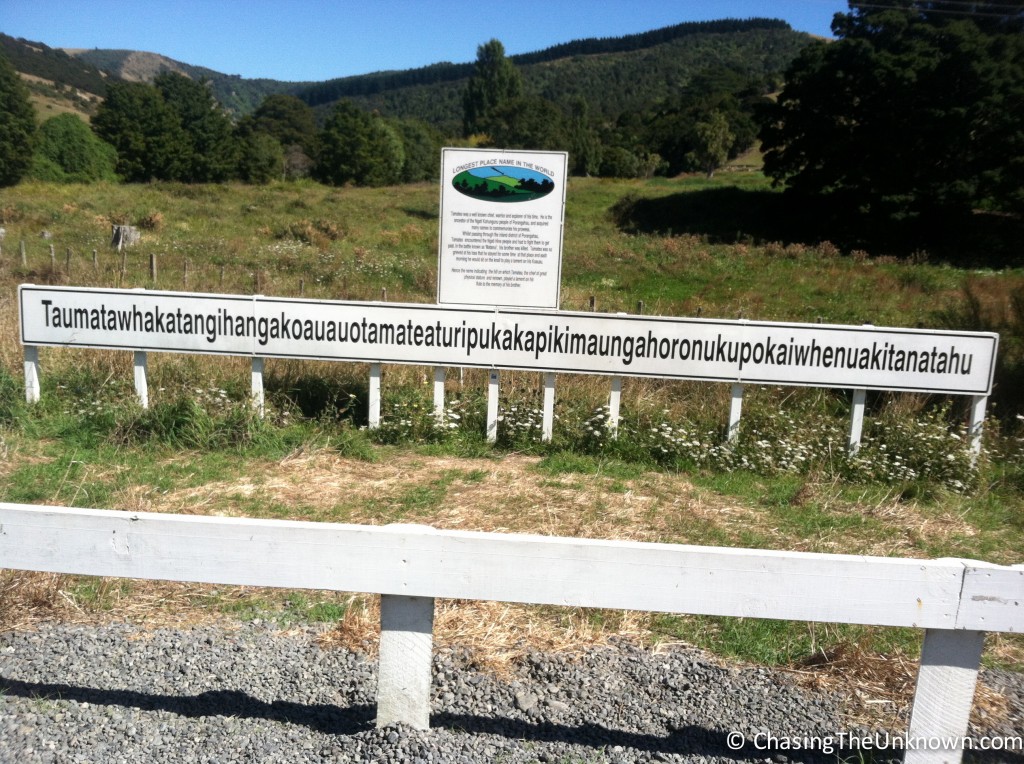 On the road between Rotorua and Taupo is an easy one-hour walk past the Huka Falls to the natural “Spa Park.” The Waikato River, fed by glacial lakes, flows over the Huka Falls at the forceful rate of 220,000 liters per second. But before reaching the falls, the river flows beside volcanic hot springs. A hot waterfall pouring into the cold river makes for a unique experience. I sat on the rocks, my knees and thighs burning while my feet and calves were comfortably cold. Jen enjoyed the hot waterfall for a while. Within a tiny area, you can find both all-hot and all-cold places to sit and multiple spots where the hot flows over the cold. 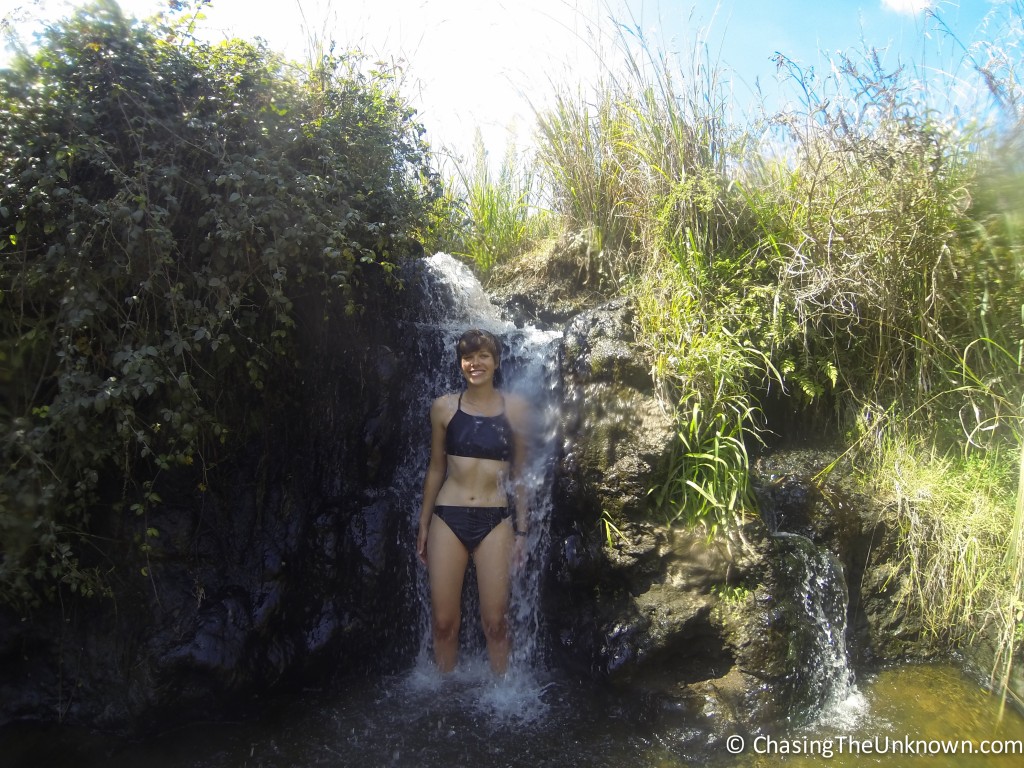 Known as Hot Water Beach, this patch of coast on the Coromandel Peninsula sits above heated rocks and water left behind by ancient volcanic activity. At low tide, you can dig a hole in the sand and, if the water is calm enough, take a seat in your own hot pool a few feet from the ocean. Cyclone Lusi had just left the area when we stopped here so even at low tide, the ocean was high and very active. The best we could manage was to get our feet nice and toasty before waves filled our hastily-dug holes in the sand. Given how hot the water is, I was actually ok with that. 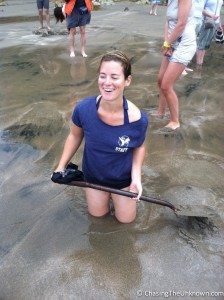 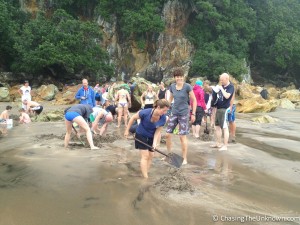 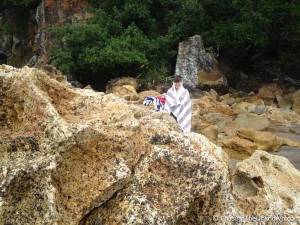 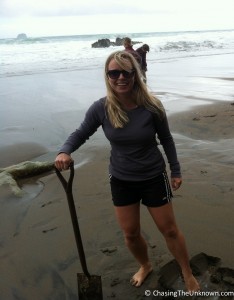 The town of Kawakawa has the most famous toilets in New Zealand: written about in nearly every guidebook, map, and tourist pamphlet that covers the Bay of Islands. The toilets were designed by Friedensreich Hundertwasser, an Austrian architect and ecologist who spent his last 25 years on a farm near Kawakawa. Given the hype the toilets have received, I hoped for something more but appreciate that for public toilets in the center of a town, these are unique. 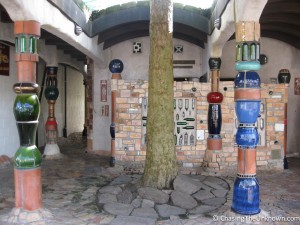 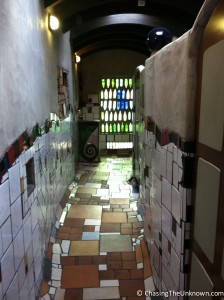 Along the western coast of Northland is Waipoua Forest, home to massive kauri trees. The oldest one is estimated to be more than 2000 years old and over 51 meters high. Many of these giants were cut down by the British for ship-building during the 19th century but the Department of Conservation is doing its best to preserve those still standing and to encourage growth in the forests. 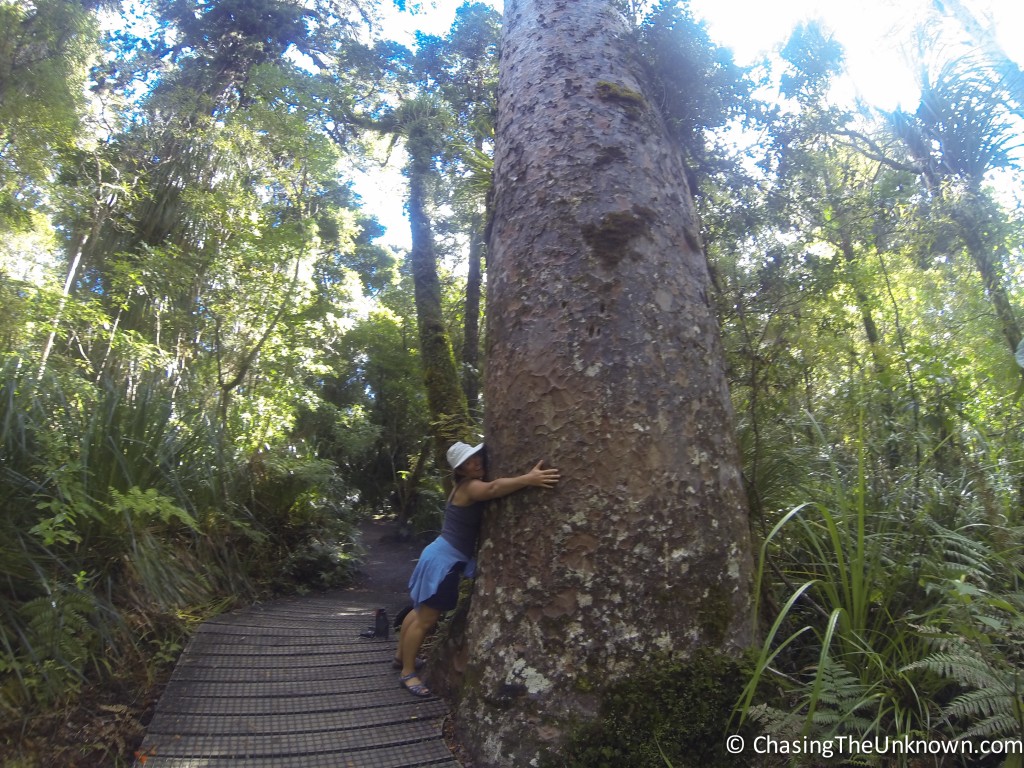 The Pacific Ocean and the Tasman Sea meet at the northern tip of New Zealand, a sacred place in Maori legend. The meeting of the waters represents the coming together of male and female: the creation of life. And a spit of land nearby is where the spirits of the dead are believed to return to the earth. The waters were calm the evening we stopped by but watching waves travel not to shore but toward oncoming waves, even small ones, was a sight worth seeing. Our photos don’t do it justice so you may just have to trust us. 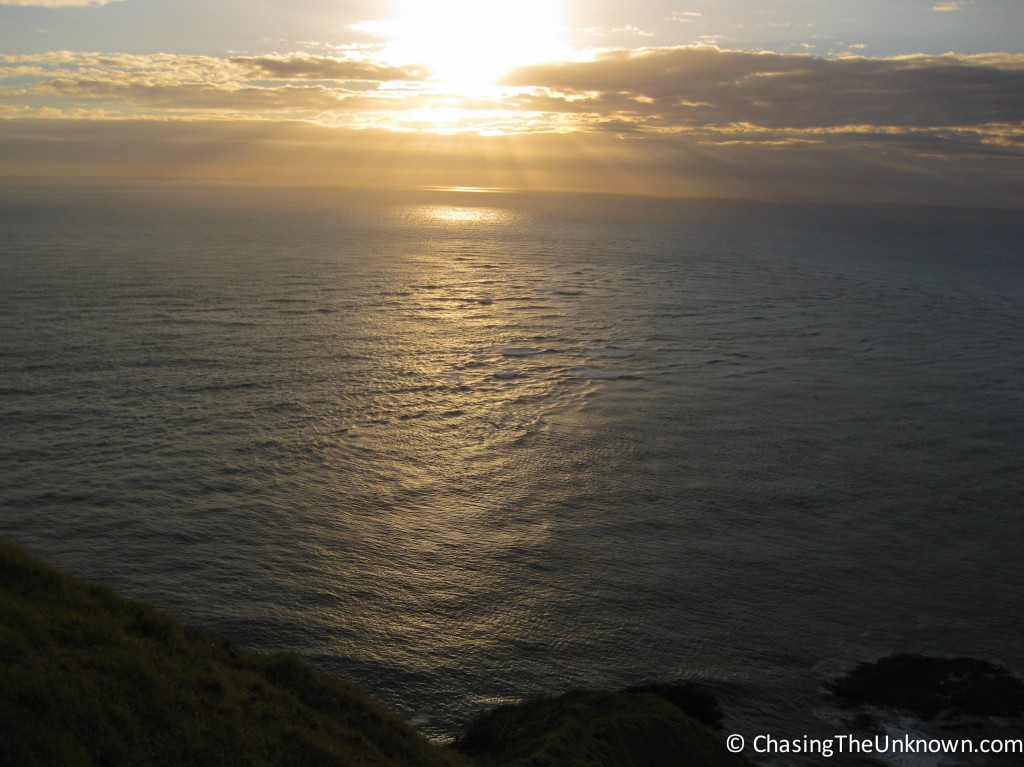 The black sand beach of Piha contrasts dramatically with the bright blue sky and breaking waves of the Tasman Sea. Remains of volcanic rock: red, black, grey, and brown dot the beach and when clouds overtake the sun, it feels a tad post-apocalyptic. Which doesn’t make it any less beautiful. The top of Lion Rock is inaccessible but a footpath goes most of the way up. No one but us climbed the afternoon we visited and, like Cape Reinga, I understand why this place is sacred to the Maori. A stillness permeates the air and a sense of calm washed over me as I sat, feeling connected to the earth and the world around me. 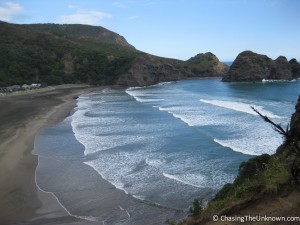 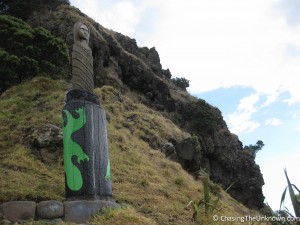 Our time in New Zealand was full of so much more than we’ve covered on this blog and generated memories we’ll hold on to for years. To those of you who have followed our trip thus far, thanks for sticking with us and being patient as we figure out how to make this blog work. Next up, French Polynesia!