Getting to and from Port Barton on the island of Palawan requires time on a terrible road or forking over a fair amount of cash for a boat. The road into town is under construction and will, almost certainly, increase tourist numbers when complete. But for now, Port Barton is a tranquil respite from the crowds of Puerto Princesa’s Underground River and El Nido. For me, it was nothing short of paradise. 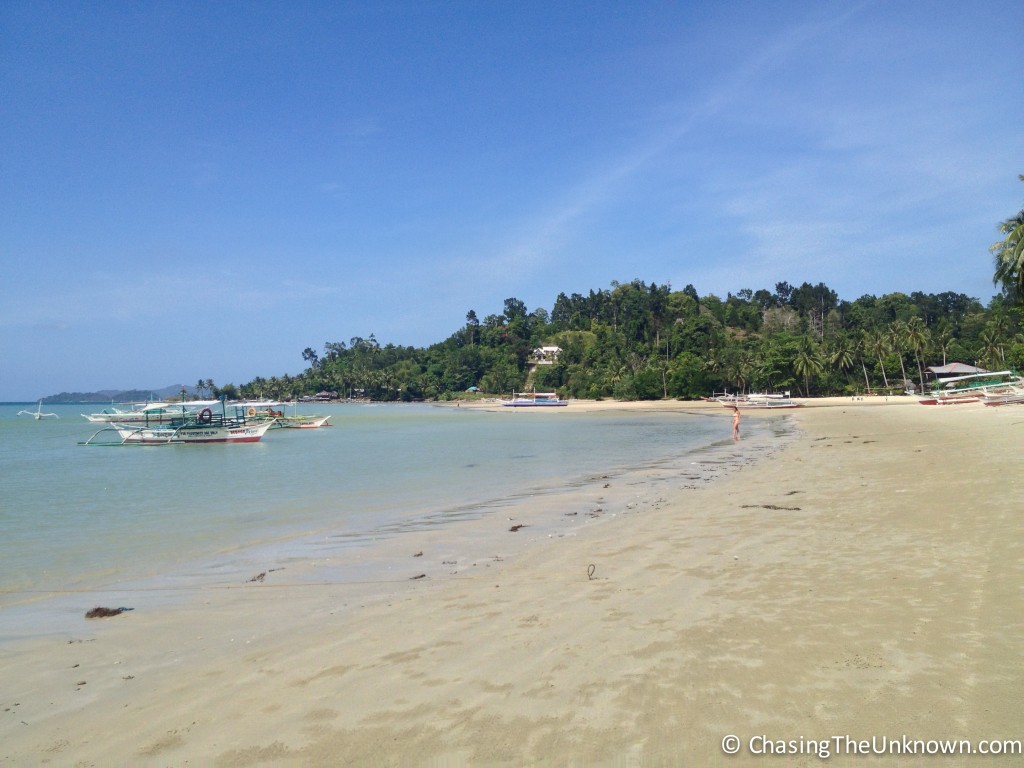 A stretch of beach meets clear water (apparently jellyfish can be a problem but I didn’t see any right off shore when I went for a dip) and the town is easily walkable. Guesthouses and restaurants line the beach and even though most guesthouses were fully booked when I was there, it never felt crowded. Island hopping tours are more reasonably priced and far less busy than in tourist-heavy El Nido. In Port Barton, I paid only 500 Pesos (around $11.25) for a full day of snorkeling, island relaxing, and lunch on a beach. There were only four of us on the boat I joined and although we shared the first snorkeling stop and our lunch spot with other groups, it wasn’t overwhelmingly crowded. In El Nido, I paid more than double that to be herded around with twelve others on a boat that literally bumped into other tour boats everywhere we went.

Food in the Philippines is tough for a vegetarian – or anyone who doesn’t eat pork – if you want to eat local food. Western food options are plentiful but often overly sweet and the bread is typical of SE Asia: sweet and spongy. But in Port Barton, multiple guesthouses and restaurants make their own bread. As far as I’m concerned, it doesn’t get much better than that. In addition, I found an excellent chocolate mango pancake, fresh hummus, and plenty of local veggie dishes made without pork.


The snorkeling is decent although too much of the coral is damaged or dead to make it all that exciting. I had a cold, couldn’t equalize, and skipped the diving so I have no idea if it’s any good. If it is, then this place truly is paradise. I also didn’t make it to a waterfall as I spent time resting in order to keep my cold in check so I could dive in the days ahead. As I’ll get around to in a future post, that was a wise decision: diving in Coron was nothing short of amazing.

Port Barton is a lazy place, the kind where it’s easy to find days have slipped by without having done much. Town electricity is turned on between 6 and 11pm although many places have generators they run for a few hours during the day. Regardless, getting a cold beer isn’t a problem, even when island hopping where enterprising locals pull up with a cooler full of ice cold drinks. With friendly, relaxed people, great food, and the calm of a remote location, Port Barton is the closest place I’ve found to paradise.

The question is, when I return to the Philippines someday, do I return to Port Barton or leave the memory intact?