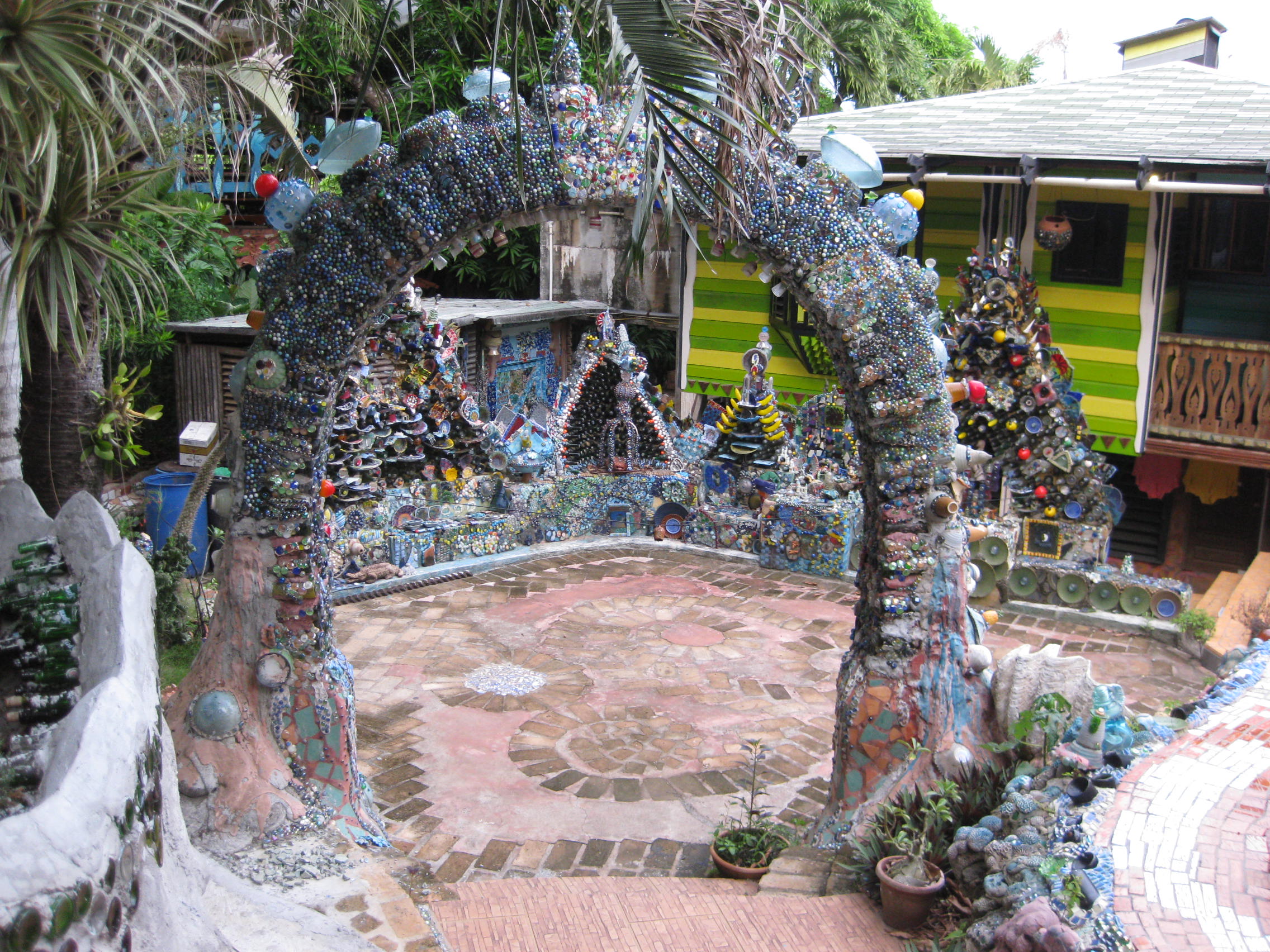 We stepped to the side of the road, waiting for yet another motor scooter to pass and realized we were outside the Utila Art Center. This beautiful building has intrigued us since walking past it on our first day here. The wood façade, tiled terrace, and sheer size of the building are unique on this part of the island. Jen pulled out the camera and started looking for good angles to photograph it. 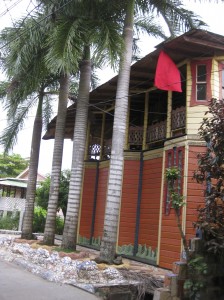 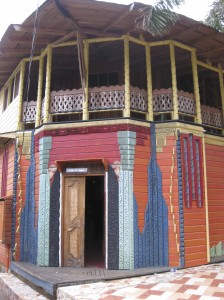 “Have you been here before?” The man on the motor scooter had stopped and it looked as though he wanted to turn down the alley we were standing in.

“We were just trying to let you pass.” Jen smiled and stepped back from the alley but then he shut off his motor and dismounted.

“Is this place yours?”

We trailed behind him, ogling the intricate woodwork and navigating the palm-frond sculptures. Before we could start asking questions, the owner asked if we wanted to see the view from the roof. Not ones to miss an opportunity, we eagerly climbed the stairs from one floor to the next until we got to a narrow ladder that spat us out on the roof, high above Utila Town.

“I don’t have a ladder so be careful and come back down this way.” She demonstrated backing down the interior ladder and we thanked her profusely as she went back inside. We had a wonderful moment taking in the panorama of Utila’s busiest area.

In the U.S. this would never have happened. There were no handrails, no safety precautions. We were two foreigners left alone on a bumpy roof with the wind whipping past us. It was a wonderful moment, surveying the town and the sea, peacefully enjoying each other’s company. Inside again, we chatted briefly and she invited us to return another day to sit in the little library. Leaving many questions unasked, we left her talking with her husband, whom she obviously hadn’t seen all day.

Buoyed by this unexpected friendliness, we continued our late afternoon stroll, poking our heads into the Jade Seahorse (also known as Treetanic), probably the most well-known structure on the island (one traveler claims it’s the best bar in Central America). The vegetarian restaurant is re-opening sometime around now as Jack, its chef, has returned from the States and the bar is a late-night hangout so we took a chance that we’d be able to explore. A young American-sounding guy was leaving as we walked in and suggested we turn to the right and feel free to explore. Treetanic is built around mango trees, allegedly in the shape of a ship but I couldn’t see that from anywhere we stood. The decor is impressive but words can’t do it justice. 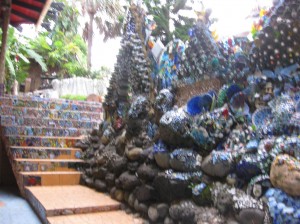 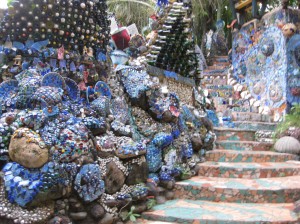 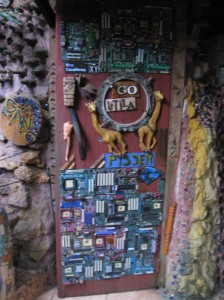 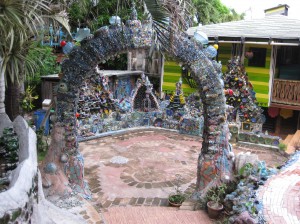 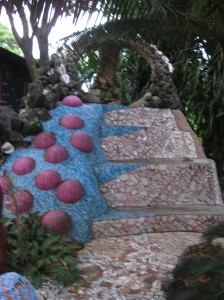 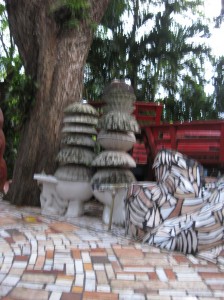 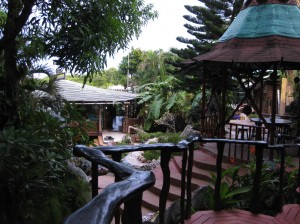 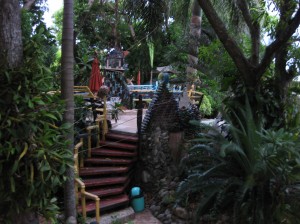 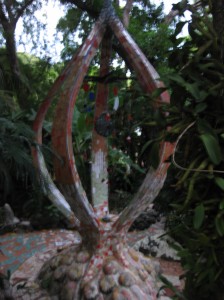 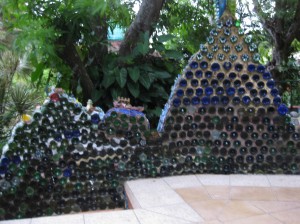 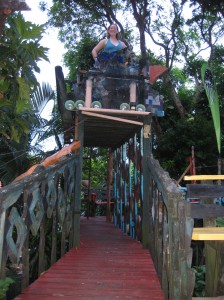 Unsure where to go amidst the maze of narrow stairs and walkways on our way out, we wandered about until a tall thin man with an air of mental illness or drug dependence started mumbling at us.

“You can go anywhere. Just not here.” At least I think that’s what he said.

“Oh, sorry.” We both turned and tried to find an appropriate path.

“Do you want to be punished?” He leered at Jen and a general sense of unease washed over me.

“No.” At least Jen had the peace of mind to respond. I was trying to high-tail it out of there but was oddly paralyzed.

“Then you aren’t sorry. Have you seen this? Did you a take a picture of it?” He pointed at a mosaic of a woman, his voice so low we had to strain to understand him.

“No.” I finally spoke up. I had no camera with me, anyway.

“Well don’t bother.” I could feel his beady eyes boring into my back as we skittered away, finally retreating to the safety of the street.

The Honduran woman had welcomed us in to her sanctuary, allowed us to explore, trusted us on her roof and made me want to return, eager to learn more about her art and the center’s mission. The American man had sent shivers down my spine and left me convinced I should never set foot at Treetanic again. The two encounters occurred within 20 minutes and 200 yards of one another but each space and its proprietor was from a different world.

Hours later, walking down Utila’s main street, the guy who ushered us in to Treetanic called out, asking about our exploration. It turns out that the creepy white guy is Bill, the current owner, and that his twisted sense of humor is a source of confusion for everyone who meets him. I’m trying to give him the benefit of the doubt but if he’s lurking when we check out the restaurant, I might not make it past the first round of drinks.