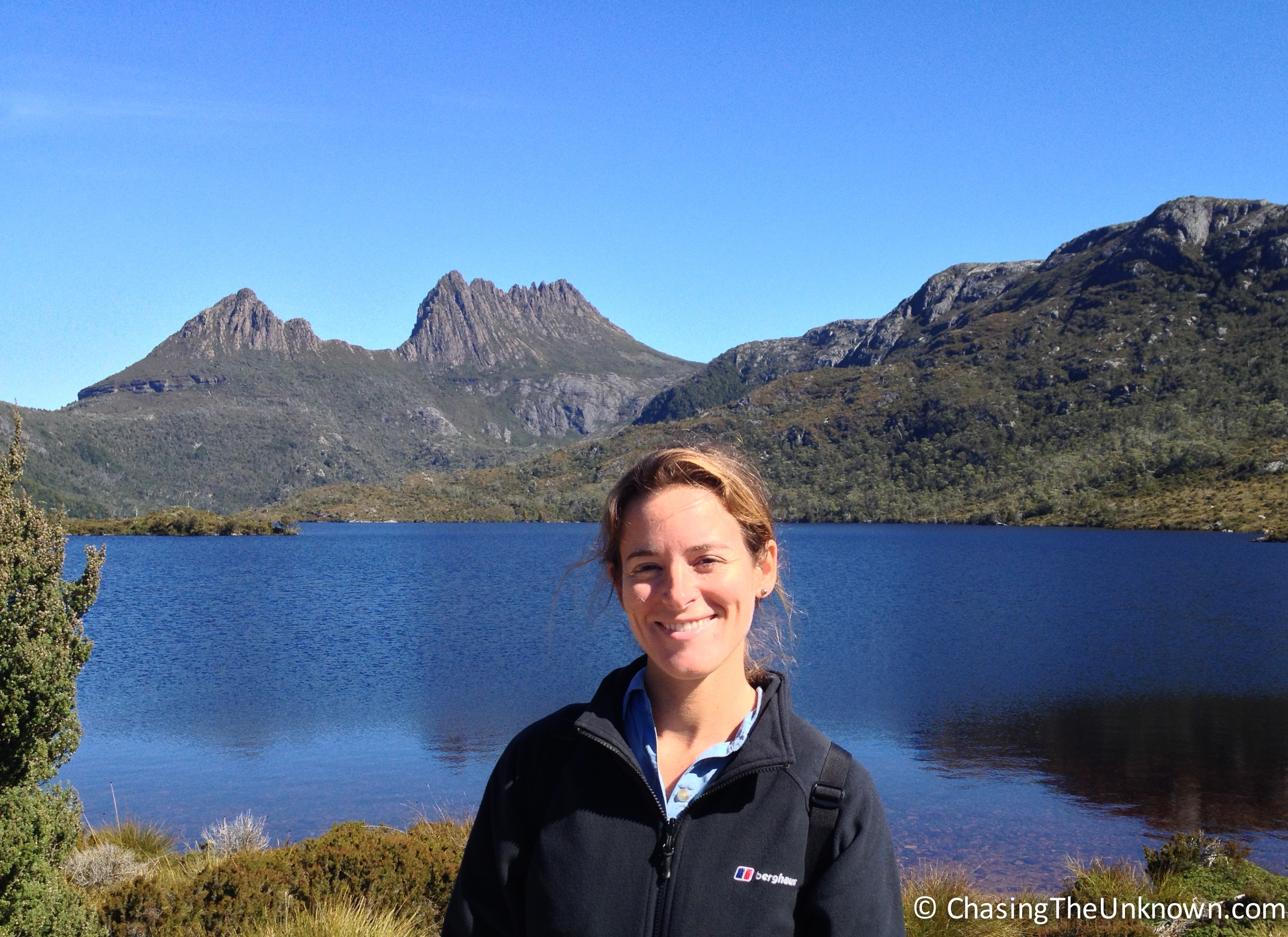 Tasmania has two well-known icons: the Tasmanian Devil and Cradle Mountain. I didn’t get to see the former, endangered nocturnal animals that they are, but I did make it to the latter. 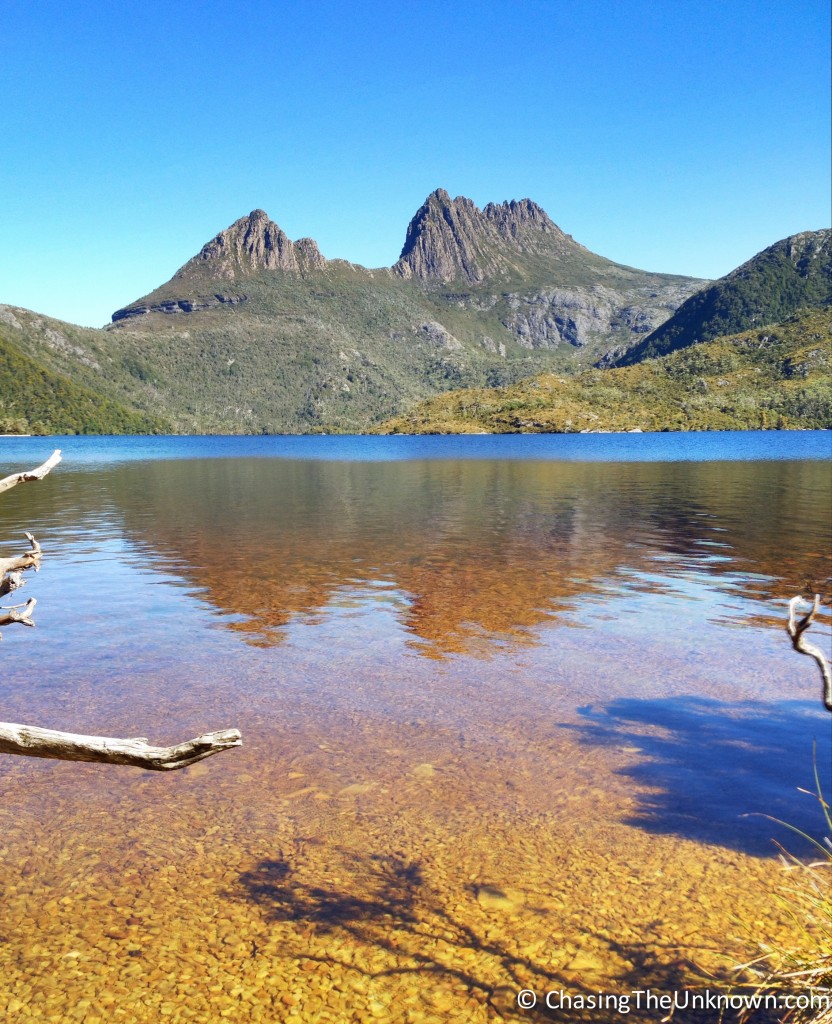 When I arrived in Cradle Valley the afternoon sun was shining and I happily set off around Dove Lake. An easy two hour walk with multiple stops for photos, admiring the view, and contemplating what I’d be doing the following day: hiking up to the summit. There are multiple paths leading to the Summit Track and I stopped to read each sign that provided estimated times or commentary about the paths, trying to decide on a plan. But mostly I basked in the beauty of this national park with its unique plants and allegedly abundant wildlife. No matter how patient I was and how many different paths I walked during my two days in Cradle Valley, I never saw a wombat, just plenty of square wombat turds. 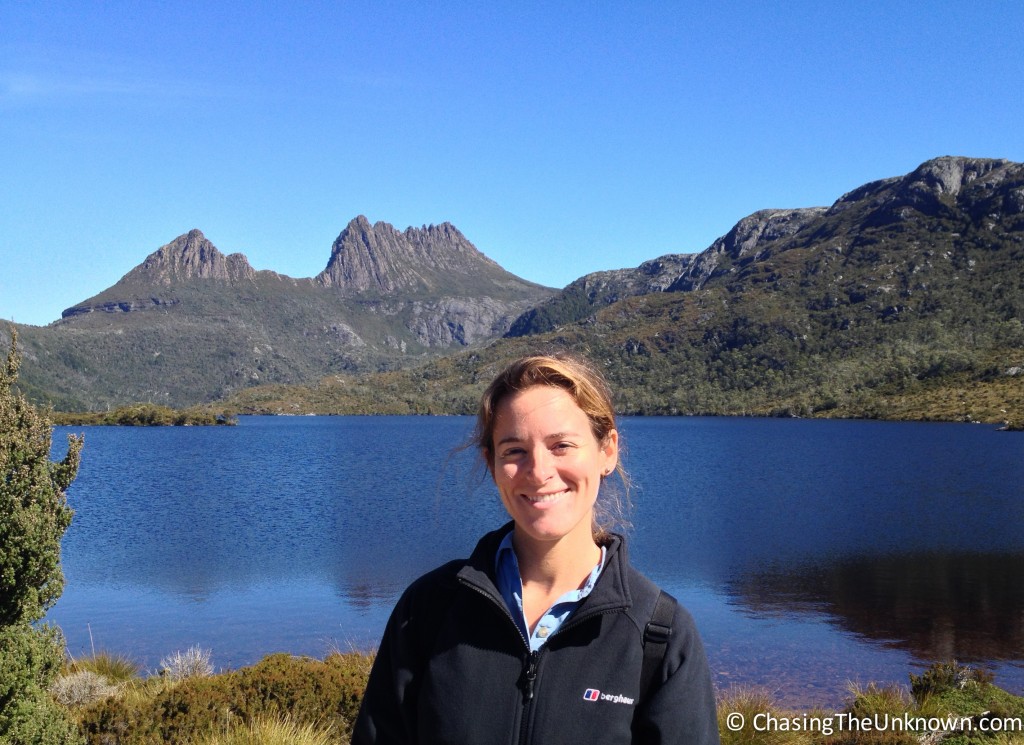 By the next morning, clouds had more than rolled in, they’d settled down for a morning of mist. When I arrived at the Dove Lake car park and looked up, I crossed my fingers that the wind would be strong enough to move the fog away but not so strong that it would knock me off the mountain. I’m told that on a clear day, a walk to the summit and back takes about six hours including breaks for lunch, photos, and generally enjoying the experience. The last bit is essentially bouldering, climbing around large rocks that can be dangerously slippery in rain or snow. Snow can hit any time, even at the start of autumn, as it is now.

I set out alone, taking an easy track past Lake Lilla, Wombat Pool, and Crater Lake en route to Marion’s Lookout. There, I met another solo hiker aiming to summit who had taken a shorter but more challenging path to that point. We chatted and fell into step as we resumed our hike. As the air chilled and the visibility worsened, I was relieved to have company, especially in the form of an experienced Aussie hiker who carries a personal locator beacon. We passed a hut used by many starting out on the Overland Track, a 6 day trek from Cradle Mountain to Lake St. Clair, and worked our way up to this: 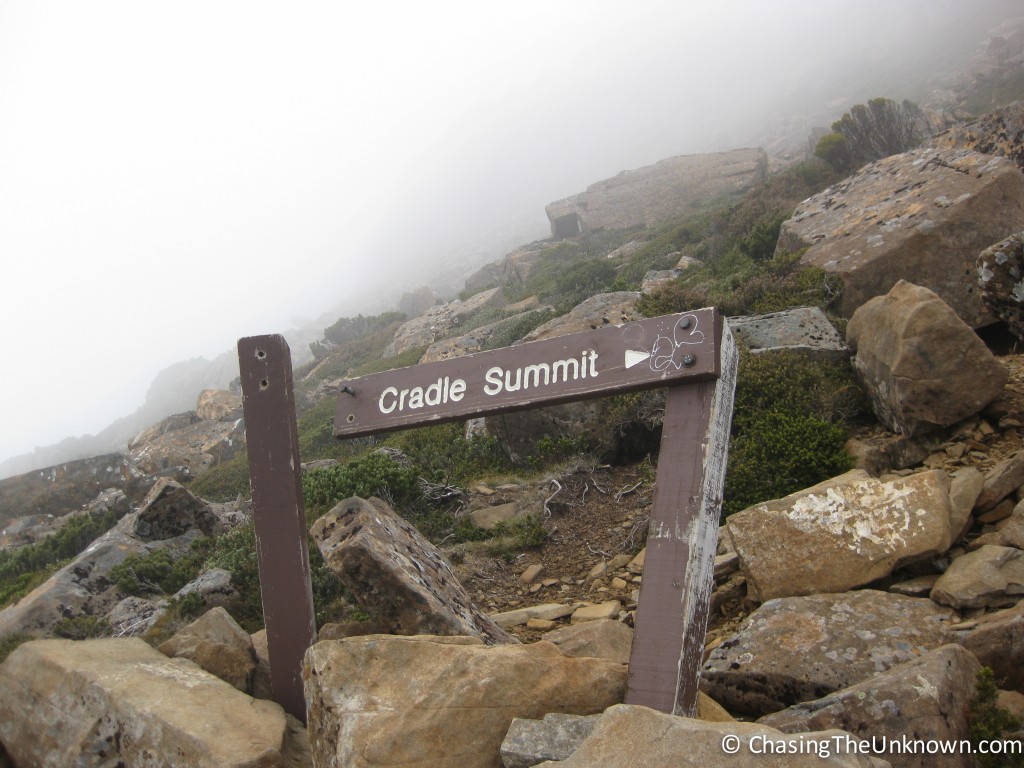 We looked to the right and saw nothing but mist. No signs of a path, no orange arrows or metal rods that would guide us up. But straight ahead, just to the right of that sign, we saw what appeared to be a path through loose rocks up to boulders. It was steep but we didn’t see any other option. So up we went. What followed was one of the most terrifying experiences of my life. Rocks slipped out from under me, tumbling down as I faltered to find footing without getting trapped by rolling stones. The wind pushed me around, gusts nearly knocking me off my feet. At times, my hands were flat against the ground as each step necessitated an accompanying handhold. Had I been alone, I would have turned back. More than once, I wondered where the other hikers had gone and why there were no trail markers. When my partner in this crazy adventure voiced the same concerns, we agreed perhaps the couple behind us had turned back, not wanting to tackle the climb in the ever-increasing wind. When we passed an overhang with flat rocks inside, we figured we were on the right track. The cave was obviously a shelter with places to sit, even a good surface to set up a camp stove. But then we reached the top – sort of. There were pinnacles to either side but no way to scale them without rock climbing gear and we couldn’t see a path in any direction. After a few minutes of looking around, I declared my intention to return to the cave and eat lunch. I was dreading the downhill and wanted a reprieve from the howling wind before braving it. 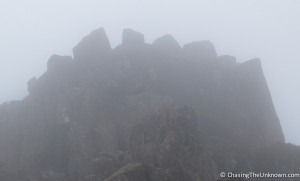 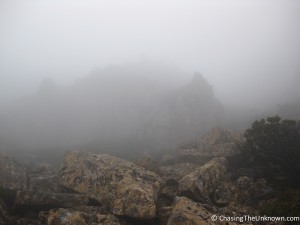 Amazingly, getting back down was easy. I found a path with fewer rocks and more dirt and although we dislodged a few stones, neither of us had an “oh shit” moment. And when we reached that sign pointing to the summit, two people approached from the now visible path: the one with metal rods marking the way off to the right. These two had set out just before me at Dove Lake but took an entirely different route so I hadn’t seen them since the first ten minutes of my hike. They’d gotten close to the summit but turned back on hearing reports of just how slippery the rocks were. The Aussie took off, eager to get down the mountain. I thought about trying again to reach the summit, taking the proper path this time. I went to the hut, had a snack, and mulled my options. But while I warmed up, I could feel muscles starting to seize and my knees begin to ache. So I headed down, over the arduous Face Track and past Lake Wilks to Dove Lake. As I descended, my hat and gloves quickly took up residence in my pack and I started peeling off layers. By the time I reached the parking lot, I’d caught up to my hiking buddy. When we turned to look back up at Cradle Mountain, the mist had blown off and although the sky was cloudy, the elusive summit was visible once more. 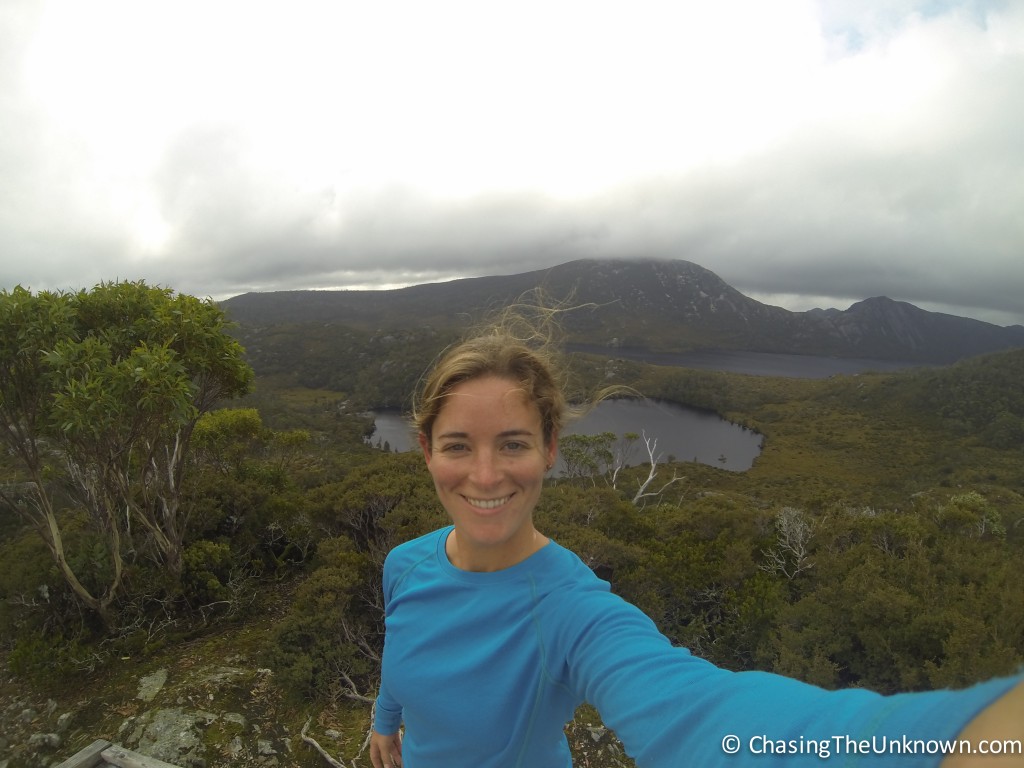 My legs are covered in bruises from the rocks that nearly trapped me or pushed me over, my knees made all sorts of horrible sounds for about 36 hours after the hike, and a fair amount of wine disappeared in my presence the night I finished. But I made it safely down and although I may not have reached the full summit, I’m satisfied with what I did. It wasn’t the smartest thing to be out there on my own or to pick my way up those small rocks toward the summit but I got lucky: I found company and I came out in one piece. If I return to Tasmania some day, I’d love to try again on a sunny day, perhaps with someone who’s hiked it before. Anyone want to join me?