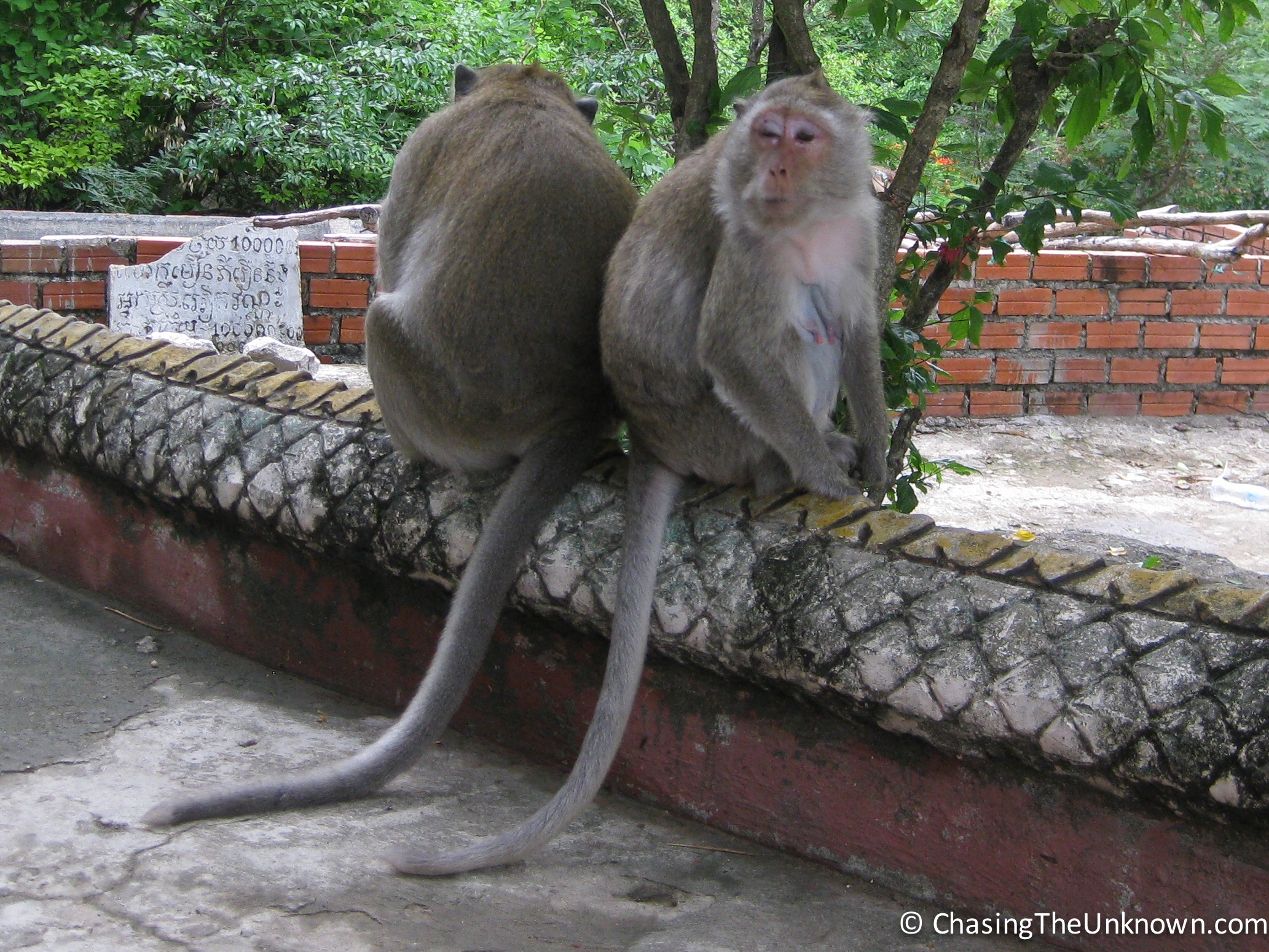 Although the bamboo train is perhaps the best known tourist attraction in Battambang, there’s more to this area than a bumpy ride along a narrow track. Two days is all we spent there and that was the right amount of time for us. We packed in quite a bit so these are just the highlights. If you’re heading to Battambang and want to know more, drop us a comment or get in touch.

No, we didn’t do any fishing in the Sangker River but we did stop to talk with locals casting nets, hauling their catch uphill, and subjecting it to a buyer’s scrutiny and scale. Fish is a staple of the Khmer diet so for those who live along Cambodia’s rivers, fishing is both a means of feeding your family and a money-maker. 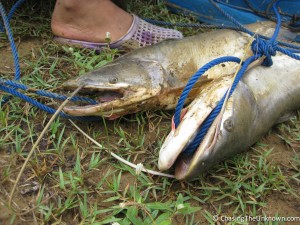 There’s only one winery in Cambodia and it’s run by a woman who learned wine-making from books. Banan Wine  produces red wine, grape juice, and a ginger-honey drink with a serious kick to it. Tasting all three costs $2 but two people can easily share one tasting. 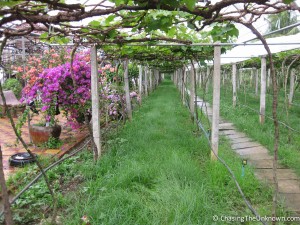 The wine is made from Shiraz grapes but it’s unlike any Shiraz I’ve ever tried. The nose is uniquely Asian and Jen and I struggled to identify anything specific in it. Our friends thought winter melon might be the strongest note but having never smelled or eaten one, I can only defer to their assessment. New Zealand this is not but I’m all for supporting a local business like Banan and am hopeful that the owner will bring in an experienced winemaker someday. Until then, I recommend drinking Banan Shiraz the way all red wine is served in Cambodia: very well chilled. 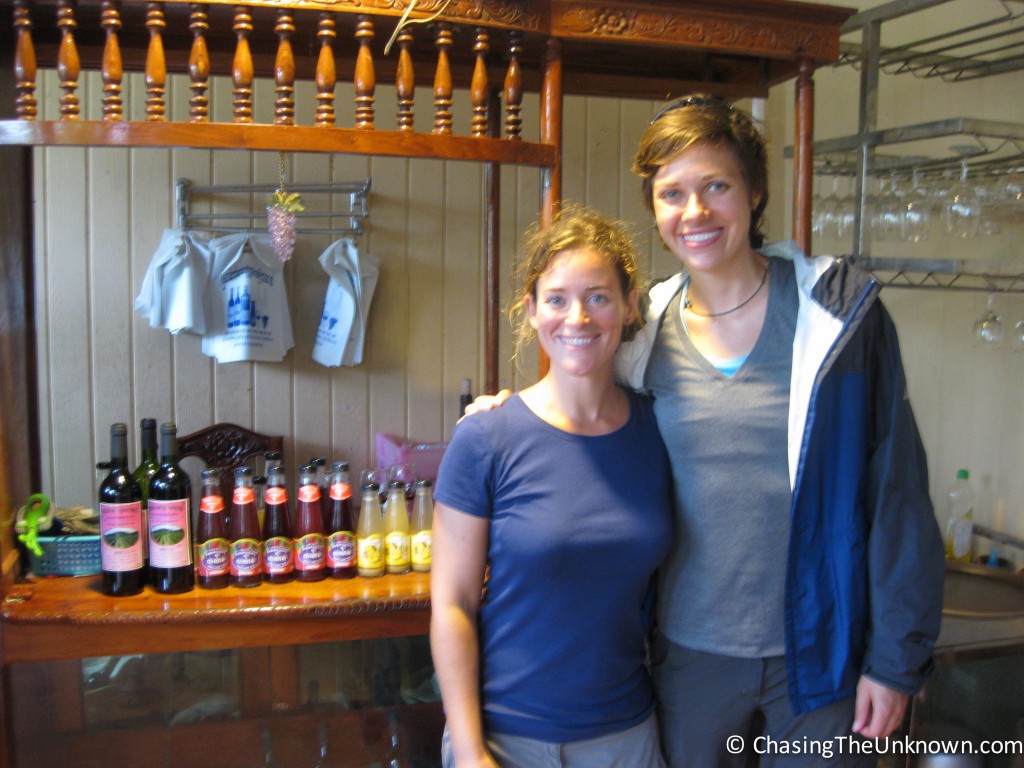 Fish paste and sauces are critical components of Khmer cuisine, appearing in nearly every dish, dressing, and table in the country. The pungent paste, prahok, is made from fermented fish and salt. The sauces, made with similar ingredients, are more mild and may be colored and flavored by various herbs or plants. When we pulled up to the fish sauce “factory” no one needed to announce where we were, the odor said it all. 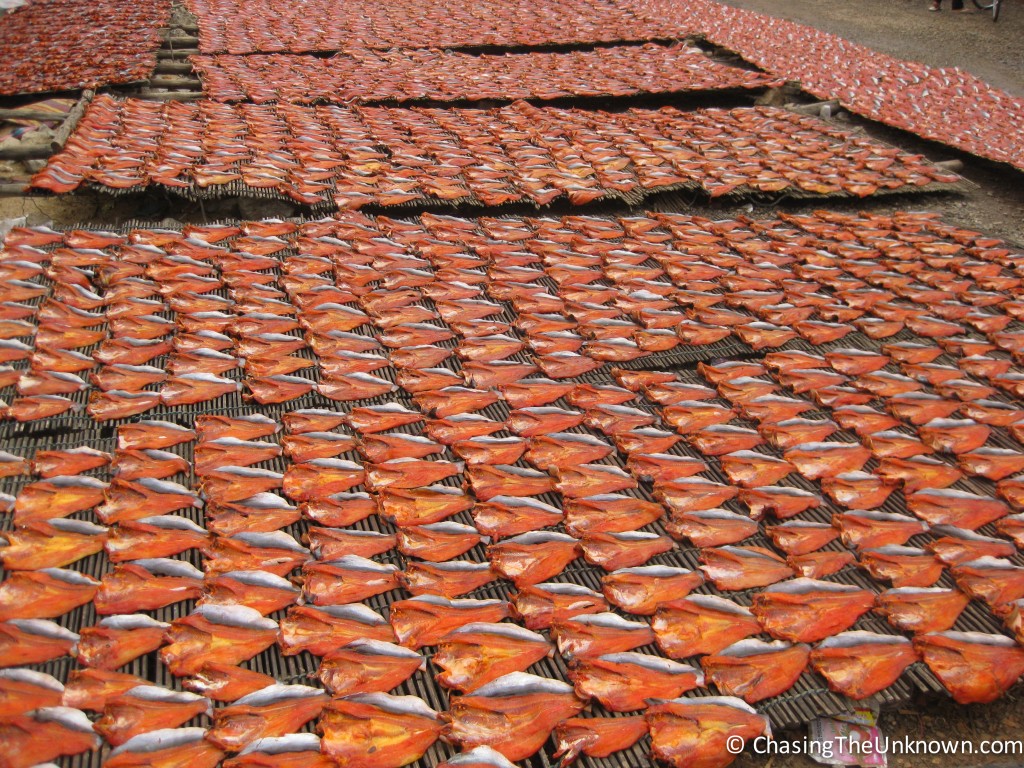 Despite our diving-honed mouth breathing skills, we didn’t last too long here. The flies, fish, and heat conspired to distract us from our driver’s description of the processes involved in making and selling fish sauce. I’m glad we went (and also that I decided to return to vegetarianism in Cambodia) but if you go, I’d recommend doing so when your nose is congested.

Bamboo sticky rice quickly became one of our favorite Cambodian snacks and a staple on our long bus and tuk-tuk rides. In Kratie, this snack is salty and savory but in Battambang, it’s mildly sweet. Sticky rice and a few beans are wrapped in banana leaf inside a piece of bamboo. Once cooked, everything but the bamboo is edible. Coconut shells and discarded bamboo are the only types of litter in this country that don’t bother me which is good because people regularly fling the bamboo husks from car windows, tuk-tuks, motor-bikes and their bare hands. 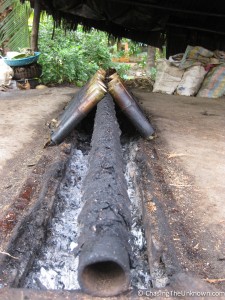 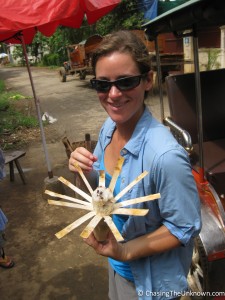 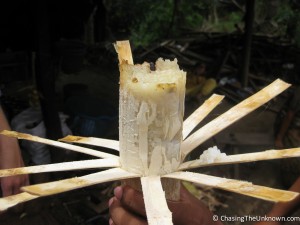 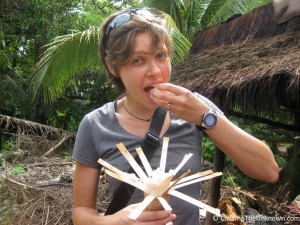 Fresh spring rolls stuffed with raw veggies are nothing new but here, the rice paper is handmade, not churned out in a factory. The process is simple but requires kneeling with two steaming pans, a fire burning nearby, and a very steady hand. If the weather cooperates and the rice paper dries properly, one team can make $20 worth of rice paper in about 10 hours. 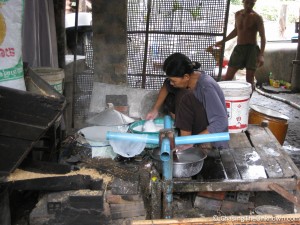 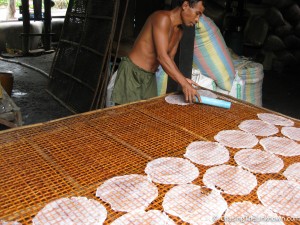 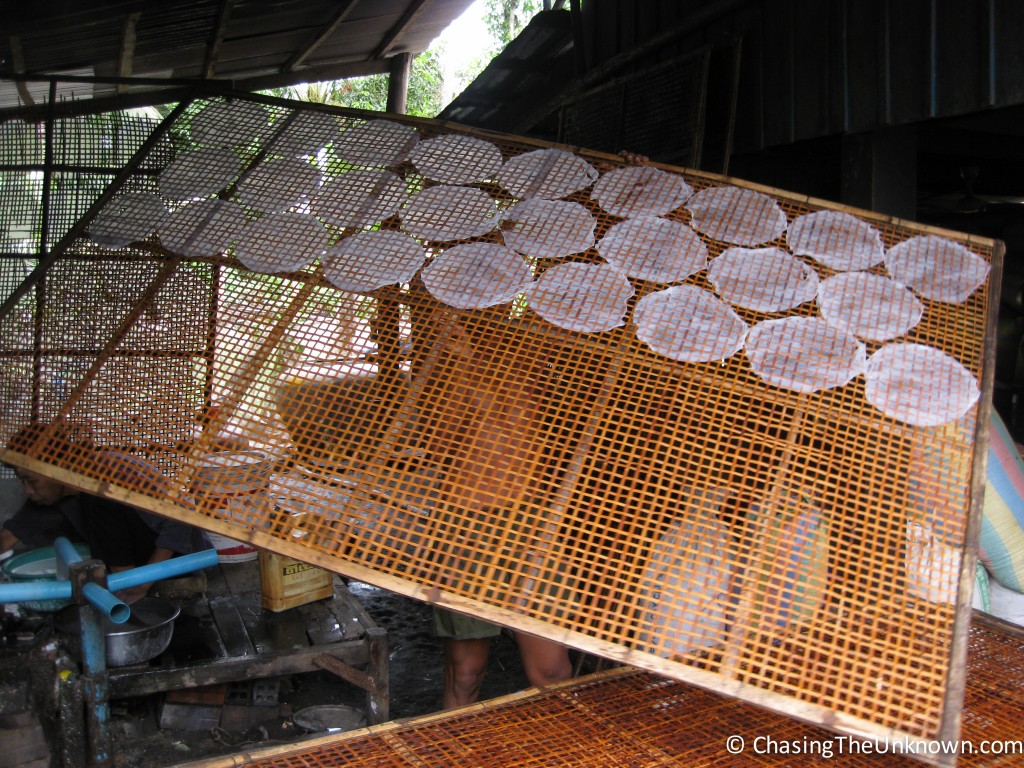 We had some pretty heavy rain during our stay in Battambang and, having taken a night bus from Sihanoukville, our energy levels were a bit low. As a result, we only made it to two of the three prime tourist temples: Wat Ek Phnom and Phnom Sampeau.

Phnom Sampeau is unlike the ancient temples of Angkor Wat. The active temple was built post-1980 and we saw more people begging here than at other temples. Atop a hill, the views are lovely and the macaques entertaining. Well-acquainted with the sticky fingers of monkeys, we kept anything easily snatched in our pockets and bags, cameras securely attached to our wrists. 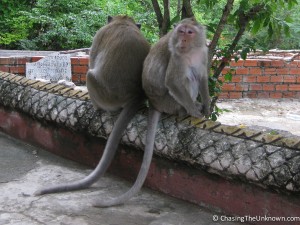 As in so many other parts of Cambodia, an emotional reminder of the Khmer Rouge era is impossible to miss and indeed, is the primary reason many tourists visit Phnom Sampeau. In the late 1970s, temples were destroyed, Buddha statues knocked over by soldiers trying to purge the nation of its past. Many temples and monasteries were used as prisons and relocation camps but here, a temple was built in the years of healing, an attempt to return beauty and peace to a place used for heinous acts. The killing caves here house cases of bones, the remnants of still more victims of Pol Pot’s genocidal reign. Standing inside this dark cave, staring up at the stone walls feels a world away from the monkeys and laughing tourists. But the two exist side by side, the past and the present.

Spirits lightened by a walk down the hill, we joined an ever-growing group of locals and foreigners milling about, waiting for dusk. Children played, backpackers swapped stories, tuk-tuk drivers napped. Inside the crevice of a limestone cliff, bats circled. Locals all had different estimates of what time the bats would start to come out so like many others, we waited, then waited some more. And as odd it was to spend an hour standing on the side of a dirt road waiting for bats, it was worth it. 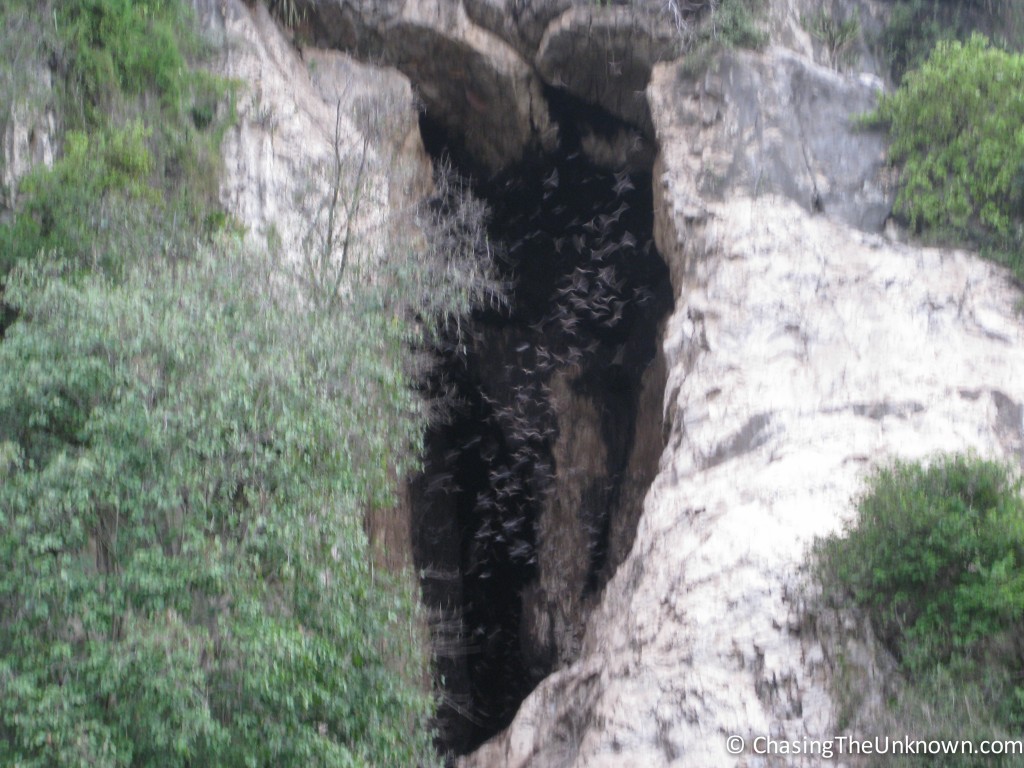 Just as many people were giving up and waking their drivers, bats began to peel off from the interior circle and fly away. Thousands more followed. Patterns formed, directions changed, the stream of bats flowed across the sky. 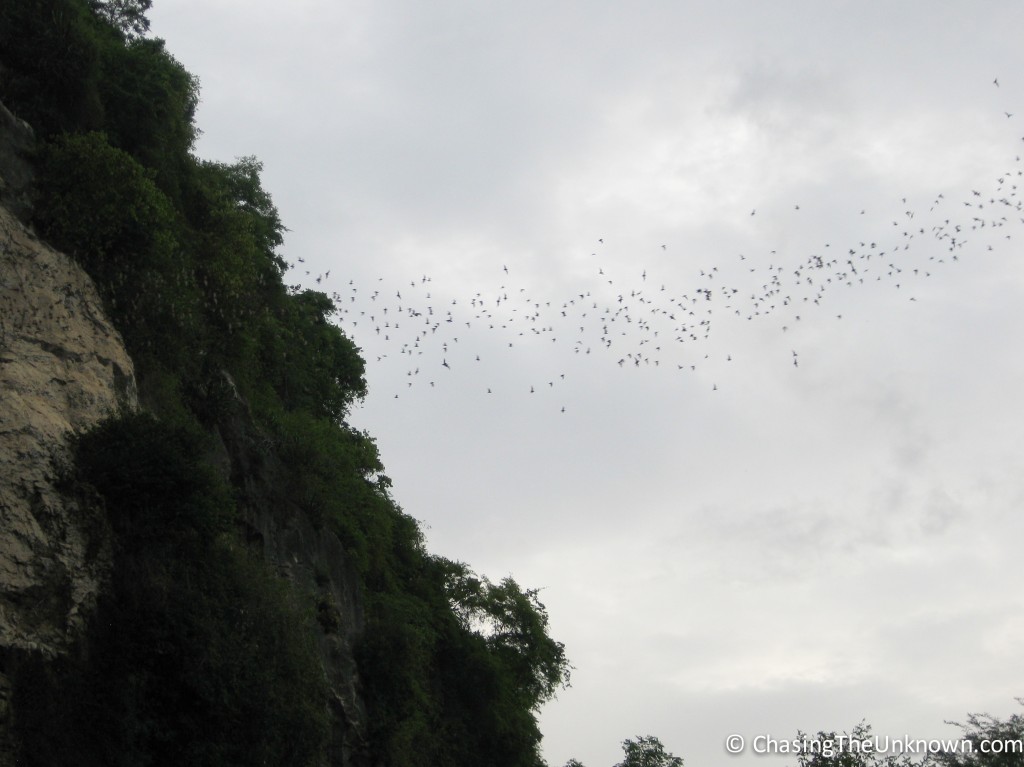 I don’t know how many bats we saw or where they went. Estimates range from tens of thousands to millions. As we drove away, clouds of bats formed, reminiscent of smoke or perhaps a swarm of very large insects. It was beautiful. Bizarre, but beautiful. 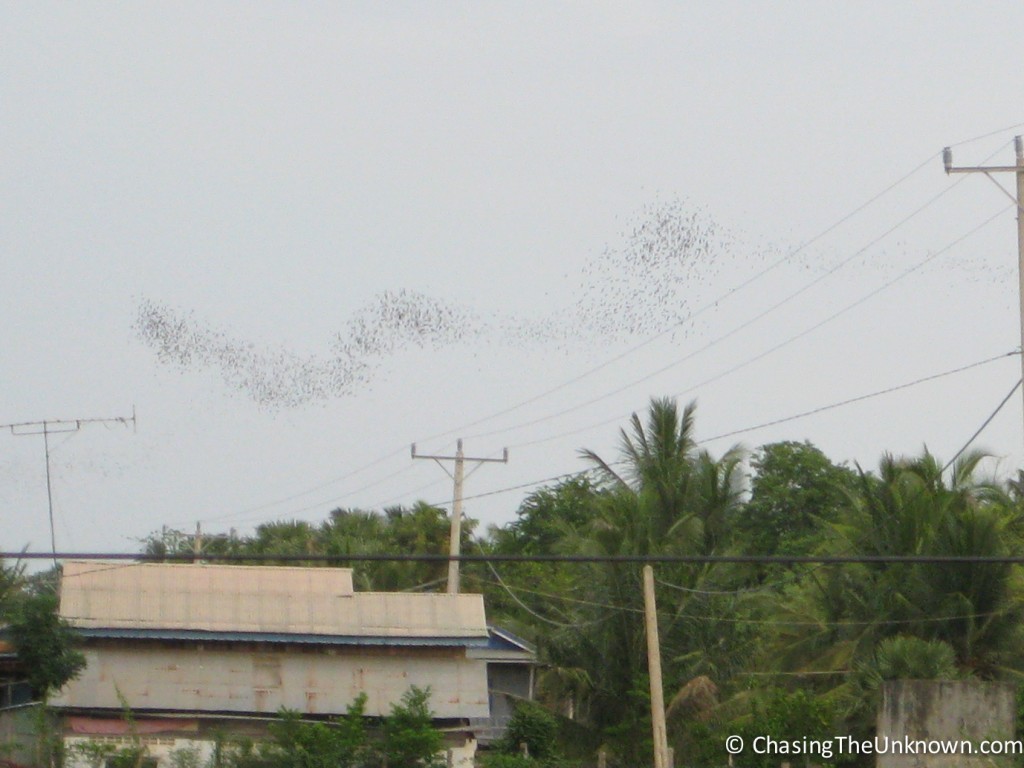 We hired the excellent tuk-tuk driver, Chin Chin, for our days in Battambang and when he wasn’t available, his nephew, Cambodia’s self-proclaimed “Best Looking Tuk Tuk Driver 2014,” took care of us. We highly recommend calling Chin Chin. His English is great, he has a wonderful sense of humor, knows the area like the native that he is, and charges a fair price. As of this posting, Chin Chin can be reached at +855 089 988 802.